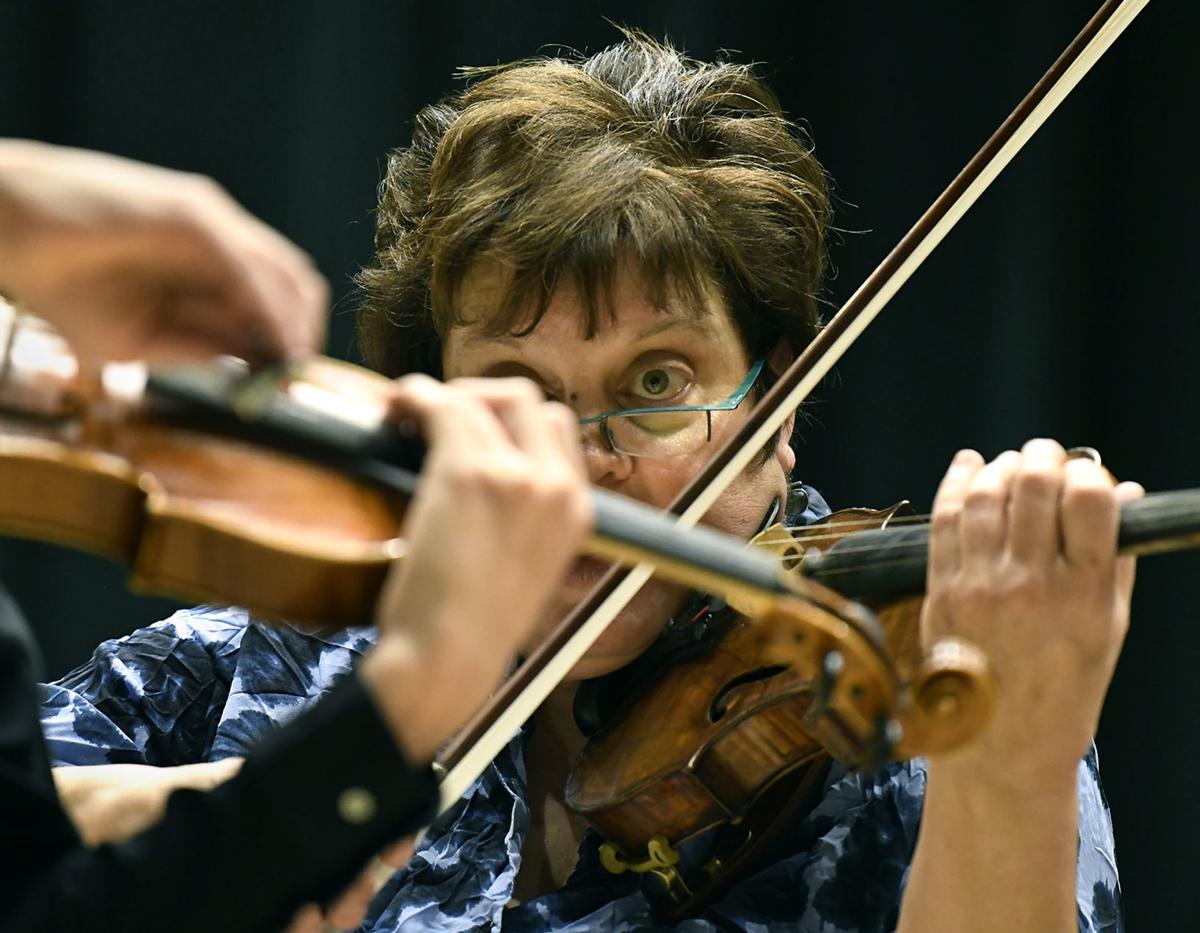 Jorja Fleezanis watches Gabe Kantor's hands as he plays violin during a masterclass Fleezanis held at the University of Montana's Music Recital Hall on Friday. Fleezanis, cited as a trailblazer for female violinists, taught the masterclass for several violinists before she leads the String Orchestra of the Rockies in its season finale on Sunday. 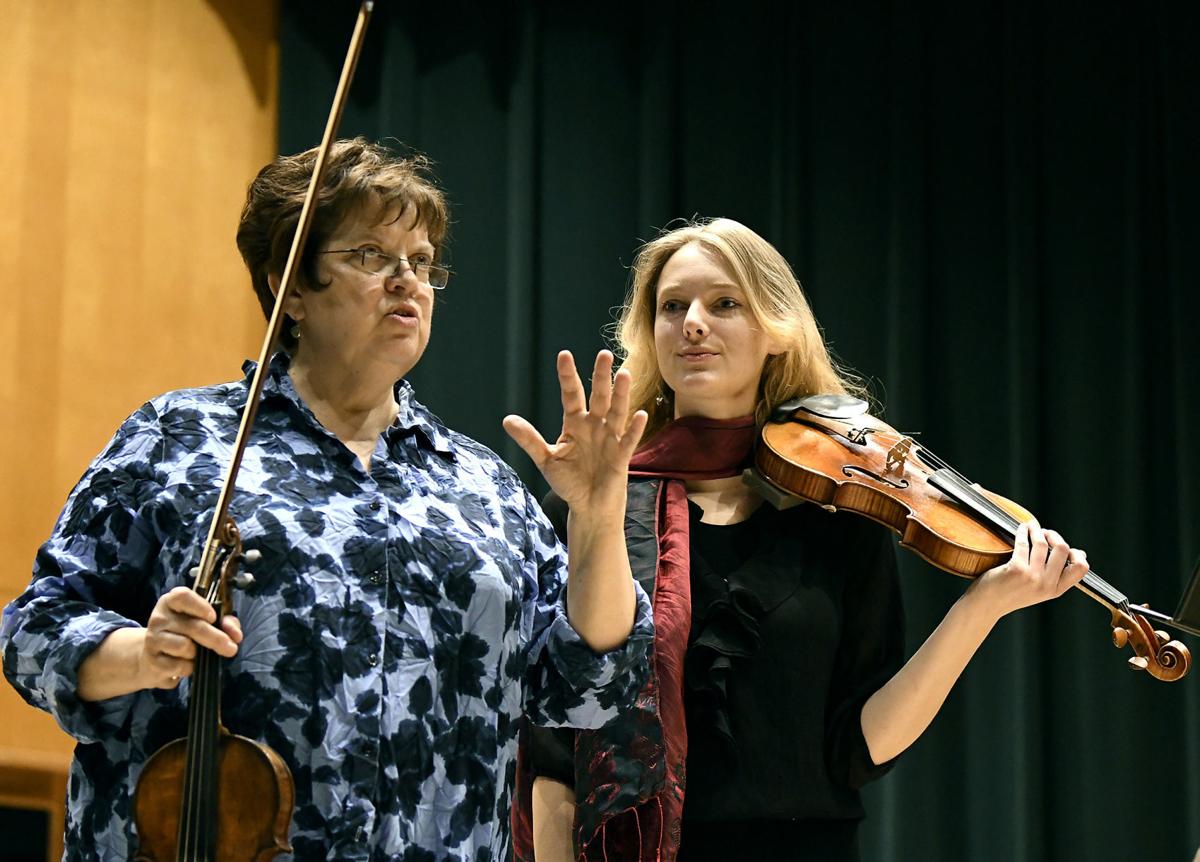 Fleezanis works with Kelaiah Horat, right, during the public masterclass at UM on Friday.

Before her turn leading Missoula’s String Orchestra of the Rockies on Sunday through its final concert of the season, violinist Jorja Fleezanis took some time to teach.

“Jorja has ties to Missoula,” UM Professor and SOR member Margaret Baldridge said. Fleezanis added from her seat: “From way back!”

Fleezanis used to visit to play in trios in Missoula and has had relationships with members of the String Orchestra of the Rockies for years. She served as concertmaster of the Minnesota Orchestra for two decades, before her current job teaching Orchestra Studies and violin at Indiana University.

Artistic Director Maria Larionoff called her a “mentor,” in a recent interview with the Missoulian, and cited Fleezanis as a trailblazer for female violinists.

Fleezanis arrived in Missoula early to mentor some additional violinists during a public masterclass held at the UM Music Recital Hall.

Kelaiah Horat played César Franck’s Sonata in A Major for Violin and Piano, and led a quartet for Beethoven’s String Quartet in C minor, Op. 18.

Larionoff had said of Fleezanis, “she’s really a take-charge person … I’m expecting her to just lead us,” and lead she did, during her individual lessons onstage in front of an audience scattered across the hall.

After Horat finished her first piece, Fleezanis bounded onstage to begin instructing, animatedly snapping with the beat and insisting phrases be repeated until correct, like one passage where Horat’s bow work wasn’t creating the correct volume.

“Alright, so you went for poundage-per-square-inch,” Fleezanis said after Horat gave a particularly strong rendition. “That’s a common misconception.”

It is possible, she said, to play loud, without being overpowering. After Horat’s mastery of the section, Fleezanis praised her.

“I love that, you know why I love that?” she said. “The sound is ringing on the end of each note.”

The last violinist, William Cook, was taught the opposite lesson. His rendition of “Fratres,” an ambient, somewhat experimental piece included phrasing that was too loud, Fleezanis thought.

She asked Cook to start at the beginning again and build up a series of arpeggios from pin-drop quiet to rollicking. The audience clapped at his improved recitation, bringing a smile to Cook's face.

Fleezanis tuned her instruction from student to student, patiently joking with Gabe Kantor, while not mincing words with the quartet led by Horat.

“Without a thumb, we’ve got nothing,” she told Kantor, while asking him to adjust his finger position. “You’ve got a great thumb, there’s a lot of meat there.”

Fleezanis cracked herself up with that one.

But, to the quartet later, she asked for repetition of a phrase and they awkwardly started off time.

“OK, what are you doing?” Fleezanis asked.

“You’ve gotta look up,” she told them. “This is a human experience. You’re playing together.”

Printmaker Max Mahn, who's known for his gig posters, will create imagery for the craft brewery's 2022 Off-Centered Art Series beers.

After 18 years, Tom Bensen is planning to retire from his post as executive director of Arts Missoula, the nonprofit local arts agency.

Artist's collages are 'a secret garden' with a bright palette

The bouquets, in a collage of techniques and hot palette, explore questions: “What do you want to do in the later years of your life? Is that really what you want? Have you taken any steps to get there?”

Here's a quick guide to some arts and cultural events happening in Missoula in the coming week.

"God's Country," a feature film based on a short story by Missoula author James Lee Burke will premiere at Sundance Film Festival next month with Thandiwe Newton (“Westworld”) in the lead role.

Whitaker’s style is abstract expressionist in the tradition of Jackson Pollock. The canvases are covered corner to corner with paint — flung and dripped.

Assembled by his longtime poetry publisher, Copper Canyon Press, the tome collects all 14 of Jim Harrison’s published books of poetry.

Jorja Fleezanis watches Gabe Kantor's hands as he plays violin during a masterclass Fleezanis held at the University of Montana's Music Recital Hall on Friday. Fleezanis, cited as a trailblazer for female violinists, taught the masterclass for several violinists before she leads the String Orchestra of the Rockies in its season finale on Sunday.

Fleezanis works with Kelaiah Horat, right, during the public masterclass at UM on Friday.