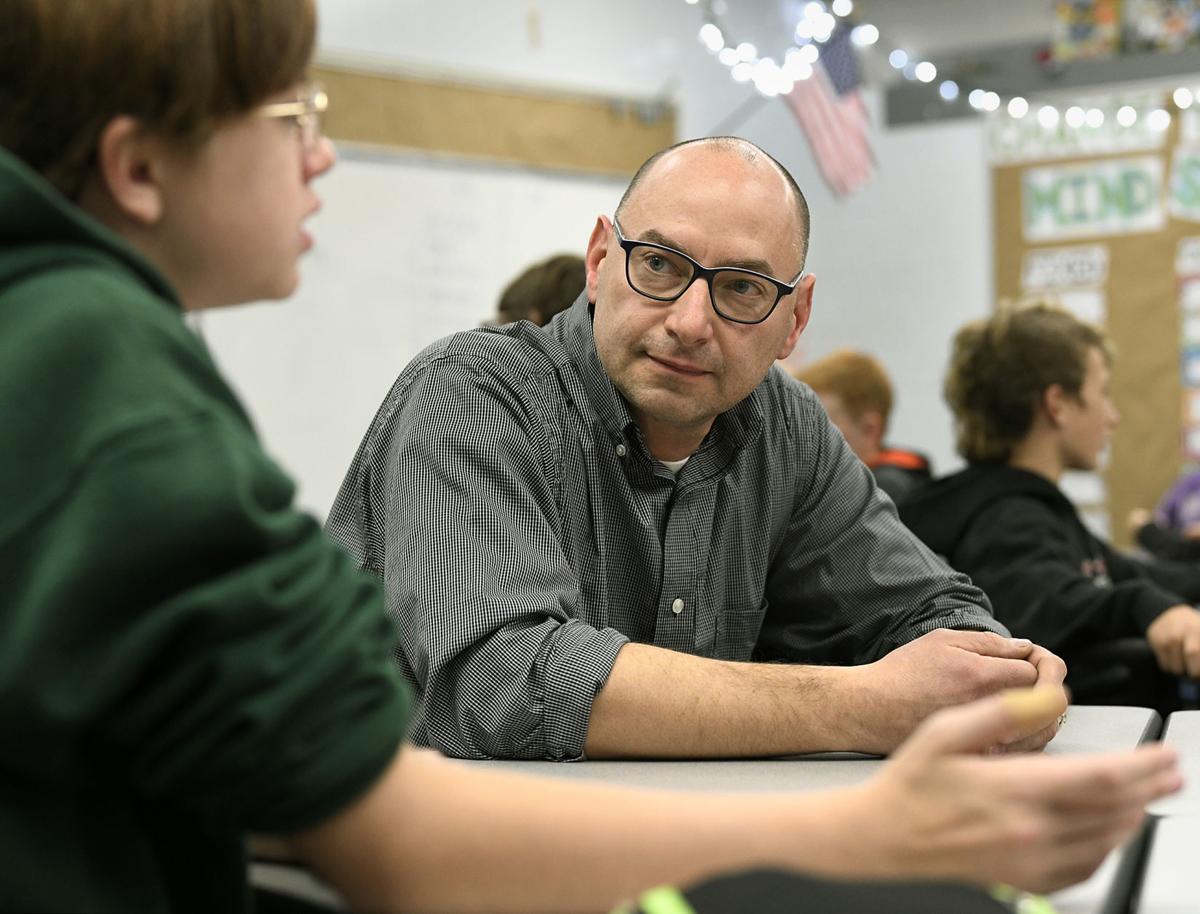 Marc Moss, the host of Tell Us Something, listens as seventh grader Peyton Hansen tells a story during class at C.S. Porter in 2019. 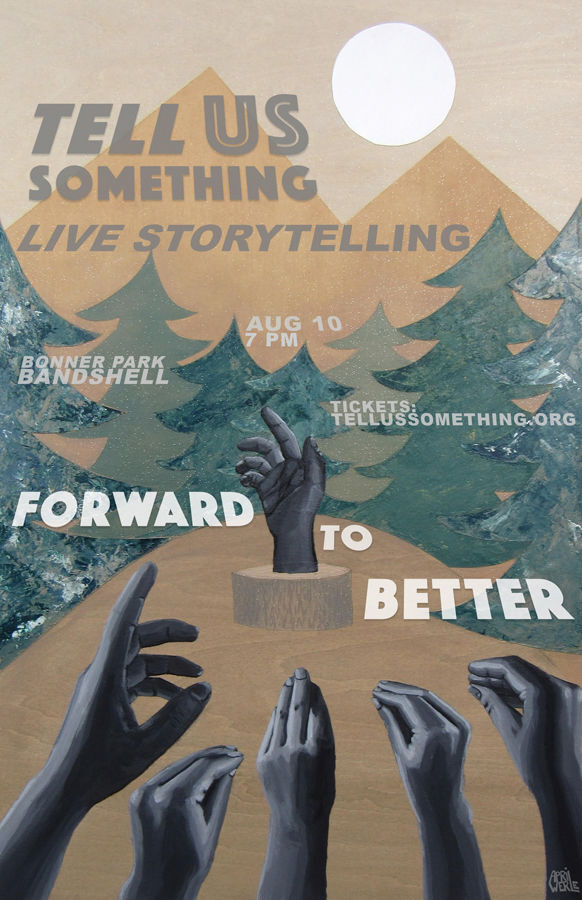 The Tell Us Something quarterly storytelling event is returning on Tuesday, with a theme of “Forward to Better.”

It’s a classic-style TUS event, “it’s moving and touching and what you’ve come” to expect, said Marc Moss, the director and host.

As in the past, you’ll hear true stories, 10 minutes each, delivered by community members, without notes. There are seven stories and eight storytellers, as one is told by a two-person team.

It’s the first event for Tell Us Something since February 2020, and the theme reflects the idea that things aren’t the same, but that old normal wasn’t working for everyone. Moss said it may take time to rebuild the momentum they had.

“Now more than ever, people need stories,” he said. They’re a “way to understand the world and also to heal our hearts and heal ourselves and our communities and our world, and I think Tell Us Something is going to be more important than it ever has been for those reasons.”

It’s a seated event with 500 tickets total and just over 100 available earlier this week, outside at the Bonner Park Bandshell instead of its usual home in The Wilma. Moss isn’t sure whether it will be the only in-person event for the year, depending on the shape the pandemic takes.

“There’s just so many unknown variables,” he said.

They may use time to develop the organization, do outreach, and likely have streaming events over the winter.

Moss has also been preparing to convert Tell Us Something from an organization with a nonprofit fiscal sponsor (the Missoula Community Foundation), into a standalone 501(c)3. It was started as an informal storytelling night in 2011 that was later handed over to Moss, who has been running it himself with a loose advisory committee.

The events require not just recruiting people to tell stories, but holding workshops to help them on their writing and delivery — they have 10 minutes to tell a story without notes.

“In order for the organization to be sustainable and to grow, I can’t do it by myself any more,” Moss said. It needs a board to help guide it and recruit storytellers, for instance."

He had a full board lined out as of December 2019. “After the events of 2020, I looked at that board and noticed that they’re all white and most of them are men,” he said. So he started over, and now has a board that is mostly Black, Indigenous or people of color (BIPOC) save for one. They’ll introduce themselves at Bonner during the event.

The board members have already recommended some adjustments, such as paying the board members a small stipend for their time at committee or official meetings, Moss said.

There will be American Sign Language interpreters at the event, as they’ve done for years now. The price is $15, based on a survey of longtime supporters. Go to tellusomething.org. They’re working on getting some food trucks lined up, too. People can show up starting at 6 p.m. and the show starts at 7.

Ballet Beyond Borders connects the world through dance

When words fail, dance is there to connect people at an emotional and spiritual level that transcends culture and language barriers, as seen y…

Olympics posters: Iconography, history of the games on display

Reacquaint yourself with the phenomenon of the Olympics through its posters, which tell its history and its iconography.

The infrastructure in “Paradise City” doesn’t build itself.

‘Playboy’ names Cardi B its first-ever Creative Director in Residence

‘Playboy’ names Cardi B its first-ever Creative Director in Residence

Marc Moss, the host of Tell Us Something, listens as seventh grader Peyton Hansen tells a story during class at C.S. Porter in 2019.