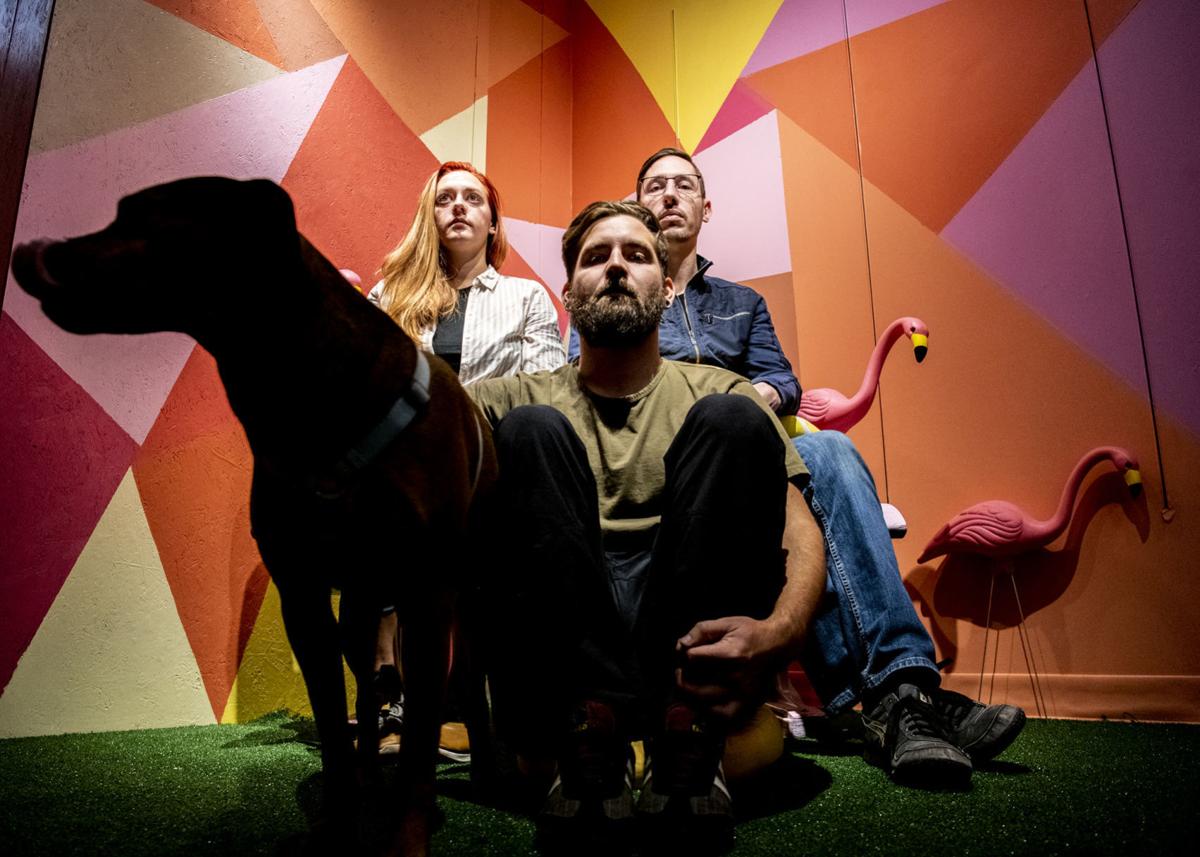 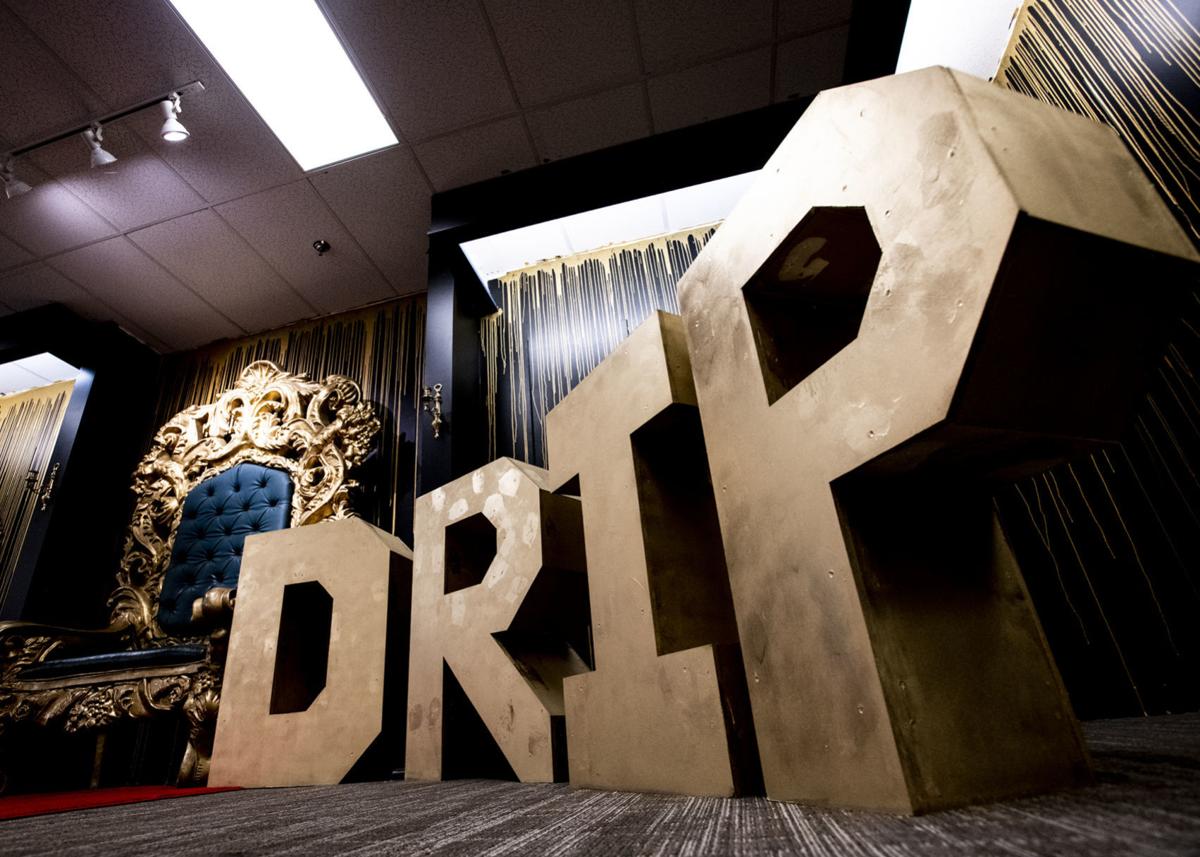 The second floor features a space called "Drip," with block letters and an old Santa chair used at the mall for Christmastime photo-ops. 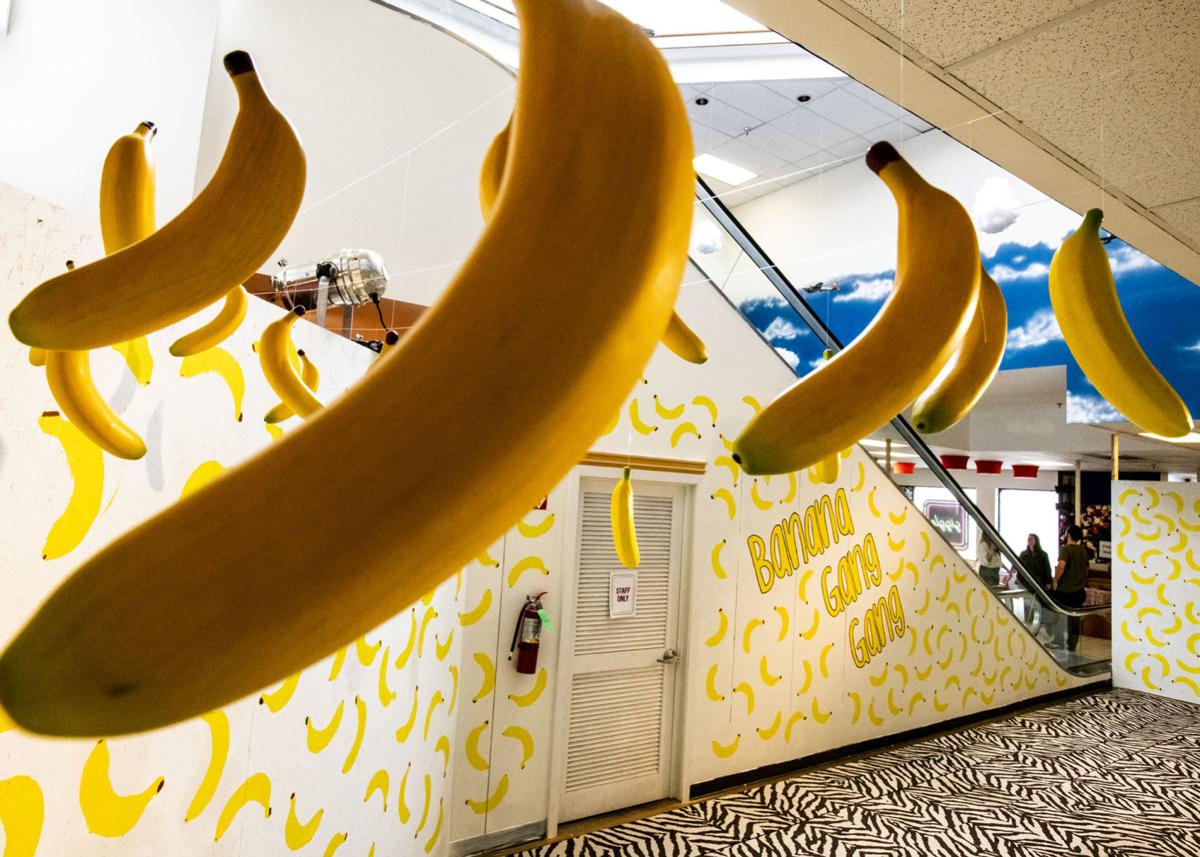 The first floor, which begins with a banana-themed room, features 11 individually designed spaces.

After three and half weeks of nonstop construction and preparation, The Giggle Box, Missoula’s first immersive, interactive art museum, is open to the public. Last Saturday, more than 200 fun-seekers got a sneak peek at the photo-op attraction during an open house, and organizers said their wacky creation did not disappoint.

“One of the coolest things that I found from our open house was that when I was kind of just casually surveying everybody about what their favorite room was, I didn’t get the same answer twice,” said Michael Gardner, one of the Giggle Box organizers, along with Logan Foret and Tanya Yarrow.

The trio is the team behind local production company BFK Presents, which has hosted multi-day festivals and one-time events like Disco Bloodbath, Socotra and The Silver Cloud Campout. Over the last month, they’ve transformed the former Herbergers in the Southgate Mall into an artsy, two-story funhouse for a six-month run that will last through August.

When you first arrive, the Giggle Box team explains how the museum works and provides you with a map to help you navigate the rooms and experiences.

With 25 “activations,” or themed rooms and areas of the museum, there is something for everyone, Yarrow said, adding each “activation” has four to five experiences within.

The first floor features 11 separately themed rooms, while the second floor is a larger open space, with several “activations” and experiences along the walls and a large circular DJ booth as the centerpiece.

On the first floor, the “Grandma Knows Best” room is an explosion of trinkets and treasures that you’d find in, well, your grandma’s house.

“There’s all kinds of crazy, little compartments and things that you can open up that have stuff behind them, little secret things all over the place,” Foret said.

“Art Isn’t a Crime,” transports you to an urban park setting, with graffiti art on the walls, lighting that creates a nighttime setting and hip-hop music in the background.

Foret said the room is an ode to his hometown of Chicago and the hip-hop music he listened to growing up there. A break dance floor in the corner invites visitors to show off their skills.

“We definitely want people to have a lot of fun with it,” Yarrow said. “On Saturday, we had people doing acro yoga in the ‘This is Bananas’ room. It’s kind of like a playground.”

One of the more eye-catching items in the room is a larger-than-life traffic light that Foret said they found in Jacksonville, Florida.

“We actually rummaged the entire country,” he said. “We were gone for six weeks basically collecting different materials and things like that around the country while our walls were being put up.”

On the second floor, an area called “Drip” features an enormous throne that some Missoulians might recognize as the old Santa chair the mall used for Christmas photo-ops. Foret said they felt they had to include it after they found it dusty in a mall storage room.

All told, he estimated 95% of the materials used throughout are upcycled.

“That’s a major difference between us and a lot of the similar museums,” Foret said. “We’re a small grassroots company and everything, for the most part, is upcycled materials that we found at thrift stores, antique shops, or that we found in storage at the mall.”

The organizers are quick to set themselves apart from similar, but much larger museums like Meow Wolf in Santa Fe, New Mexico, which has a budget in the millions and took years to construct.

“We visited a ton of these different interactive museums around the country and sort of figured out what we think will work in this market. One thing that is really special about what we’re doing is there’s a level of intimacy when you come,” Foret said, adding when you purchase a ticket, you get a time slot. “Every 15 minutes there’s a group that can come in, in groups of six, so essentially you and your friends get the museum to yourself when you book it.”

Organizers said staggering the groups allows you to feel comfortable taking photos and being silly and weird with your friends. All of the rooms are meant to provide interesting and fun backgrounds for photos and videos on social media.

“Everything we’ve established, essentially 90% of it’s made to be Instagrammable, Facebook-worthy,” Foret said.

The “Don’t Hassle the Tassel” room and the “Samour Wall” are particularly set up for the boomerang feature on Instagram, Yarrow said.

In addition to rummaging, they enlisted local artists to create the various themes you see throughout the museum.

“What we did was we brought in artists, let them kind of tour the facility and then say, come up with an idea and come back to us,” Yarrow said.

A few of the spaces, which organizers referred to as the “tech rooms,” feature black lighting, lasers and seemed to be some of the most impressive “activations” for many of the open house attendees.

“Obviously the tech rooms are really crazy just because it’s something that most people don’t normally experience,” Yarrow said.

If you’re brave enough to walk through a Port-O-Potty door into darkness, you’ll experience “Dimension 1.5.” As you enter the pitch-black room, you’re not sure what you’re going to encounter. Then you see the lasers.

In this “activation,” you can press buttons to change the color scheme of the lights or stand in front of a set of laser beams that will mirror your movements.

“This was a hot spot on Saturday, for sure,” Yarrow said. Another tech room called “Plant Aura” uses a projection and sensors to create a custom digital plant for each visitor.

Organizers pointed out The Giggle Box is family-friendly and they saw several kids finding their favorite areas of the museum at the open house.

“Nothing But Blue Skies” is somewhat geared towards a younger audience and Foret said the space was one of the family favorites.

“There’s a teeter-totter, people can stand with their littles in front of the wings behind you,” he said, pointing to angel wings on the wall painted at child-level. “The kids that were in here on Saturday were having a blast.”

The Giggle Box is ADA-accessible and they’re working to attain a national certification as a sensory museum for people with post-traumatic stress disorder or who are on the spectrum and need sensory activities.

In addition to being a walk-through museum, the Giggle Box plans to host events including comedy nights, company team-building, birthday parties, burlesque and drag shows, album releases and concerts for local bands. The upstairs DJ booth will host electronic music events and a stage in their lobby area can be used for everything else.

And while the mall closes at 10 p.m. most nights, Foret said they’ll be able to utilize a loading dock in the back as an entrance for after-hours events.

“It’s a secret entrance, people can come in and we have a big freight buzzer back there, so they can actually buzz themselves in and we can even do it speakeasy-style, where there’s passwords and things like that,” he said.

The sky seems to be the limit for the Giggle Box, as they’re already thinking about the possibilities of changing and modifying rooms as time goes on. But as a six-month pop-up, they’re sifting through ideas to figure out what can be done in that timeline.

“We’re going to see in chatting with guests what rooms that they really connect with and maybe what rooms weren’t their favorite and try and do some interchanging stuff,” Foret said, adding there’s an additional 2,000 square feet they could add to as well.

The team said the Garden City and the artistic, creative community that lives here are a good fit for a project like The Giggle Box.

"Because it’s Montana’s first, and Missoula’s kind of known as the 'weird' town in Montana, we just wanted to go full circle with it," Yarrow said.

The Giggle Box is located in the former Herbergers in Southgate Mall and is open Wednesday-Sunday from noon to 9 p.m.

Tours begin every 15 minutes and are limited to groups of six to ensure a private, calm experience. Plan to arrive at least five minutes before your scheduled tour time and allow for 60 minutes to tour the entire space. Tickets cost $15 per person online or $50 for a group of four. At the door, tickets cost $20 per person.

• Children under the age of 4 are free and do not require a ticket.

• All guests under the age of 14 must be accompanied by an adult.

• Tickets are non-transferable and non-refundable and tickets purchased through third parties will not be accepted.

• Based on availability, there will be a limited amount of tickets at the door.

For more information and to purchase tickets, visit thegigglebox.net.

Chris Maynard: Fascination with feathers leads to advocacy through art

Maynard's shadow box featherwork is on display at the Radius Gallery as part of their exhibition, “This Universe is You,” which has a design-oriented focus.

Here's what's happening in live music around Missoula this weekend.

Bands from around Montana and a few guests from Seattle are descending on Missoula March 21-22 at four venues for the Big Sky Django Jazz Festival, where they'll help keep the tradition of the guitarist's Hot Club-style jazz alive.

“By lifting the size restrictions, it really opened it up to more artists being able to submit and I think it gave us the best show that we’ve ever had,” said ZACC Executive Director Kia Liszak.

The second floor features a space called "Drip," with block letters and an old Santa chair used at the mall for Christmastime photo-ops.

The first floor, which begins with a banana-themed room, features 11 individually designed spaces.