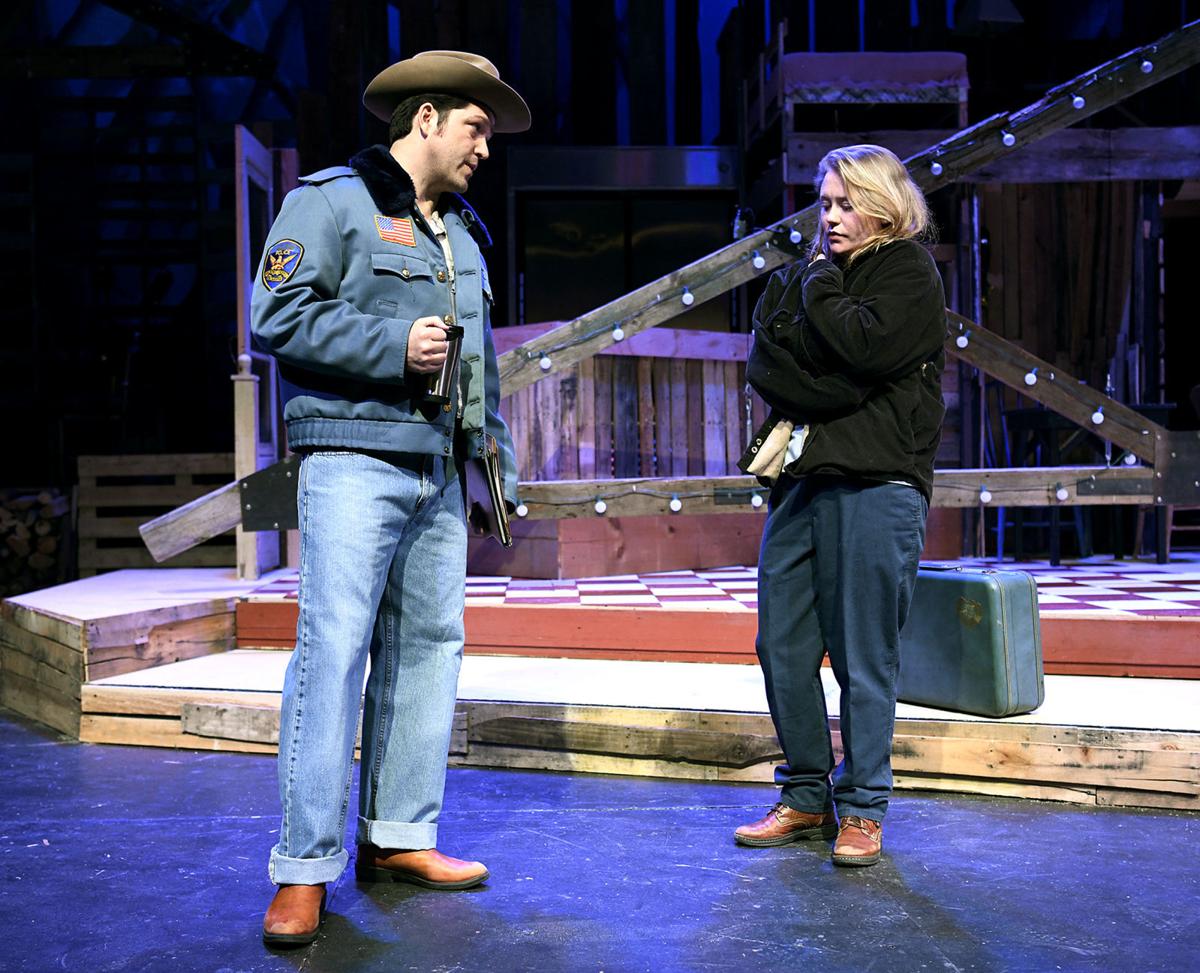 Miles Barnum and Brit Garner rehearse a scene from Missoula Community Theatre's production of "The Spitfire Grill." The plot of the musical follows Garner's character, Percy, a young woman recently released from prison and trying to start a new life in a small Wisconsin town. 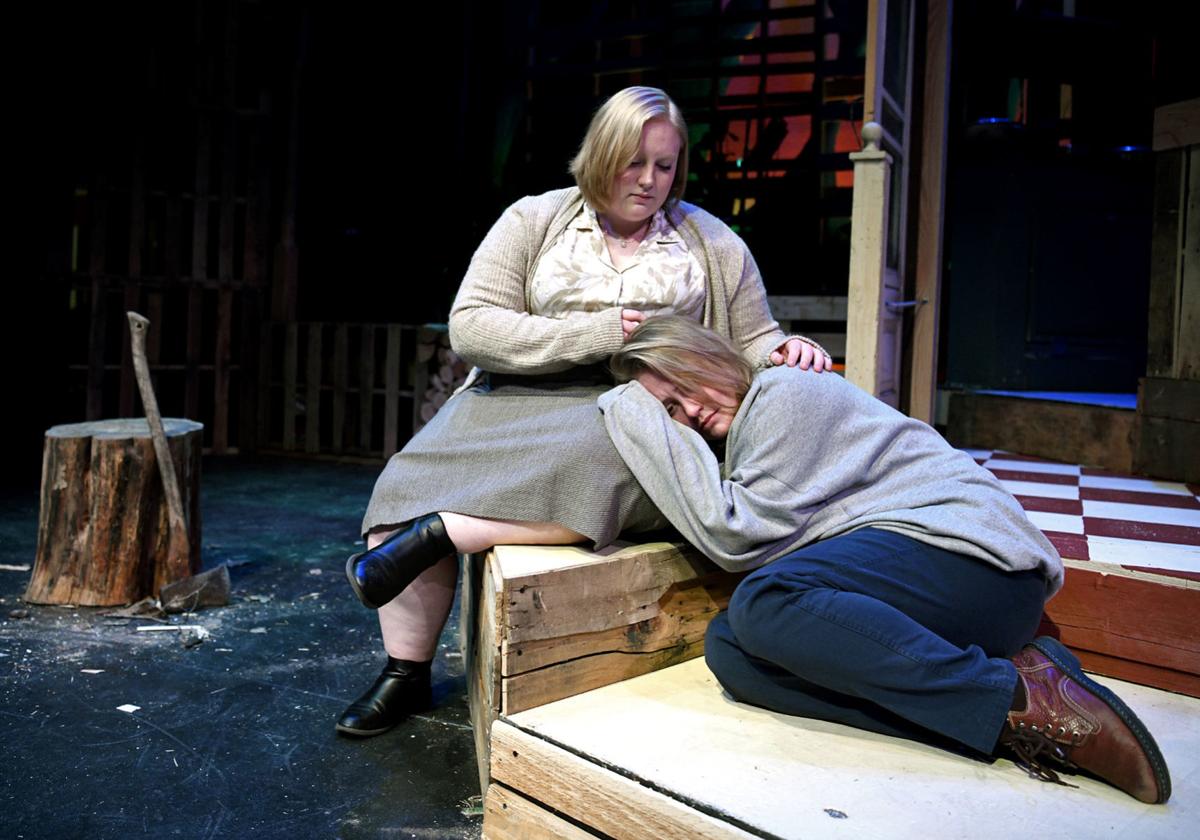 Jalynn Nelson, left, and Brit Garner are among the cast of "The Spitfire Grill." 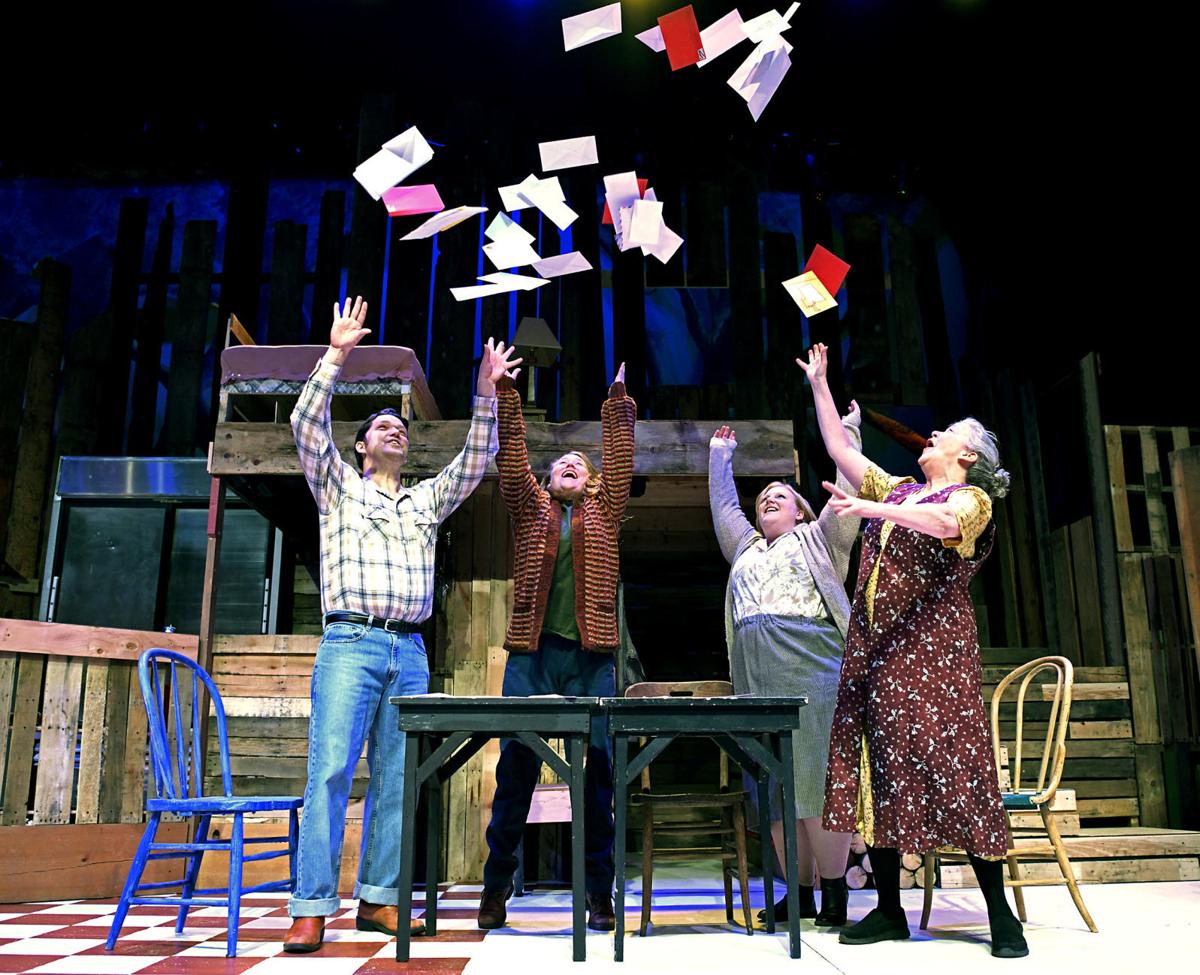 Miles Barnum, Brit Garner, Jalynn Nelson and Colleen Watson, from left, rehearse a scene from "The Spitfire Grill." The small cast is a change from Missoula Community Theatre's bigger productions, and cast members have had more time to explore the characters.

In a show that’s small in cast members but big in heart, Missoula Community Theatre’s upcoming production of “The Spitfire Grill” is a unique opportunity to see a musical unlike the mainstream.

The relatively unknown show runs March 5-15 (see box for details) and features a cast of only seven members and a folksy, Americana orchestration rarely heard in the world of musical theater.

MCT has been talking about doing the show for several seasons and finally felt it was the right time, said artistic director Joe Martinez, who’s also directing “The Spitfire Grill.”

“We do really big shows and titles that people know, so it’s nice to throw in a title nobody knows and hopefully people walk away with a sense that they found a new favorite show,” he said.

The plot follows Percy, a young woman recently released from prison, as she tries to leave her past behind and start a new life in the small town of Gilead, Wisconsin. She gets a job at a struggling local diner and meets a cast of characters in a town that’s also fallen on hard times. In a story of self-discovery and redemption, Percy comes up with an idea to try and save the diner and herself along with it.

The piece is based on the 1996 film of the same name by Lee David Zlotoff, with music and book by James Valcq and lyrics and book by Fred Alley.

Martinez said the show’s music is what first caught his attention, adding the songs are really what drives the story line.

“A lot of what tells me how the show feels is just the instrumentation of the show,” he said. “Right away the music was just so beautiful and haunting.”

Despite its lack of name recognition, Martinez had 50 people show up to audition for seven roles, which he said is a testament to the talent in Missoula.

Brit Garner, a fish and wildlife biology doctoral student at the University of Montana, is playing the lead role of Percy and said she also hadn’t heard of “The Spitfire Grill.”

“I heard the first song and thought, this is different. This is folk, this is Americana, there’s an accordion?” she said. “It’s a seven-person adult cast, which is also really appealing.”

She was drawn to the bluegrass, “gather ‘round the campfire” feel of the music in the same way Martinez was.

“The actual melodies are written within a more classic folk style, which our ears are not used to that within musical theater. There are very few shows that have done that,” she said.

Garner, who is originally from Florida, has used theater as a creative outlet outside of school to balance out her academic work in the sciences, so when she moved here five years ago, one of her first stops was at MCT.

“I knew that the thing that makes me feel like home is finding whatever the theater is,” she said. “All of a month after I moved to Missoula, I auditioned for ‘Jekyll and Hyde’ the musical at MCT and found my nice little second home here.”

She joked with Martinez about how it’s the first role she’s had with MCT where she didn’t have to cover up her tattoos.

“I remember texting Joe and being like, ‘Joe, does this show actually have a female lead with tattoos? I’m going to save so much money on cover up,’” Garner chuckled.

Most musicals have casts of around 40 to 50, so with seven actors in this musical, Martinez said they were able to really dig deep into the script and explore the characters.

“We have time to sit and talk and to ask questions and to discuss scenes and even discuss, ‘Where do I take a beat or a pause in my line for more effect?’”

Garner’s ability to truly embody the characters she plays is part of the reason she ended up with the role, Martinez said.

“She’s done her research, she goes through the script and finds intentions and motivations,” he said. “Vocally it’s a really straining role. It’s a big sound that needs to come out of this character just vocally and Brit has that too.”

Because they were able to take time to explore the characters, Garner said the audience is going to be able to really get to know these individuals at the Spitfire Grill and in the town of Gilead.

“The idea of letting go and saying, ‘I am good’ or ‘I can be good’ is something all of the characters in the show and the town have to do,” she said. “They get to those places throughout the course of the show and some maybe more than others and maybe each audience member sees a different character journey that they connect with.”

As the play moves along, you start to see that Percy, the characters and the town are all struggling with the same thing.

“Percy, the town and everyone else is asking themselves ‘Who was I? Who am I? And who do I want to be?’ she said. “The idea of maybe starting again for Percy let’s her ask that question, and then for the town of Gilead, having Percy come there makes them pause and ask that question.”

While there are some heavier and painful themes throughout the plot, Garner said redemption is the main takeaway of the story.

“I think redemption is an undeniable theme of this musical because of the way that our past can color the way we think of ourselves and the self-hatred and shame that can come with things we have done,” she said. “Whether they’re small or big, everyone has their own journey in that regard, but we can really beat ourselves up.”

Looking back, Garner said if she would have known about “The Spitfire Grill,” Percy likely would have been one of the roles on her musical theater bucket list.

“I’m really thankful that Percy’s now part of my life and will be part of my story, and I didn’t even know she existed, and that’s special.”

Part of MCT’s mission is to educate the community about unique shows that are out there, Martinez said, adding he hopes patrons will be interested in something they haven’t seen.

“The show is pretty simple, but the depth of story and characters is so amazing. I hope everybody would take the time to see a show that’s something different.”

Garner said even if you don’t relate or connect to a specific role, you’re going to be moved by the story and hopefully come out with a new perspective.

“There’s going to be levels of empathy occurring in that audience, in that room every night, and that’s really cool.”

Tickets range from $20-25. For more information and to purchase tickets, visit mctinc.org.

The show is rated PG-13 for mild adult themes.

Missoula singer-songwriter Kaylen Alan Krebsbach is putting out original music for the first time in a decade-long career that’s taken her from busking with Baby and Bukowski to a nationwide tour with Dashboard Confessional.

52 songs in a year: Missoula songwriter on his experiment writing a song a week

The songwriter, known for the smart lyrics and hooks in his bands Oblio Joes, Secret Powers and Protest Kids, signed himself up for the challenge as a test of creativity.

The love and language of jazz will be echoing throughout the University of Montana campus next week, as the annual event brings more than 50 groups of students to the Garden City.

Miles Barnum and Brit Garner rehearse a scene from Missoula Community Theatre's production of "The Spitfire Grill." The plot of the musical follows Garner's character, Percy, a young woman recently released from prison and trying to start a new life in a small Wisconsin town.

Jalynn Nelson, left, and Brit Garner are among the cast of "The Spitfire Grill."

Miles Barnum, Brit Garner, Jalynn Nelson and Colleen Watson, from left, rehearse a scene from "The Spitfire Grill." The small cast is a change from Missoula Community Theatre's bigger productions, and cast members have had more time to explore the characters.