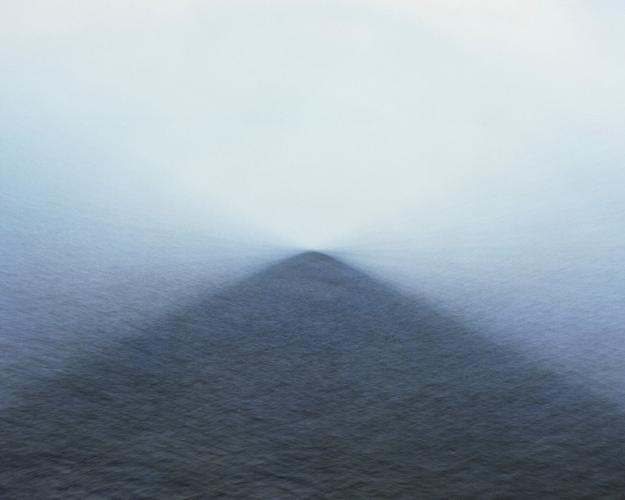 Todd Forsgren's photograph “Bent Horizon (v1.0 in Camera)" from his exhibition, "The World is Round" at the Missoula Art Museum. 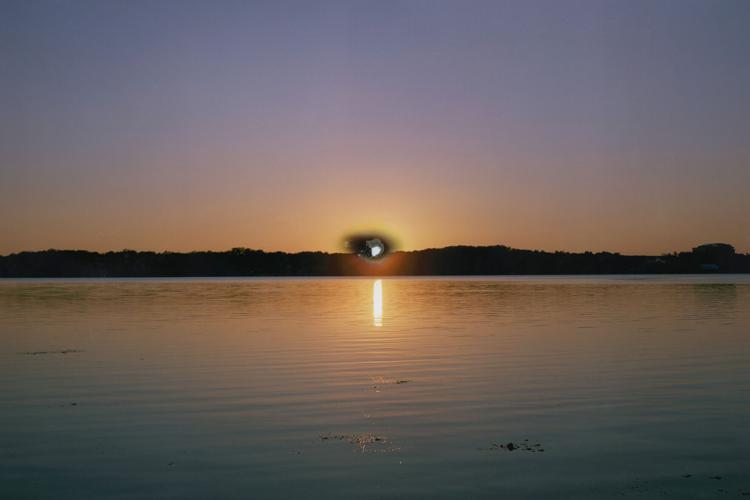 Todd Forsgren, “Trying Not to Go Blind." He photographed a sunset and burned a hole in the print with a cigarette, then mounted an LED light behind it. 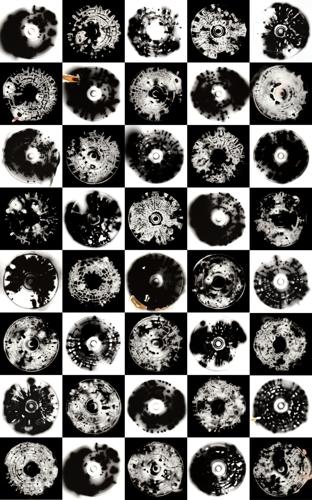 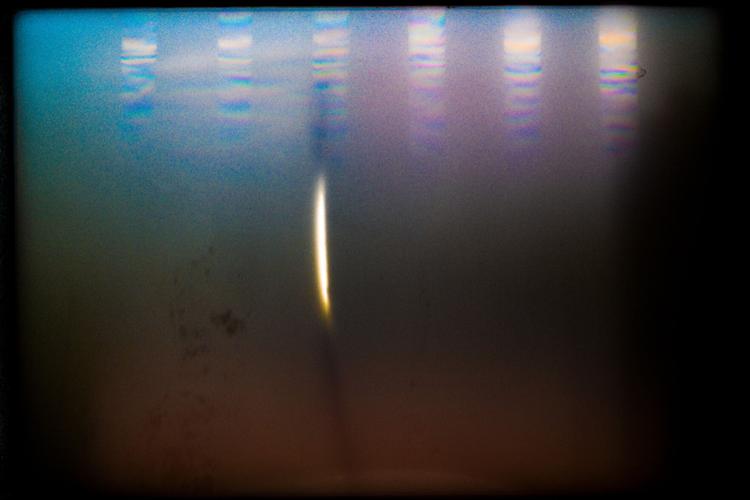 Things aren’t what they seem in the photographs of Todd Forsgren.

An image of rings in a scummy pond resembles Saturn. If the sun in a beach landscape seems too bright, that’s because he burned a hole in the print with a cigarette and snuck an LED light in behind it. Slices of salami look like they could be molecules or distant moons, but really it’s just what happens if you place them right on photosensitive paper.

“Todd Forsgren: The World is Round” is on display at the Missoula Art Museum through Sept. 10. Museum hours are Tuesday-Saturday, 10 a.m.-5 p.m. To see more of his work, head to toddforsgren.com.

A playful sense of experimentation runs through his Missoula Art Museum exhibition, “The World is Round,” which was culled from a series of the same name that’s been developing for over a decade.

The photos come in varied formats and means — he’ll shoot on an iPhone or a professional camera, edit in Photoshop or apps.

“I love photography,” he said. "It’s precious to me. But it’s also profane to me."

Forsgren feels as though he’s “walking a line” with these images — like, say, that beautiful sunset that he punctured with a cigarette.

The title refers to the idea that our direct sight conflicts with what we know to be true, and thinking of ways to explore it through photography.

“It's like trying to fake what we know intuitively — trying to see that observationally,” he said.

Take “Bent Horizon (v1.0 in Camera)” (2018) is visibly a photograph of the ocean — you can see the rippling surface in the bottom half of the photo, but the horizon line is tilted into awkward directions. He shot the image on a single negative with 32 exposures, each time tilting the camera a few degrees on his tripod.

His intentions go a long way toward appreciating what he’s after. MAM’s Senior Curator Brandon Reintjes points to an element of absurdism and humor. The MAM included labels with text from Forsgren, in his own voice, explaining what’s going on, since they thought the humor would come through.

This series started roughly around the time Forsgren started teaching. He began running through every technique he could think of, and exploring processes to see where they led him.

He said he was “thinking of every place that one could play with in terms of photographic making every step along the way that could be extended, every weird process that could be tweaked … every sort of photographic choice that you could wring a little more juice out of, that's kind of the idea behind the series,” he said.

Forsgren worked in far-flung locations. For one project, he photographed birds that scientists had captured with mist nets. Those images were published in Nature and Wired, the former of which mentioned that some people initially found the images disturbing. Birds are seemingly enclosed, and the imagination could spiral outward.

The birds he was photographing were perfectly safe. He explained to Wired that he was shooting them on a white backdrop. Part of the impulse, he said, was that he had just finished school and didn’t have an expensive telephoto lens. But with the project, he was able to start “thinking about how you can really transform material — in a way that’s the magic of photography.”

Regarding the nets, “it's like trapping the viewer, as much as the birds are being trapped,” Forsgren said.

The show spans all manner of techniques and references to photography history. Reintjes said that “every other image is so completely different than every other image, with just a few expectations,” but there remains a “consistency of vision.”

Asked about working in so many different styles and formats, he said “you pick the right tool for the job.” It might be a smart-phone, it might be an appropriated image or a manipulated one. The exhibition includes a few altered photographs, such as Ansel Adams’ image of Yosemite, or the iconic “Tank Man” photo from Tiananmen Square.

One series references the conceptual artist John Baldessari’s “Throwing Three Balls in the Air to Get a Straight Line,” which depicts the artist trying to do exactly that. In Forsgren’s version, he tosses a clementine into the air hundreds of times, attempting to see if he could create an eclipse image.

He shot “Trying Not to Go Blind” (2017) on a beach in Puerto Rico. He borrowed a cigarette from a friend (Forsgren doesn’t smoke) and burned a hole where the sun should be, then framed it with a LED light shining through.

Associate Curator John Calsbeek said they’re kind of like “photographic dada” and “a way of using photography against itself.”

“Saturn’s Rings Reflecting on a Pond” comes from a series in which he’s been shooting the surface of water. It didn’t quite fit in, though, but he kept the file on his desktop and kept returning to it.

“A lot of times work in this series, it's just sort of things that I've kind of been recycling have spun off into something new and different in a way,” he said. After careful cropping, it resembles an image from space.

The “Saturn” piece is situated in a corner of the gallery with some other images that allude to the greater universe through somewhat mundane objects. He put slices of meat on photographic paper and they end up looking like planets, as the holes in the meat resemble craters. The results are often surprises to him as well.

“What's going to happen if I put a piece of salami on the photographic paper and try to shine light through it? Going to Whole Foods and saying, ‘Oh, can I have, you know, a couple of slices of salami, and can you make it a whole bunch of different thicknesses?’” he said.

Some are experiments drawn out of questions he posed to himself.

For “Supernova from MIX CD #1-3” (2016), he placed CDs right into the microwave, resting atop silver gelatin paper. They appear to be crackling and fragmenting, a literal medium threatening to break apart.

Here’s a quick guide to some upcoming arts and cultural events happening in the Missoula area.

Love for solitude and open spaces can sure draw a crowd.

Music org kicks off another summer of local concerts, programs

Music is back at the Roxy Theater’s outdoor space this summer with the “Sound Garden” series through the Montana Area Music Association, plus other events around town.

In Hadley Ferguson’s newest works, she condenses evocative scenes, often the rolling hills and outsized skies of western Montana, into a half a foot square.

Made Fair returns to Caras Park for 14th year

Every piece of artwork has a story, and the organizers of this year’s summer Made Fair want you to hear them.

KFGM, a nearly five-year-old low-powered nonprofit station, last Friday switched from 105.5 FM to a new bandwidth, 101.5 FM, and settled into a space in the Missoula Public Library.

Things to do: Maclean Fest at Wilma, Tell Us Something in Park (sold out)

Here’s a quick guide to some upcoming arts and cultural events happening around the Missoula area.

This month, Red Star is showing a range of work at the Dana Gallery in conjunction with the festival, a somewhat rare chance to see a large selection of his art in Missoula.

Each group member has years of improv and performance experience, and they are excited to bring improv back to Missoula, after the last few local improv groups have come and gone.

Moves in a Minute: “The Fabelmans”

Todd Forsgren's photograph “Bent Horizon (v1.0 in Camera)" from his exhibition, "The World is Round" at the Missoula Art Museum.

Todd Forsgren, “Trying Not to Go Blind." He photographed a sunset and burned a hole in the print with a cigarette, then mounted an LED light behind it.