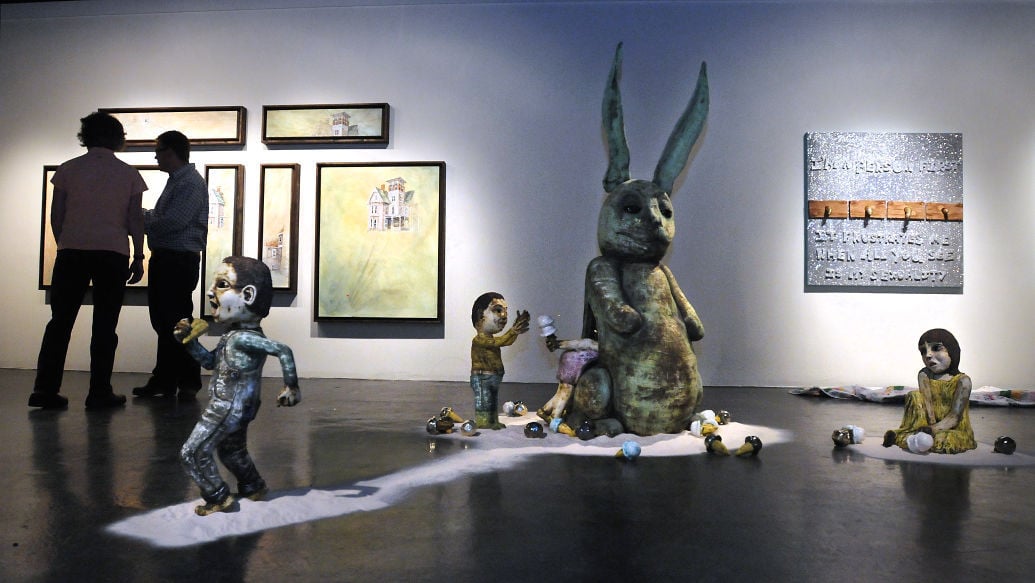 Twenty-two University of Montana fine art students are represented in this year's Bachelor of Fine Art Senior Thesis Exhibition at the Gallery of Visual Arts and the UC Gallery on the UM campus. 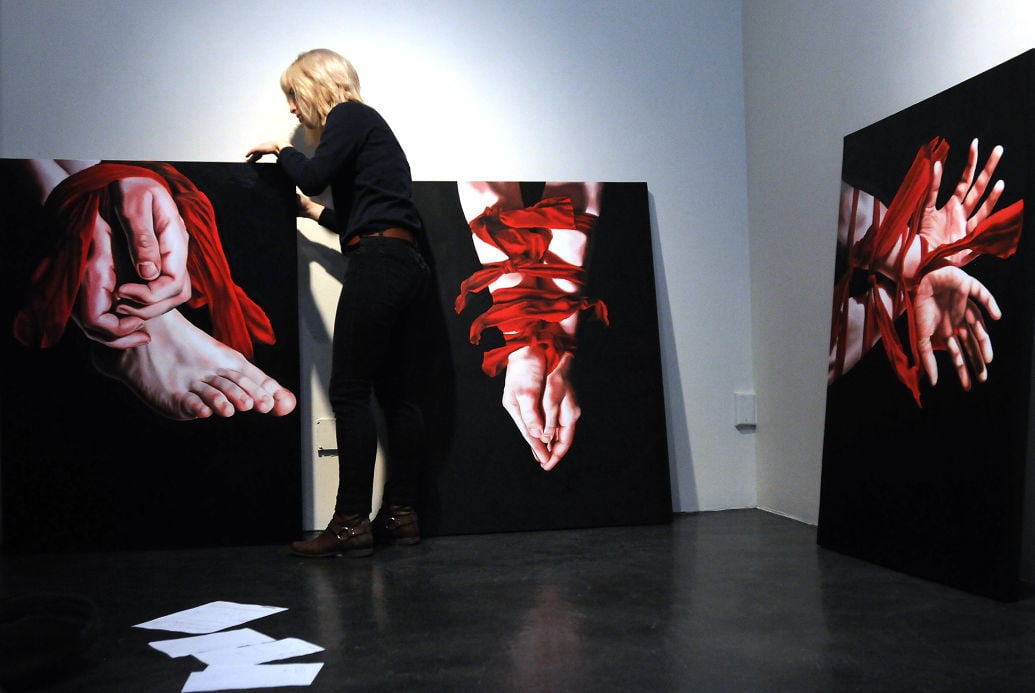 Artist Alex Stewart hangs her work titled "Portraits of the Artist Bound" at the Gallery of Visual Arts. 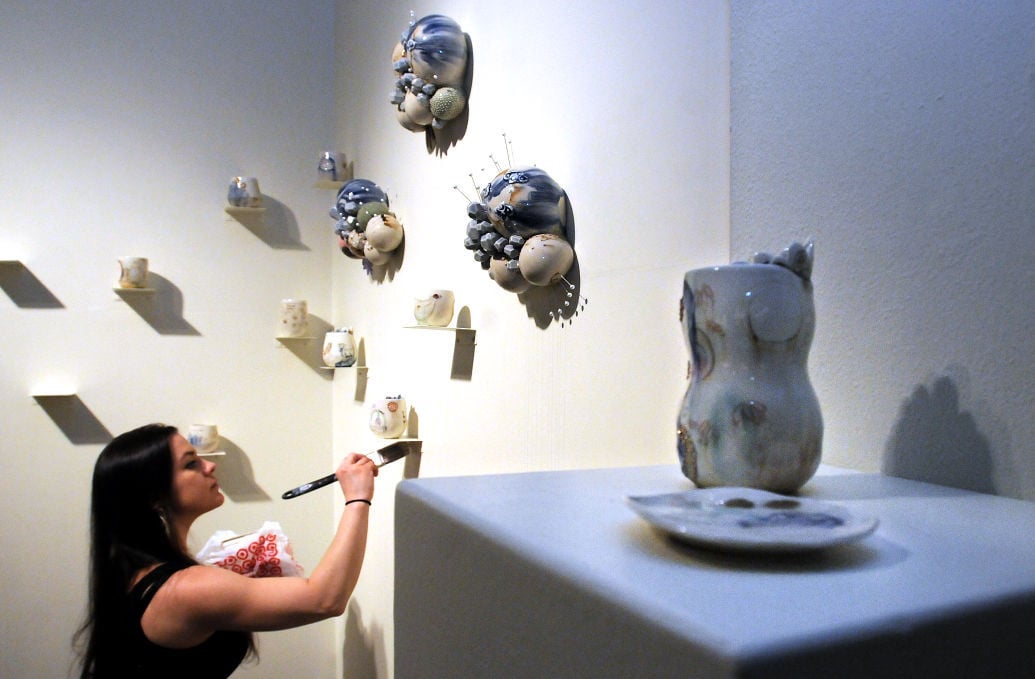 Ceramicist Sarah Magar puts the finishing touches on her display of porcelain art at the Gallery of Visual Art.

Twenty-two University of Montana fine art students are represented in this year's Bachelor of Fine Art Senior Thesis Exhibition at the Gallery of Visual Arts and the UC Gallery on the UM campus.

Artist Alex Stewart hangs her work titled "Portraits of the Artist Bound" at the Gallery of Visual Arts.

Ceramicist Sarah Magar puts the finishing touches on her display of porcelain art at the Gallery of Visual Art.

While they might be about to graduate and leave the University of Montana, 22 of the school’s art students had one more hurdle in front of them, display their work as part of the annual bachelor of fine arts senior thesis exhibition.

All of the graduating bachelor of fine arts students were required to participate in the exhibition, with a relative amount of freedom to create and show off work in whatever visual medium they wanted, from painting and sculpture to photography, printmaking and ceramics.

Michael Workman said he took the exhibition as a challenge to try something he had never done before: making molds for plastic.

His series “This is Not a Trend” at the Gallery of Visual Arts is made up of plastic casting of his right index finger. Alongside the three boards are televisions, one of which is running an endless loop of a faux infomercial Workman wrote, shot and edited to go along with the piece.

“I am trying to display the fingers as precious objects of need without talking about what they are needed for,” he said.

He said he took inspiration from technology companies that continually sell the latest gadget by focusing on how important and life changing their latest model is. For the voiceover, which repeats lines like “This is the future. This is tomorrow,” Workman said he found an commercial from the 1990s of a woman selling a computer, and used adaptation of some of her lines.

To make the fingers, Workman taught himself how to use a silicone molding medium designed to get the detail of human skin, then poured a two-part solution into the mold that cured into harder plastic. He said for many of the techniques, YouTube tutorials were his guide.

“I think that’s a very common thing in art schools now, especially with a new material.

The art itself isn’t the only part that took up Workman’s time. Just to the right of his work is a vending machine that will sell anyone one of the plastic fingers for just one dollar. Workman coded the logic board that runs the machine and wired the circuitry to make it function himself.

“I just had to restock it. We had about 100 of them and we almost sold through during the opening,” he said.

He said he’s hoping to be able to use similar computer hardware in future sculpture projects to design pieces that will be able to move and react.

“I think about it as a jumping off point,” he said.

Benjamin Fondell’s four pieces of work in the exhibition are on display in the gallery of the University Center on campus, along with four other student’s artwork. Fondell said his concentration in the School of Art is in sculpture, but that he likes experimenting with many different mediums to find the one that best suits what he’s trying to create.

“Luckily, they keep teaching you everything here at the school,” he said.

Like Workman, Fondell also used the BFA exhibition as a way not only to create a set of art, but also to push his own skills and learn new ones as well. Months ago when his work on the exhibition began, he set himself the goal of learning two new types of casting, glass and copper.

“I wanted to be able to expand my own skill set, and I used this as a way to do that. I think that’s important now in contemporary arts, working with new types of materials,” Fondell said.

For the first month of his time working on the thesis project, Fondell learned how to cast glass, a tricky process that involved hours of reading as well as calling studios and companies around the country that specialize in the craft.

“It’s a difficult technique because glass doesn’t behave the way you want it to behave and it’s a lot more fragile than other castings,” Fondell said.

One of the pieces on display includes 28 glass casted faucets attached to the wall. Fondell said in reality, he ended up making more than 70 to be able to get enough finished that he was happy with.

Another one of his thesis artwork pieces included a self-portrait copper casting of his head. While the process of making a wax mold and then pouring in the liquid copper was more straightforward, Fondell said he was happy to have his fellow BFA students around the studio to help him.

“My social life lately has just revolved around the other students in sculpture and ceramics for the past few weeks. Bouncing ideas off them or pitching in to help finish a tricky part of a project,” he said.

He said it was extremely gratifying to finally step away from the studio and see his work up on the walls of a gallery for the public to view.

Would you buy a pink blob? Missoula artist examines consumerism with gelatin

Michael Workman’s studio was cluttered with tables, white pillars, cords and pink gelatin Tuesday morning, without an unused surface in the room.