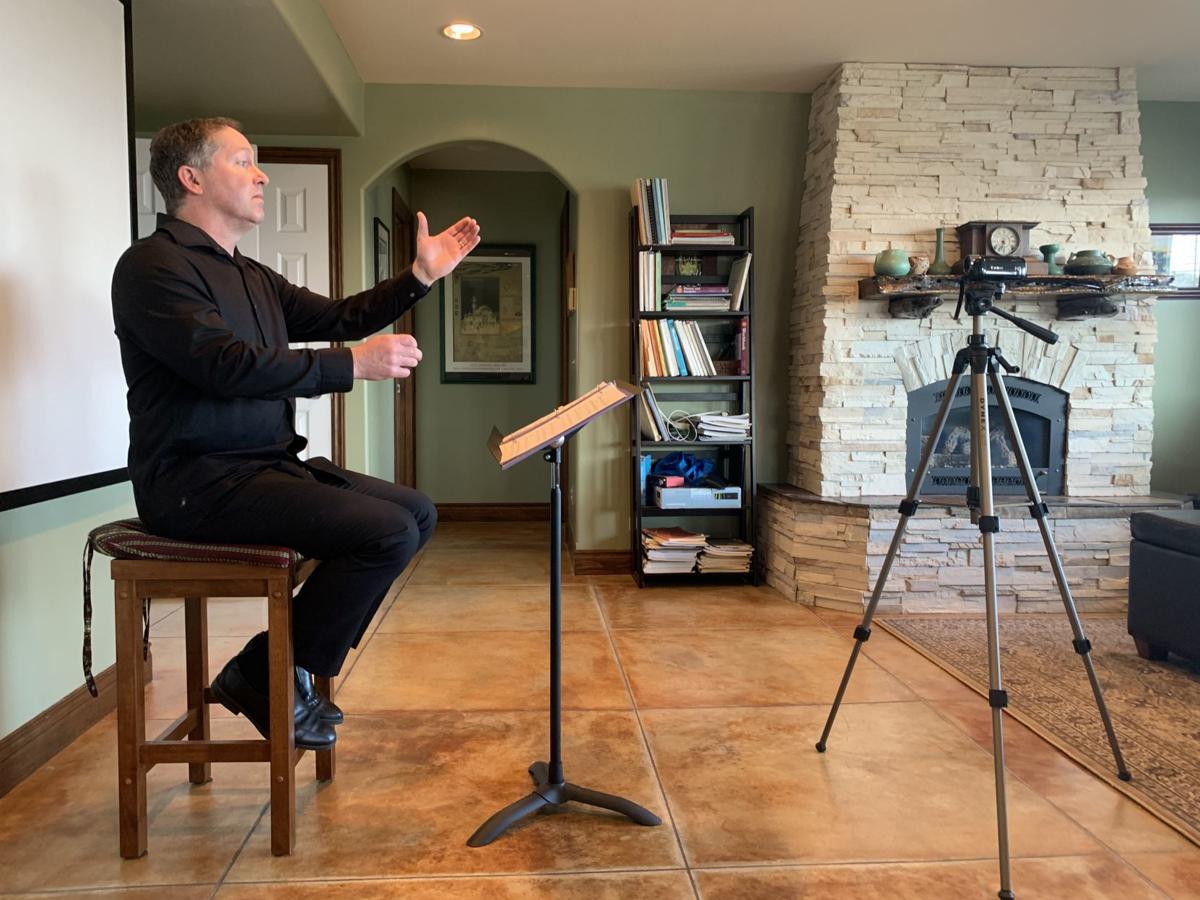 Zootown Cabaret Director David Cody records himself conducting a song for the University of Montana ensemble's online performance "There Will Be Light: A Virtual Cabaret" set for Friday. 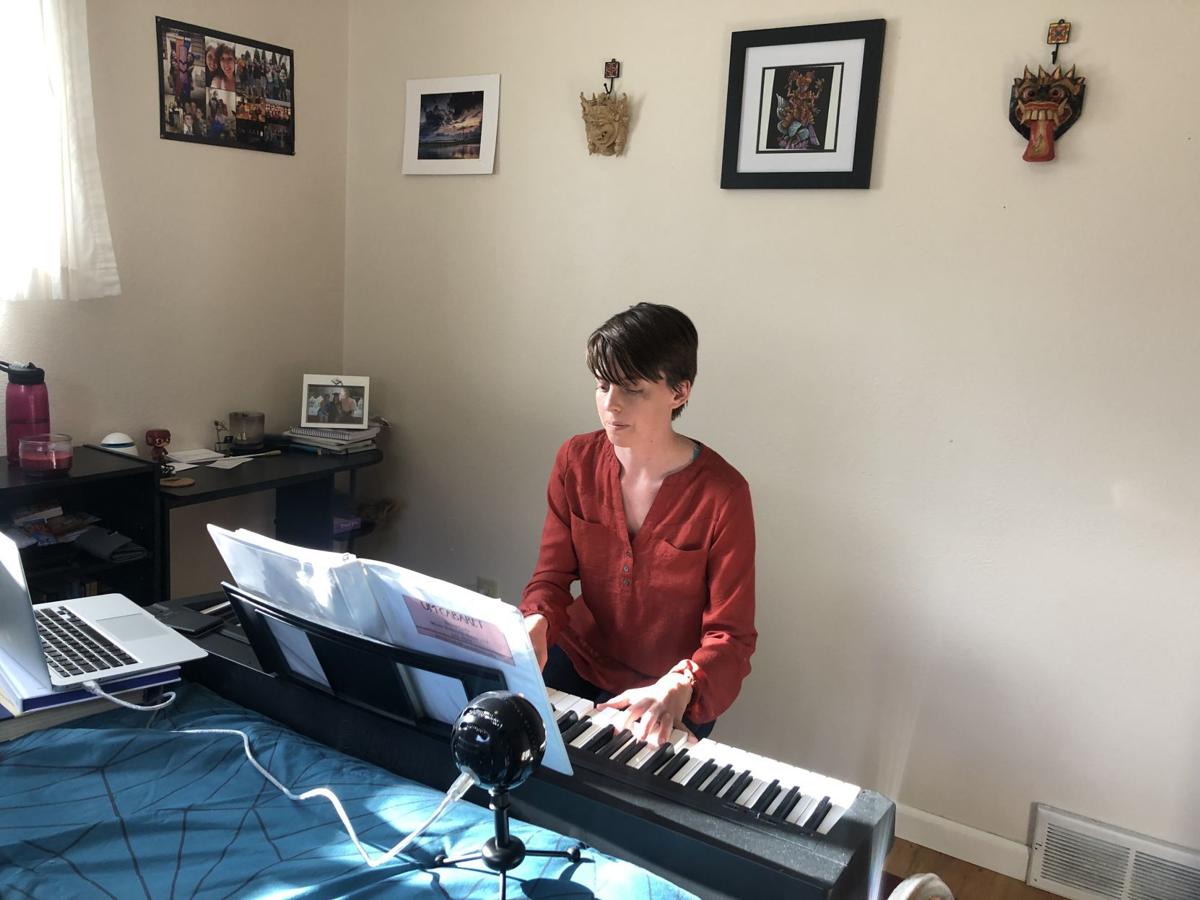 “The show must go on” for the Zootown Cabaret, a University of Montana performing ensemble whose members have spent the past several weeks under stay-at-home orders due to the coronavirus transforming their in-person event into a one-of-a-kind virtual show online.

There Will Be Light: Virtual Cabaret teaser!

“There Will Be Light: A Virtual Cabaret” is a one-night-only event featuring contemporary musical theater songs from shows like “Sunset Boulevard,” “Next to Normal” and “The Book of Mormon,” among others. Set for Friday evening, the performance is a culmination of hours of recording and editing to create a show that’s unique, even in the realm of online-only entertainment (see box for details).

The Zootown Cabaret is an audition-based ensemble that performs song and dance variety shows at small venues around town. When their spring performance, originally scheduled for March 27 at the Downtown Dance Collective, was canceled after closures due to the coronavirus pandemic, the group was quick to brainstorm ways they could still get their work in front of the public eye.

“The entire semester is built to lead up to this performance. You put everything into that,” said Brit Garner, a wildlife biology Ph.D. student and member of the group. “We thought, we can maybe be a leading example of how we adapt and we evolve and we keep going.”

The editing for the video performance they’ll show on Friday was no small task, as Garner and the group’s pianist Jane Best used a multi-step process that layered several audio and video tracks to create a single, cohesive show. Garner said for this kind of undertaking, organization was key.

First, David Cody, the group's director, recorded a video of himself conducting each song in the show. Next, Best laid down a piano track to go along with Cody’s conducting. Once that audio and video were pieced together for each song, the files went out to the musicians and singers in the group, who then recorded their individual parts. Best and Garner pieced together each singer and musician for every song and strung them together to create a video performance that’s much more than just tiled faces on a screen.

“There is a bit of staging involved,” Cody said. “The students have been able to make their own decisions on how they want their videos to look, what they wear, where they are.”

Garner, who in addition to editing also had to record herself singing, said getting a good video clip can take some time, with steps such as figuring out how to rig your phone up in the right position and finding a time when your roommates aren’t around sometimes becoming trickier than expected.

“My cat Jane has made a cameo in everything I’ve been trying to do for the last several weeks,” she said. But these students are in the arts, so getting creative is kind of their thing.

In a song called “Telephone Wire” from the musical “Fun Home,” Garner and Best used “movie magic” techniques to create a scene where a father and daughter duo perform a duet as they’re driving.

“The guy playing the father was in Missoula and he filmed himself in his car in the driver’s side and the girl playing his daughter was in Helena and she filmed herself in her car on the other side, and then Brit and Jane had to edit that and sliced it together so it looks like they’re in one car,” Cody said.

In a song from a musical called “Side Show,” two of the singers dressed alike to portray sisters who are conjoined twins. And many of the songs feature choreography.

“We still miss that audience connection,” Cody said. “But it has sort of boosted their spirits a great deal and given them something creative to work on that was completely unexpected.”

The Zootown Cabaret generally picks a theme for each show, doing songs from a certain decade or genre in the past. This time around Cody took a different approach, catering each song to the individual voices in the group.

“I wanted to find the perfect song or duet that fit these students,” he said, which makes for an ultra-polished performance when paired with the ability to take multiple recordings and use the best one.

The 11 members of the group have been practicing since January and hope the video performance can create an intimate setting with viewers despite being separated by a screen.

The group also hopes the show spreads a positive message of hope for the future. The title, “There Will Be Light,” is the name of their finale number from the musical “Next to Normal.”

“The song is very much so a realistic look at optimism,” Garner said. “Things are hard and sometimes things really hurt and take a long time to heal. And maybe sometimes they don’t ever, but there will be light somewhere.”

Cody said the group really felt the song had a message of emerging from despair that seemed to fit in with the journey they’ve taken with the show.

“In the midst of all this craziness … we came from the dejection of learning that our performance was canceled to figuring out a new way to do it.”

“There Will Be Light: A Virtual Cabaret” will be presented via YouTube at 7:30 p.m. on Friday, May 1. The link will be posted on the group’s Facebook event page.

Due to copyright licensing, viewers will have to tune in from their own devices for the one-time performance. The online event is free.

Netflix announces documentary about the career of Kanye West

Netflix announces documentary about the career of Kanye West

Missoula’s Radius Gallery is featuring pottery and sculptures from 12 artists and is taking appointments to show the work in person while the building remains closed to the general public due to the coronavirus pandemic.

Online resources for at-home arts and entertainment in Missoula

Does your organization offer online or at-home arts activities or entertainment? If so, email your information to entertainer@missouian.com.

The visionary behind Kalispell-based Field Guide Designs, Mohler is known for arranging groupings of items to create organized layouts.

New on the Montana bookshelf during COVID

Books are still arriving in local bookstores. Here are a few:

Zootown Cabaret Director David Cody records himself conducting a song for the University of Montana ensemble's online performance "There Will Be Light: A Virtual Cabaret" set for Friday.