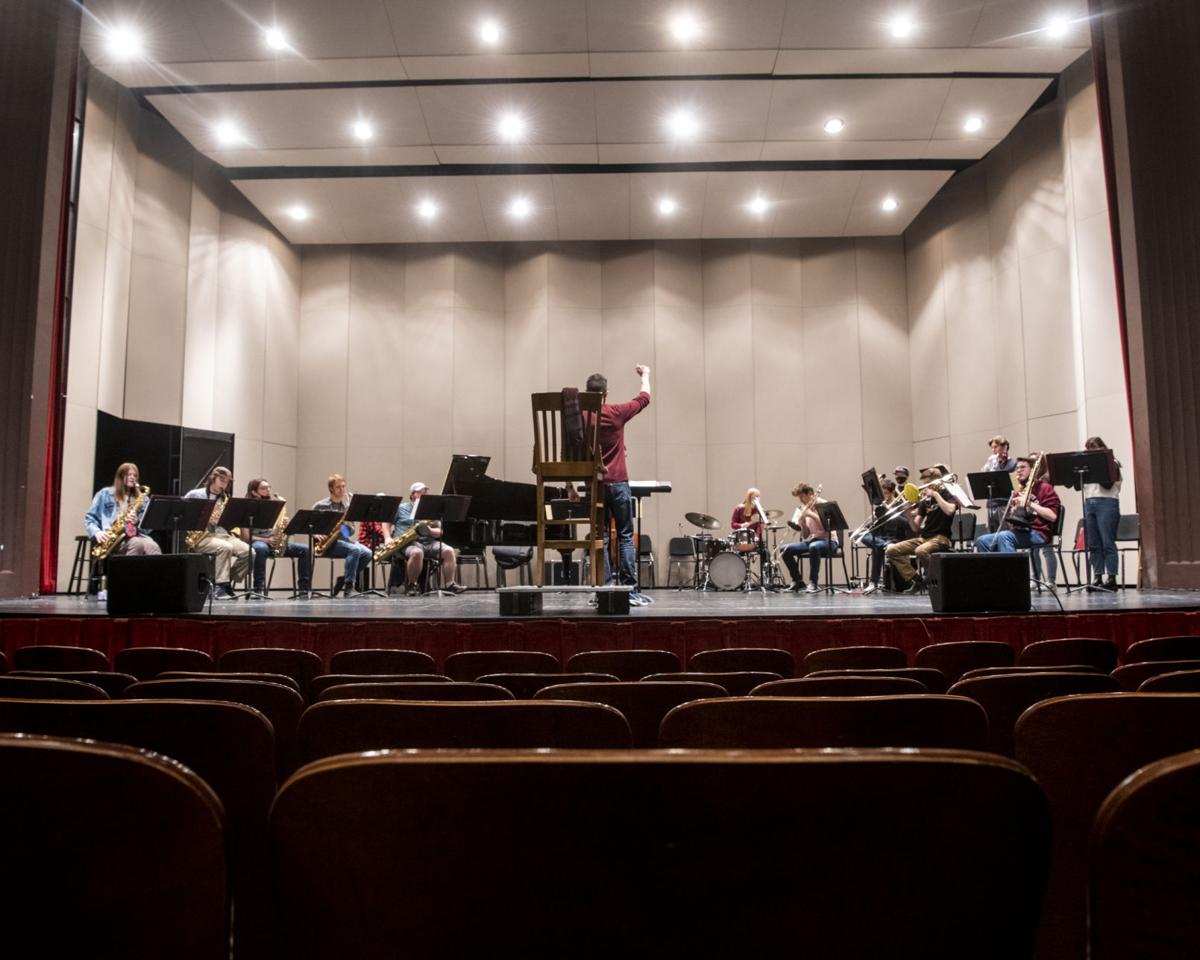 Jazz students at the University of Montana rehearse for an upcoming concert at Dennison Theatre on Tuesday afternoon. 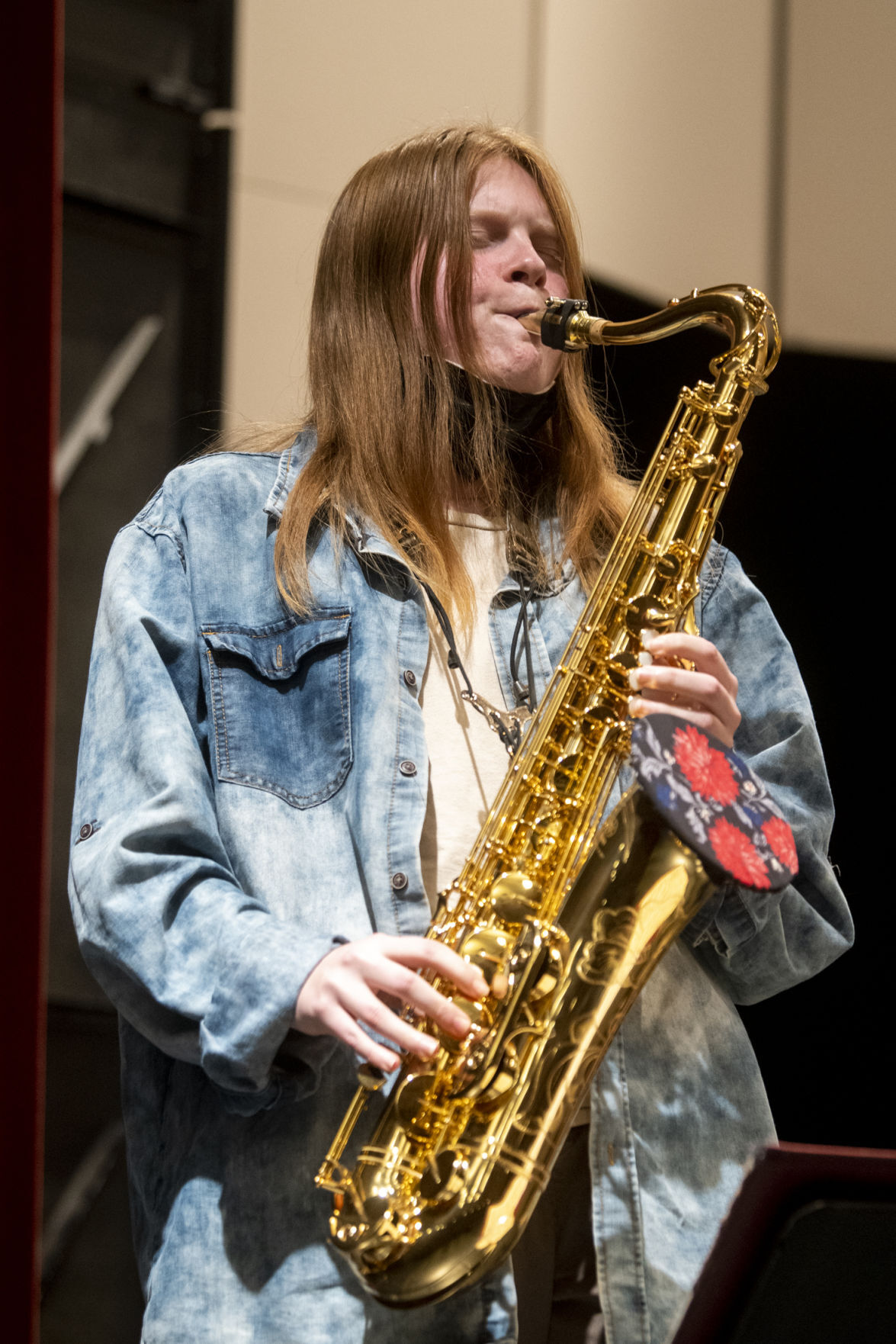 Veronica Stimping, a freshman, plays saxophone during rehearsal in the Dennison Theatre on Tuesday afternoon. 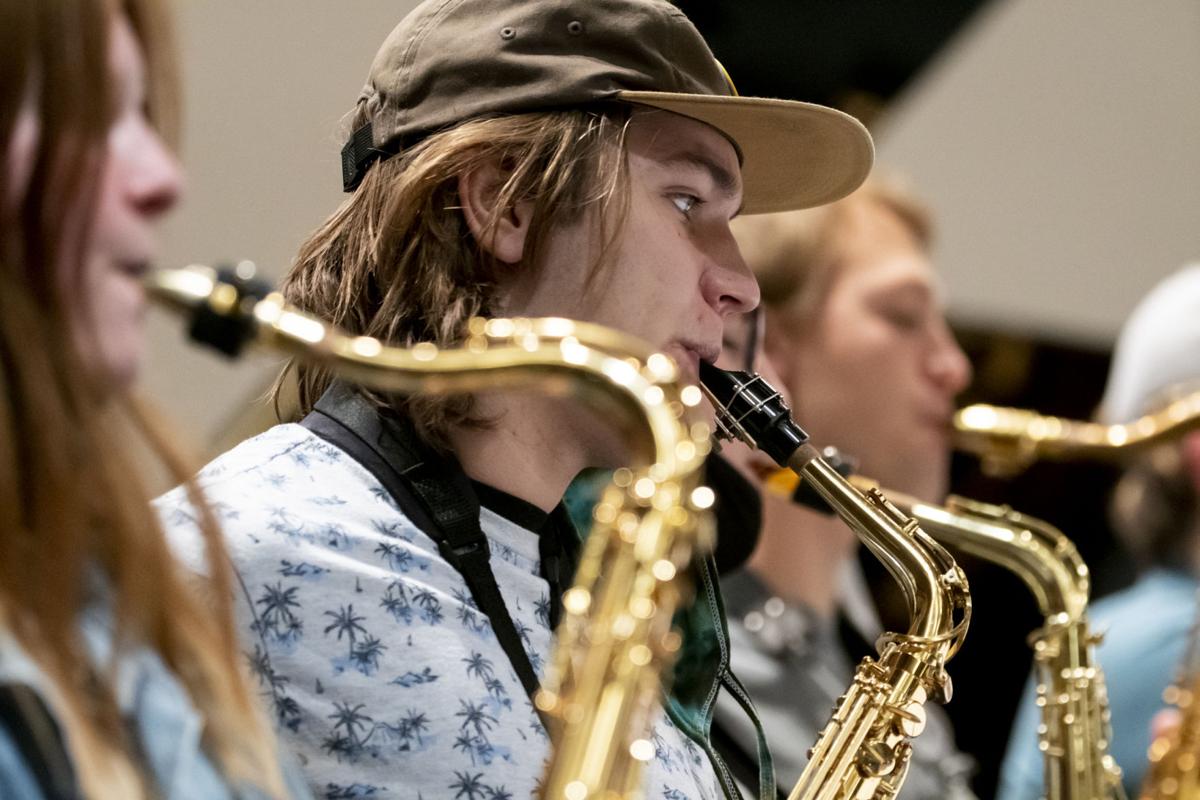 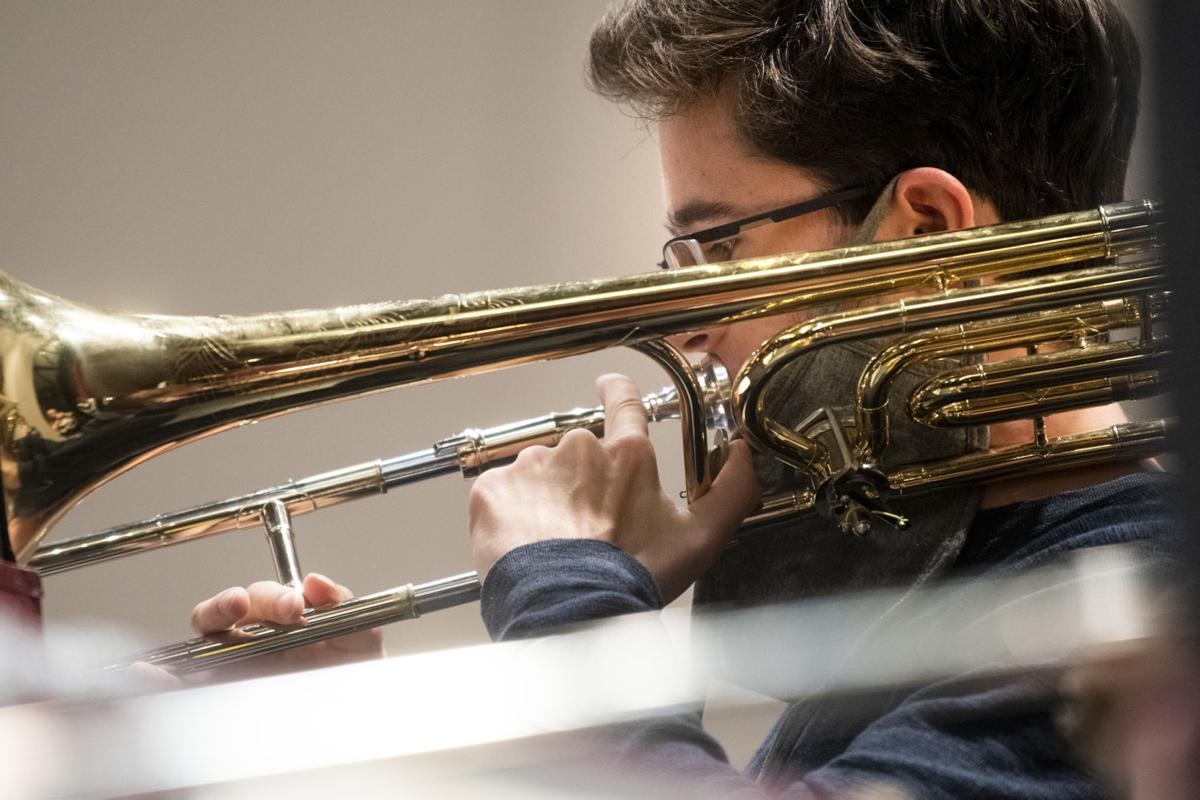 Dylan Bautista, a junior, plays trombone during rehearsal in the Dennison Theatre on Tuesday afternoon.

Maria Schneider is considered to be one of the best composer-bandleaders in jazz, but Ally Fradkin never had a chance to play her music until now.

“It’s honestly kind of just more impressive. Having to learn it, and getting to learn it, it’s just more complicated than it sounds on the record,” said Fradkin, a junior at the University of Montana and a member of its top big band.

There’s Schneider’s use of different meters and harmonies.

“It’s eye-opening to see how her brain works,” Fradkin said.

The tune “Wyrgly,” from her 1992 album “Evanescence,” is on the program for Friday’s UM Jazz concert, the latest in its “equity” series. The three student big bands, each with around 18 members, will perform compositions by LGBTQ and female composers, artists, arrangers and bandleaders.

Program director Rob Tapper said it’s a continuation from last fall’s “Jazz and Justice” series, which presented the genre’s Black composers and their music with more historical context for students and audiences.

“Missoula is a very open environment, especially in the art world,” he said, and people “all want to see and hear more diversity.”

The program tries to keep its guest artist series balanced — Friday’s concert has tunes from prior guests like Patty Darling, who teaches at Lawrence University in Kansas. (She’s won awards from Down Beat and arranged Radiohead’s electronically driven “Idioteque” for big band.)

Working on the concerts themselves, Tapper said the students’ response is visible.

“Seeing their response to us talking about the different artists and music we’re playing, it’s a good feeling,” he said.

The show on Friday goes back to early composers and arrangers. Billy Strayhorn, who was Duke Ellington’s right hand, wrote standards like “Take the ‘A’ Train” and “Lush Life.” You’ll hear him on “Such Sweet Thunder.” Another early composer, Cole Porter, will be heard via his standard, “Love for Sale.”

Kyler Rebich, bassist in the No. 1 big band, said the diversity efforts in the concert programs, which date back several years, were a surprise at first but are reason to be thankful.

“There were a lot of women in jazz and gay people in jazz who haven’t gotten the right representation and spotlight they deserved purely because of their identities,” Rebich said.

Rebich is on track to graduate this year. A native of the Missoula area, he picked up bass in high school and continued with the all-city jazz combo.

“As a gay person myself growing up in Frenchtown, there was just like no representation anywhere, and I kind of had to bring my own representation to the table if that makes sense,” he said. “It’s cool to finally have something in my life that’s also representing people from the community that I’m in.”

Rebich took an independent study course last summer focused on three composers, including Schneider, who’s won seven Grammy awards, among other honors. She’s innovative, with “harmonies that are everywhere, but not out of place,” and is particularly inventive with her use of time.

Fradkin, the saxophonist, is supplementing her performance degree with a music education major because of its high job placement rate, with plans of teaching at the high school level. She said the UM program has done a good job representing diversity in its concert programs and doing it correctly.

“The music that we play is definitely not close-minded,” she said, adding that there are other areas to work on, such as incorporating Indigenous composers, or ones with disabilities.

“A lot more representation needs to happen, but at least we’re on our way there,” she said.

This semester, the jazz program has moved back toward more normal concerts. This show will be in the Dennison Theatre, but they’re keeping a livestream option, which last year was successful in reaching viewers outside of Missoula and Montana.

The winter fundraiser concert, Holiday Swing, will also return to in-person concerts this year at the Zootown Arts Community Center.

The University of Montana Jazz Program’s “Jazz Equity” big band concert is on Friday, Oct. 29, at 7:30 p.m. in the Dennison Theatre. You can also livestream it from home. Go to griztix.com for tickets. They run $12 for adults, $8 for seniors 60 and up, $8 for UM students and ages 2-17. Masks are required inside.

Printmaker Max Mahn, who's known for his gig posters, will create imagery for the craft brewery's 2022 Off-Centered Art Series beers.

After 18 years, Tom Bensen is planning to retire from his post as executive director of Arts Missoula, the nonprofit local arts agency.

If you want an idea of how contemporary a contemporary modern dance piece can be, a few pieces from the upcoming Bare Bait Dance production th…

Here's a quick guide to some arts and cultural events happening in Missoula in the coming week.

Director: Working on MCT's 'Gilligan's Island' has been a refuge

Artist's collages are 'a secret garden' with a bright palette

The bouquets, in a collage of techniques and hot palette, explore questions: “What do you want to do in the later years of your life? Is that really what you want? Have you taken any steps to get there?”

"God's Country," a feature film based on a short story by Missoula author James Lee Burke will premiere at Sundance Film Festival next month with Thandiwe Newton (“Westworld”) in the lead role.

Jazz students at the University of Montana rehearse for an upcoming concert at Dennison Theatre on Tuesday afternoon.

Veronica Stimping, a freshman, plays saxophone during rehearsal in the Dennison Theatre on Tuesday afternoon.

Dylan Bautista, a junior, plays trombone during rehearsal in the Dennison Theatre on Tuesday afternoon.