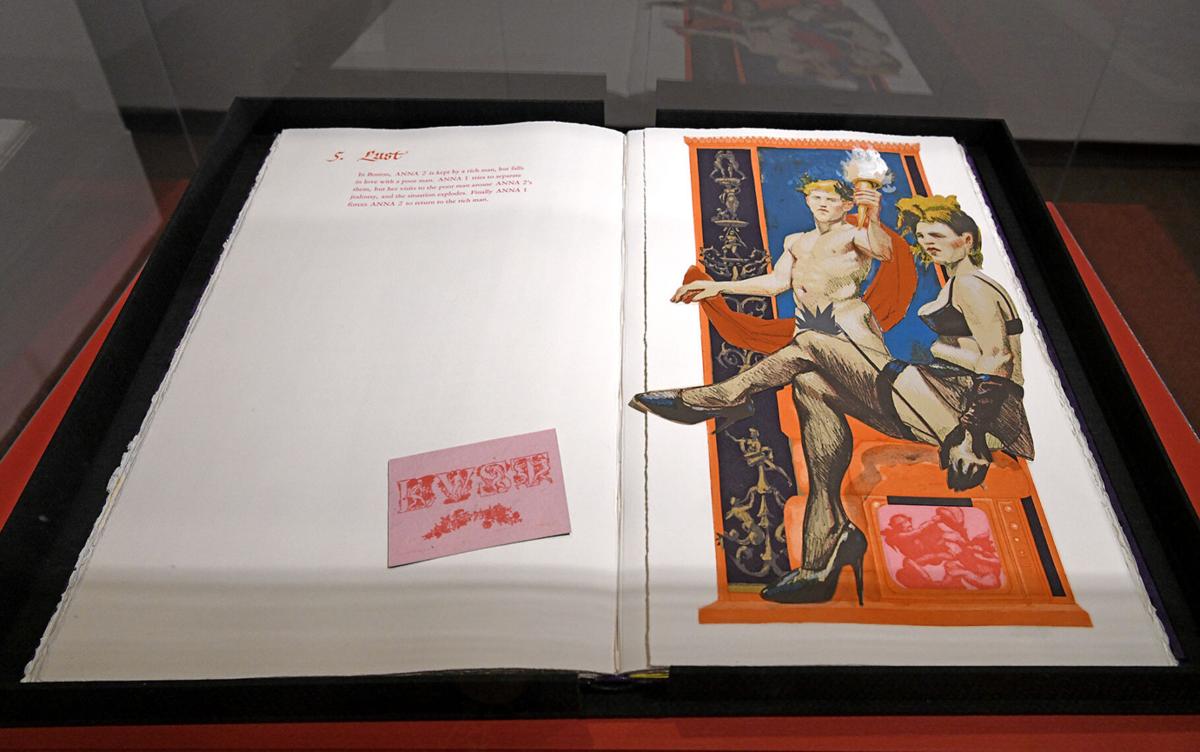 "The Seven Deadly Sins of the Lower Middle Class," by Bertolt Brecht and Kurt Weill, and published by Vincent FitzGerald and Co. in 1992, was produced by 10 artists and shops. 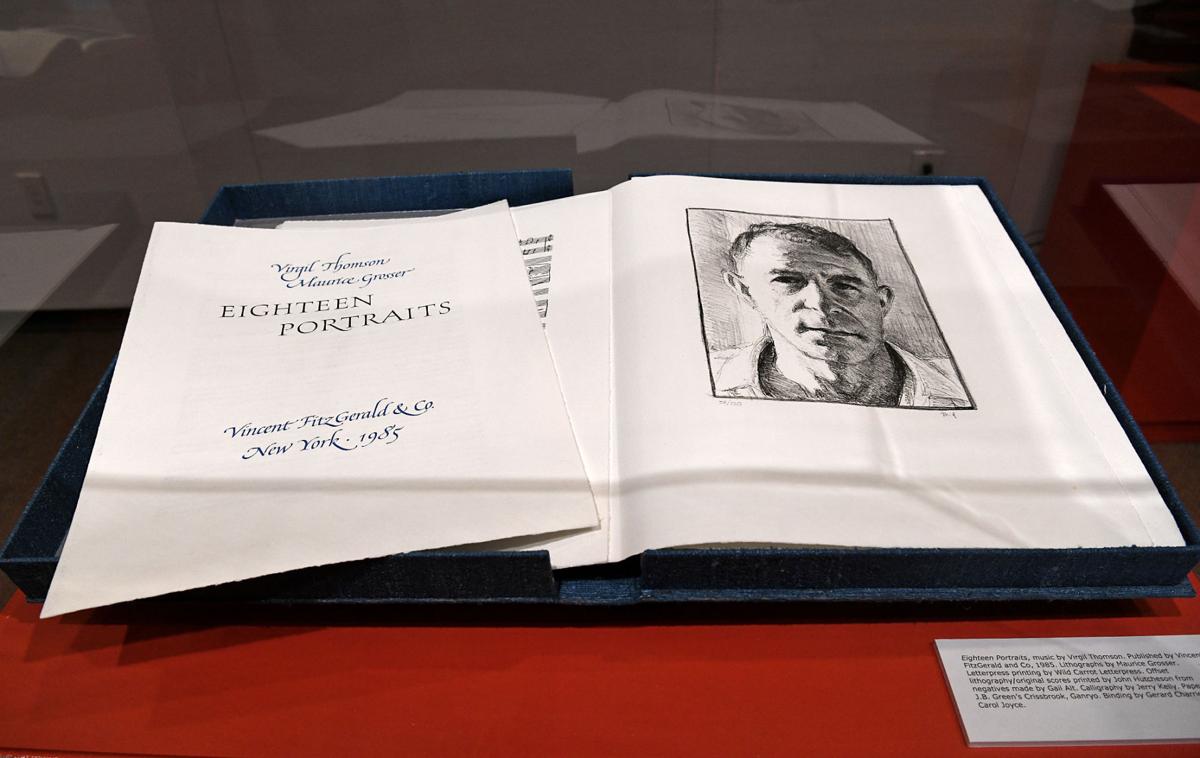 "Eighteen Portraits" is a collaboration between composer Virgil Thompson and artist Maurice Grosser.

It’s difficult to judge a book by a two-page spread. That’s where the virtual tour comes in.

If you stopped by the Montana Museum of Art & Culture’s new exhibition, "Bookish: Selections from the Dan Weinberg Collection," you’d likely be dying to turn some of the pages. The Meloy Gallery is filled with art books — collaborative works with contributions from artists, authors and bookmakers — safely encased under glass.

A James Joyce fan might want to see more of “Brideship and Gulls.” An excerpt from “Finnegans Wake” is printed in a handcrafted book, along with etchings, watercolors and calligraphy, all wrapped up in a custom decorated box. Another, “The Seven Deadly Sins of the Lower Middle Class,” adapts Kurt Weill’s final collaboration with Bertolt Brecht with collages, etchings, and watercolors by an entire team.

To give you a front-to-back look at each title, the MMAC reached out to videographer Eileen Rafferty, and they recorded page-by-page explorations of the entire exhibit that you can explore online.

“That interestingly enough, makes sense with or without the pandemic,” said MMAC director Rafael Chacon. “Because these are all books, which let’s imagine when there was no pandemic, you would just see objects open to a certain page under glass. And the virtual tour gives you the opportunity to see more.”

Since the exhibition opened, the MMAC has been releasing videos in a series called “Bookish Reveals,” where scholars give you insight into the particular titles. For instance, one book is a collaboration between the composer Virgil Thompson and his partner, the artist Maurice Grosser. Over decades, the two would create dual portraits of individuals, some famous, some everyday folks. Thompson wrote a musical sketch, Grosser drew one. To give more insight, the MMAC asked Adam Collins, a professor of cello at the University of Montana, to give a virtual walk-through.

About these books. They’re limited edition titles in a collaborative French tradition (“livre d’artiste”) that were published by Vincent FitzGerald & Co. of New York.

Chacon said you can think of them as part of a spectrum. In the middle are hardcover books — with authors, cover artists and book designers all making an object that’s pleasing to the eye. And then there are these books, where “talented artists on all fronts work on a very, very small limited edition book.” They might have created a run of 100, often much less.

In some cases, FitzGerald would enlist artists and bookmakers to respond to an existing text, like James Joyce. Another title pairs Kafka’s unpublished writings with photogravure.

The MMAC is showing these thanks to a home-state connection. One of FitzGerald’s friends, Dan Weinberg, collected almost all of his books. A retired clinical psychologist, he served as a state senator based out of Whitefish, and founded the Montana Innocence Project, and donated the titles to the MMAC’s Permanent Collection.

Chacon and company paged through the many titles to find ones for the show, comparing some of them to interactive sculptures that stretch the boundaries of bookmaking.

Take “Fragments of Light,” a poem by the poet Rumi, translated by Zahra Partovi. Artist Linda Schrank designed a sculpture that riffs on a Chinese style of book-binding. Each calligraphic line of the poem was engraved onto a slate of plexiglass that are sewn together in vertical rows that extend out in four directions. On display in the gallery, it looks like a trophy. In the video, you can see how it works.

“The whole thing folds into a discreet, tiny box,” he said.

“Bookish: Selections from the Dan Weinberg Collection” is on view at the Montana Museum of Art & Culture’s Meloy Gallery in the PAR/TV Center through Dec. 12. To see the virtual tour, where each book is opened page by page, or to find links to video “reveals” with scholars, go to https://www.umt.edu/montanamuseum.

Dec. 3, 11 a.m.: Artist Audra Loyal of The Vespiary Book Bindery in Missoula will reveal a group of books with unusual and innovative bindings.

Prints that illustrate American hardship, resilience and daily life during a crisis are going on view at the Montana Museum of Art & Culture.

Kiddomatic: Bright, fun kids' films from around the world

Films with bright color palettes and bright messages — if you “want an escape to watch something happy,” the Kiddomatic children’s internation…

Things to do: Museum shows, dance and film fests

A quick guide to some of the in-person and online arts events happening around Missoula in the coming week.

"The Seven Deadly Sins of the Lower Middle Class," by Bertolt Brecht and Kurt Weill, and published by Vincent FitzGerald and Co. in 1992, was produced by 10 artists and shops.

"Eighteen Portraits" is a collaboration between composer Virgil Thompson and artist Maurice Grosser.