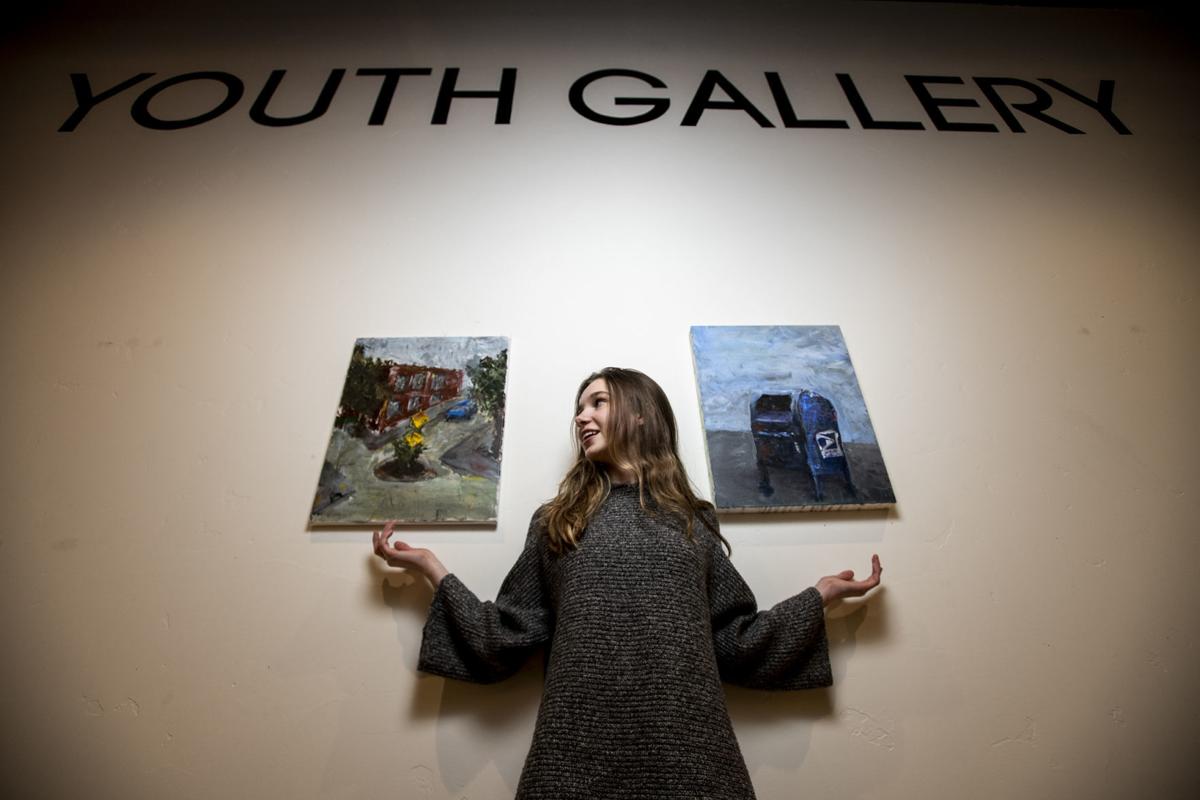 Ila Bell, a 14-year-old painter, will have a solo exhibition for the debut of the Zootown Arts Community Center's Youth Gallery on Friday. "I find that sometimes we have things in our life that we don't think about very often, and I like to make them into something people can admire," she said. The Youth Gallery will feature work made exclusively by artists 18 and younger. 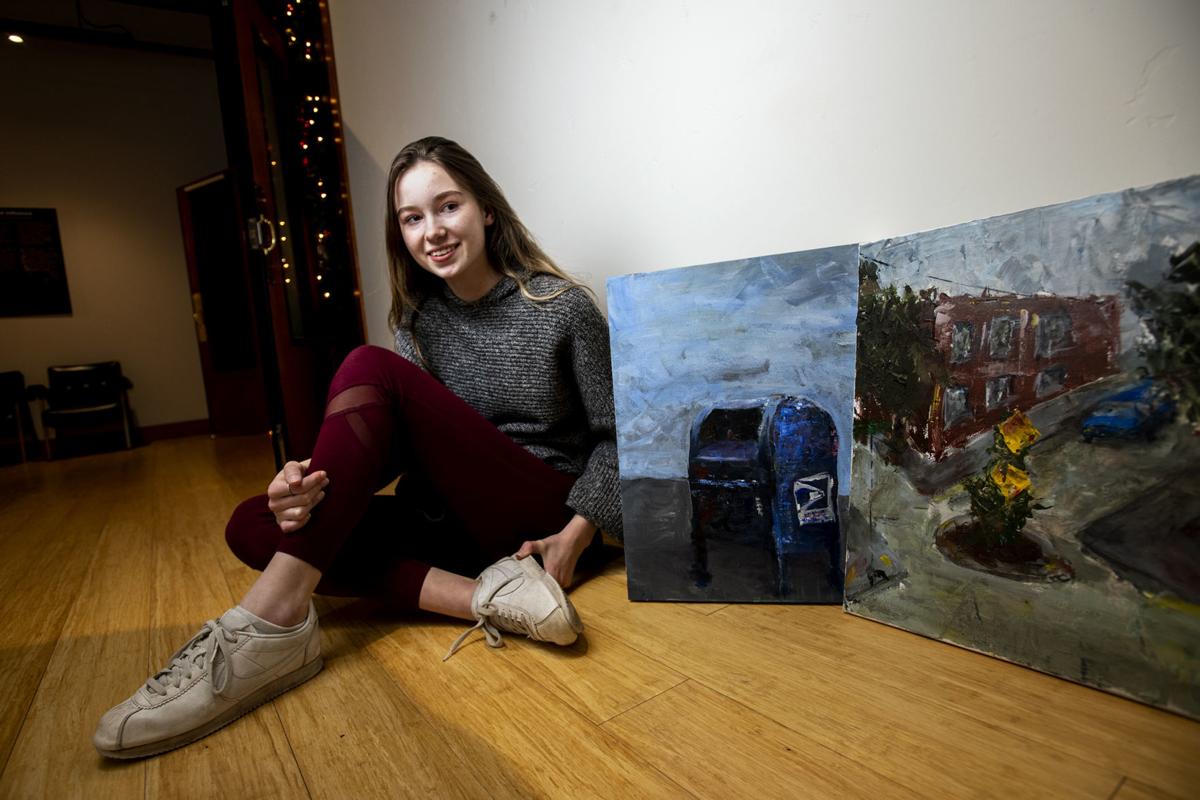 Bell, who has been painting since she was a young child, won the junior division in the fine arts competition at the Western Montana Fair last year. She paints urban landscapes, bringing mundane street scenes to life.

Ila Bell, a 14-year-old painter, will have a solo exhibition for the debut of the Zootown Arts Community Center's Youth Gallery on Friday. "I find that sometimes we have things in our life that we don't think about very often, and I like to make them into something people can admire," she said. The Youth Gallery will feature work made exclusively by artists 18 and younger.

Bell, who has been painting since she was a young child, won the junior division in the fine arts competition at the Western Montana Fair last year. She paints urban landscapes, bringing mundane street scenes to life.

The Zootown Arts Community Center is debuting its new Youth Gallery with a solo show featuring works by 14-year-old Missoula painter Ila Bell, who won the junior division in the fine arts competition at the Western Montana Fair and is excited to have a space downtown where the public can see her work.

“I think Missoula’s a very arts-centered town, and so I think it’s important for it to be encouraged when young artists make art to be able to have the chance to have it out there,” Bell said.

The wall adjacent to the children’s play area in the ZACC’s new building will exclusively feature works made by artists who are 18 and younger.

“We just wanted to give youth a voice in our community and empower them,” said Patricia Thornton, gallery, adult education and print shop manager at the ZACC. “We never really had a youth-focused gallery before. Our last gallery had all ages in it, so it’s really a new and exciting thing for us.”

Bell attends Sussex School in Missoula and has been painting since she was a young child. Painting from urban landscapes, her work takes a mundane street scene and brings it to life. The paintings are vacant, but lively, and colorful, but moody.

“I really like painting objects or street scenes, so urban areas and things that are overlooked in day-to-day life, and I kind of like to give them a personality,” Bell said.

The painting that won at the fair depicts a blue U.S. Postal Service mailbox and is included in her ZACC show, which opens Friday, Dec. 10.

“It’s like the inanimate object has come alive,” Thornton said, adding the mailbox looks like it could walk off the canvas and run away.

And that’s part of Bell’s artistic style, something she’s already developed despite being a teenager.

“I find that sometimes we have things in our life that we don’t think about very often, and I like to make them into something people can admire,” Bell said.

A child of artists, Bell grew up in a household where art supplies were readily available and trips to galleries and museums were frequent. Her father is Kevin Bell, director of the School of Art at the University of Montana, and her mom is Margo Geddes, a Missoula artist and photographer.

“We’ve been very careful not to steer her towards something," said her dad, Kevin. “But her motivation, this has really been her thing, and it’s been really exciting to stand back and watch.”

Her parents are proud of how she’s taken initiative to forge her own path and taken on a mature role in her painting.

“I’ve been impressed with how she’s been able to grab these opportunities, and she’s been very brave out there,” Kevin said.

And while there is some pressure that comes along with being an aspiring artist with parents who are professional artists, Bell said it’s definitely helped her along the way.

“It’s nice being able to be supported throughout it, having parents that will take you to a museum and let you look at the art or take you home and have art supplies at home,” she said.

Kevin watched his daughter paint for hours on end in a studio they set up together this past summer at their home and said it’s a good sign she’s so passionate about it.

“It’s always exciting to watch her paint because you can see her light up, you can see the smile come on her face and she gets really excited about it.”

She’s only 14, but Bell said she’d love to make a career out of her painting.

“I think if I had the opportunity to do that as a living, I think that would be really amazing.”

Her dad said her future is entirely up to her and she already has the most important ingredient to pursuing her art: passion.

“Being in the art world, I know it’s something you have to really love and really want, and she’s had this internal drive for this all her life,” he said.

Kevin said the new Youth Gallery is a great addition to the ZACC as an education tool and an asset to the city of Missoula. As a professor, he sees it as a way to bridge the gap between education and the professional world.

“It’s so exciting that they’re showcasing kids around town who are doing art. I think it also really feeds the whole art community in town because it’s building a constituency at a young age for supporting the arts and being involved in the arts.”

The gallery will not only feature solo shows, but will display art from the youth workshops and classes put on by the ZACC.

“We’ve always loved the sensibility of children and we have youth programs, so we like to exhibit things from our classes and camps,” Thornton said, adding the next work the Youth Gallery will feature will be made by children of immigrants through a special workshop the ZACC is putting on with Soft Landing Missoula.

Bell said it’s an honor to be the first solo show at the new Youth Gallery and hopes people can feel the joy she feels creating her paintings when they see them on the wall.

“I hope people will see (the show) and feel some sense of joy or at least get a smile on their face.”

Ila Bell's solo show at the Zootown Arts Community Center Youth Gallery will be up for the month of January. An opening reception is set for Friday, Jan. 10 from 5-8 p.m. For more information, visit zootownarts.org/.

An invitation to Missoula's Ballet Beyond Borders ended up being the spark that got Marsha Kwan to put her ballerina slippers back on.