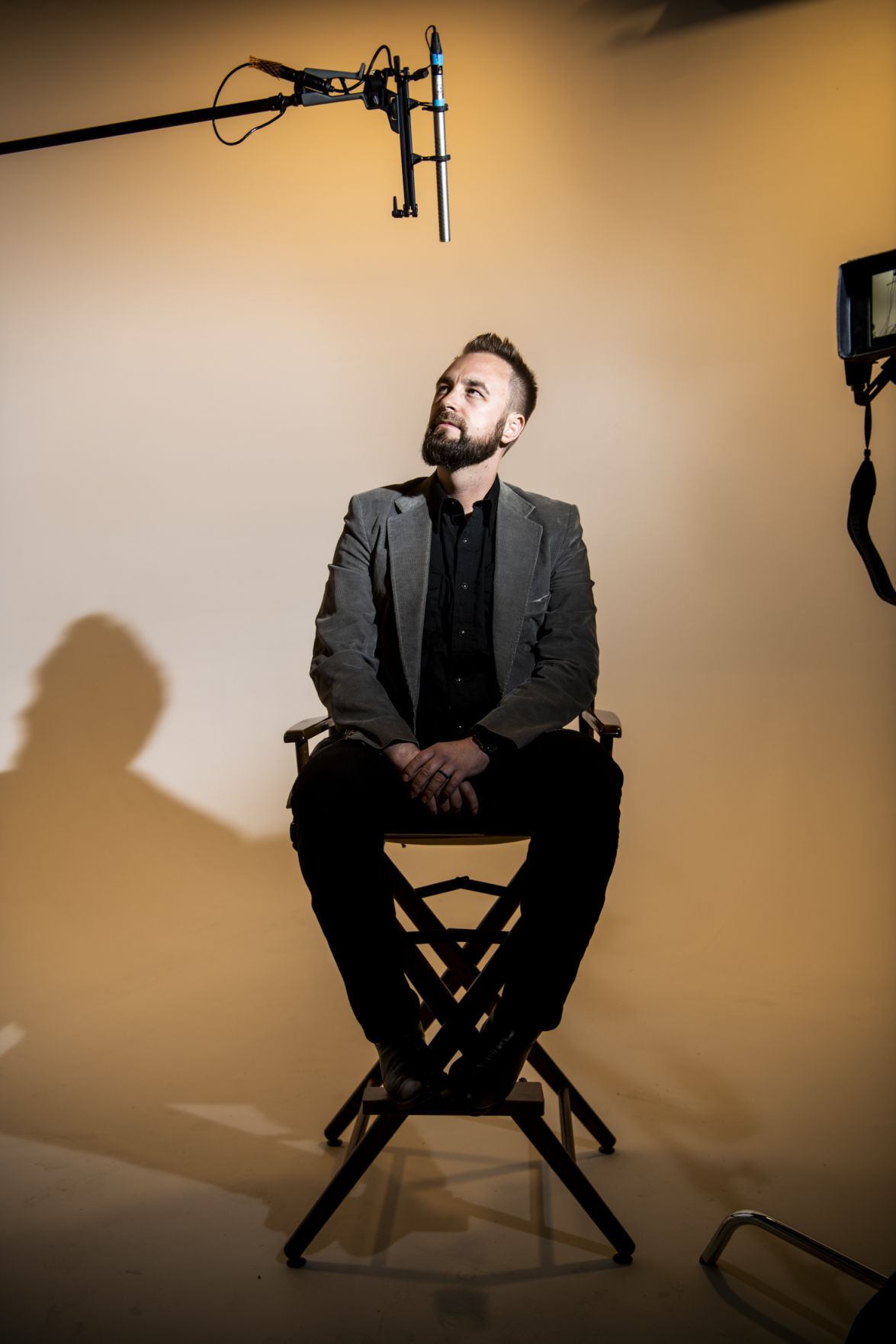 John D. Nilles, co-owner of Treasure State Studios, sits inside the studio for a portrait last week. Treasure State is a new film production outlet in Missoula aiming to "provide services for out-of-state companies and get jobs for locals," according to Nilles. 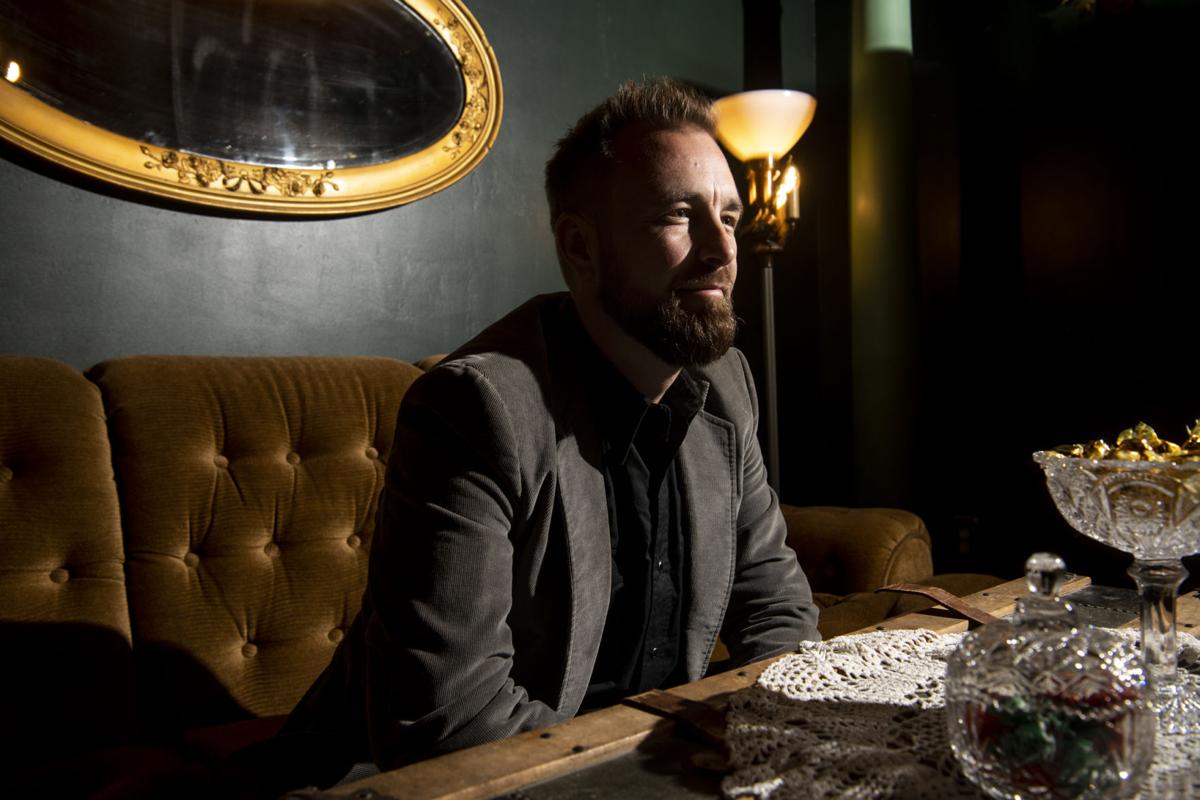 The studio is outfitted with everything from a cyclorama wall to a furnished parlor-style green room, a culmination of a dream the Missoula filmmaker has had for decades.

A new film production outlet has premiered in Missoula.

Treasure State Studios, located on West Harrier Drive, has been renovated and stocked with equipment for shooting, editing and mixing for local and visiting productions.

Co-owner John D. Nilles, a Missoula filmmaker, said they aim to “provide services for out-of-state companies and get jobs for locals,” and also ensure that local filmmakers “have a voice in the growth” happening in their industry.

Nilles has directed a feature film, “Saving for the Day,” along with documentaries, commercial work and music videos. He said this year will see a large increase in film production in Montana, due in part to the backlog caused by COVID, and despite the film tax credits getting raised to $12 million instead of $250 million by the state Legislature.

The other plank on the new studio is to act as a resource for homegrown projects and filmmakers. They’re putting on film production boot camps to add to the base of trained crew for productions, since “we can always use more.”

“We’re also trying to educate and train more crew, so that when they come to town, we can fulfill those needs and are hiring locally instead of bringing someone in from out of state,” he said.

Nilles has his own company, With a Cause Productions, and his partner on the venture is Annie Graham, who he's worked with through the Aspire Media Program for local students.

Local clients include Silk Road’s spice blends; or pro-bono work for the Poverello Center. As an example of the studio’s potential, he said a Georgia-based studio asked them to shoot parts for several “known” (but he can’t say) actors while they were in town.

They’re also working on a program of their own called the Treasure State Grant, that can provide resources to local productions led by Montanans, Nilles said. They’ve given out two so far, offering help on equipment, studio time, crew and post-production, he said.

The studios are located in the back of the former Missoula Winery and Event Center. (It’s pivoting to beer as Cymatic Fermentation Project.)

They’re equipped with a cyclorama wall to create the “infinite white background” used in product and music videos. They can paint it green on occasion if need be, and have LED light panels to adjust to different colors on the fly.

“You can match the color of the brand, or it makes interviews interesting,” he said. They have an Edelkrone motion control system for product videos or macro shots. (They have a macro probe lens, that looks like a cattle prod, and is partially waterproof, that can be used for close-in shots. Think of restaurant commercials where the food looks outsized.)

Their sorted boxes of equipment can all get loaded into a truck and taken off-site to shoot location work. The gear can be rented out for location work or used in the studio. “All the standard stuff that people would expect,” he said.

They built a green room, furnished in a vintage Montana parlor style that feels straight out of a film, plus an adjacent hair and make-up suite with “A River Runs Through It” theme to pay homage to the movie that permanently etched the state into directors’ minds.

Upstairs, there’s the mixing room, with a large screen and 5.1 surround sound. “To mix for a theater, you pretty much need a little theater,” he said.

They’re finishing up an isolation booth to record dialogue, and a Foley pit to do sound effects and music. They’re planning to expand with a second sound stage and more production and post-production offices next year.

“We’re just anticipating the growth and want to be able to make sure we’re providing services [for] when companies come to town,” he said.

The facility is also tied to an educational mission. “The idea is that we have industry standard equipment that works for rentals, but also works for us” in the educational program, Aspire Media, he said. The Aspire High School is an experiential, hands-on program, and eNDVR is a homeschool program for kindergarten through fifth grade. Through the media program, now in its sixth year, they can learn screenwriting, cinematography, editing, sound design and effects. Filmmaking “is one of the most technical art forms there are,” Nilles said, which means the barrier to equipment and education can be high.

“Kids can start learning on industry standard equipment, so when it comes time for them to graduate, they can become interns” and move toward becoming paid-crew gig workers, he said. Graham said the students and interns can get field experience (not grabbing coffee) when they’re 12 and get a head start toward gigs. The hands-on experience is important for kids to get before they get to college, she said, and might be several years into a program before they understand the path they’ve committed to.

Treasure State Studios is hosting the Aspire Film Festival of student work on May 21 at 5 p.m. at Cymatic Fermentation Project, 5446 W. Harrier Drive. They'll screen work by students in the Aspire Media Program and give tours of the studio. It costs $10 or $25 for a family of up to six. It's $5 for food, Cymatic will be serving beer and seltzers.

Roxy Theater will reopen on June 4

The first titles are “Nomadland” and “Minari.”

“It Takes A Village,” at the Missoula Art Park, where it will be on display until October.

Actor Mark Wahlberg will portray Diocese of Helena priest Stuart Long in a motion picture showing the life of a man who pursued careers in boxing, acting, teaching and museum management before joining the clergy, according to news reports.

John D. Nilles, co-owner of Treasure State Studios, sits inside the studio for a portrait last week. Treasure State is a new film production outlet in Missoula aiming to "provide services for out-of-state companies and get jobs for locals," according to Nilles.

The studio is outfitted with everything from a cyclorama wall to a furnished parlor-style green room, a culmination of a dream the Missoula filmmaker has had for decades.