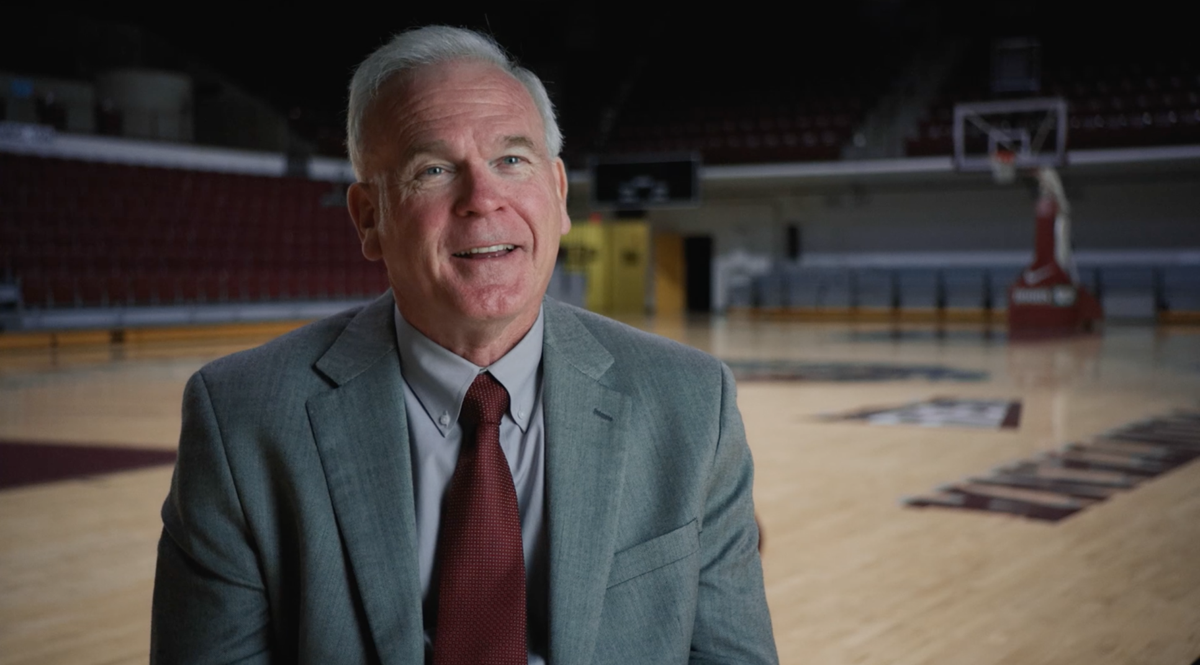 Robin Selvig talks in Dahlberg Arena in an interview during the filming of "The House That Rob Built." The film premieres at the Big Sky Documentary Film Festival on Thursday, Feb. 20, at 6 p.m. at the Wilma. A second screening is set for Sunday, Feb. 23 at 6:30 at the Elks Lodge. 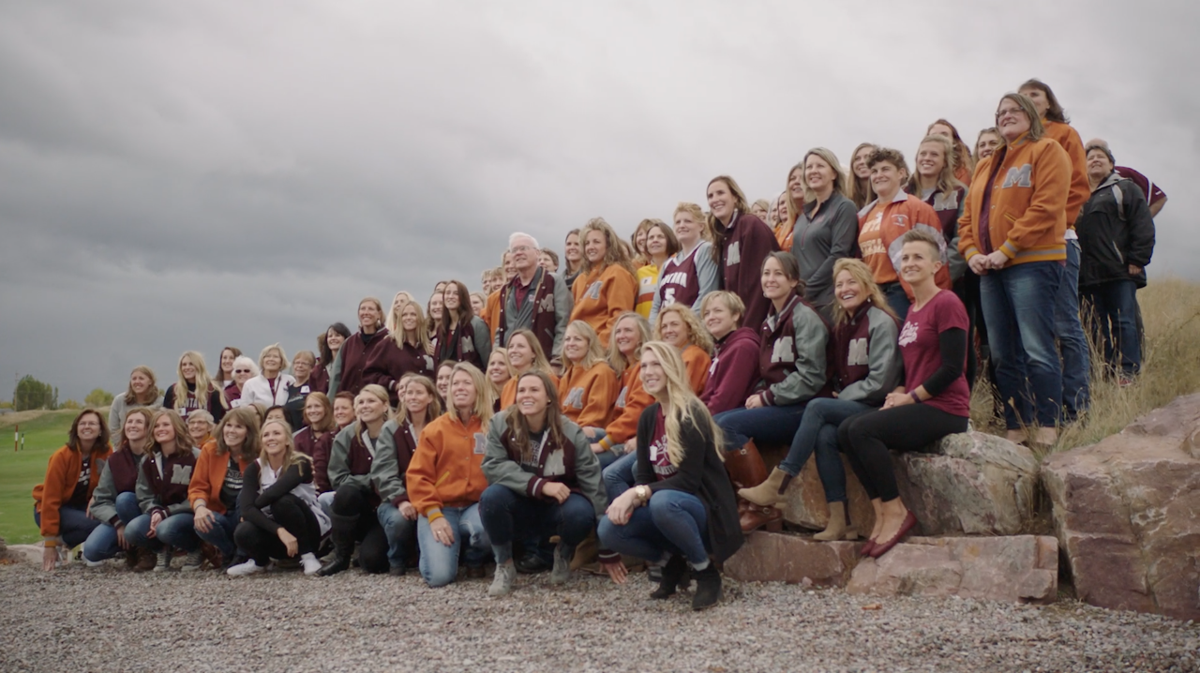 Robin Selvig stands with more than 100 former players who returned to Missoula in the fall of 2016 for a surprise retirement party for the longtime Lady Griz coach.

In a love letter to longtime Lady Griz coach Robin Selvig, a new documentary takes an intimate look back at the career of a man who changed women’s college basketball and captured the hearts of University of Montana sports fans across the state and beyond.

Co-directed by Megan Harrington, who played for the Lady Griz under Selvig in the '90s, “The House That Rob Built” is set to premiere at the Big Sky Documentary Film Festival on Thursday, Feb. 20 (see box for details).

The documentary takes a dive into Selvig’s nearly 40-year reign leading the Lady Griz to 865 wins and building a fan base for women’s basketball that was rare at the time.

When Selvig retired in July 2016, Harrington, who grew up in the Rattlesnake and is now based in Los Angeles, said she called him almost immediately to see if he would be open to doing a documentary.

“I was just thinking about all the mothers and daughters he’s coached, all the different girls who had come through the program from all across the state,” she said. When fellow former player Jeanne McNulty-King organized a reunion that fall, Harrington jumped on the chance to have so many former players in one place at the same time.

A large chunk of the player interviews throughout the documentary were shot during this reunion weekend, as Harrington said more than 100 women showed up representing every decade of Selvig’s career.

“We weren’t telling a story about one season. We wanted to start from the beginning, so having some of those girls come back … to get them on camera was really, really key,” she said.

The women paint a picture of a man who took the reins of the Lady Griz at a time when women weren’t seen as serious athletes and, through passion and grit, inspired generations of players and fans by raising the team to national prominence.

The film uses footage from games dating back to the late '70s, highlighting Selvig’s animated and intense coaching style and spotlighting major career moments, including some of their first sold-out games at Dahlberg Arena, NCAA tournament appearances and Big Sky Conference championships over the years.

The same excitement and electricity that grew as the Lady Griz triumphed throughout Selvig’s career builds throughout the film as well, making you feel as if you’re on the team’s journey with them. The players echo that sentiment, saying how the Lady Griz felt like a sisterhood and a family under Selvig and still does.

It’s also an interesting look back at the women who are interviewed throughout and their time as players under Selvig. They joke about his wild personality on the court and get emotional thinking about the impact he had on them. Many talk about how they likely wouldn’t have gone to college if it weren’t for Selvig.

Through interviews with former Lady Griz Malia Kipp of Browning, among others, the film also spotlights Selvig’s role in giving Native American women across the state prominence on the team.

As Selvig's career progressed, he became a highly desired coach for players, with many of the players interviewed from the '90s to present day saying they had dreamed of playing for Selvig since they were little girls. He also became  highly sought-after, receiving offers from bigger schools throughout his career, but never leaving his home with the Lady Griz.

Harrington said beyond being a portrait of one of the greatest college basketball coaches of all time, the film is a reminder of what sports are supposed to be about and the lessons they teach you about life.

The film puts a big emphasis on Lady Griz fans, who began attending games in droves under Selvig and who he said made the magic on the court possible.

By the end of his career, Selvig had notched 36 winning seasons, 24 conference championships, 21 NCAA tournament appearances and was voted Big Sky Conference coach of the year 21 times, cementing his place in the history books of women’s college basketball and as a legend of the Lady Griz.

Harrington said she believes the film will resonate with sports fans and lovers of inspiring true stories well beyond the state’s borders, but at its core, it’s for Montanans.

“This is for the state of Montana, about something great that happened here,” Harrington said.

Third screening added: Sunday, Feb. 23, at the University Center Theater. Tickets on sale at 10 a.m. Wednesday, Feb. 19, at bigskyfilmfest.org or the festival headquarters at the ZACC, 216 W. Main St.

There are 150 movies playing at the Big Sky Documentary Film Festival, which kicks off on Saturday. Check out our preview coverage to help fin…

'Healing From Hate': Film follows 'formers' as they de-radicalize from neo-Nazi extremism

“Healing From Hate: Battle for the Soul of a Nation,” screens on Saturday, Feb. 15 and Monday, Feb. 17 as part of the Big Sky Documentary Film Festival.

'All That Remains' eyes plight of undocumented workers after Calif. fires

Big Sky Documentary Film Festival: How to find the right films for you

Starting Friday, a total of 150 movies will screen over the course of 10 days at the 17th annual Big Sky Documentary Film Festival, the largest of its kind in the region.

"Personhood" is screening at the Big Sky Documentary Film Festival on Sunday and Tuesday at 7:30 p.m. and 9 p.m.

Big Sky Doc Fest: What films are screening on Monday

The Big Sky Documentary Film Festival heads into Monday with a full line-up of options.

By popular demand, a third screening of "The House that Rob Built," a documentary about Lady Griz Coach Robin Selvig, has been added at the Big Sky Documentary Film Festival.

The Big Sky Documentary Film Festival starts off its final weekend on Friday. These are the movies playing around town.

The Big Sky Documentary Film Festival announced the winners of its competitions on Friday night in Missoula.

Robin Selvig talks in Dahlberg Arena in an interview during the filming of "The House That Rob Built." The film premieres at the Big Sky Documentary Film Festival on Thursday, Feb. 20, at 6 p.m. at the Wilma. A second screening is set for Sunday, Feb. 23 at 6:30 at the Elks Lodge.

Robin Selvig stands with more than 100 former players who returned to Missoula in the fall of 2016 for a surprise retirement party for the longtime Lady Griz coach.