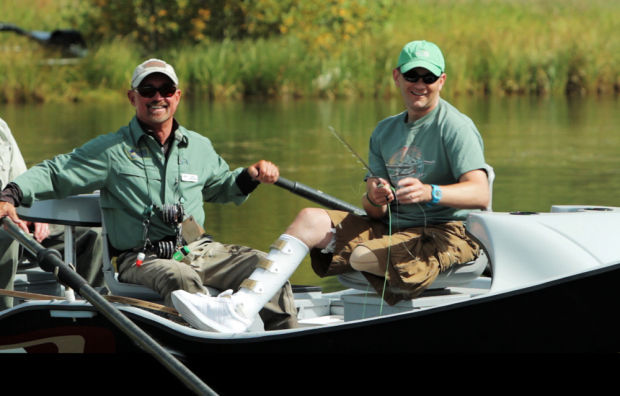 Marine Capt. Blake Smith, who was severely wounded while piloting a helicopter in Afghanistan, fishes with a guide in “Not Yet Begun to Fight.” 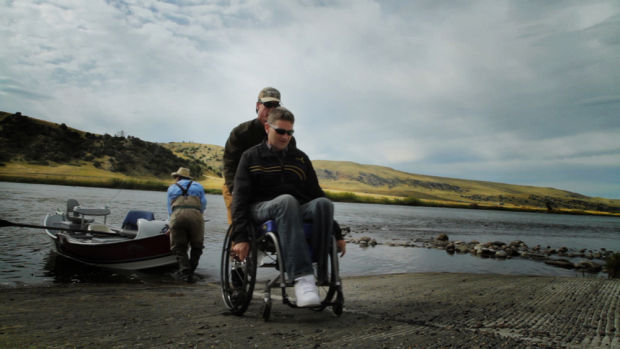 Smith has limited mobility in his legs after breaking his back following a midair collision in Helmand province.

It’s a deliverance from the mental damage he suffered flying fighter jets in Vietnam, where he’d look down on looping streams that cut through war-ravaged jungle and think of casting a line.

“Fly-fishing is a constantly repeating series of occasions for hope,” the founder of Warriors and Quiet Waters says in a new documentary, “Not Yet Begun to Fight.”

“I came back from combat and it became an absolute, desperate physical and mental need,” he says. His calm, fatherly demeanor cracks a little when he adds, “And I had to do it or I was gonna kill somebody.”

The Bozeman resident founded his nonprofit to serve the record numbers of enlisted men and women returning from Iraq and Afghanistan – taking them out on the water to share some of the tranquility that helped him decades before post-traumatic stress disorder was even acknowledged.

The filmmakers join Hastings as he flies in a small group of injured veterans to Bozeman for a multiday guided fishing trip on the Gallatin and Yellowstone rivers. Over the course of an hour, you meet five veterans, some of whom have injuries that are more visible than others, and hear their stories.

The movie, expertly directed and photographed under the guidance of Bozeman residents Sabrina Lee and Shasta Grenier and a small Montana-based crew, is more powerful for its protracted scope. There are no clips of wartime, no CNN reports, only the troops talking candidly about their experiences. Only at one point can you even hear an interviewer pose a question.

The film takes its title from one of these soldiers, Elliot Miller, who has the phrase “I have not yet begun to fight,” tattooed in a sleeve on his arm.

From his first appearance in the film, you know it’s more of a mantra than a statement of fact.

The Navy SEAL was on a routine sniper watch in Ramallah, Iraq, when he came under fire. He was shot, and while he was being removed from the area an Iraqi soldier they were training stepped on a pressure-plate mine. It “blew us all to hell, or at least that’s what I was told had happened,” he writes.

He lost a leg, but it was the 4 1/2 pints of blood that scarred him. The subsequent lack of oxygen to his brain deprived him of all his speech except a handful of wordless sounds. Those communications are easily understood by his wife, Amy, who accompanies him on the trip, and speaks candidly about their relationship.

For Miller’s interviews, the crew sets up a table alongside the river, where the still-burly SEAL patiently uses one hand to type his responses on an iPad, which has an app to read them aloud in a halting, robotic British accent.

After his arrival, fishing guide Collin Brown begins working with Miller on basic casting, a steep curve since his 10s and 2s are confined to a flick of his wrist from his wheelchair. But he’s determined to cast on his own.

If he learns how, “I don’t care if he catches a fish or not, that’s a huge feat for him,” Brown says.

Marine Capt. Blake Smith, meanwhile, acknowledges his extensive wounds with friendly banter and gallows humor that distract from the severity of the accident he survived.

Prompted to describe his wounds, Smith asks, “You got awhile?”

He’s paraplegic with his left leg amputated above his knee, in addition to numerous other broken bones and surgeries.

A pilot, he was in Afghanistan’s Helmand province on a night mission when his helicopter collided with a fellow escort. He was thrown through a cargo door and came to on the ground near the burning aircraft. He wasn’t the only one injured, and many were killed.

Smith normally puts on a joking face – he says he wants his next artificial leg to have a built-in bottle opener to impress girls – but in a private moment he vents:

“It’s shameful. It’s shameful to think that these people all think you screwed up and killed four good dudes. Even if you didn’t, it’s shameful.”

Hastings flat out says Smith will never get over the incident or the recurring nightmares. All you can do, he says, is go fishing. At least it “puts some salve on the wound.”

Smith says he doesn’t miss anything about war except the firefights, and he still dreams of flying, even though he doesn’t know how he’ll take to it once he’s back in the pilot seat.

“I don’t know whether or not I can fly. And I’m kind of worried about finding out. Finding out I can’t. I have a lot of fear, about what I used to do and what I do now.”

More than most of the men, Erik Goodge and Mark Hupp take to fishing with the intensity of someone discovering a lifelong hobby in the midst of adulthood. Goodge, an excitable and hilariously foul-mouthed Marine corporal, lost an eye in Afghanistan.

He can’t wait to get back.

He finds it’s a little like that, at least while fishing, as does Marine Staff Sgt. Hupp, a bomb technician. He appears to be physically uninjured but plainly states he’s surprised he hasn’t yet self-destructed. The 27-year-old estimates he’s had PTSD for about five years – what Hastings calls an intractable wound that taints the soul.

By the trip’s end, his steely demeanor has loosened and he’s visibly enjoying the temporary community created on the river. It’s a bitchin’ time, he calls it.

“You know this river healed me. To watch this kid come up here and be able to do that, it’s a privilege to be a part of that,” Hastings says.

After spending only an hour with them, and hearing plain candor about their dreams, difficulties and plans for the future, you’ll likely feel the same.

Entertainer editor Cory Walsh can be reached at 523-5261 or at cory.walsh@lee.net.

“Not Yet Begun to Fight,” directed by Sabrina Lee and Shasta Grenier, United States, 60 minutes. Playing at 6:45 p.m., Friday, Feb. 22, at the Wilma Theatre.

Ten years, more than 100 films. The Big Sky Documentary Film Festival has come far since its debut in the Roxy Theater a decade ago.

Depp Out Of 'Fantastic Beasts' Franchise

Depp Out Of 'Fantastic Beasts' Franchise

Marine Capt. Blake Smith, who was severely wounded while piloting a helicopter in Afghanistan, fishes with a guide in “Not Yet Begun to Fight.”

Smith has limited mobility in his legs after breaking his back following a midair collision in Helmand province.