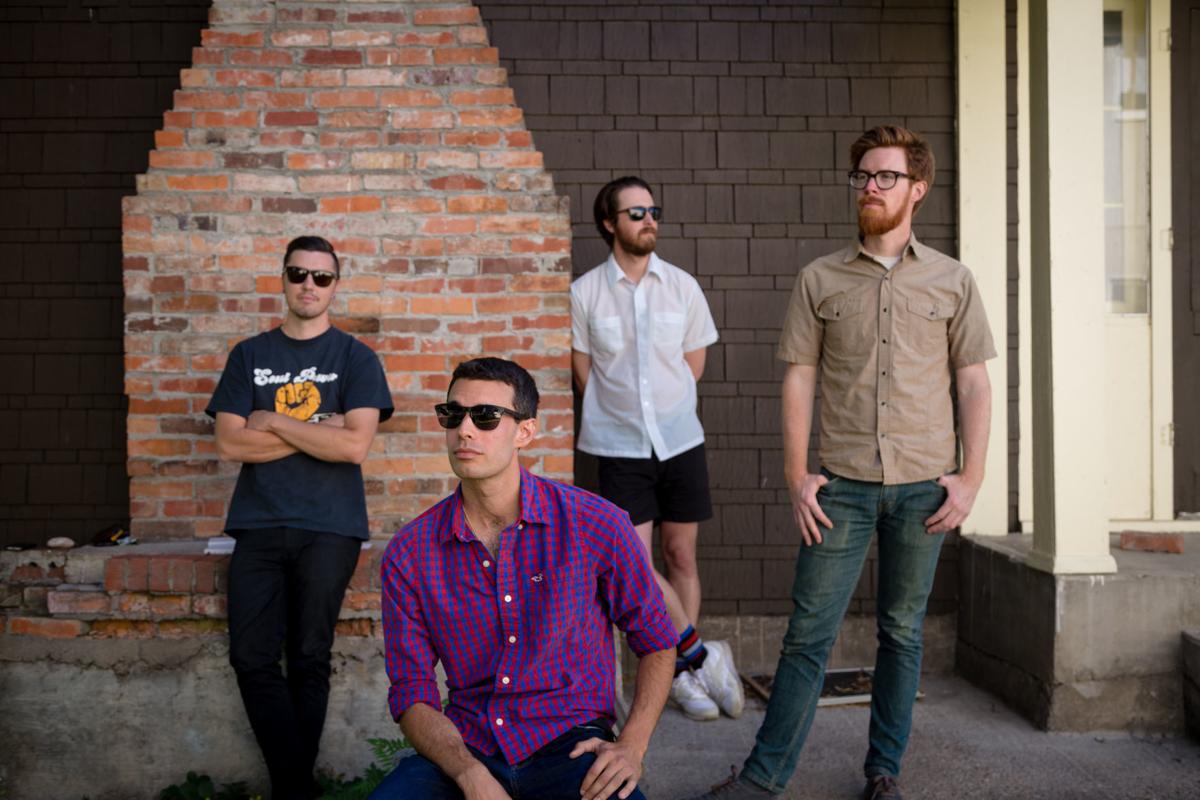 From left, Cove Jasmin, Valley Lopez, Brady Schwertfeger and Jake Whitecar, of Middle Sea. The local indie rock group released a debut album in September and is set to perform at the VFW on Saturday. 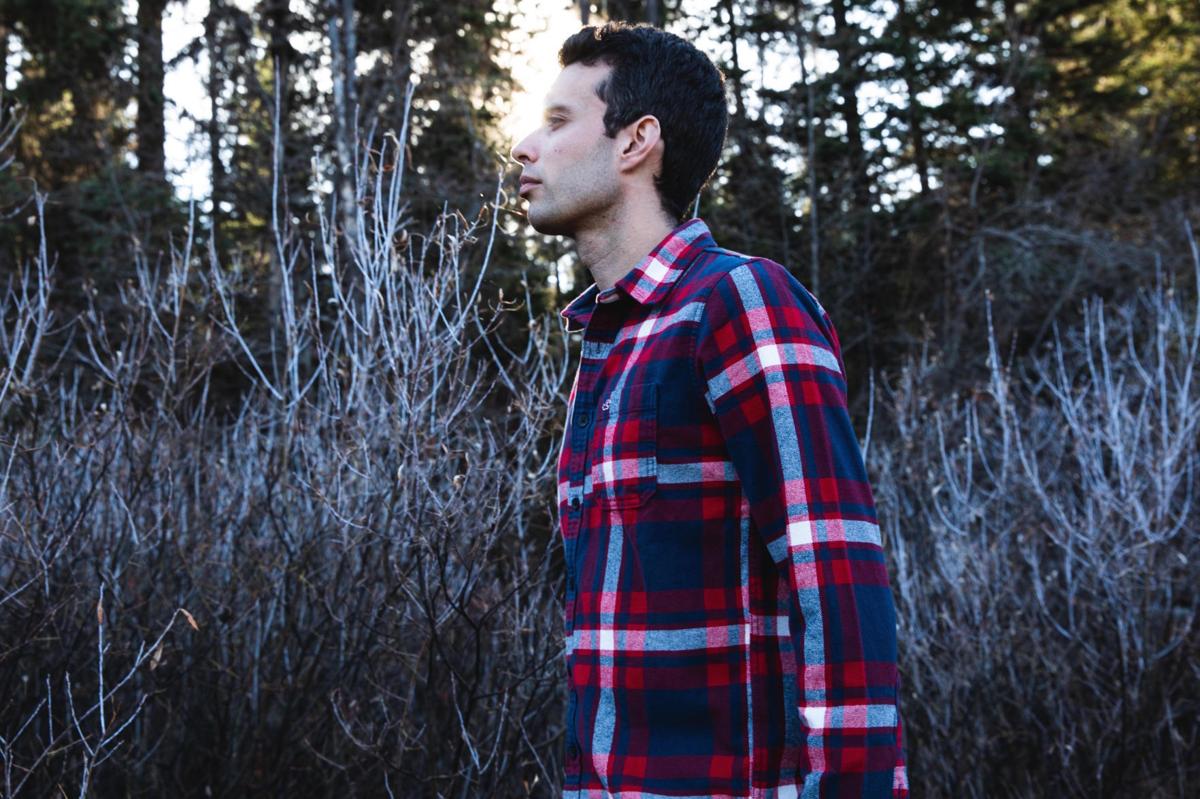 Valley Lopez, whose brainchild is Middle Sea, wrote the music and lyrics and played nearly every instrument on the nine-track album over the last seven years.

From a songwriting exercise in 2013, to releasing a debut album last year, local musician and songwriter Valley Lopez and his band Middle Sea have been on a decade-long musical journey exploring sound, time and feeling.

The four-piece indie-rock group will play at the VFW on Saturday, the band’s second show since the “New Blue Winter” release party at the Top Hat in September.

Lopez, whose brainchild is Middle Sea, wrote the music and lyrics and played nearly every instrument on the nine-track album over the last seven years. At some point, he isolated himself in a rented Airbnb on the San Juan Islands, determined to finish the album.

“The room ended up being terrible, so I stayed in the bathroom and just recorded vocals for like three days straight,” Lopez said, adding the vocals for three of the tracks on the album were recorded in that bathroom.

After touring with bands as a drummer, Lopez's dream of writing an album and forming his own band started more than a 10 years ago and was kicked into gear with a songwriting exercise inspired by one of his favorite bands, Phoenix.

The French indie-pop outfit went on a writing spree and collected 70-some songs, picking 10 of the best ones for their 2013 album “Bankrupt!” So that same year, for 70 days, Lopez spent four hours a day working on a song idea. The next day, he’d start fresh with a new concept and spend four more hours on that song.

“These weren’t like fully-formed songs, sometimes it was just a musical idea,” Lopez said, calling the exercise somewhat of a songwriting boot camp. “I wanted to not really dwell on stuff and to just put something down without a lot of time and then move on.”

Over the next several years, Lopez continued to write and record bits and pieces in several different locations, curating several songs he thought could make for an album. In 2014, he created a Kickstarter to help move the recording process along.

Just when he’d gotten to the point where he was ready to find a producer, he hit a roadblock. In 2017, Lopez hired a local producer he declined to name and the two started working together.

“Then he disappeared and I had already paid him,” Lopez said, adding the stolen money forced him to enter a legal process that delayed the album.

“I was really excited about it, and it set everything back quite a bit,” Lopez said. “The good news is that I got my money back.” He also ended up with two new partners, local producers Jake Whitecar and Jon Filkins, who he said made the album much better than it would have been with the original producer he was working with.

As it got towards the end of tracking and production, Lopez started to think about who might be a good fit for a band to play the album live.

What ended up as Middle Sea is a melding together of musicians from several well-known local bands, including Brady Schwertfeger of Norwell and Arrowleaf, Cove Jasmin of Shakewell, and Whitecar of Mendelssohn, who is also a co-producer on the album.

“Everyone kind of switches it up in our show at different points and plays different things,” he said. “When you play multiple instruments, I think it really heightens your understanding of what it’s like to be in someone else’s position, which is really valuable.”

And while Lopez wrote all the music and recorded most of the album on his own, he said it was always the plan to tour the album with a live band.

“I feel like they make me sound 100 times better than I would if I tried to do anything myself. It’s just so much more fun playing music with people than it is playing alone.”

“New Blue Winter” is an exploration of the way life changes through the seasons and over the years, Lopez said, adding he moved around a lot as a child and identifies with the different "atmospheres" and "vibes" he’s associated with the places he’s lived.

“Each season, I often sit and reflect back on where I was in that same spot the year before ... and I think about how I felt in those places and how I feel now and how those two things are either related or not related,” Lopez said. “It’s this cyclical thing when every year I come back to these points and often it’s that changing of the seasons, on that first day when you walk outside and you’re like, ‘Wow summer’s here, spring is here, fall is here’ and it just feels different.”

While much of the album is somewhat soft and somber, a few of the tracks have more of a pop sound, reflecting the changing moods Valley explores throughout.

“What We’ve Done” opens the album, and Lopez said it’s the only track where he had the lyrics first and had to write the music second.

With fun, bouncy piano and horn parts, “Nobody Knows” has a melody that might get stuck in your head.

The songs include a mix of organic and electronic sound, which is showcased in “Sometimes” and “Late 2010,” an instrumentals-only track.

Looking back now, Lopez said it’s ironic only one of the tracks from the 2013 songwriting exercise, “Our Little Breaks,” made it onto the album. The song is about Missoula, and its meaning has changed since he first put the idea down seven years ago, he said.

Lopez is glad to have his decade-long project done and out in the world, adding when you work on something for that long, part of it is like getting a monkey off your back.

“I think a big part of finishing the album was being happy that it was done, but also being super ready to move on.”

He plans to continue to play live shows with Middle Sea around western Montana, with the ultimate goal of touring down the West Coast. He’s also ready to dive into writing again, with new ideas and sounds.

“I definitely have a goal to try and release a new set of songs at some point this year.”

Arrowleaf and Emzee and Silas will open. The 21+ show is free and starts at 9 p.m.

Here's a guide to some of the shows coming up in Missoula this week.

The fundraiser, set for Sunday at the Top Hat, features dinner, drinks and six storytellers who will reprise their tales from the Tell Us Something archive.

Industrial Arts MT, a new effort from three Missoula arts entities, has formed and is looking for a potential space for their complementary activities.

The exhibit in the Blackfoot Communications Gallery opens Friday and is a partnership with Soft Land Missoula featuring works from Moses Bushiri, and brothers Luc and Lorenzo Mugondozi.

There are two parts to the Missoula Art Museum's Benefit Art Auction: The pieces auctioned by a professional, live on stage, and the silent po…

From left, Cove Jasmin, Valley Lopez, Brady Schwertfeger and Jake Whitecar, of Middle Sea. The local indie rock group released a debut album in September and is set to perform at the VFW on Saturday.

Valley Lopez, whose brainchild is Middle Sea, wrote the music and lyrics and played nearly every instrument on the nine-track album over the last seven years.