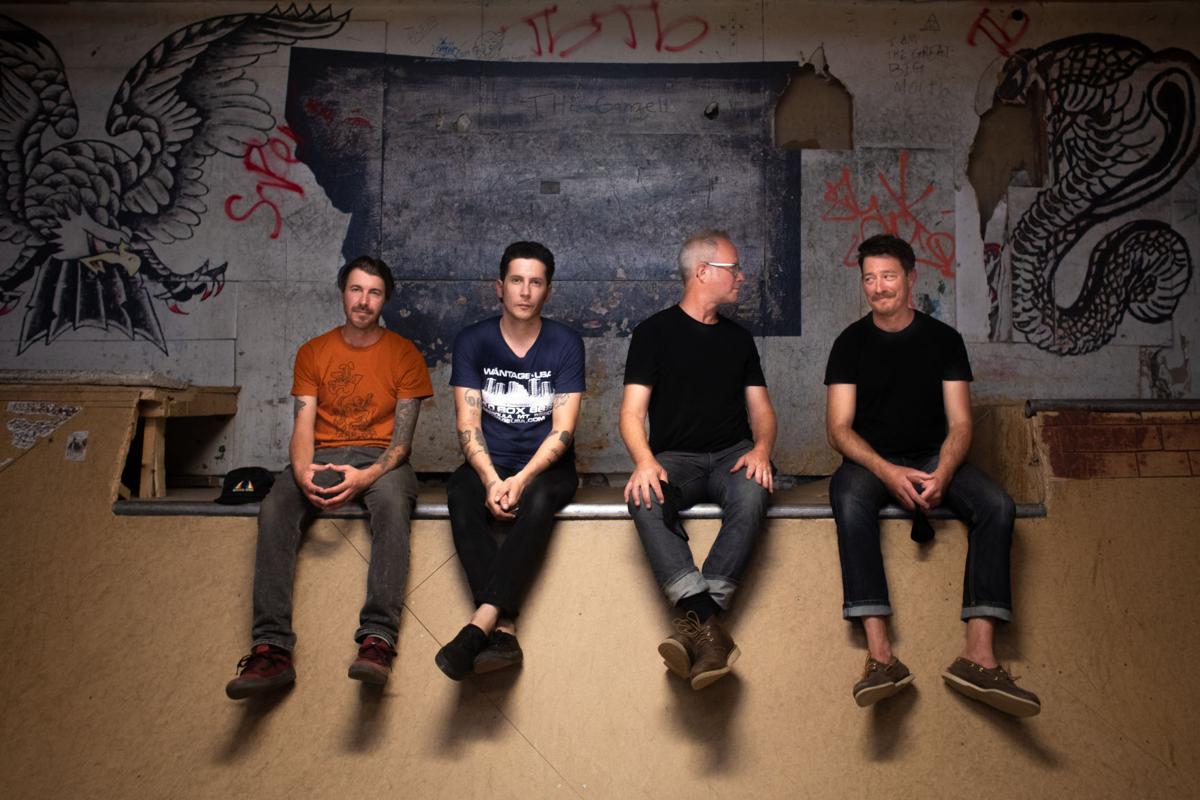 Missoula post-punk band MASS FM sit on the Board of Missoula skateramp just before their band practice. The band is made up of Chris Bacon, left, Chris Baumann, Doug Smith and Ryan Weingardt. The band will be performing for the first time in months in a livestream from the Zootown Arts Community Center on Saturday, Aug. 22. 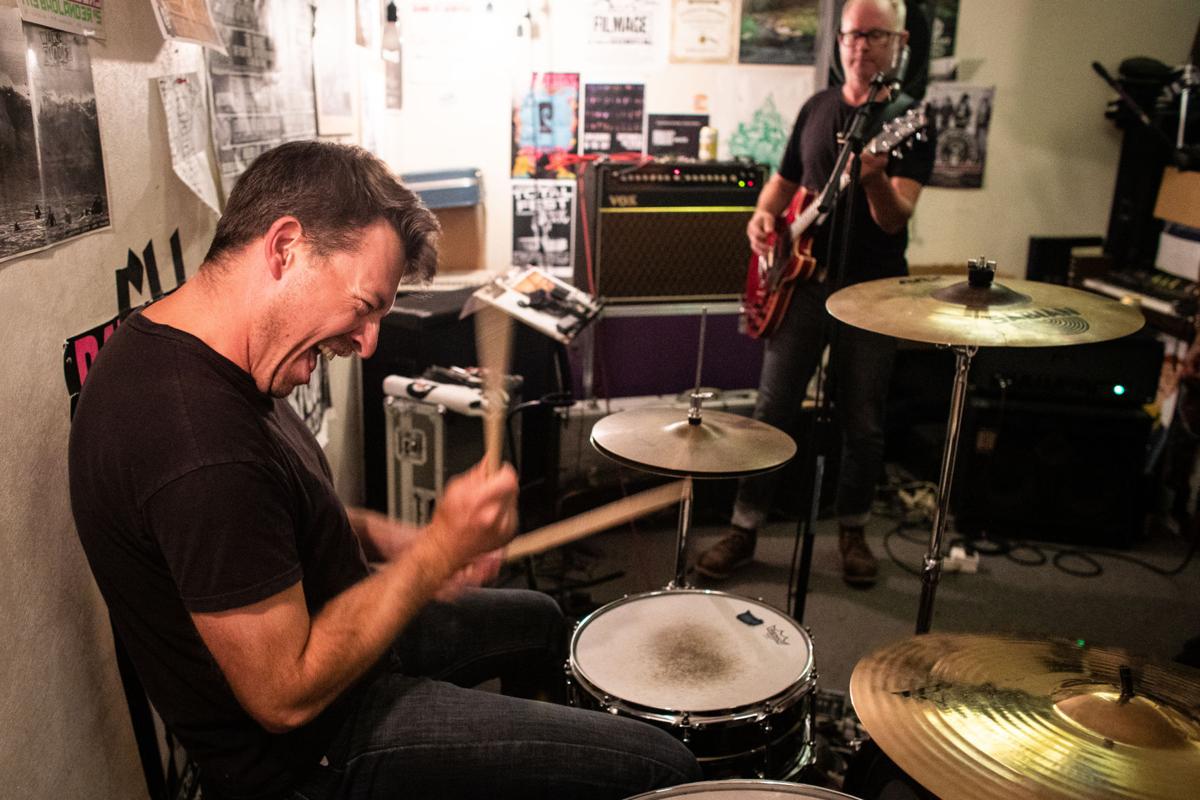 MASS FM drummer Ryan Weingardt jams out during the band's Aug. 13 rehearsal while Doug Smith sings lead vocals across the room. The practice was the band's first since the shutdown, and comes ahead of their Aug. 22 livestream concert. 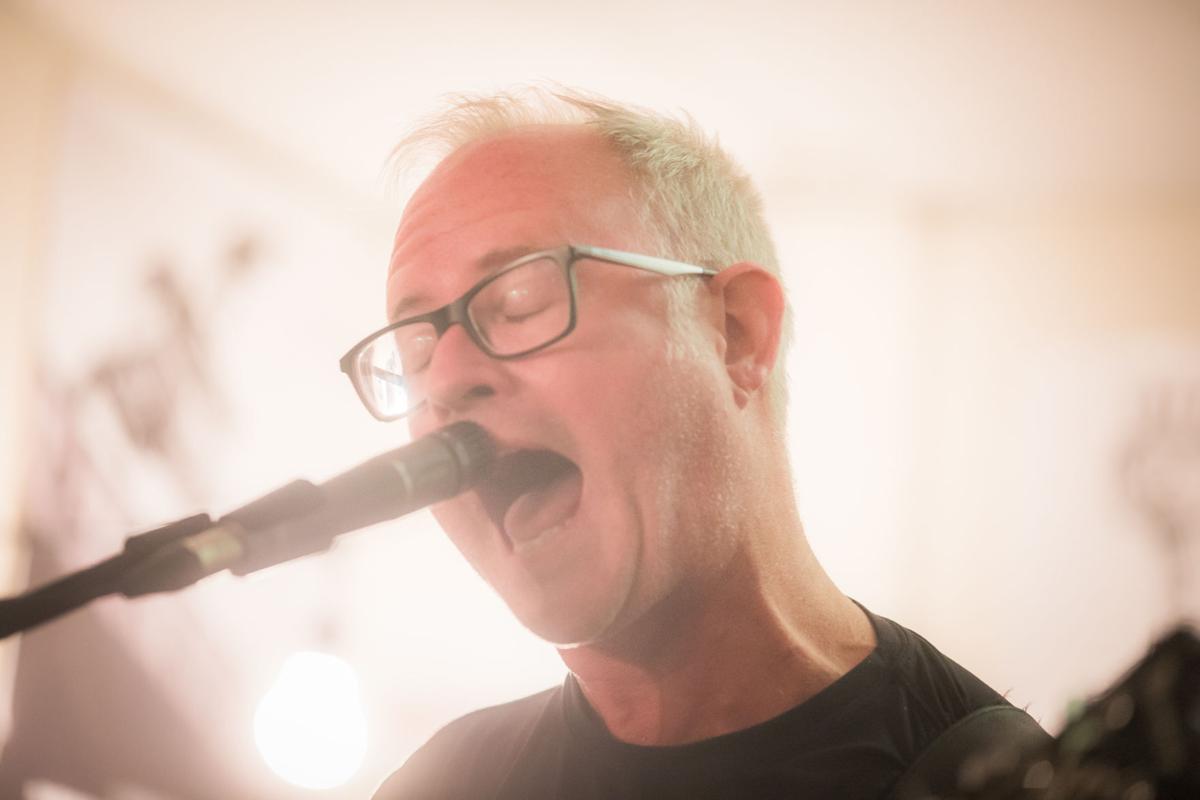 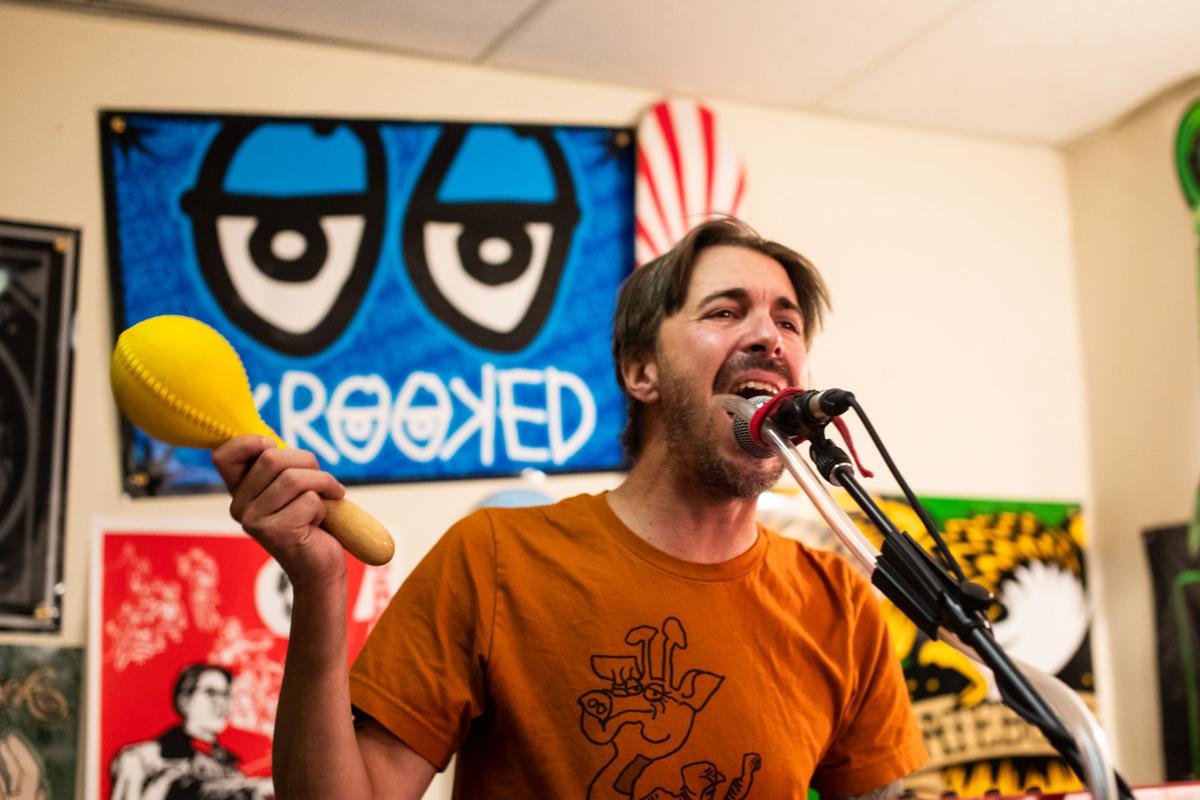 MASS FM's Chris Bacon sings backup vocals, plays the keyboard and shakes the maracas for the band's third song of their practice on Aug. 13. 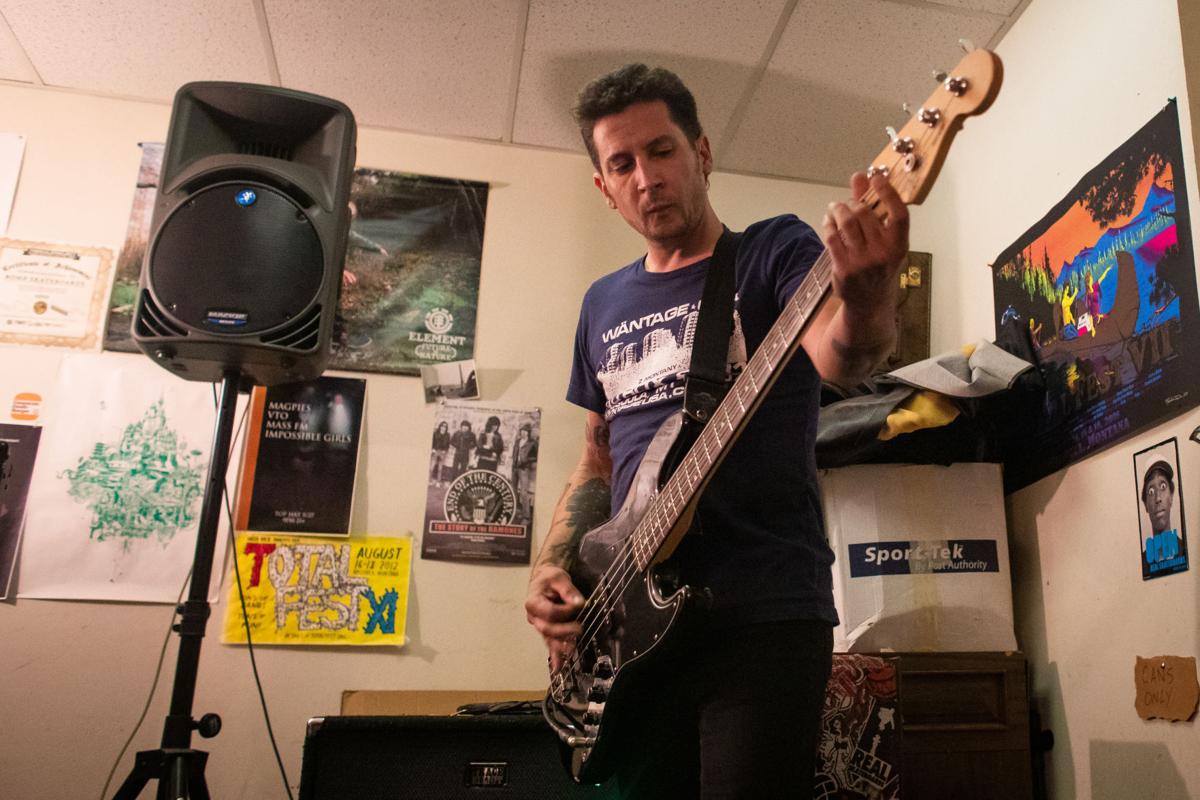 The stay-at-home order in Montana ended in April, yet for local musicians, the places to play live remain mostly limited to outdoor gigs or live-streams, depriving some of a creative outlet and others of much-needed income.

Doug Smith, a guitarist and vocalist, has played in bands in Missoula for decades, going back to space-age new-wave band Volumen. About seven years ago, he formed MASS FM with synth player Chris Bacon, also from his former group, along with bassist Chris Baumann and drummer Ryan Weingardt.

None of them rely on income from the group, making it a relatively low-pressure scenario that's aided its longevity, and they record with Baumann, an engineer, when they feel like it. In June, Alternative Press featured them as the Montana pick for a list of 50 best unsigned bands, one per state.

Local gigs, though, are a social event in addition to a creative outlet, and he's eager to play again on Saturday during a "Social Distance Sessions" live-stream with the ZACC, the Zootown Arts Community Center, and MCAT, regardless of some nerves about not having an audience in front of the stage.

They're going to focus on "being fun and trying to provide some entertainment and relief for a weird time," he said.

He doubts that they would play in another set-up besides the ZACC, or perhaps a backyard or outdoor gig, until the safety situation changes drastically.

"I'm still a little leery getting into a crowd of people," he said. Bars, where people need to take masks off to drink and likely loosen their inhibitions, make him uncomfortable, since he has a family to consider.

That means Saturday's show is their first gig perhaps since last fall, outside of physically distanced practices they picked up again in June to shake off the "quarantine fatigue."

Smith said they've been talking about various ways to add visual energy — projections, dressing up, etc. — so that it doesn't feel like "a glorified practice."

He thinks bands may have to learn to accept the pandemic as "a time of respite," to take a step back and work on new material, since the normal concert experience may not return until spring at the earliest.

For his part, Smith spent the lockdown phase furloughed from work and headed into his home studio. "It was the first time I'd been actively creative" at songwriting in several years, with nine to 10 new songs that he might release a "COVID-19 solo album," although he worries that everyone will already be doing something similar.

The band is working on them, too, and he thinks that the restrictions might "push people into new creative outlets."

Earlier this summer, the ZACC sent out a survey of performers of all types to get responses about the effects of the pandemic on their creative work and finances, and various scenarios in which they'd be comfortable performing again, in particular at the new Show Room space it has on West Main Street.

Part of the nonprofit ZACC's mission includes supporting live music, and they wanted responses from performers before proceeding. In March, before state and county orders quashed live performances, there were open debates online about bands trying to move ahead with concerts.

Many of the 75 respondents' survey answers were heart-breaking, said Mikyla Veis, the marketing, events and community outreach coordinator for the ZACC. One person said they'd lost two-thirds of their income. Others were selling instruments or tapping into retirement money to pay bills. Some qualified for unemployment. Many said they were lucky they had another job or a partner to rely on. Some expressed frustration that creative projects were put on hold, such as an album they could no longer continue to record.

Many were very eager to perform again. "They're artists, and they want to make art," Veis said. Yet fewer expressed interest in attending an in-person event themselves. After reviewing the answers and examining their options, the nonprofit ZACC designed the "Social Distance Sessions." Logistically, bringing people together inside or outside isn't sustainable for them, so they teamed with MCAT, which has the technical capability, to stream shows on Saturdays, with an online fundraising component to go to various causes (including the performers).

September is already booked up, with the months through November coming into place as well. It's not just music — in the weeks ahead, you can expect musical theater shows, dance and more.

"People just seem interested in being able to perform in whatever way is available, and this is the way that's available," Veis said.

It's a stark contrast to late February, when, on a single night, crowds packed into the ZACC, the Wilma and the Missoula Art Museum for live music, a level of momentum that she believes will likely take a long time to rebuild. During winter, options like the "Social Distance Sessions" might become the only substitute for that once overflowing list of options for performing arts events. They're thinking about ways they could potentially have limited-capacity audiences, or live-stream shows with multiple acts on a bill, all of which require more logistics to go over.

Solo artists have, in some cases, headed to stages at outdoor venues.

Last Friday, he headed to Ten Spoon Winery and Vineyard. He's played there regularly for years — it has a spacious and scenic property in the Rattlesnake that's ideally suited to the requirements of COVID-19. The crowd can disperse to spaced out tables, and he's seated away from them. Masks are required in the tap room.

He said it's set up to be "completely safe, and I feel comfortable" there.

Between the weather and the audience, he said it was "beautiful," and his guitar style suits the open air.

He plays gigs outside of Missoula as well, provided it's either outdoors or in a room he's familiar with that's properly arranged for social distancing.

Others have been less eager to play live yet. Typically, Caroline Keys spends her summer in “go-go-gig-gig-gig” mode, as she called it, playing in and out of Missoula.

This year, she’s turned down all the public and private gigs that “ask people to gather specifically to see/hear music,” she said, saying that it feels too risky for performer and audience.

“As much as music brings joy to all parties, I cannot stand the idea of anyone getting sick as the result of coming to an event where I played,” she said.

She has signed up for “wallpaper gigs,” performing in a private, controlled environment, such as background dinner music outdoors with tables distanced from each other and no more than 12 listeners at a time.

She and multi-instrumentalist Nate Biehl are playing a livestream on a Mountain Line electric bus, a new collaboration the transportation system is starting up.

Instead of gigging so much, she’s been focused on spending time outside and hopes those become “generative” experiences for writing later this fall and winter, although thinking about cold-weather months without in-person collaboration has caused her “major dread.”

The Zootown Arts Community Center and MCAT are streaming “Social Distance Sessions” live from the Show Room on Saturdays. To watch MASS FM’s set on Aug. 22 at 7:30 p.m., go to the ZACC's Facebook Live, and MCAT's YouTube Channel and Local Live website. They suggest donations via Givebutter (Venmo, credit/debit or Paypal) at givebutter.com/zvCDqK.

“Support Our Roots” week kicks off Monday and is meant to be a safe alternative to the city’s two-day music and arts street festival.

Even in this year of pandemic weirdness, history teachers don’t have to rethink how they teach the U.S. Constitution. Algebra doesn’t look muc…

Missoula post-punk band MASS FM sit on the Board of Missoula skateramp just before their band practice. The band is made up of Chris Bacon, left, Chris Baumann, Doug Smith and Ryan Weingardt. The band will be performing for the first time in months in a livestream from the Zootown Arts Community Center on Saturday, Aug. 22.

MASS FM drummer Ryan Weingardt jams out during the band's Aug. 13 rehearsal while Doug Smith sings lead vocals across the room. The practice was the band's first since the shutdown, and comes ahead of their Aug. 22 livestream concert.

MASS FM's Chris Bacon sings backup vocals, plays the keyboard and shakes the maracas for the band's third song of their practice on Aug. 13.