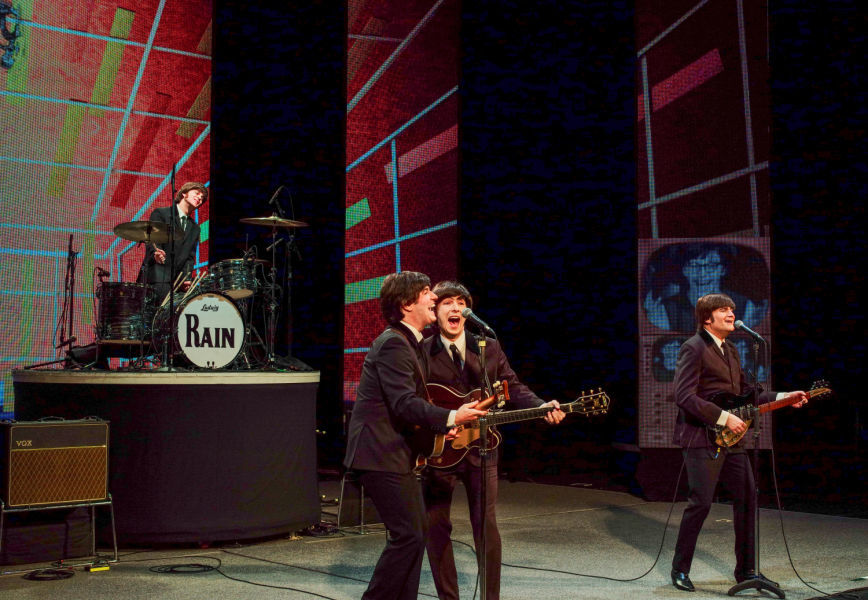 Rain performs as the 1964 Beatles with Aaron Chiazza as Ringo, Paul Curatolo as Paul, Alastar McNeil as George and Steve Landes as John. 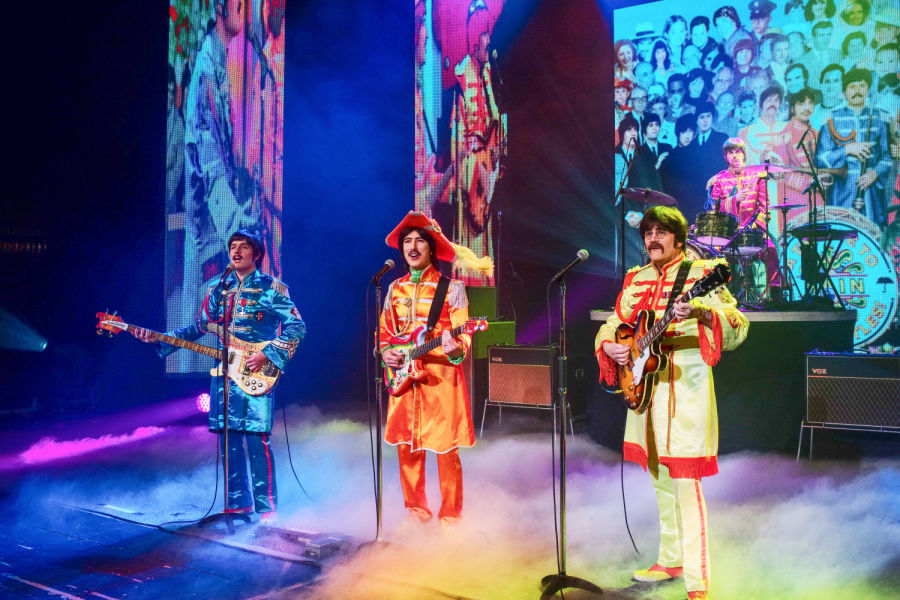 Rain is a longtime Beatles tribute band who have performed internationally and on Broadway embodying the Fab Four, from wearing wigs and costumes to recreating songs note-for-note, from early hits to psychedelic deep cuts.

Steve Landes has played John Lennon since 1998 and helped start the Broadway run in 2010. He now helms the touring show with three other members (along with a keyboard player) and a touring group that puts together their lighting, costumes and Broadway-level production that follows the Beatles career chronologically.

Landes spoke with the Missoulian in advance of the group’s visit to the Kettlehouse Amphitheater on June 18. This interview has been condensed and edited for space.

Do you think you’ll ever get tired of the band? Or have you yet?

I really haven’t. There are trying parts of the peripheral stuff. The living on the road, being away from home, that kind of stuff can be tough sometimes. But you get out there on stage, curtain goes up, you see an audience full of Beatles fans just like me and play this music, and all of that other crap just washes away.

With each year, I kind of enjoy it more, or at least in a different way than I ever have before.

In your two decades with Rain, what’s the most interesting place you’ve played a show?

Obviously Broadway, and the West End, London’s version of Broadway, was pretty cool. Not only was that cool cause it’s their version of Broadway, but the venue we played, the London Palladium, is where the Beatles played. Anytime we get a chance to play on the same stage as one the Beatles played is pretty cool. That was one of the most beautiful theaters in London. They played there in 1963 and that’s where, the next day, the journalists referred to all the screaming girls and everything that was going on around it as “Beatlemania.” That’s where that term got coined that night.

We’ve played on, probably six stages that the Beatles have been on. The Olympia theater in Paris, Circus Krone in Germany, the Cavern of course in Liverpool, the Empire Theater in Liverpool. It’s a rarity when it happens, because in the grand scheme of things the Beatles didn’t really perform all that much. For one thing, they were only together for eight years, much less that their performance years, they’d ducked into the studio by ’66 and weren’t performing anymore.

It’s kind of rare to perform on the same stage that they did.

How much has your show changed over 20 years?

It has changed a lot. For one thing, I’m the only hang-over from the (Broadway) cast. Our cast right now is pretty young guys in their 20s and 30s, so we can really keep the look of the early Beatles, or at least the way people remember the Beatles. This lineup has been playing the show for about six years now.

The really cool thing is, the original guys, they were in the band for 20, 25 years and they gained an expertise of playing these songs and really mapping them out, figuring out who’s playing what on the record. That’s really an expertise unto itself because you can’t look at sheet music for this kind of thing. You have to have the ear to listen to the records, recognize who’s playing what, what the chords are, what the chord progressions are, the original phrasing.

The original guys handed down that knowledge to these young guys, so you have the best of both worlds: the knowledge of over 30 years of playing this music combined with that youthful energy and the look of the young Beatles.

We try to, at least every two to three years, change up the song list that we perform. Because A) there’s so many songs to choose from, we couldn’t possibly put them into one show and B) we do get a lot of repeat business. A lot of Beatles fans, we’re blessed that they want to keep coming back to see our show again and again, so we try to give them a new show.

We were kind of doing a best-of, just greatest hits, until a few years ago when we decided to do the whole "Sgt. Pepper’s" album as the whole of our second act, which we had never done. But of course, for the 50th anniversary, it’s such an iconic album we thought, "Let’s do it."

Now we’re keeping the best of "Sgt. Pepper," all of the songs that worked well with the audience and with the show and now it’s the 50th anniversary of "Abbey Road," doing the best of that stuff.

Has your performance and embodiment of John Lennon and the Beatles changed over the years? Or did you bring that fully formed when you joined Rain?

It helps that we’re Beatles fans, too, that that’s why we do what we do. We’re always watching every new video, every new film, every new piece of information we can get that comes out, watching that stuff, absorbing it and learning it.

Look what we did there, I want to put that up on stage. Look at how he’s looking at the other guy, I gotta remember that for tonight. You might be 99.9% of the way there, but you want to go the full 100%.

We were really good at it always, but we’re always striving to get perfect.

What have you learned about the Beatles by playing their music night after night, note for note?

It’s one thing to be a Beatles fan and listen to this music and think to yourself, “they were really great.” And certainly that’s possible, but to be a musician and to make a living playing their music, these amazing melodies and lyrics come out of my mouth every night. I’m just amazed that guys from Liverpool, England, in the ‘60s, in their 20s, were able to create such beautiful melodies and lyrics. Songs that touch the heart and speak to the mind in a way that’s timeless. As somebody who aspires to be a songwriter, to listen to the way in which they put together songs was incredible.

And then as a musician, I always say, as much as people love the Beatles, as high on a pedestal we put them, they are still underrated as musicians and as a band. There was a tightness to them, two guitars, bass and drums that people don’t realize.

I hope that when there’s a live visual, i.e. us up onstage performing this music, I hope our audience sees all the things that we’re doing to make this music happen and they realize, wow the Beatles, they were a great band. That would be a really cool thing for me to hear from an audience member.

Rain was a tribute band long before we had the opportunity to turn it into a production show, a theatrical Broadway-style show. Back in those days, when Rain was making a name for themselves, they became known as being the band that could play any Beatles song at the drop of a hat. You called it out from the audience, they would play it. No matter how obscure, no matter how off-the-wall, no matter how complicated, they could play it.

We don’t have an opportunity to do that quite so much anymore, because of the intricacies of our show, we have to stick to a certain setlist.

But hopefully we’ve sprinkled enough of your album cuts into our show that people see, kind of, reflect on Rain’s history I guess. In sound checks or one-off shows where we’re not doing the full production, we’ll riff on any Beatles song. The more obscure the better.

Do you have a favorite lesser-known Beatles song to play live?

Right now we’re doing one of the album cuts from “A Hard Day’s Night” called “You Can’t Do That,” and that one’s a pretty cool song to sing. That’s a fun one. And it’s one of the rare times where John plays the lead guitar solo too, so I get to go out in front and play some lead guitar.

Is there another group – from any era – that you would be in a cover band for?

If I could be in another cover band, see here’s the problem: at least in America, they’re way too obscure. There was an ‘80s/’90s band from Australia/New Zealand called Crowded House. Their biggest hit was called “Don’t Dream It’s Over.”

But unfortunately they’re relatively unknown in America. So I don’t know how successful my cover band would be.

Well, maybe a Monkees cover band. I would probably make a fairly passable Mike Nesmith in a Monkees band. That would be fun. But being able to find somebody who could sing with the range of Mickey Dolenz, that would be the tough part.

Rain will play the KettleHouse Amphitheater on Tuesday, June 18.

Tickets and more info can be found at logjampresents.com.

Here's a quick guide to some of the shows happening in Missoula from Friday, Feb. 14-Thursday, Feb. 18.

Here's a guide to some of the shows coming up in Missoula this week.

Rain performs as the 1964 Beatles with Aaron Chiazza as Ringo, Paul Curatolo as Paul, Alastar McNeil as George and Steve Landes as John.