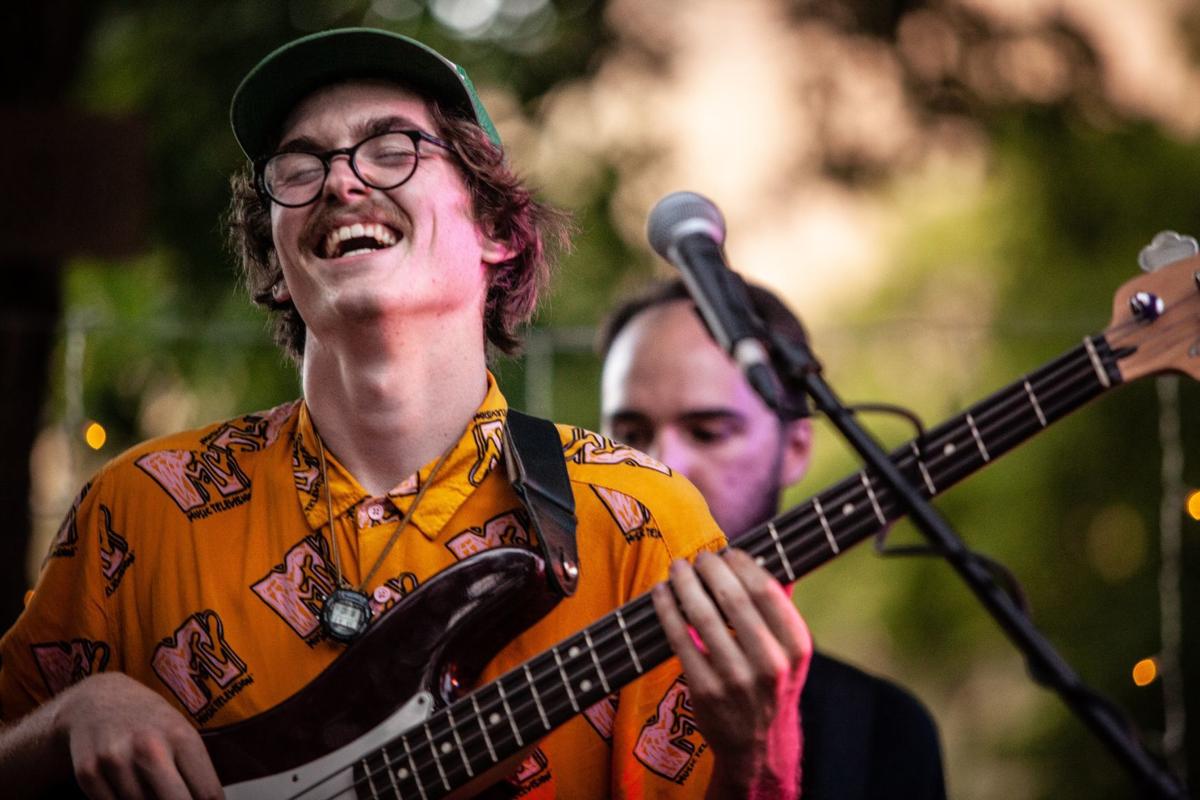 The Fertile Crescent lead singer and frontman Kyle Curtis smiles while playing a show in a Missoula backyard in August. Curtis leads the all-student soul-rock group and writes all of the music for the band. 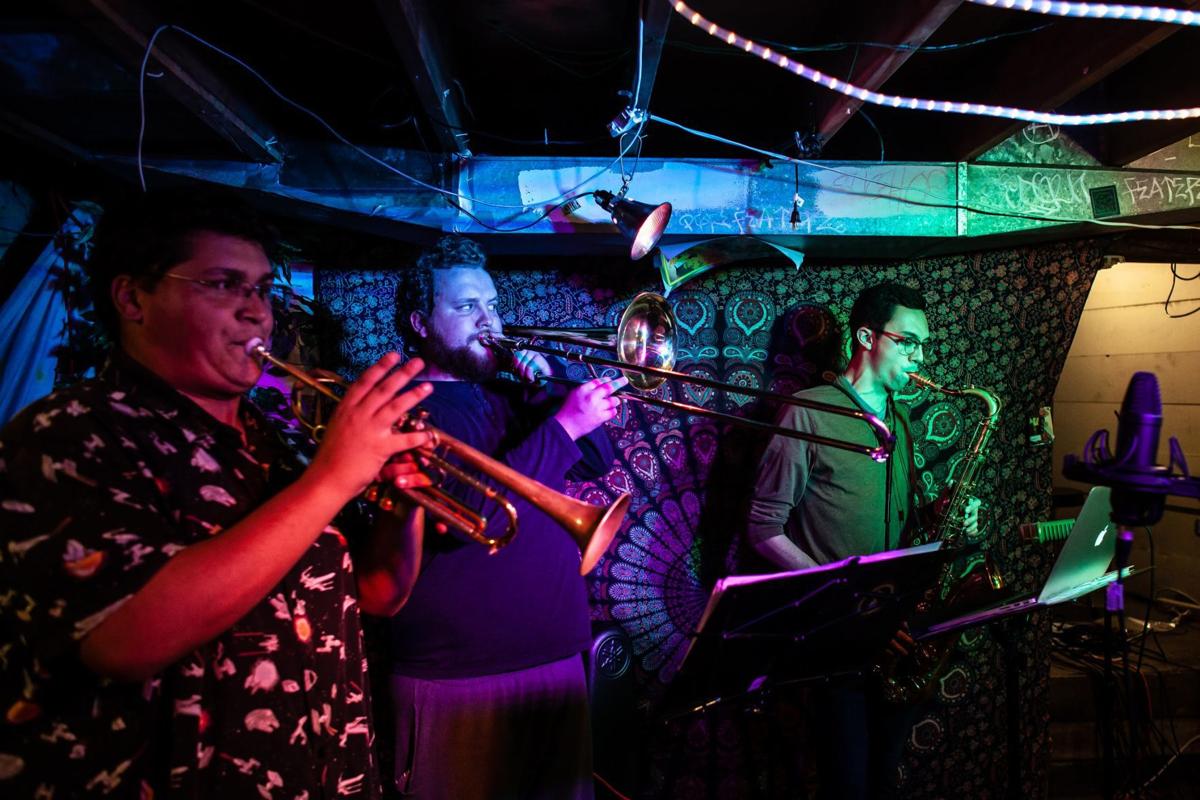 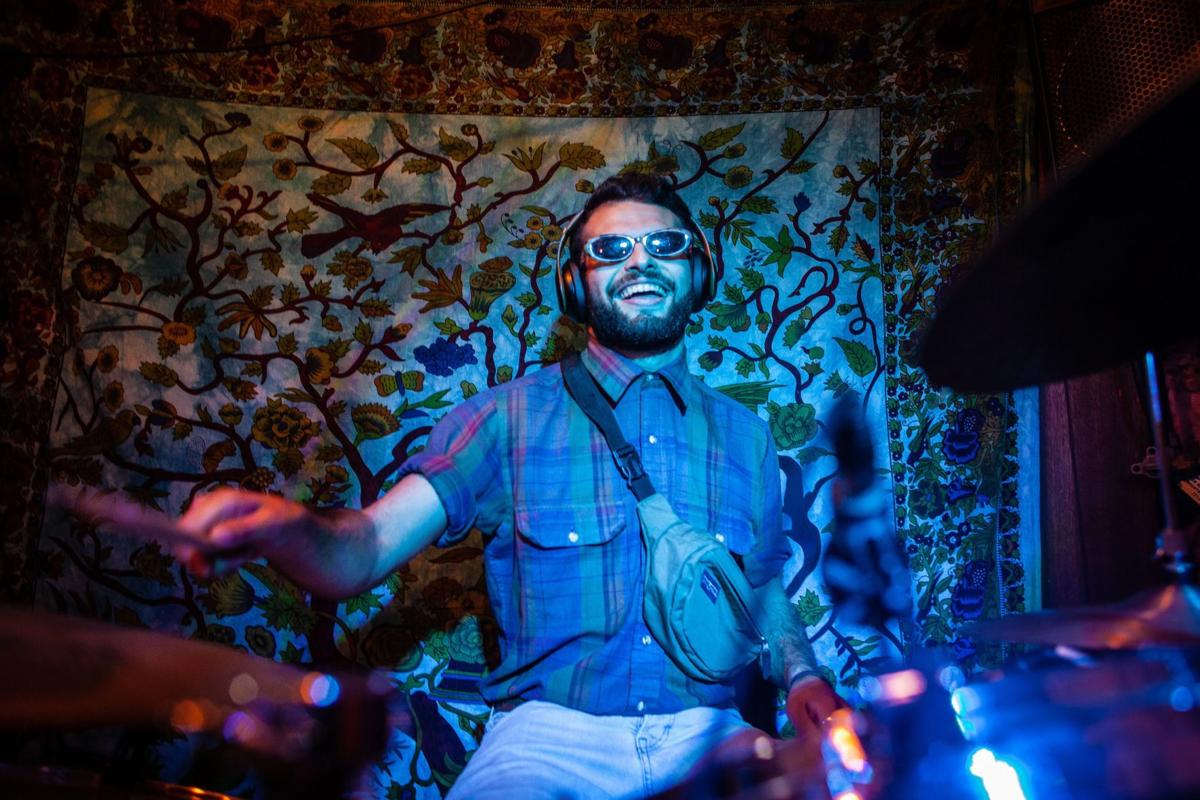 The Fertile Crescent drummer Zach Meyer smiles across the basement at the band during a recording session on Oct. 11. Meyer is a member of the Grizzly Marching Band Drum Line and drums for the Pep Band in addition playing in The Fertile Crescent.

With a big band energy, jazzy undertones and the sound of soul, a group of University of Montana students is bringing young and old to the dance floor playing what they like to call “the people's music.”

The Fertile Crescent, an eight-member local soul-rock band, is celebrating the release of their debut single “Onion Garden” with a free show at the Top Hat on Friday.

The group formed in spring 2018 and has since gone from backyards and basements to shows at Free Cycles, Zootown Brew, the Union Ballroom and the old Zootown Arts Community Center.

“And not to brag, but we have played the Food Zoo,” said frontman Kyle Curtis, who also plays the bass, sings lead vocals and writes all of the band’s music. The group of college students hopes to break into the local music scene and beyond with their show at the Top Hat, which will be their biggest venue to date.

“It doesn’t matter who walks through the door at our show. I like to think that no matter who you are, you’re going to have a good time and enjoy the music,” Curtis said.

The group has a modern vibe, but is heavily influenced by music from the '60s and '70s, he said, adding their sound has attracted a wide range of listeners.

“I feel like what we’re doing, it can be liked by anyone and we don’t really have one group of people that will listen to our music,” said drummer Zach Meyer. The outfit also includes Connor Racicot on keys, Cameron Kinney on guitar, Rosie Cerquone on percussion, Andrew Kagerer on trumpet, Ross Strauser on tenor sax and James Standish on trombone.

The group sees their style — dance music played with live instruments, and lots of them — making a resurgence in the wake of electronic music’s rise in popularity over the last decade.

“I think after the big wave of synthesizers and electronic music, people started to go back to, ‘Oh, it’s cool to have actual people on stage instead of just pressing a button on a computer,’” Curtis said.

Meyer said while most people at their shows are dancing, he’s noticed some in the audience just watching, trying to keep up with everything happening on stage.

“It’s a lot to take in. There’s seven or eight of us,” he said. “A lot of times it’s their first time seeing horns playing music.”

For some members, the band has become a creative outlet outside of their university music groups, where they’re often given sheet music to play and are told how to play it. Curtis said the band’s highly skilled members allow him to write music that will appeal to a musically trained ear, but that anyone can dance to.

“I’ll just kind of randomly have something pop into my head, mostly at a really inconvenient time,” he said, showing a selfie-style cellphone video he took of himself humming a melody while driving. “Most of the time it’s a horn line.”

Curtis then sits down at his piano or picks up his acoustic guitar and takes the 10-second clip and turns it into a song — or at least, that’s how it’s supposed to go.

“When I have a convenient moment, I’ll pick it out and most of the time it doesn’t work,” he said. “I probably have 50 of those videos and only maybe like eight of them eventually turn into full songs.”

Curtis brings the draft of the song to the band to get everyone on the same page.

“He notates out everything on sheet music,” Meyer said, adding that while all the individual parts are written, the song can change a lot during rehearsals.

The band’s debut single “Onion Garden” has a “feel-good” vibe, with the horns driving much of the melody along with Curtis’ vocals, surprise rhythm section breaks, island-y guitar riffs and some funky keys toward the end.

That feel-good vibe is something the band is pushing not only through their music, but through their actions. Meyer said they want their shows to feel safe, adding they’re not afraid to call out audience members for poor concert behavior. And as the band’s audience grows from mainly college students to the wider local community, they want everyone to feel welcome and comfortable.

“I want all types of people and everyone to have a good time,” Curtis said. “I try to really back that up by saying, ‘Hey, dance your little legs off, but be safe and make sure you respect the people around you.’”

A full album is expected to drop by late spring or early summer, but Meyer and Curtis said that all depends on how “Onion Garden” is received.

When asked about his hopes for the future of The Fertile Crescent, band leader Curtis said “unlimited ambition.”

“It’s been my dream since like seventh grade to go on tour with a band, which if we make the right moves, that could happen,” he said.

For now, they’re happy their music is bringing people together and keeping both college kids and the local community in their dancing shoes.

“It doesn’t matter who walks in the door, who you are when you walk in the door, because once the music is playing, everyone is there for one reason,” Curtis said.

The Fertile Crescent takes the stage at the Top Hat on Friday, Jan. 24, with waltz art rock band Writ Large and rap-duo Cleaning Crew opening. The free, 18 and up show starts at 10:15 p.m.

Set for Jan. 23-Feb. 3, the play tells a story of love, triumph and finding ourselves to a backdrop of big belly laughs and fun, said director Rosie Seitz Ayers.

In 'The Blaze,' a Missoula native contemplates the nature of memory, hometown

Matthew Rose is in the midst of a firefight in Iraq at the outset of "The Blaze," the second novel by Missoula writer Chad Dundas.

A 2,000-year-old, half-space god rapper, a character named Justin Beeverz, a purple-horned demon called Steve and DJ Ashton Kutcher are set to take the stage at the Zootown Arts Community Center for the production of “A Night with Rusty Cleaverz (and Friends).”

On Friday, they Radius Gallery will reopen in a brand-new, two-story building right on Higgins Avenue next to the Merc hotel, giving their roster of local and regional artists an even more prominent showcase.

The departed poet Carl Sandburg, a fan of jazz, folk and rock music, will have his words set to spontaneous music this weekend in downtown Missoula.

The Fertile Crescent lead singer and frontman Kyle Curtis smiles while playing a show in a Missoula backyard in August. Curtis leads the all-student soul-rock group and writes all of the music for the band.

The Fertile Crescent drummer Zach Meyer smiles across the basement at the band during a recording session on Oct. 11. Meyer is a member of the Grizzly Marching Band Drum Line and drums for the Pep Band in addition playing in The Fertile Crescent.