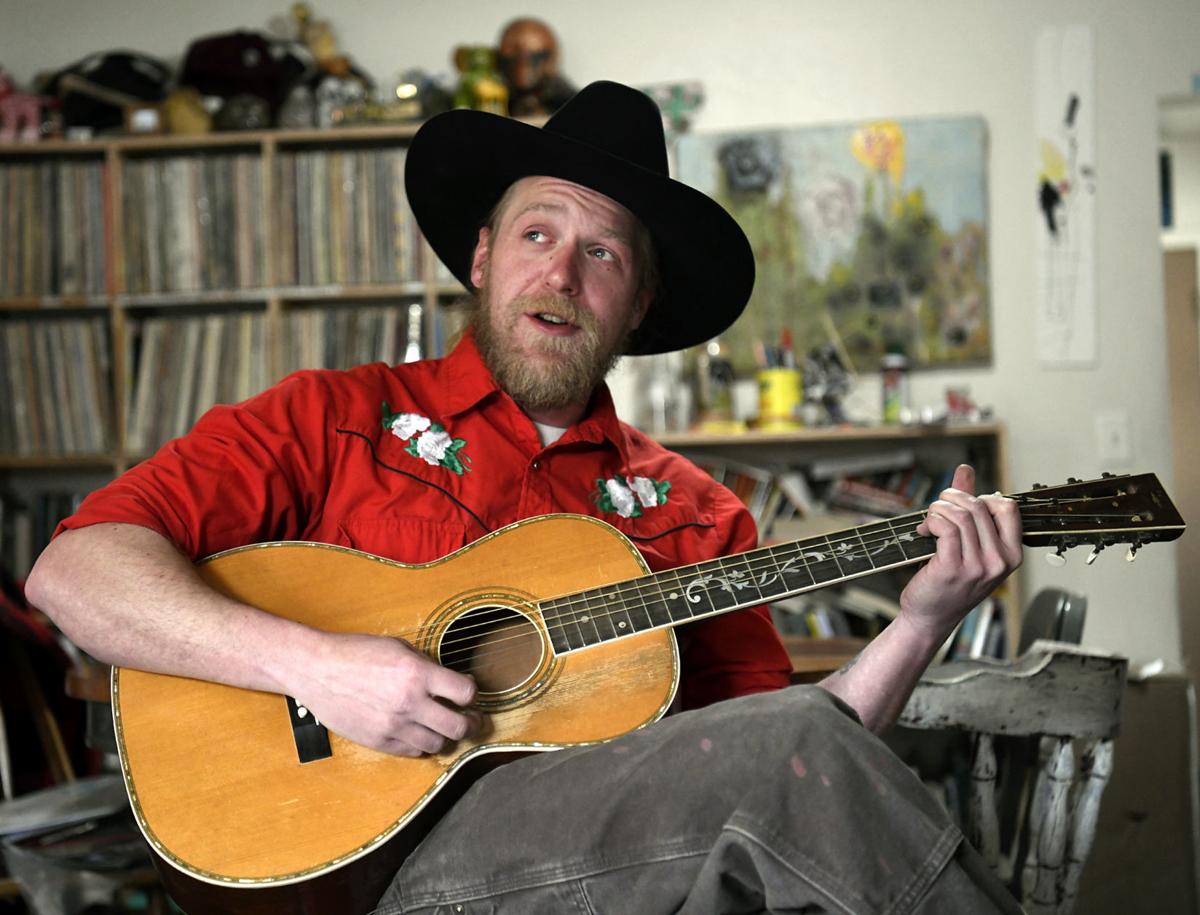 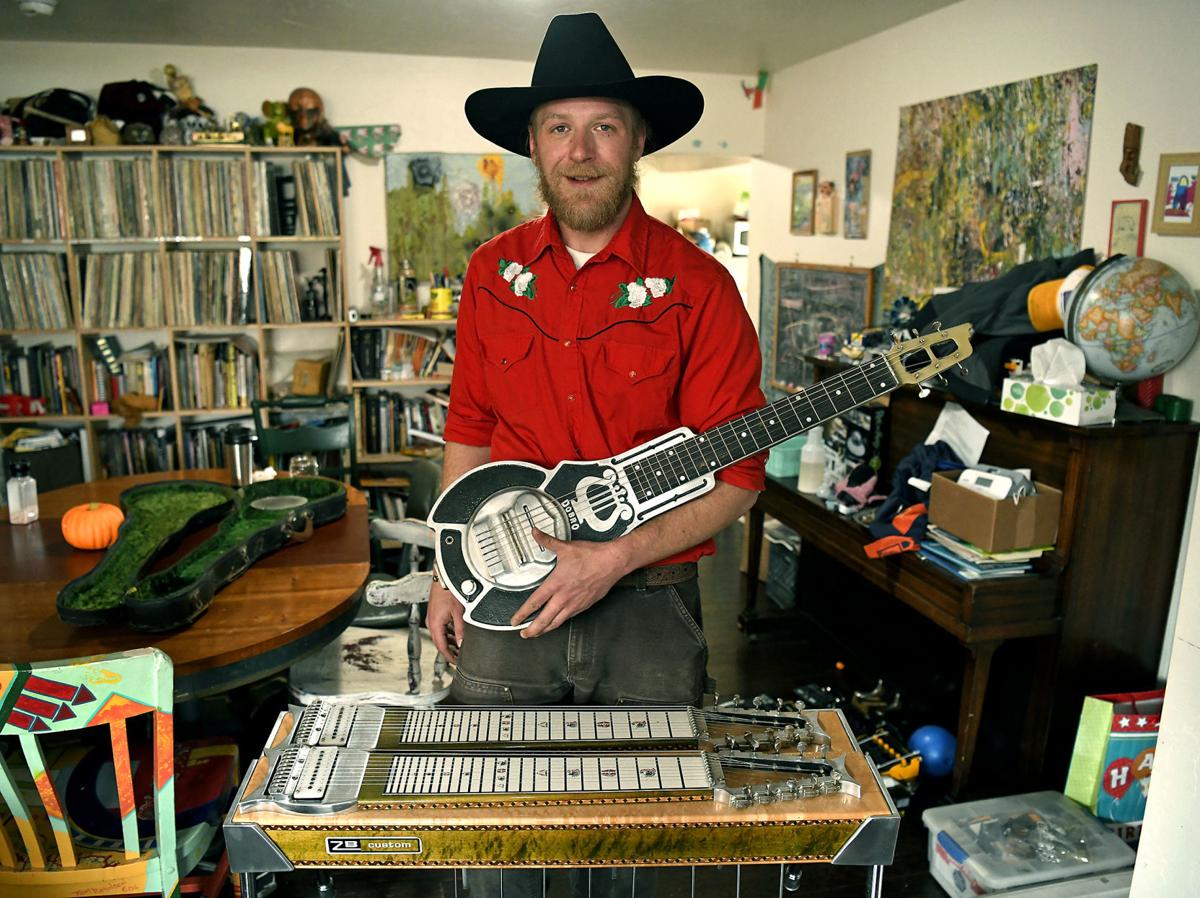 Wailing Aaron Jennings, Missoula’s resident old-time singing cowboy, knows what the people want. He’d hauled out his guitar, put his felt hat on and propped one knee up on a kitchen chair to perform in his dining room.

“You want to hear some yodeling?” Jennings asked with a grin. He launched into “Missoula Valley Yodel,” a bouncy tune written during his walks to work across the Higgins Avenue Bridge, practicing yodeling as he walked.

On Jennings’ new self-titled record, out March 30, he’s accompanied by Grace Decker on fiddle, John Rosett on mandolin and Travis Yost on bass and drums. But last week, alone in his living room, Jennings gave the song its all, earning his “Wailing” moniker in every performance.

Jennings has been playing music for around 14 years, starting out in punk bands and working as a sound technician across the state. His interest in country music, however, came from his great-grandfather Jim Jennings, who wrote poetry and music in the 1920s, traveling around the West to play at dude ranches and radio stations.

“I came across a book written by my great-grandfather, who was a singing cowboy,” Jennings said. “I wanted to do a tribute to him, and in one of his songs it said, ‘Yodel here.’

“I tried it and it was hard and frustrating.”

But his interest in old-time country grew deeper and deeper, with Jennings collecting records from singers like Jimmie Rodgers, Marty Robbins and Hank Williams.

“I just found old yodeling music and listen to it over and over,” he said, remembering how his early-morning Higgins bridge practices would be affected by other pedestrians.

“I’d just slowly get quieter as they got closer,” he laughed.

His wife, artist Katie Ludwick aka ladypajama, knew exactly when he was on his way home through his yodel. Jennings said it took about seven years of practice for him to “feel comfortable” yodeling.

Through these years Jennings collected period instruments like 1930s pedal steel guitars and tracked down information on his great-grandfather’s guitar, which he still has and plays (it’s from Chicago and dates from 1915-1925. And still sounds great).

“He apparently bought this in a pawnshop in Utah in 1927,” Jennings said, eyeing the century-old, small-bodied acoustic guitar.

The instruments, paired with Jim Jennings’ “Shadow of the Tumbleweed,” the collection of songs and poetry, informed the younger Jennings’ learning. He started by playing Jennings’ tunes, before writing his own.

“Wild Roses” is a classic teary-eyed tune about his grandfather’s lost love, all memories of meeting on horseback and lonesome prairies.

“In the book, all it had were the lyrics and tempo, like ‘Foxtrot,’ ” Jennings said. “It’s taken me a while to learn to write in that traditional form without feeling that I’m ripping them off.”

He recorded “Wailing Aaron Jennings” in a fairly traditional style, however, playing live with his small backing band to get out of his own head, a method that tracks with Jennings’ love for live performances.

He’s a frequent guest in Hot Springs, Montana, recently playing four shows in less than 24 hours during St. Patrick’s Day weekend. He has a long list of potential bandmates who are selected based on availability, sometimes creating groups who have never played together before.

There are standard forms for country styles, similar to the blues, where knowledgeable musicians have no problem playing together on the fly. This creates an energy that Jennings loves, where everyone has to collaborate and be at their best during a gig.

So when Yost, who recorded the album at his Year of the Kangaroo studios, suggested recording live, Jennings was all for it.

“Recording for myself sends me into a spiral of over-analyzation,” he said. Recording live is “not as highly polished and it’s not supposed to be.”

This reflects some of Jennings’ favorite cowboys singers: he cites Jimmie Rodgers as his “yodeling mentor,” and the entire top row of Jennings’ large shelf of vinyl records is dedicated to country music, sorted and labeled into categories like “Hanks,” “Outlaws,” “Steel” and “Trucks.”

Jennings admits it’s an obsession, calling his muses the “hillbilly singers and guitar slingers from the '20s to '60s.”

“There’s so much of it that’s so eminently relatable,” he said of the style. “There’s a lot of universal appeal in these songs.

“I’m trying to find a way to bring those traditions into my life.”

Wailing Aaron Jennings will play Monk's Bar Saturday, March 30, with Thee Infernals and Rotgut Whines. Doors are at 8 and the show starts at 8:30. Cover is $5, 21 and up only.

His album, "Wailing Aaron Jennings," will be available at the show or through Bandcamp  starting March 30.