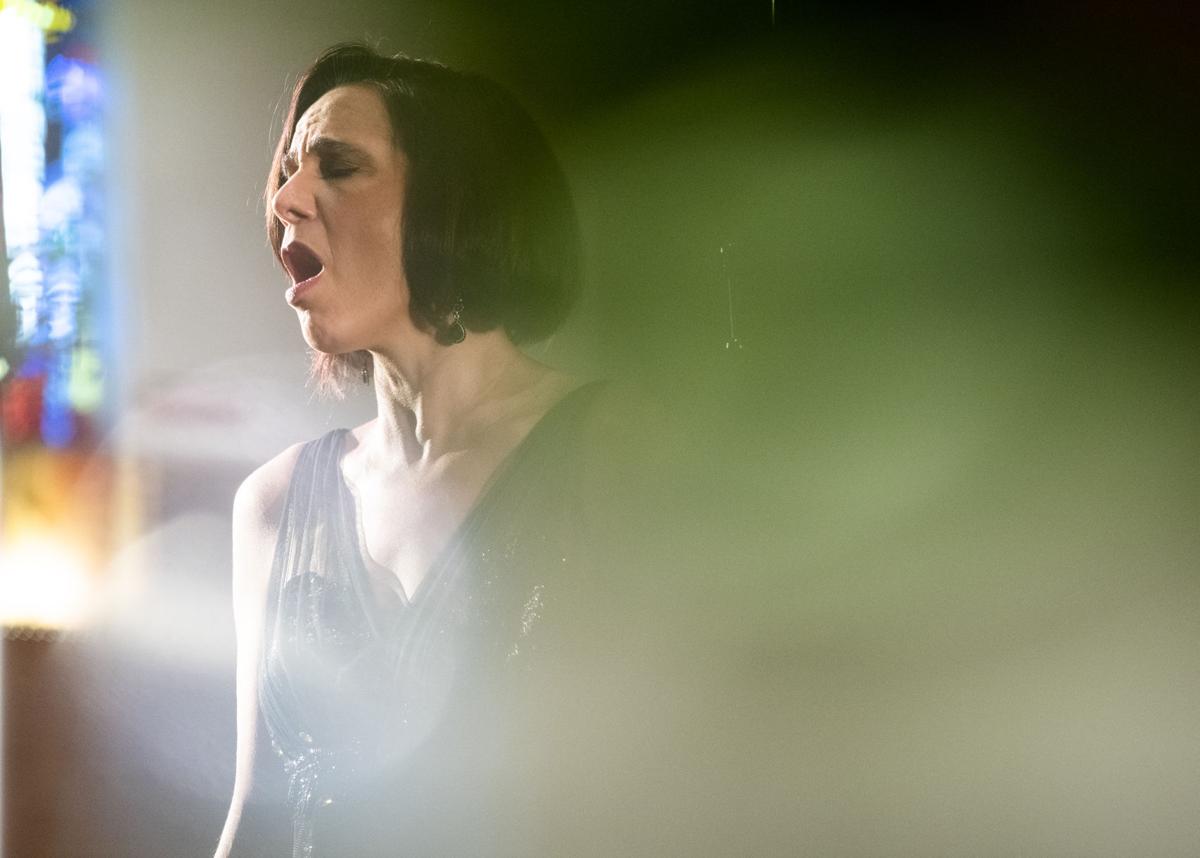 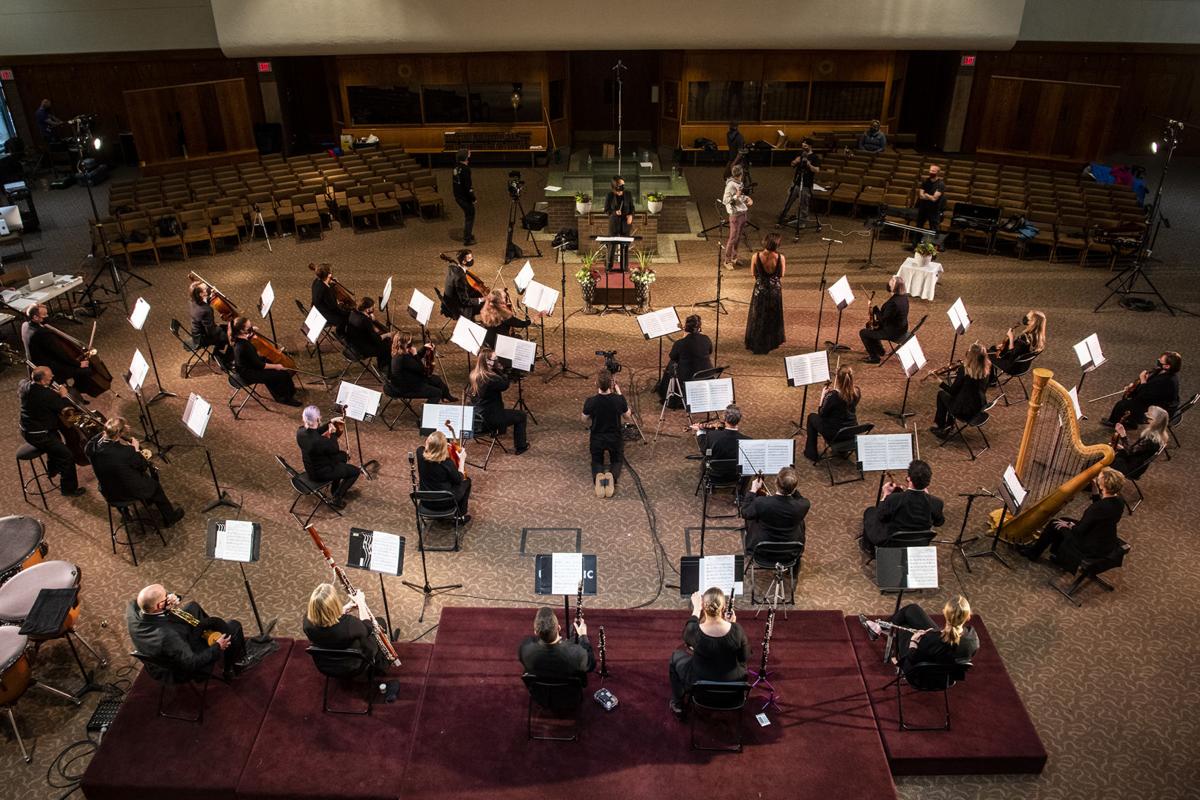 The Missoula Symphony Orchestra rehearses at St. Anthony Parish earlier this month. This concert allowed them to have the most performers yet in their ensemble during the pandemic. 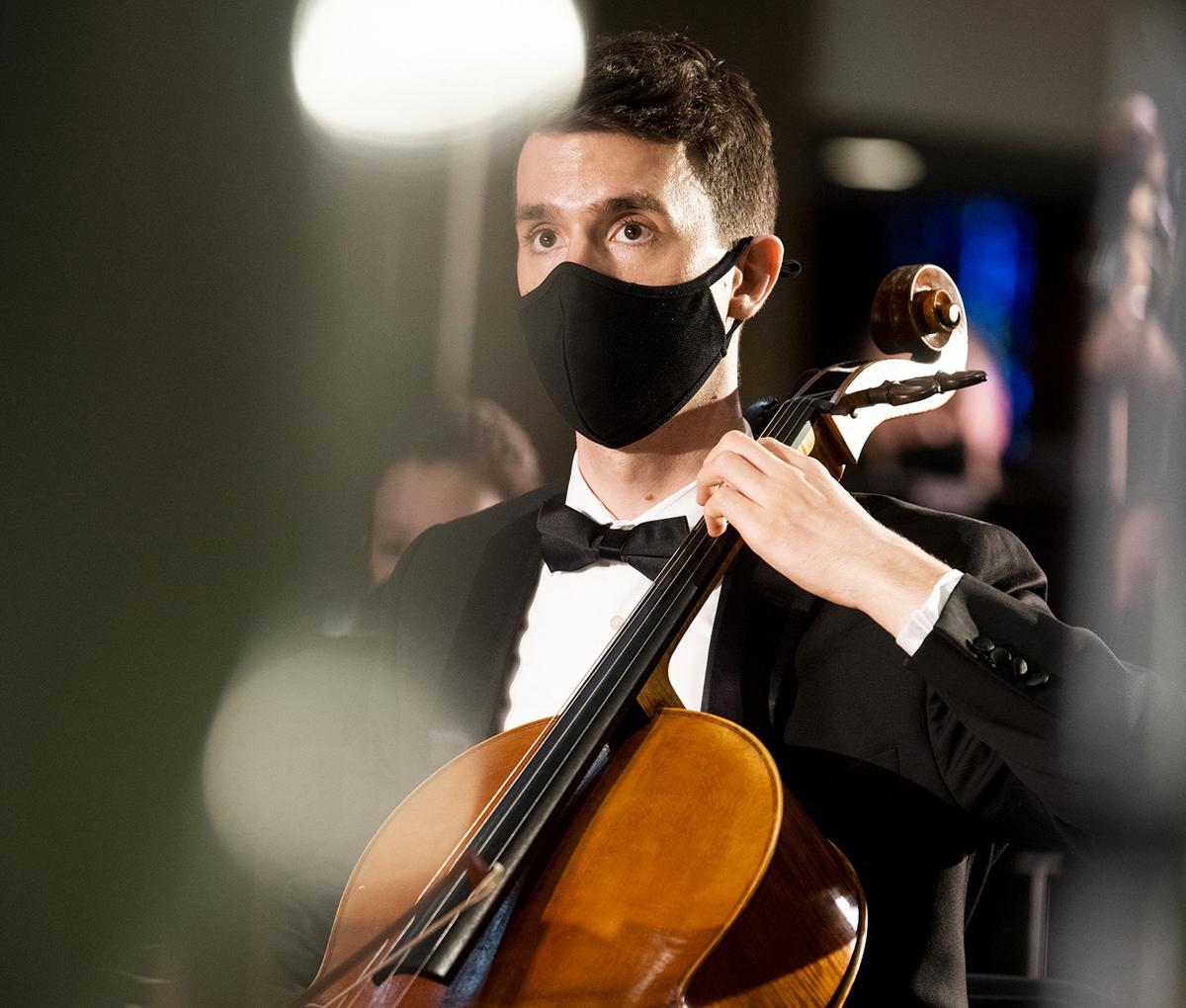 Julia Tai is ending her first season as music director of the Missoula Symphony Orchestra with its biggest concert of the pandemic.

“We have 35 musicians involved,” she said, enough for a “small, symphony-sized orchestra" after a winter of trimmed-down chamber ensembles.

The streamed Masterworks concert, “We Shall Overcome,” was recorded in St. Anthony Parish earlier this month, where they removed the pews and created enough room for all those players.

Tai selected a program that reflects themes of solitude, reflection, mourning and overcoming. It’s diverse in time periods and composers — British-born Anna Clyne wrote her string ensemble piece, “Within Her Arms,” in 2008 after the death of her mother. From the Romantic period, you have Gustav Mahler’s four songs for mezzo soprano and string ensemble. And from the Classical period, Joseph Bologne (also known as Chevalier de Saint-Georges), who was born to a Frenchman and an African mother and built a respected musical career before his work fell into obscurity after the French Revolution.

The MSO Chorale will make a video appearance for “We Shall Overcome,” which they recorded remotely. They’ll appear on projection accompanied by a sophomore tenor from the University of Montana.

“It's a beautiful message not just to show solidarity with everything that's happened in our country this last year,” she said, but also a sentiment that reflects organization and community that is working through “all the difficulties and coming out strong.”

The church has nice natural acoustics that weren’t overwhelmed by the sound of full orchestra with 70-some pieces, Tai said. That quality lends itself well to Clyne’s piece, arranged for 13 strings, which Tai said has a folk-like melody that’s staggered among the players.

“It worked out beautifully in the church because everything's really blended together. You could hear every voice but then every thing also blended into the ensemble,” Tai said.

Clyne has served as a composer in residence at the Chicago Symphony and been nominated for Grammy Awards. While the piece is contemporary, and Clyne often uses electronic techniques, she “always has something to say,” Tai said, and “she wants to connect.” To Tai, it doesn’t sound cold or theory-based, but “really just music that pours out of her.”

In this case, Clyne’s mourning is “also an experience that a lot of us have gone through in the past year,” such as “grieving the loss and mourning our families.”

Tai said O’Connor, a colleague from undergraduate days, has a silky, silvery tone to her voice that “brings brilliance and intimate feeling” to the songs, many of which have biographical undercurrents for Mahler. He wrote one as a gift for his wife, Alma, and others about the solitude of his life as a composer. Originally for voice and piano, he arranged them for orchestra.

“With the reduced orchestra, I feel like we got the color that he wanted from different wind or string instruments, but at the same time, it's even more transparent and intimate, so it's perfect,” she said. Mahler often used these more personal songs in later symphonies where they became “bigger than life and grandiose.”

While not widely known, Bologne was a Renaissance man who has only recently been celebrated by more frequent orchestral performances of his music. He was a champion fencer, violin virtuoso, composer, conductor and contemporary of Mozart.

He was born to a French landowner father and African slave mother in the Caribbean, and raised and educated in France from age 7. As a teenager, he was a champion fencer who earned his title, Chevalier de Saint-Georges. He cultivated a reputation as a master violinist, and composers dedicated music to him and he later conducted an orchestra in Paris.

Despite his skill and talent, he was denied the job as director of the opera in Paris because of his race. After he fought during the Revolutionary War, his career in music never recovered, and he died unknown and fell into obscurity, Tai said.

In the past decade, ensembles have begun playing his operas, string quartets, symphonies and his violin concerto.

“They’re just really wonderful, beautiful music,” Tai said, and she sees his Symphony No. 1 as typical of the Classical period — upbeat, happy, exuberant. The second movement features a “beautiful” aria, and he “understands the instruments and how to make them shine and how to make them sing.”

That tone seemed like the right way to conclude the season as the instrumentalists were able to gather in larger numbers than ever.

Recording and looking ahead

The previous concerts were recorded with Montana PBS. This time the MSO reached out to Noise Gate Studios, a Missoula video production company.

Earlier in the pandemic, Noise Gate’s Adam Winger teamed up with Matt Olson of Attack and Release Sound to record full-concert performances of local bands, to give performers and viewers an outlet during the venue shutdown.

For the MSO recording, Winger said they brought in six cameras and a handful of GoPros they spread out within the audience to capture smaller moments from the musicians.

Noise Gate used lighting and different shooting techniques, so it’s different “in terms of style and the way they shoot,” and they were “really fun” to work with,” Tai said.

Besides the MSO Chorale appearance, there are two brass fanfares to bookend the concert, sending it out like “a big party.”

Besides closing out the 2020-21 season, the concerts mark a transition point. The next performance is the free outdoor Symphony in the Park. They’re finalizing a new location, which won’t be Caras Park, as they wanted to have more space for social distancing. The concept will be the same though — you’ll hear Gershwin alongside themes from “Jurassic Park” and some Guns ’n Roses.

For the 2021-22 season, they’ve selected programs and dates for in-person concerts at the Dennison Theatre. Tai said they’ll learn soon about any capacity limitations, and if there are any, they might consider doing more than their traditional two concerts or if they might film the concerts.

She’s proud and grateful the symphony here designed a season, when many around the country paused their programming.

“There are a lot of different surprises and obstacles that came our way — every concert there’s a different problem we have to solve,” she said. While it’s “not been a smooth ride,” the staff, board and orchestra were “able to produce those concerts, and it is really just wonderful.”

The Missoula Symphony Orchestra is presenting its final concert of the year in June.

It will stream online on these dates and times:

To buy tickets, go to missoulasymphony.org.

- Anna Clyne: Within Her Arms

Ever wonder how the Queen makes her money?

Ever wonder how the Queen makes her money?

Montana Bookshelf: Fiction, nonfiction and poetry for May

The Missoula Symphony Orchestra rehearses at St. Anthony Parish earlier this month. This concert allowed them to have the most performers yet in their ensemble during the pandemic.