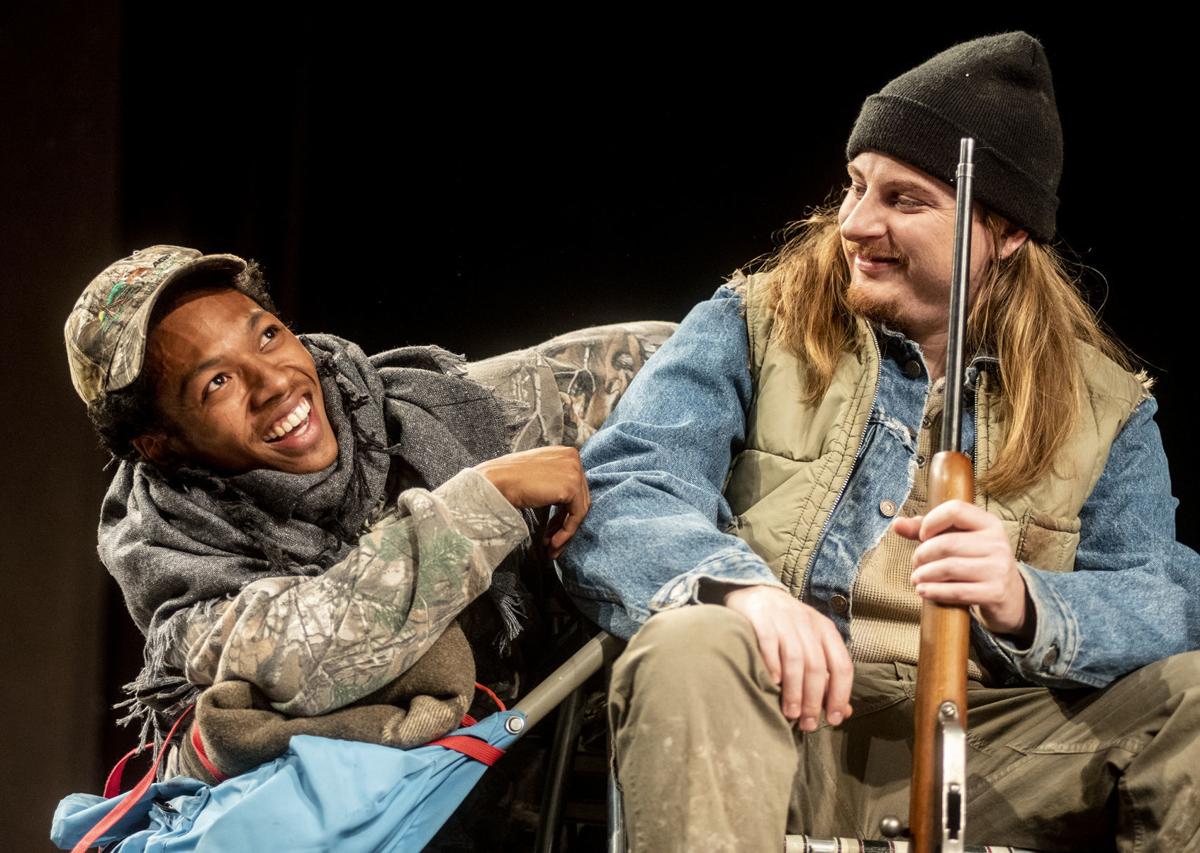 Elijah Fisher, left, and Sugar Bush, cast members in "Mr. Burns, A Post-Electric Play," rehearse in the Montana Theatre on Monday evening. The University of Montana School of Theatre and Dance production will run from Oct. 9-13 and 16-20. 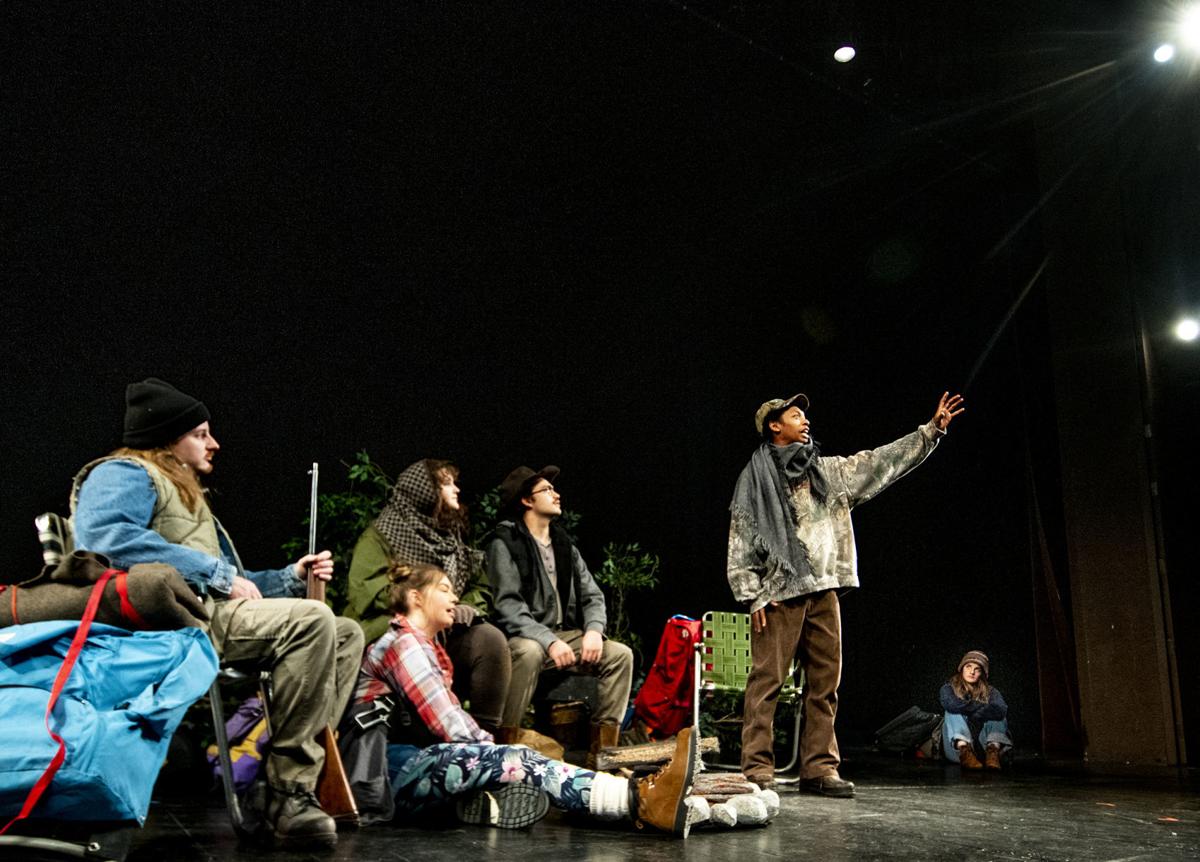 From left: Sugar Bush, Claire Peterson, Kendall Seibel, Antonio Armagno, Elijah Fisher, and Aimee Paxton go through a scene of "Mr. Burns, a Post-Electric Play" at Montana Theatre. The play spans over an 80-year period in a post-apocalyptic future in which a group of strangers forms a theater troupe. 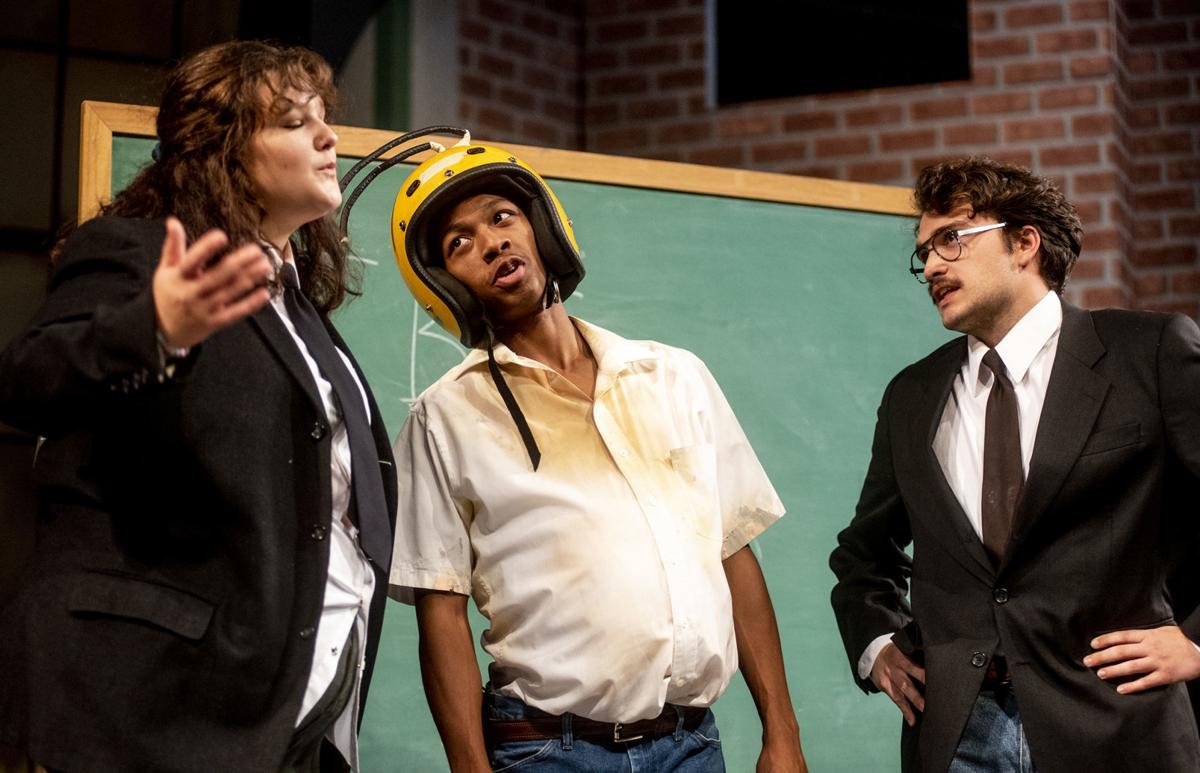 From left: Kendall Seibel, Elijah Fisher, and Antonio Armagno run through scenes in a dress rehearsal at Montana Theatre on Monday evening.

Elijah Fisher, left, and Sugar Bush, cast members in "Mr. Burns, A Post-Electric Play," rehearse in the Montana Theatre on Monday evening. The University of Montana School of Theatre and Dance production will run from Oct. 9-13 and 16-20.

From left: Sugar Bush, Claire Peterson, Kendall Seibel, Antonio Armagno, Elijah Fisher, and Aimee Paxton go through a scene of "Mr. Burns, a Post-Electric Play" at Montana Theatre. The play spans over an 80-year period in a post-apocalyptic future in which a group of strangers forms a theater troupe.

From left: Kendall Seibel, Elijah Fisher, and Antonio Armagno run through scenes in a dress rehearsal at Montana Theatre on Monday evening.

Suppose that society has collapsed. A group of survivors has gathered in the woods.

What shared stories would they tell themselves? In "Mr. Burns, a Post-Electric Play," nationally recognized writer Anne Washburn imagines that it could very well be an episode of "The Simpsons."

Life without a power grid doesn't discourage this sort of thing in her post-apocalypse scenario, which is an homage to stories and "how much humans need story as a means of connecting in society," according to Jadd Davis, a University of Montana graduate student.

Davis, who's directing the School of Theatre and Dance production opening next week, said it's written for hard-core Simpsons fans and newbies alike.

"If you know that episode, you're going to love it based on the familiarity aspect of it, but if you don't know it, the play script itself provides so much context that you don't need to know 'The Simpsons,' " Davis said.

In the first act, the survivors need a distraction from their plight. They're trying to remember "Cape Feare," an episode-long parody of the thriller movies (there are two). In the "Simpsons" version, the misbehaving young protagonist Bart is the target of death threats from the murderous clown Sideshow Bob, and the family goes into witness protection in a small town.

As they sit around a campfire, Washburn's characters hash out the quotes to try to get them right, which are pulled directly from the show.

It's "'fun around the campfire after the apocalypse,' so there's only so much fun you can have, but it's ... their way of releasing and connecting with each other as they're surviving," Davis said.

Washburn wrote this section in "verbatim theater" style, transcribing the improvisations of a group of actors and then shaping them into a script. It requires the cast of UM students to work in a hyper-realistic style, too. Despite the comedic premise, the characters are immersed in a dangerous scenario, with the threat of warring tribes and a desperate need to connect with a larger group to survive, Davis said.

By Act II, the time frame has shifted ahead seven years. Washburn has envisioned a "capitalistic marketplace based on theater," he said, and " 'Simpsons' re-enactors have become the dominant barter system in the society."

By Act III, we've moved ahead again. This time, 75 years. "'The Simpsons' re-enactments have essentially become a creation myth for this brave new world of society, so it's an entirely different style."

The third act is a through-sung operetta, "essentially a passion play" in which Bart is a savior and the town's antagonist, the power-plant owner Mr. Burns, is the devil, he said.

John Kenneth DeBoer, the interim dean of the College of the Arts and Media, said the selection committee picked "Mr. Burns" for a few reasons. For the 2019-20 season, they wanted to look at more contemporary plays by women, he wrote in an email. Second, it has been popular nationally since its 2012 premiere.

"It addresses contemporary themes that our students care about, which we also wanted to reflect that in the work we produce. It also has musical elements to it which serves our new musical theatre curriculum," he said.

They're producing the play in the Montana Theatre, the main-stage venue on campus. The lighting design has been tricky, Davis said, since there isn't supposed to be any artificial light. They start in the woods, with fake moonlight, then move to a warehouse with windows providing artificial daylight, and end up in what looks like an old church repurposed for "Simpsons" re-enactments.

Davis said that "it's not really a musical, except for it totally is a musical. Act I has no real music to speak of, Act II has some, and Act III has only, almost nothing but."

If you recall the "Cape Feare" episode, it culminates in a confrontation on a house boat. Bart postpones death by requesting that Sideshow Bob perform Gilbert and Sullivan's "HMS Pinafore" operetta in its entirety.

This is the root of the re-enactment in Act III, although with decades, the songs and story have mutated into that strange creation myth.

Washburn includes commentary on attachment to material goods, too, as the characters become unironically and completely nostalgic for things like Diet Coke, he said.

Societal criticism aside, he said it's a dark comedy that doesn't leave anyone with doom-laden feelings.

"While that's the setting and the context, the piece itself has a hopeful trajectory. It's given me a lot of hope working on it, I think especially with how fraught things are in our world today. Like, 'OK, well maybe we could blow it all up and it would grow back, we'll see,'" he said.

The University of Montana School of Theatre and Dance is presenting, "Mr. Burns, a Post-Electric Play," in the Montana Theatre in the PAR/TV Center.

Alison Stigora used to have to burn her own wood for sculptures. As an artist in Pennsylvania, there weren’t wildfires to create naturally cha…