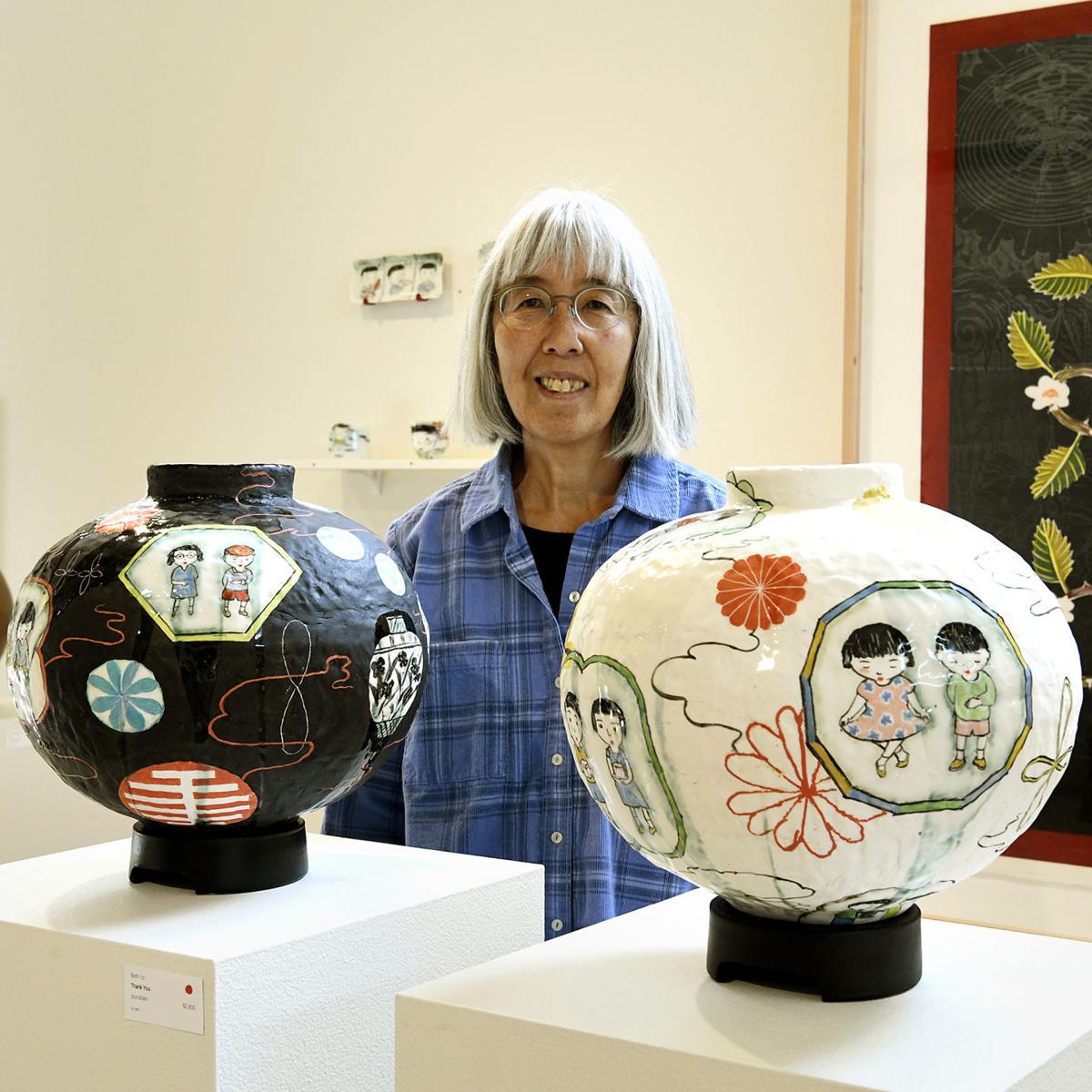 Beth Lo's work at the Radius Gallery was made after her mother passed away earlier this year at age 99. 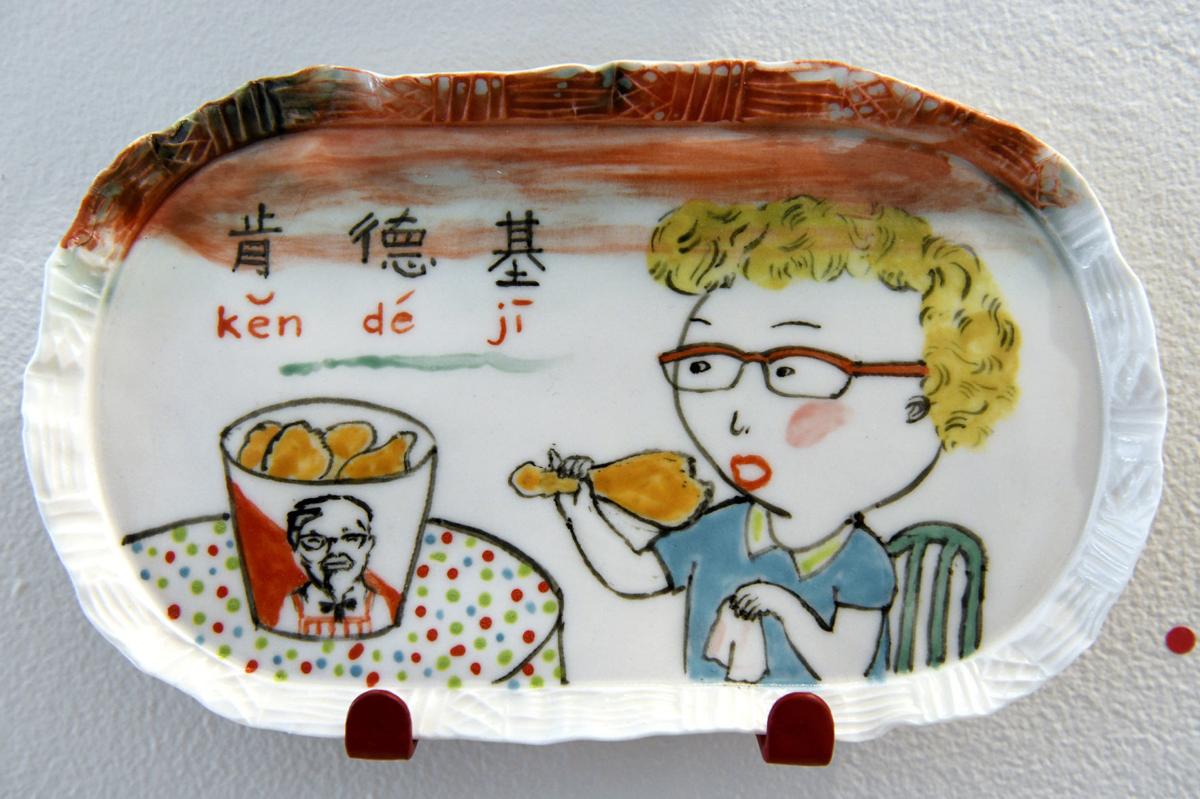 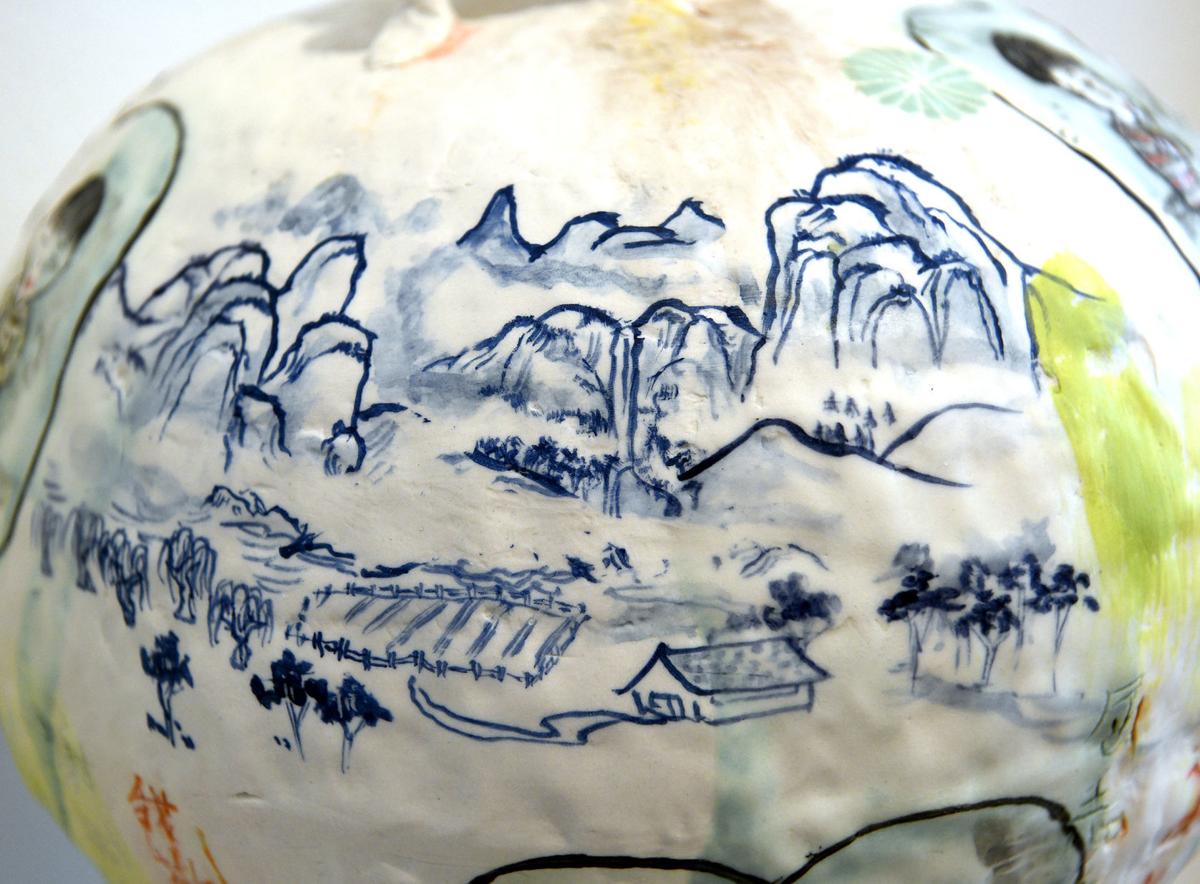 Beth Lo used one of her mother's paintings as the basis of part of one of her porcelain pieces, "After Kiahsuang."

Beth Lo's work at the Radius Gallery was made after her mother passed away earlier this year at age 99.

Beth Lo used one of her mother's paintings as the basis of part of one of her porcelain pieces, "After Kiahsuang."

In May, the ceramic artist Beth Lo's mother passed away two months before she would have turned 100, a birthday and celebration which she had been excitedly anticipating.

Kiahsuang Shen Lo, whose first name is pronounced "josh-when," is the subject of many of the vases Beth Lo, a retired University of Montana art professor and National Endowment for the Arts fellow, has made since.

Two of the porcelain vases, titled "After Kiahsuang," are decorated with imagery and lettering that alludes to Chinese art and ideas of familial respect, along with Beth Lo's own signature imagery of children and streaks and washes of color from her background in non-objective art.

Kiahsuang Lo taught her children traditional calligraphy, which you can see on the surfaces.

"Her dad taught her calligraphy, and she passed it on to us in the same way that she was taught, which was to repeat characters, and she would grade them at the end of every session," Beth said recently in the Radius gallery, which is showing the work this month. One circle meant they were good, two meant they were very good.

Beth said her version of the precise art is meant to look "a little childlike" or naive, like calligraphic graffiti she saw on a trip to China. The sayings include phrases like "thank you," and "I respect you," "respect your elders," or "set a good example."

Beth's drawings of children are present on the vases, too, inviting figures in black line with minimal accents of color.

American ideas of parenting — that the child's success is the focus of the family — was unusual to them.

Beth's father, Hsu Lo, and Kiahsuang immigrated to the United States from China in the 1940s. They grew up with traditions of filial piety and reverence for elders and ancestors.

"They laughingly were complaining that they didn't get their due," Beth said.

After her parents graduated from the University of Michigan, they moved to Lafayette, Indiana, where Hsu taught aeronautical engineering. (Neil Armstrong was a student.) Beth said it wasn't easy for an Asian family to settle there, and she recalls her parents having difficulty finding a place to rent at one time. They attended summer camps for Chinese families, and she met other kids from other towns who became her "cohort."

"My best friends all through grade school and high school were these kids I only saw a few times a year. We kept up these long letter-writing campaigns," she said.

Beth's style is so well-known it's hard to imagine what came before. She said it wasn't until her son, Tai, was born 32 years ago that she started drawing children. Prior to that, her work was purely abstract. (She says you can still see this in her use of layering and color.)

Initially, she started drawing them this way because her time was so limited. Her familiar imagery of kids started as kitchen-table doodles. After decades of honoring her work, she says they're symbols of potential, vulnerability, innocence and play.

"When I had my son, it grounded me in such a way, both into my own heritage and also to a feeling of lineage with parents, and also to understanding, or to just being aware of the world of the child," she said.

Beth also plays in the Big Sky Mud Flaps, a band that does everything from Western swing to jazz and rock, which is a way of reminding you that not all of her work is serious. Elsewhere in the gallery, she's showing small platters of a figure with a broken leg. She recently broken hers while hiking in Oregon, having slipped on a "nothing" spot a steep half-mile from the trailhead.

She's showing noodle bowls that she decorated with paintings of kids eating noodles and bowls with figures preparing  ingredients for cooking. She imagines them like the ready-to-go bowls of ingredients on hand during a cooking show.

The pieces dedicated to her mother have a few more elements that are subtle tributes. She copied the vases' blue-lined landscapes and rural scenes from mother's work.

Kiahsuang picked up traditional Chinese brush painting and became quite serious after she retired and moved to Oregon. Later in her life, she moved to Missoula and would work in the studio with Beth.

Ten Spoon winery used one of her paintings for its Cherry Blossom line, and she sold her cards at Rockin' Rudy's. They also collaborated on pieces — Kiahsuang did the drawing and Beth made the pottery.

Often, Kiahsuang would want to stay in the studio longer than Beth did.

Another set of vases, with memorable use of black and red, are partially based on the idea of inheritance vases. The patterning of objects and lines comes from Ming and Qing dynasty exportware.

"Instead of having things completely symmetrical, you make the feel of a pattern with unlike objects," Beth said. They feel like pattern even though they aren't, really, she said. The idea of painting vases on vases is also traditional, she said. Some of the more abstract-seeming objects she's painted come from Chinese funerary papers. You burn them after someone dies, and whatever symbols are on the papers will accompany them to the next life, she said.

Beth Lo's work is on view at the Radius Gallery as part of an exhibition, "the atoms of our frame," with printmaker John Buck and ceramic artist Josh DeWeese. The show is up through Nov. 2. She'll participate in a gallery art talk with DeWeese on Saturday, Oct. 19, from 3-4 p.m. RSVP at 406-541-7070, the talk will likely be crowded.

Joseph Running Crane found himself back in Browning for the winter some four years ago, for much longer than he had anticipated.