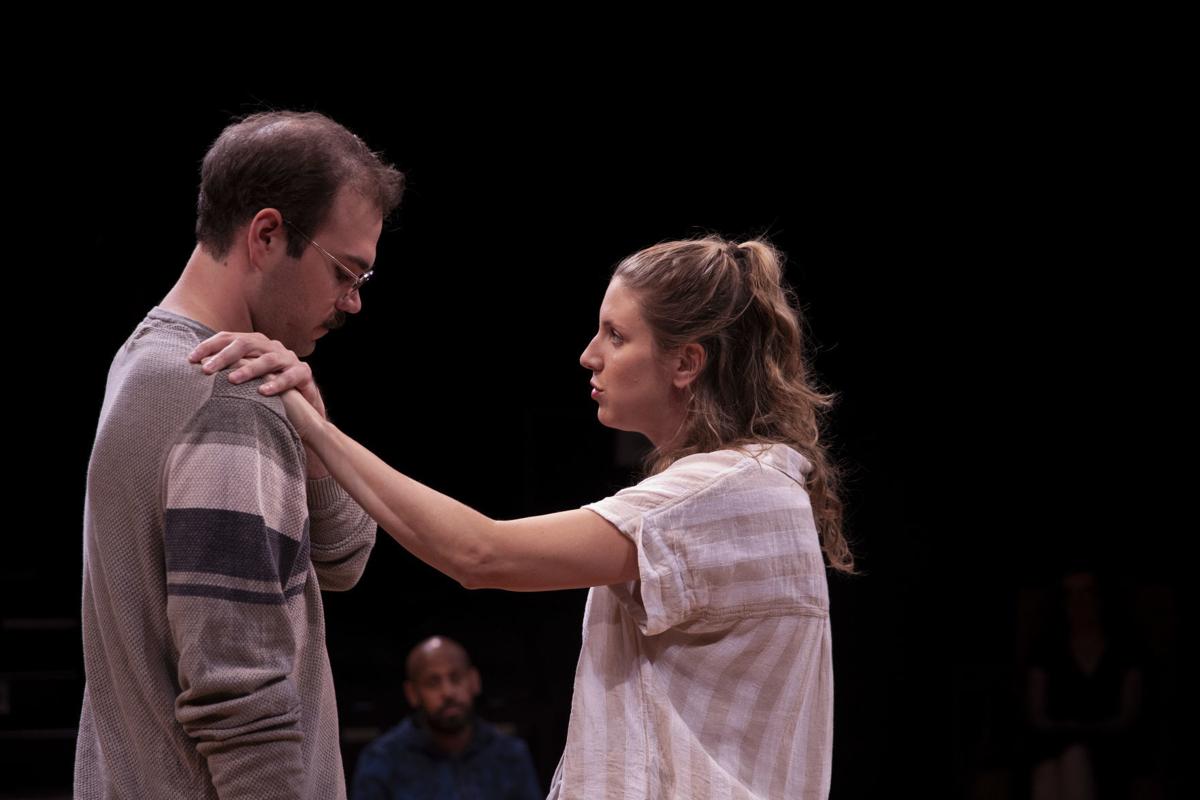 In Emily Feldman's "Go. Please. Go.," Jeremy (Bear Brummel) and Emily (Jenni Putney) break up, but neither can afford to move out. 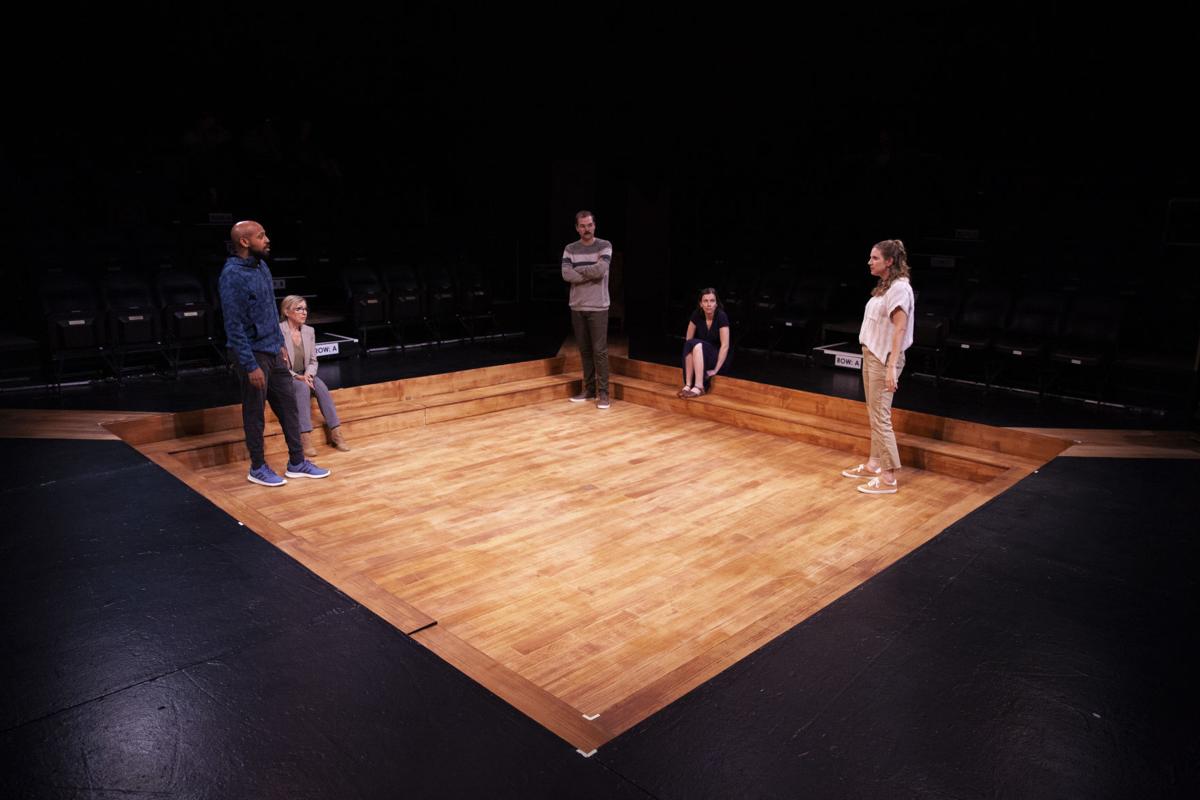 The apartment is represented by a lowered stage in the Masquer Theatre, where friends, family and new partners enter and exit their lives over the course of 65 years.

A new play by Emily Feldman ambitiously condenses a lifetime's worth of relationships — with partners, spouses, friends and family — into a 90-minute, dramatic comedy.

The world premiere production of "Go. Please. Go." at the Montana Repertory Theatre moves through all these decades at a pleasing pace as feelings change and time strides forward more quickly than anyone is ever comfortable with.

The premise is set up quickly and simply: Jeremy and Emily, both 20-somethings, break up at the outset, but quickly learn that neither can afford to move out.

Feldman is a playwright based in New York, and the joke sadly has become easy to transport to other settings, whether Seattle or Missoula. She isn't too far removed from the ages of her characters and the satire feels sympathetic rather than critical.

Jeremy, a teacher and withdrawn, hipster-mustachioed intellectual, is kind and funny but just woke enough to grate on Emily. He corrects her sentences, and objects to things like a free trip to Israel on political grounds. He'll lecture you on the importance of voting, but insists that he doesn't lecture his students. No, he hosts open dialogues. When challenged to a fight, he suggests the style of combat as "preppie casual." Bear Brummel, a New York-based actor, renders Jeremy well, with the overlapping stuffiness and vulnerability required.

Emily, a nurse, is hard-working and caring, but the emotional and physical demands of the oncology wing seem to wear on her. She brings up more than once a "plastic guillotine" hanging over her head like she's in Medieval times. (Those were from the French Revolution, Jeremy says.) Jenni Putney, also of New York, makes the most of her character's exasperation and open spirit.

It turns into an odd couple scenario from the very first scene, when Emily decides they need to break up. Again, that guillotine. Jeremy agrees to "go," the word that triggers every scene change. But he can't pay rent on his own nor can he find roommates who like him. These two are meant to be together, whether as friends or partners, regardless of how awkward it inevitably gets.

One of the pleasures of the structure is that it frees Feldman to quickly move around in time and exit a scene once it's run its course, jump-cutting like an episode of "Arrested Development."

Her dialogue is naturalistic but highly stylized. It's easy to follow even as she works the actors into a rhythm, one sentence or two, back and forth, at the pace of a tennis match. She likes repetition and symmetry, too. Lines or particular set-ups, whether funny or serious, are repeated through the play, shifting in meaning and sometimes used as foreshadowing.

Andrew (Yonaton Gebeyehu, also of New York) is a sort of anti-Jeremy — athletic, uncynical, positive. Instead of limiting him to that initial impression, he develops his own arc from easygoing to complex, success to failure and a (humorous and fitting) comeback.

The cast is rounded out by Kelly Eviston-Quinnett, the head of performance at the University of Idaho; Ann Peacock of Missoula; and Salina Chatlain of the Montana Rep. As ringers, they play variously the lovers, mothers and friends who swirl in and out of the apartment.

Once Emily and Jeremy have broken up but stayed roommates, the play ambitiously begins moving through an entire lifetime of emotional activity: break-ups, fights, reconciliations, new relationships, unexpected friendships, marriage, births, conversions, graduations, divorce, deaths, new starts, reversions to old ways. People enter their lives and leave them, and the steady march of time is as inevitable as her language and structuring is surprising and unpredictable.

Michael Legg, the Montana Repertory Theatre's new artistic director, took the reins for this production in the PAR/TV Center's Masquer, its black-box theater. They chose a bold stage design that barely includes any set at all. All the action unfolds in a lowered square, surrounded by rows of raised seating on all sides for the audience.

While the play feels fast and lean at 90 minutes, it no doubt must feel like a marathon for the main cast, who never really leave the stage and don’t have any props to work against. It’s all dialogue and gesture, but you never wish there were more.

A set of three characters' mothers appear in scenes, sometimes with dance numbers, that feel like the dialogue version of synchronized swimming as lines go and forth between them.

With that many mothers on stage, Feldman weaves in touching scenes about parents aging, such as a thread of seemingly unimportant questions that occur to Emily as her mother gets older. (Those weren't the right questions, she concludes.)

Part of the unique approach the play is that it appears to take place almost entirely in the apartment in scenes that involve at least two of the characters working out or failing to work out parts of their relationships. As the scenes end with someone saying, “I should go,” “you should go,” or whatever variation, Feldman captures the distinct emotional weight such goodbyes have, whether happy or devastating, and the peculiar way you know that a particular span of your life has ended, perhaps permanently, even if the people stay a part of your life.

It’s endlessly relatable, and the humor is accessible to either 20-somethings or parents. As Legg’s first full-length play as head of the Rep, it’s a positive sign of the kind of inclusive and new theater he wants to bring to Missoula.

The Montana Repertory Theatre’s “Go. Please. Go.,” closes out its run this week.

All performances take place in the Masquer Theatre, PAR/TV Center, the University of Montana. Tickets are $20 general or $10 for children 12 and under, available at montanarep.com or griztix.com.

A couple breaks up, but no one moves out: Montana Rep premieres new play

A young couple decides to break up. Then it takes them decades to do it.

The idea of an artist residency sounds straightforward at first. It's a place for an artist to create work without distractions.

In Emily Feldman's "Go. Please. Go.," Jeremy (Bear Brummel) and Emily (Jenni Putney) break up, but neither can afford to move out.

The apartment is represented by a lowered stage in the Masquer Theatre, where friends, family and new partners enter and exit their lives over the course of 65 years.