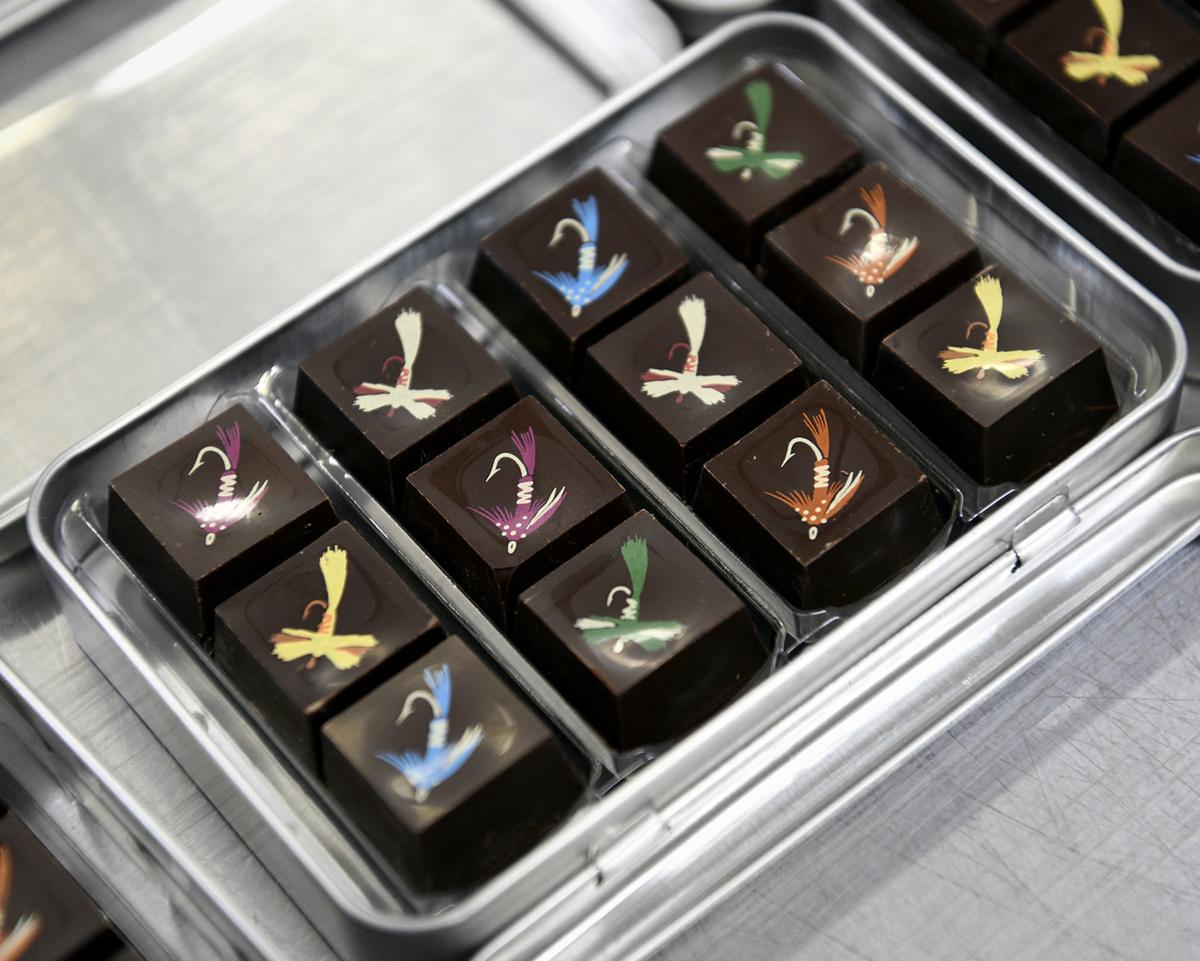 The Montana Fly Box, made by local business Posh Chocolat, features 12 handcrafted chocolates with fishing flies printed on each. Jason Willenbrock, who owns the business with his wife Ana, said the chocolates have been 10 years in the making. 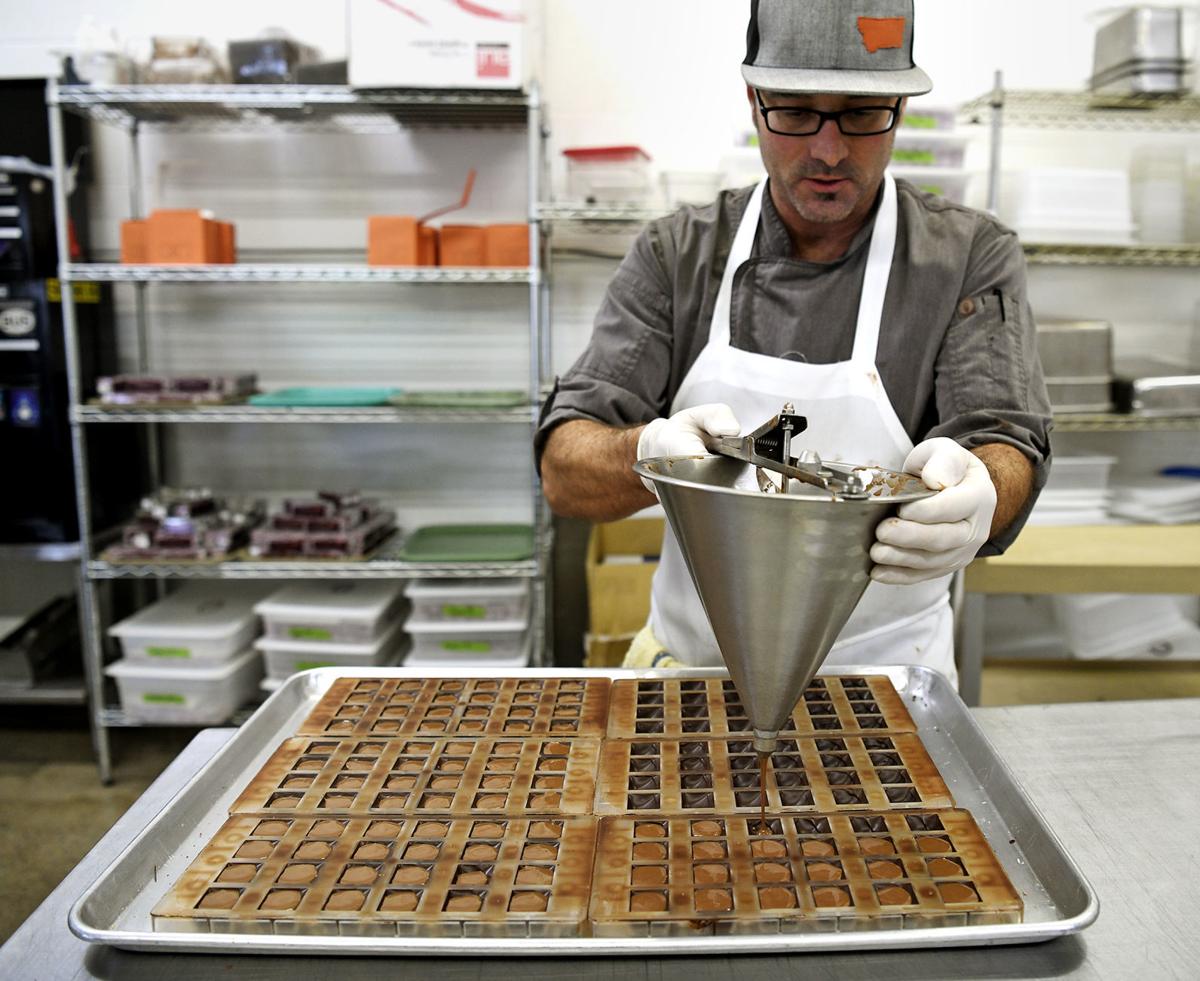 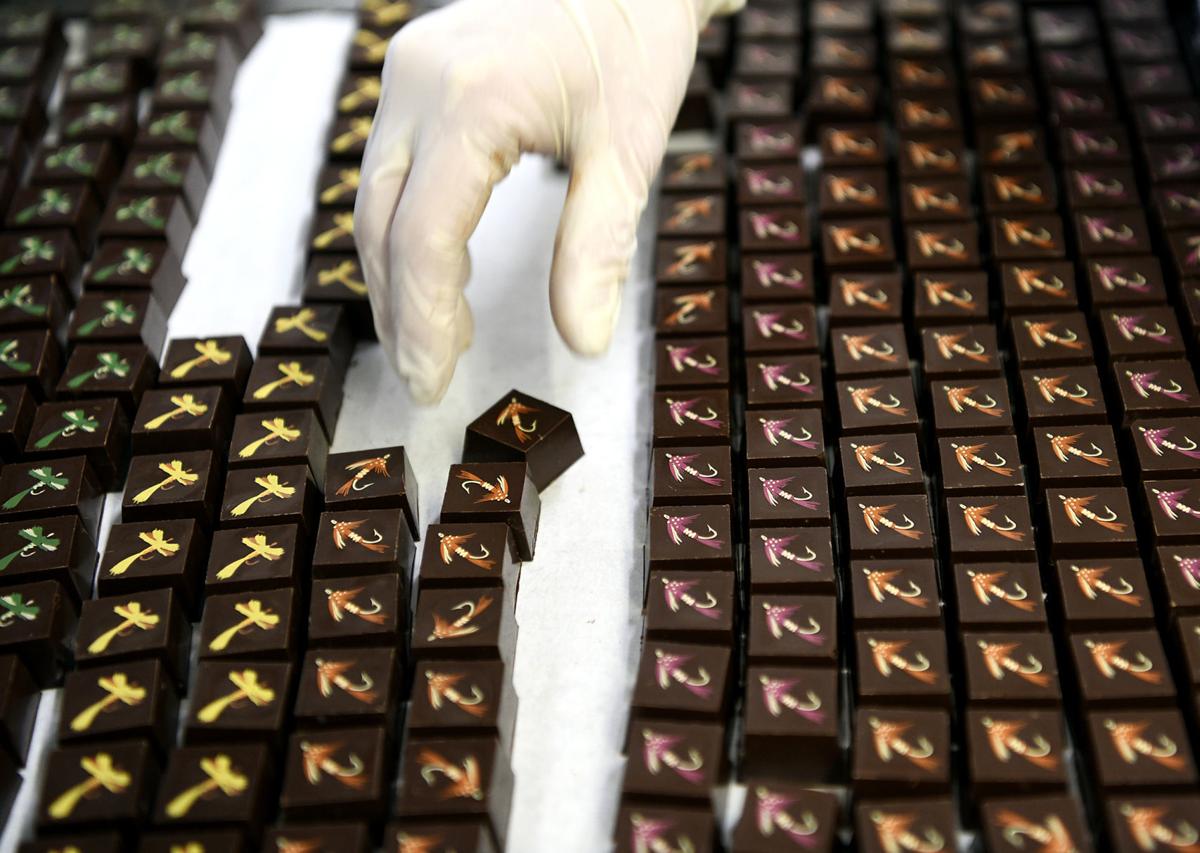 The Montana Fly Box, made by local business Posh Chocolat, features 12 handcrafted chocolates with fishing flies printed on each. Jason Willenbrock, who owns the business with his wife Ana, said the chocolates have been 10 years in the making.

In a small commercial kitchen off Third Street past Reserve, Jason Willenbrock used a funnel-shaped tool to quickly fill small cubes in a tray mold with melted chocolate. The delightful scent of bonbons being made was as pleasant as it was pungent, as he and his small staff at Posh Chocolat buzzed around trying to finish their long list of holiday orders.

This year, the local Missoula chocolatier, owned by Willenbrock and his wife Ana, has more work to do than ever before. The small cubes Willenbrock started to fill would eventually be placed in the new Montana Fly Box, a project he said they hope will become a staple gift for Montanans and visitors to the Treasure State this Christmas and for years to come.

Ten years in the making, the Montana Fly Box is a tasty marriage of Willenbrock’s love for fly fishing in Montana and his passion for chocolate. It includes 12 handcrafted dark chocolate bonbons with milk chocolate huckleberry centers, each featuring a colorful, detailed fly tie design.

Willenbrock said they’ve already filled more than 2,000 orders for the Montana Fly Box, and it’s caught the attention of companies like Orvis and Williams Sonoma, which have reached out to offer the box in their catalogs.

“We’re kind of behind orders right now because it has been pretty successful,” Willenbrock said, "Our internet is going crazy right now. We've definitely gotten a lot of internet orders nationally."

The box is meant to be repurposed once the chocolates are gone, and Willenbrock said the idea is to reuse it as a fly box.

“We want it to be a sustainable product where when you’re done with it, you don’t throw it away,” he said. “You can put flies in the cavity or you can pull out the cavity and just fill it up with stuff.”

The project is a collaboration with local company Gecko Designs, which created all of the imagery used in the fly ties on the chocolates as well as the packaging.

“I’ve done packaging for other food, but not anything where it was printed on the food,” said Grace Plant, the designer at Gecko who created the fly tie imagery featured on the chocolates.

Plant said the process for designing something to be placed directly on an edible product had constraints that other projects might not.

“If you’re just doing a poster, it’s a lot more straightforward,” she said. “But when something becomes three dimensional, you have to really consider scale, how things are going to fit and a few other components that are slightly different than just your typical print piece.”

She also had to create pigments that wouldn’t bleed and would show up on the dark color of the bonbon.

“We made sure it was thicker, and we tried to make the colors as vibrant as possible so that they would stand out on the chocolate itself, since it’s dark brown chocolate.”

Plant and the Willenbrocks went back and forth with designs until they were detailed enough to look like flies, but simple enough to be transferred onto chocolate. The fly mock-ups were then sent to a company that creates what are called “transfer sheets,” which Posh Chocolat uses to place the design onto the chocolate.

“It’s a colored cocoa butter print,” Willenbrock said. “(The transfer sheet) goes inside the mold on the bottom side, and when the melted chocolate falls in, the print adheres to the chocolates.”

Plant said she really enjoyed collaborating with the Willenbrocks, and having the final product be chocolate was an added perk.

"They both are culinary experts, which takes a bunch of creativity similar to our industry at Gecko, so they were fun to work with," she said. "Their chocolate is amazing, and it's always a bonus to get a little treat out of your project."

The Montana Fly Box also features the local chocolatier’s first-ever huckleberry chocolate, which Willenbrock said ties into this being a Montana-themed product.

“I’m an avid fly fisherman, and huckleberry obviously is another well-known Montana product,” he said, adding that he’s always been hesitant to create a huckleberry chocolate because he said everything out there already is too sweet.

“We wanted a huckleberry confection that is not that sweet,” he said. “I feel like we really nailed it with the right balance.”

The box is meant to be somewhat of a Montana memento, meant for local anglers, but also for tourists who want something sweet to leave with after visiting the state. He said they’re working on offering them in Glacier and Yellowstone national parks in the future.

“We didn’t want to make this all about Posh Chocolat,” Willenbrock said. “We wanted it to be a cool Montana product, so that’s really what we’re going for.”

The Montana Fly Box (which retails at $24.99) is available at Posh Chocolat in the Florence Building and on their website at https://poshchocolat.com/, Missoula Wine Merchants and Worden’s.

Here's a look at some business news around the Missoula area, including state aid for affordable rentals, farming classes and Pier 1 Imports closures.