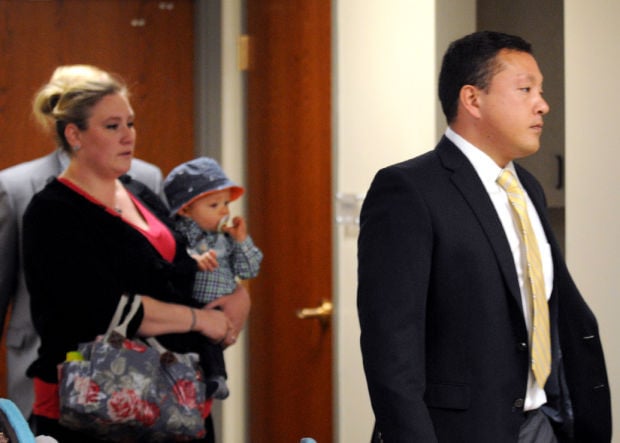 Marcus Kaarma is followed into Missoula District Court in Missoula May 21, by his wife Janelle with their child. Kaarma pleaded not guilty in the shooting death of 17-year-old German exchange student Diren Dede in April. 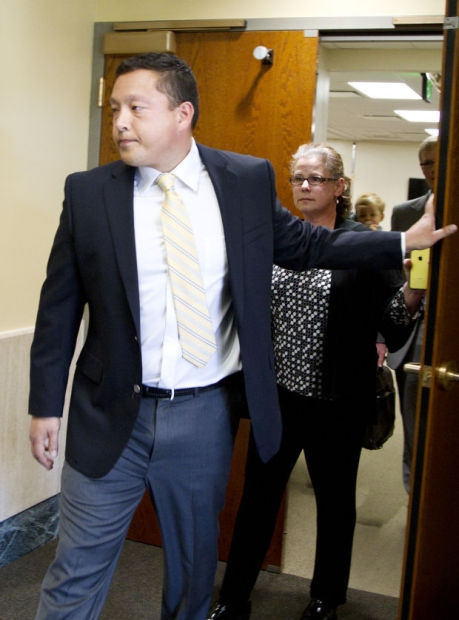 KATHRYN HAAKE of the Missoulian

McLean said attorneys provided “no compelling legal basis” for him to move Kaarma’s trial out of Missoula, where he stands charged with killing Diren Dede when the teenager trespassed in his garage, apparently in search of alcohol.

In a motion filed last week, Kaarma’s defense team demanded the trial be moved to Mineral County, or alternatively that a jury be selected from that county and bused to Missoula, contending that the Missoulian’s coverage has tainted the local jury pool.

Katie Lacny, one of Kaarma’s five attorneys, contended that the Missoulian has painted the defendant “as a conniving maniac, intent on luring and then killing unsuspecting individuals in his garage,” and said the coverage was “ripe with factual inaccuracies.”

“Words are important, and the words that have been repeatedly chosen to portray Markus and his defense have been inflammatory,” Lacny wrote. “The news media has engaged in editorializing about the allegations … a change of venue is appropriate.”

It was the defense attorneys’ second such request. And McLean’s second ruling against moving the proceedings.

In a decision filed Thursday, the judge wrote that it is the court’s duty to protect Kaarma’s right to a fair trial, but that he found “no new compelling legal basis to set aside” his original order denying the defense team’s first request to move the trial.

However, McLean decided to allow prosecutors and the defense team to jointly prepare an in-depth questionnaire to properly vet potential jurors.

McLean also hinted at a decision to close pre-trial proceedings to protect the jury pool from knowledge of Kaarma’s “prior bad acts.” However, such an order hadn’t been issued as of Thursday afternoon.

“By taking steps above, as well as by allowing an enhanced juror questionnaire to further weed out potential bias, the Court is exercising its ‘broad discretion’ over the control of pretrial proceedings,” McLean wrote.

Kaarma’s trial is set for December.

Kaarma’s lead attorney, Paul Ryan, said Thursday his renewed request for venue change wasn’t meant to be a second request, but was a response to the prosecution’s motion against their request for a venue change.

Nevertheless, Ryan said he accepts the judge’s ruling and is hopeful that a non-biased jury can be selected from Missoula County with the help of the questionnaire that will be mailed out prior to jury selection.

“We are looking for an unbiased jury,” Ryan said. “That’s our goal.”

In general, Ryan said the questionnaire will surmise potential jurors’ opinions on the case and will determine if they have already formulated opinions about Kaarma’s guilt or innocence.

In response to questions about his motivation to relocate the trial to Mineral County in particular, Ryan said he selected Mineral County because it was more conservative, but primarily because it’s convenient and hasn’t been “exposed to all the media in the same fashion as Missoula has.”

“Mineral County is within the Fourth Judicial District and it just makes it an easier venue and an easier drive for potential jurors,” he explained. “That’s really the only reason.”

Kaarma’s attorneys contend that he shot Dede, an exchange student last year at Big Sky High School, in self-defense after his garage was burglarized in the weeks prior to the April 27 incident.

But prosecutors paint a more sinister picture, arguing that Kaarma and his common-law wife, Janelle Pflager, premeditated the act by leaving the garage door partially open, setting a purse inside the garage, and setting up video surveillance and motion detectors.

When Dede entered the garage shortly after midnight, the couple was alerted to his presence by a video monitor. Kaarma grabbed his gun, exited the front door of the home and turned toward the garage, firing four times into the darkness.

Two of the shots struck and killed Dede. Prosecutors later charged Tristan Staber, 18, and another teenager who is a minor, with burglarizing Kaarma’s home on at least one prior occasion.

Neither alleged burglar had any connection to Dede.

Missoula man who fatally shot 'garage-hopping' teen has criminal past

The man accused of fatally shooting a German exchange student in the garage of his Grant Creek home last April has a criminal record, both in …

Markus Kaarma, the 30-year-old Missoula man accused of fatally shooting a German exchange student in his garage, will undergo a psychological …

MISSOULA -- Less than 24 hours after a German exchange student was shot and killed inside a Missoula garage, a local legislator proposed a bil…

MISSOULA -- A German teenager did not plead for his life in the seconds before he was shot to death in a Grant Creek garage, the Missoula woma…

Trial of man who shot exchange student to stay in Missoula

Marcus Kaarma is followed into Missoula District Court in Missoula May 21, by his wife Janelle with their child. Kaarma pleaded not guilty in the shooting death of 17-year-old German exchange student Diren Dede in April.