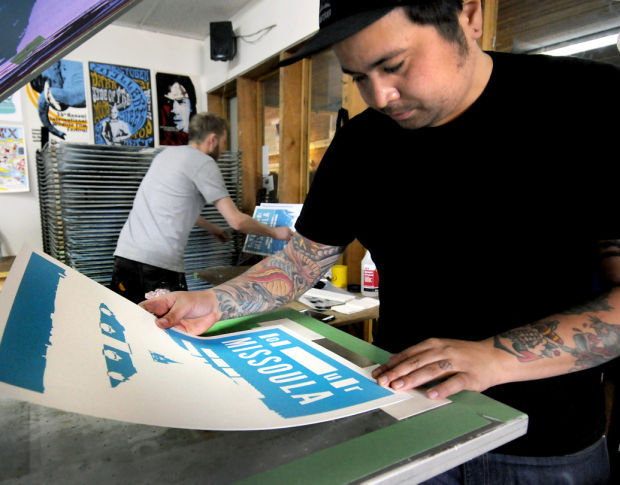 Alfred Gaither, right, and Foster Caffrey work last week on printing a poster designed by Missoula artist Andy Smetanka that takes many of the design elements of the cover of Jon Krakauer's forthcoming book titled, "MISSOULA: Rape and the Justice System in a College Town," and blocks out some of the letters in Krakauer's name and the subtitle, leaving only "our MISSOULA." "I wanted to come up with something that was an artful protest against the name of the book, but it ended up being a little more ambiguous," Smetanka says. 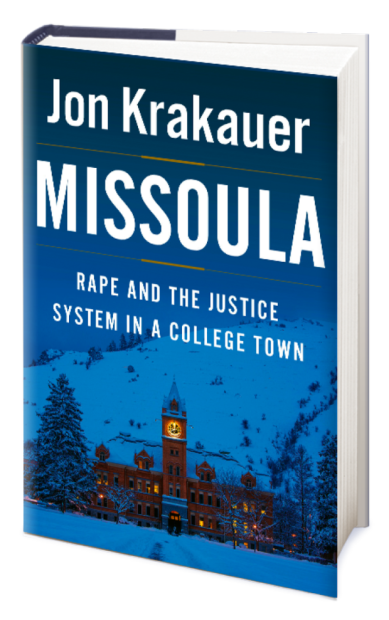 MISSOULA -- Local filmmaker and writer Andy Smetanka designed and printed an agitprop-style poster that depicts a censured cover of Jon Krakauer's book, "Missoula: Rape and the Justice System in a College Town."

"I think he cashed in on the magic of saying that word a little bit cheaply," Smetanka said of "Missoula."

James Grunke, president of the Missoula Economic Partnership, isn't worried one bit that the book that ties rape to this city will affect his work.

Grunke talks with two to four companies a week about locating in Missoula, and the bestselling author's story about mishandled rape investigations hasn't come up once.

"We normally try to think things through, but I have no anticipation there's going to be impacts to us, to my business," Grunke said.

On Tuesday, Krakauer's much-anticipated book about campus rape will be in bookstores, and national media outlets already are running stories about it. The book makes it clear that mishandled rape is typical in college towns.

However, when news broke that the book would use the name of Missoula as its title, professionals whose jobs involve marketing the community said the story would hurt the city's reputation. At least one marketer discussed creative ways the community could rally around its positive stories.

Last week, though, the only official action plan came from Fact and Fiction, which is hosting a forum with the author on May 6.

Ginny Merriam, communications director for the city of Missoula, said some people are asking local officials to deliver a "forceful if not angry response" to the book. Its contents, though, have stayed mostly under wraps.

"It's a little bit difficult to answer anything when you're unable to see the book or to know what's in it," Merriam said.

Smetanka doesn't know what's in the book, but he knows Krakauer has tapped prepositional phrases for other titles. "Into the Wild." "Into Thin Air." "Under the Banner of Heaven."

Why not one for Missoula? (See related interview with Krakauer.)

"I wanted to come up with something that was an artful protest against the name of the book, but it ended up being a little more ambiguous," Smetanka said.

In fact, the depiction by him and Greg Twigg appears to reflect some community members' reaction to the rape reports, as well as the later protest against the title.

In the poster, Smetanka blocked out letters in Krakauer's name so the poster says "Our Missoula" instead of "Jon Krakauer" and "Missoula: Rape and the Justice System in a College Town."

Early on, some UM officials and Grizzlies boosters similarly tried to block out news the campus had a rape problem. Former UM vice president Jim Foley, for instance, protested the media's use of the term "gang rape" to describe a report a UM student made that she'd been assaulted by four UM Grizzlies football players.

The poster also reflects the reaction many people had to the book's title. Why not call it Boulder, where Krakauer is based?

"Missoulians are kind of wonderfully defensive and touchy about our image," Smetanka said.

The local artist is a fan of Krakauer's work, though, and he isn't going to ignore the contents of "Missoula."

"I'm going to read the book with great interest," he said.

When news of the book title broke, UM assistant vice president for marketing Mario Schulzke was among the professionals who said the name would tarnish the community's reputation. At the time, he suggested Missoula shouldn't try to offer a rebuttal to the book.

Rather, he discussed touting positive stories in the community. Schulzke pointed to Liquid Planet's anniversary video with comments from people about their favorite thing in Missoula.

Ultimately, he said last week, the book is important, as is the issue. He and other people whose job is to paint Missoula and UM in a positive light talked about a formal response, but he said he believes the best approach isn't a coordinated announcement.

"I think the things we need to do as a community is not to craft some masterful message, but to just point out the many things we have done to try and address the issue," Schulzke said.

At City Hall, Merriam said members of the community have suggested appropriate responses across the spectrum. Some want a town rally, others want radio silence.

Communications people are falling somewhere in the middle, she said. They're not going to rehash old stories, such as the one of a gang rape told to "60 Minutes," but they are talking about how to respond to people here.

The response? "We've learned a ton, we've come a long way, and we collaborate better than we have been."

She is looking forward to future milestones. In the next couple months, both the city and UM are due to complete improvements they agreed to put in place in contracts with the U.S. Department of Justice, she said.

"There is a side of it too that is good because clearly, it's a problem on college campuses across the nation," Merriam said. "And judging just by news coverage nationally, most campuses and towns are not to the point that we are and need to do some work.

"So it's good to talk about it and to sort of keep it out there."

Krakauer discusses 'Missoula: Rape and the Justice System in a Small Town'

MISSOULA -- Jon Krakauer has files about rape cases in some 30 different cities in the U.S.

Efforts to combat sexual assault make up next chapter

This week, Missoula residents are reading about our community in Jon Krakauer’s book, “Missoula: Rape and the Justice System in a College Town…

Filmmaker raising money for Missoula documentary, "A Place Sort Of"

Animator Andy Smetanka remembers seeing it back in his hometown of Billings.

Alfred Gaither, right, and Foster Caffrey work last week on printing a poster designed by Missoula artist Andy Smetanka that takes many of the design elements of the cover of Jon Krakauer's forthcoming book titled, "MISSOULA: Rape and the Justice System in a College Town," and blocks out some of the letters in Krakauer's name and the subtitle, leaving only "our MISSOULA." "I wanted to come up with something that was an artful protest against the name of the book, but it ended up being a little more ambiguous," Smetanka says.