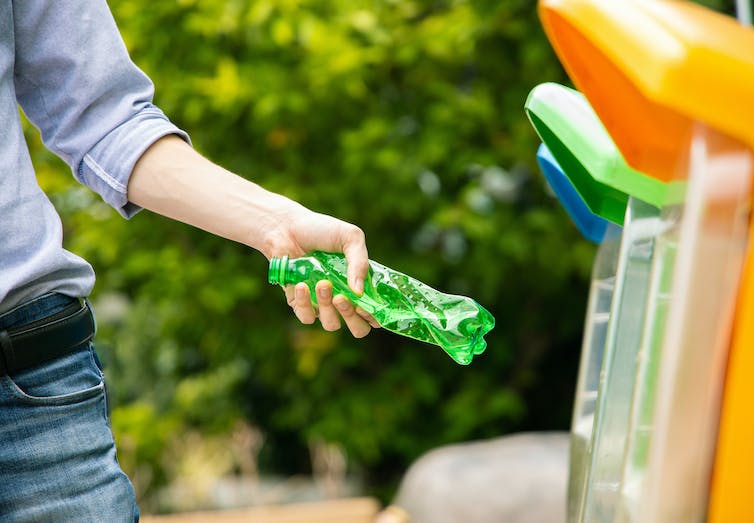 More of this, please. PictureAccent/Shutterstock.com

You finish that last sip of morning coffee and stare at the empty paper cup in your hand. Should it go into the recycling bin, compost, or be landfilled or incinerated?

You are not alone. Most Americans are confused about recycling, and the crisis driven by China’s decision to stop accepting most foreign scrap material is worsening the problem. At this point it’s hard to be sure that items put in the recycling bin are recycled.

Research shows that more often than not, Americans give up trying to sort their recyclables. Or they engage in wishful recycling, tossing nonrecyclables into the bin. Even so, most waste never gets that far. People feel intimidated by the task.

The average American generates about 4.5 pounds of waste each day. Only 1.5 pounds of it is recycled or composted. This means that over an average lifetime of 78.7 years, one American would send 67,000 pounds of waste to landfills. That’s more than twice the weight of a cruise ship anchor. 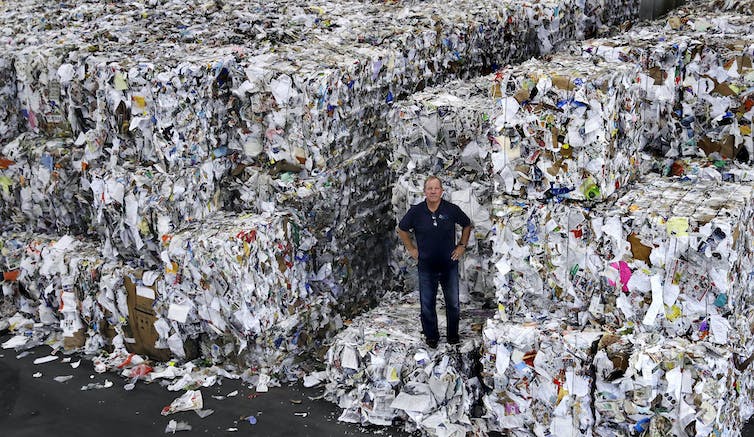 Scrap materials are piling up at U.S. recycling centers that no longer can ship them to China. AP Photo/Charles Krupa

Although many communities and advocates have adopted regulations and action plans centered on moving toward a circular economy, major barriers still make it hard for individuals to reduce, reuse and recycle. Existing policies have been developed based on insights from engineering and economics, and give little consideration of how human behavior at the individual level fits into the system.

My colleagues and I use behavior science to foster goals ranging from energy conservation to community solidarity. In a recent paper, economist Marieke Huysentruyt, Ph.D. candidate Emma Barnosky and I uncovered promising solutions to the recycling crisis driven by personal benefits and social connections.

Why recycling is so hard

Why is getting Americans to recycle more so challenging? First, many of them don’t understand waste problems and recycling strategies. Few are aware of the environmental problems waste causes, and most have a hard time connecting individual actions to those problems.

Most people don’t know where their waste goes, whether it includes recyclables or what can be made from them. They may know what day to put out curbside trash and recycling, but are unsure which materials the companies accept. In a 2019 survey of 2,000 Americans, 53% erroneously believed greasy pizza boxes could be recycled, and 68% thought the same for used plastic utensils. 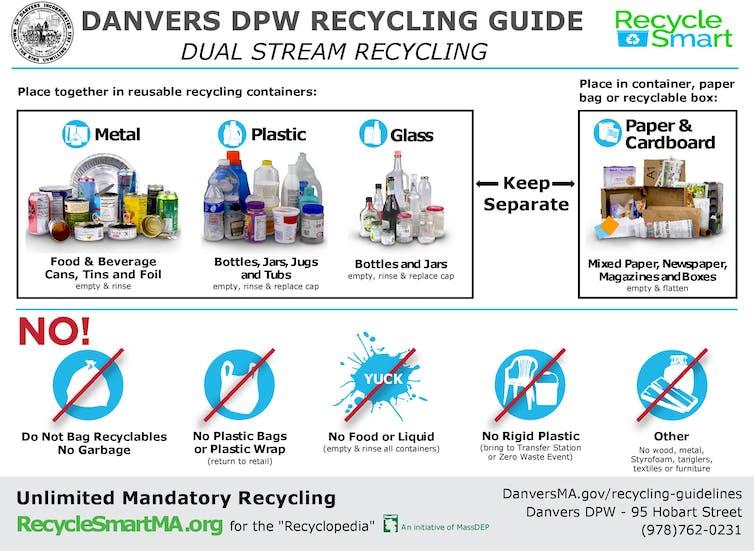 Complex guidelines can make it hard for consumers to recycle correctly. Town of Danvers, Mass.

Another 39% of respondents cited inconvenience and poor access to recycling facilities as major barriers. California pays a 5- to 10-cent redemption fee for each beverage container, but the facilities often are inconvenient to reach. For example, the closest to my home in Los Angeles is eight miles away, which can involve driving for an hour or more. That’s not worth it for the few cans my family produces.

Most U.S. consumers are opposed to pollution, of course, but research shows that they seldom view themselves as significant contributors. As taxpayers, they hold local governments responsible for recycling. Many are not sure what happens next, or whether their actions make a difference.

What can be done to address these barriers? Better messaging, such as emphasizing how waste can be transformed into new objects, can make a difference.

But as I argue in my 2018 book, “The Green Bundle: Pairing the Market With the Planet,” information alone can’t drive sustainable behavior. People must feel motivated, and the best motivations bundle environmental benefits with personal benefits, such as economic rewards, increased status or social connections.

In a 2014 survey, 41% of respondents said that money or rewards were the most effective way to get them to recycle. Take-back systems, such as deposits on cans and bottles, have proven effective in some contexts. Such systems need to be more convenient, however.

Don’t forget to turn your points into chances to win hundreds of dollars in gift cards from your favorite stores and brands! Ends 6/14 at 11:59pm.https://t.co/IG3DWrH87k pic.twitter.com/ochCKs0S6t

Returning bottles directly to stores is one possibility, but novel strategies are being deployed across the country. “Pay-as-you-throw” policies charge customers based on how much solid waste they discard, thus incentivizing waste reduction, reuse and more sustainable purchasing behavior. Recyclebank, a New York company, rewards people for recycling with discounts and deals from local and national businesses.

Social status also motivates people. The zero-waste lifestyle has become a sensation on social media, driving the rise of Instagram influencers such as Bea Johnson, Lauren Singer and Kathryn Kellogg, who are competing to leave behind the smallest quantity of waste. Visibility of conservation behavior matters, and could be a powerful component in pay-as-you-throw schemes.

It’s also nice to have support. Mutual help organizations, or community-led groups, trigger behavioral change through social connections and face-to-face interactions. They have the potential to transfer empowering information and sustain long-term commitment.

One famous example is Alcoholics Anonymous, which relies on member expertise instead of instructions from health care specialists. Similarly, Weight Watchers focuses on open communication, group celebration of weight loss progress and supportive relationships among members.

French startup Yoyo, founded in 2017, is applying this strategy to recycling. Yoyo connects participants with coaches, who can be individuals or businesses, to help them sort recyclables into orange bags. Coaches train and encourage sorters, who earn points and rewards such as movie tickets for collecting and storing full Yoyo bags.

The process also confers status, giving sorters positive social visibility for work that is ordinarily considered thankless. And because rewards tend to be local, Yoyo’s infrastructure has the potential to improve members’ community connections, strengthening the perceived and actual social power of the group.

This system offers a convenient, social, incentive-based approach. In two years the community has grown to 450 coaches and 14,500 sorters and collected almost 4.3 million plastic bottles.

Such novel behavior-based programs alone cannot solve back-end aspects of the global waste crisis, such as recycling capacity and fluctuating scrap material prices. But our research has shown that by leveraging technology and human behavior, behavioral science can encourage people to recycle much more effectively than simplistic campaigns or slogans.

Insight, in your inbox each day. You can get it with The Conversation’s email newsletter.

This article is republished from The Conversation under a Creative Commons license. Read the original article.