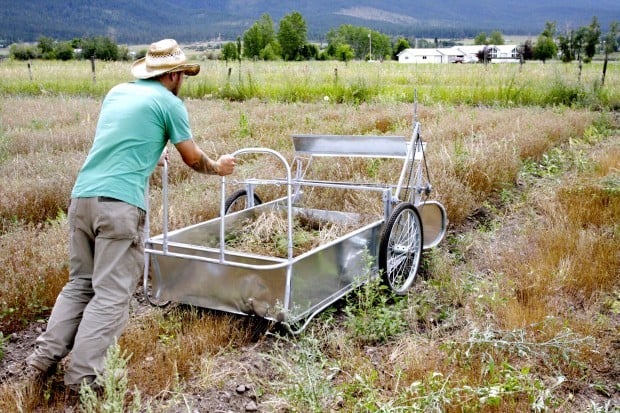 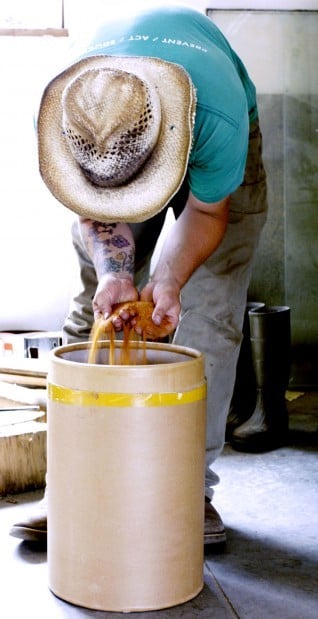 Christiaens sifts through Holboell’s rockcress, genus Arabis holboellii, seeds that have been harvested and are then stored in his shop, to be loaded into glass vials and sold. Just after the seeds are collected, they go through different gauged sifters to rid them of bugs and other unwanted materials. 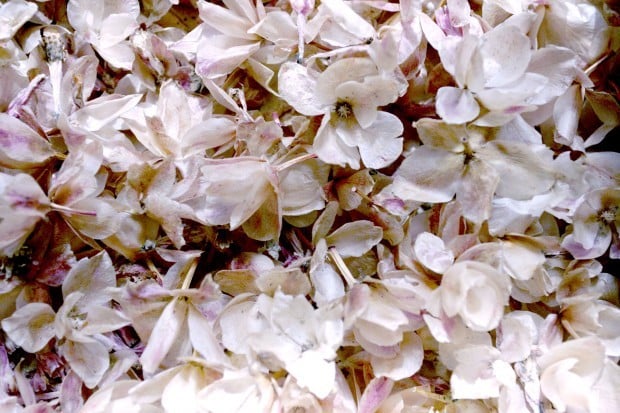 A box full of dried bitterroot, genus Lewisia rediviva, blooms sit in Christiaens's garage as a reminder of the huge harvest. 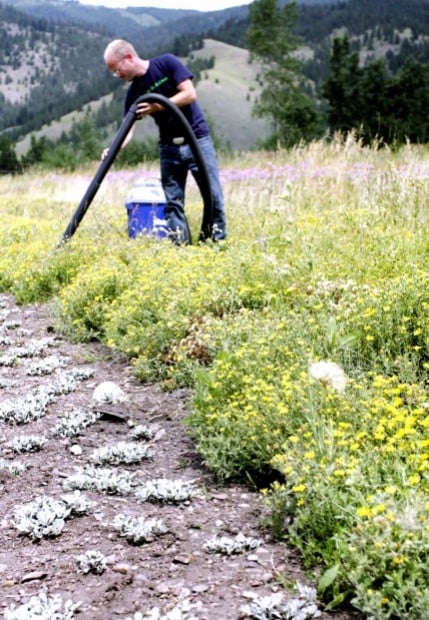 By VICTORIA EDWARDS for the Missoulian

ARLEE - It's hard to choose favorites in the wildflower business.

The intensive labor required to collect the minuscule seeds from a plant can sometimes overtake its outward splendor. Some fly away with the wind; others pop from their pods and land six feet away.

"I don't know if my favorite is the easiest to collect," Bryce Christiaens of Native Ideals Seed Co. says with a laugh.

But he seems to have found the best of both worlds with penstemon.

Of the 40 different species that grow here in Arlee, four are penstemon.

Whether it's fuzzy-tongued, waxy-leaved, small-flowered or Wilcox's penstemon, these funnel-shaped flowers are more than just aesthetically pleasing, they hold their seeds well too - making Christiaens' job just a little bit easier.

Christiaens and his wife, Rebecca Shoemaker, started Native Ideals Seed Co. in 2008. She has the botany degree and works full time in Missoula, while he's worked as the Ravalli County noxious weed coordinator. When they started, only two species of wildflowers grew in front of their home; now, the summertime blooms of 30 budding species can stop a driver along Jocko Road dead in their tracks.

But you don't have to travel through the Jocko Valley to see Native Ideals' wildflowers on display. Most of the millions of seeds collected each summer go to restoration projects around the area.

They're planted on Missoula's open space land, at the National Bison Range, along roadsides, where water lines have been installed, at old mine sites and in forests blackened by fire.

As the name suggests, Native Ideals grows only wildflowers native to western Montana. They're perfectly adapted to the environmental conditions here, so can be left alone to grow - something they've done for the centuries they've been here.

But Christiaens' and Shoemaker's impact may take a while to notice, as most of their seeds take two years to bloom.

Much of this business is a waiting game, in fact. For Christiaens and Shoemaker, it's waiting for newly planted species to bloom so they can up their seed production and begin to supply large-scale restoration projects. The couple is three years out from producing blue camas en masse.

"You can see the look in their eyes when you say two years, let alone five," Christiaens says.

Waiting for wildflowers may be torturous for some, but for the two to five years you wait, there is a long-lived reward. Wildflowers live much longer than other flowers, and take less water because they're native to the area and are accustomed to drought.

"In the West, the idea of saving water is a pretty big drive," he says. "People want those things, but it's hard to wait."

But waiting is the least of Christiaens' worries at this point. The summer harvest season is in full swing now, and his days are filled with collecting the millions of seeds awaiting him.

With diverse species come diverse seeds - and with no "how to harvest wildflowers" handbook on the market, the process has fit well with Christiaens' eye for innovation - a cleverness learned growing up on a ranch in eastern Montana.

A shop-vac is used to suck up wind-dispersed seeds similar to those of dandelions. Others like Clarkia - a flower in harvest right now - are cut with a combine harvester, commonly used to harvest wheat, pushed through the rows of flowers. And some must be gathered by hand - a time-consuming and laborious process.

The lupine flowers are currently covered with cheesecloths in order to keep the drying pods from popping and throwing their seeds six to seven feet away.

"But that's also turned out to be too labor intensive," Christiaens says.

It's a constant trial-and-error process, and every year they figure out a new and easier way to do something - like when he and an intern working on the farm figured out a gun's ammo loader could also be used to fill the miniscule vials of seeds for the farmers market and other locations around Missoula.

"It's been nice because there might be one thing that holds us back, and then we figure it out, rather than 50 things at a time holding us back," he says.

Despite the difficulties that come with the territory, there are regular reminders of the beauty that comes with the business - the hummingbirds flocking to the Gilia, the buzz of the bees in the rows of blooming flowers, the passers-by stopping in awe and the sentimental connection people who live or visit Montana make with wildflowers.

"There always seems to be this one native plant that was at their grandma's cabin or they saw it on a hike or in Glacier (National Park)," Christiaens says. "Out-of-staters want plants that remind them of Montana if they used to live here or spent time here."

And even if he's around them constantly, Christiaens has a constant reminder of the wildflowers, too - a tattoo showcasing 13 different species on his arm.

"I was trying to decide which one was my favorite and couldn't decide, so I have 13," he says.

You can purchase Native Ideals wildflower seeds at the Good Food Store, the Green Light, the Missoula Community Food Co-op, Sam's Spade Garden Tools & Wares in Hamilton, at their booth at the Clark Fork River Market and online at www.nativeideals.com.

Make sure you're not hurting your skin with these bad habits

Make sure you're not hurting your skin with these bad habits

PennyWise Episode 24: 10 tips to keep your moving costs down

PennyWise Episode 24: 10 tips to keep your moving costs down

Christiaens sifts through Holboell’s rockcress, genus Arabis holboellii, seeds that have been harvested and are then stored in his shop, to be loaded into glass vials and sold. Just after the seeds are collected, they go through different gauged sifters to rid them of bugs and other unwanted materials.

A box full of dried bitterroot, genus Lewisia rediviva, blooms sit in Christiaens's garage as a reminder of the huge harvest.