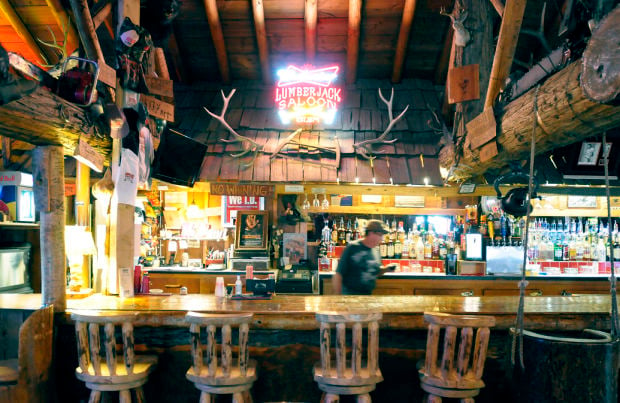 The Lumberjack Saloon has been a fixture on Graves Creek, between Lolo and Lolo Hot Springs, since the 1970s. Full of rough-hewn logs and history, the bar was born from logging roots. 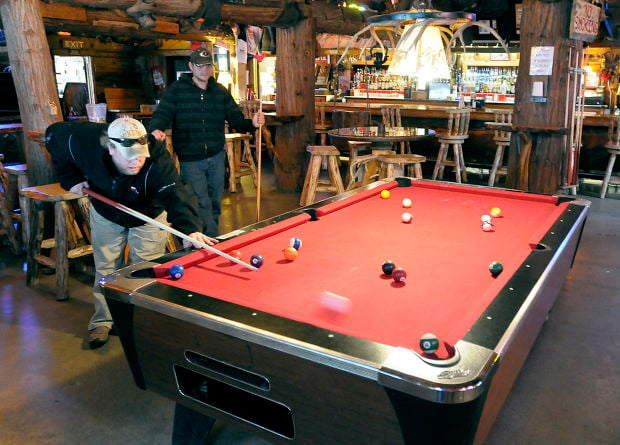 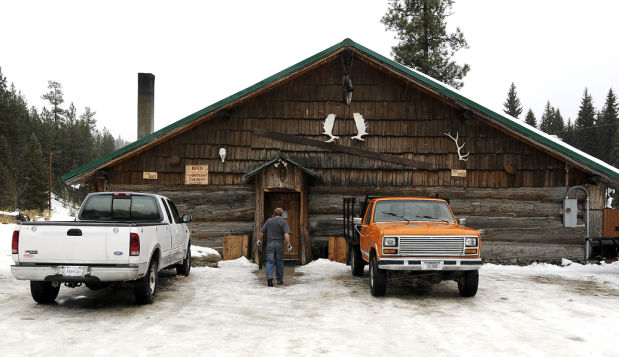 The huge cedars of the Lumberjack were cut and hauled from the Lochsa by builder and founder Don Babcock. 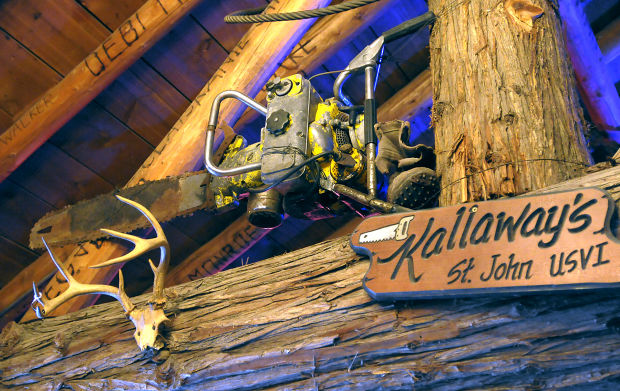 Early chain saws, old logging boots and other objects from logging history hang in the bar’s rafters next to names branded into the timbers.

GRAVES CREEK – If you ring the bell at the Lumberjack Saloon, the sign above the bar says you have to buy drinks for everyone present.

Ringing the bell before noon on a Wednesday morning wouldn’t do you any damage because the saloon set deep in the Montana woods – a stone’s throw from the Idaho state line – isn’t open yet.

But with the band Northern Lights playing Saturday, the drinks lined up and the fires crackling, ringing that old tarnished bell later in the week could cost you a pretty penny. Or so the locals say. The owner declined to participate in this story.

Some have called the Lumberjack’s builder and founder, Don Babcock, a local legend. A Butte native born in 1931, he moved with his family to the Bitterroot Valley when he was 9 and left home at 14 to wrangle horses.

Babcock’s love affair with western Montana was born. His stories became legend, along with his skills with the saw. He felled the mighty cedars to build this saloon in 1974, and his mythic Western tales still feed the local story mill.

“He was quite a character, quite a storyteller,” longtime logger Ray Bennett said after Babcock’s death in 2009. “He was kind of a legend, actually.”

It makes sense that the Lumberjack – born from logging roots – is still rooted in logging lore. Etched into the wooden timbers are tributes to past heliloggers. Burned into the bar are rambling names like “Low Rider Pobs” and “Stump Jumper-n-Squirrely.”

Even “Scott’s E-Q Muffler” of “MSLA MT” has a spot at the bar. There’s some guy named “Ranger Danger” who, in 1983, left this message in the bar: “From Maryland to Montana; 5 days in a tent; what the hell am I doing here?”

Zackery Morris, the general handyman who today is fixing a stove in a steady January drizzle, said the Western red cedar logs were hauled by Babcock and his son, Darell, up from the Lochsa River drainage, over Lolo Pass to this patch of ground on the banks of Graves Creek.

The cedar walls still peel as cedars do, and a welcoming plume of wood smoke wafts on the winter air. Inside, the chairs are cut with chain saws from old logs. Some, Morris said, have split with time, but a few relics remain intact.

“Champion International was big back then,” said Morris, who worked these hills as a logger back in the 1970s. “This was the only stop between Lolo and the hot springs.”

Back in the 1970s, the bar was “wide open and pretty rustic,” Morris recalled. The bar is still wide open and, at a glance, it’s just as rustic. Vintage photographs hanging near the bar remember the saloon’s early days.

There’s Don “Grandpa” Babcock, who’s sawing a giant cedar in a floppy-eared hat. Morris looks closely at the image and says Babcock may have been sawing a log for his saloon when the image was taken.

Next to the photo is a picture of his wife, Mary Ellen Babcock, who’s tending bar at the Lumberjack. The bar has a larger selection of drinks these days, all stacked nicely under low light with bright labels turned enticingly outward.

But in the picture, the bar looks the same with Mary Ellen standing behind it – a two-man ripsaw hanging from the wall and the hand-cut shaker shingles applied to the walls.

“She’s younger in that picture than Kella (the owner) is now,” Morris said.

The saloon opens at noon and the day’s first real customers arrive. Ryan Budge and Joey Wingo made the 45-minute trip from Missoula to shoot pool beside a crackling fire under trophy mounts, chain saws and graffiti dating back 40 years.

“It’s just a quiet bar in the woods,” Budge said, drawing back for a shot at a triangle of neatly racked balls. He returned to Montana after an eight-year stint in Chicago and, he says, he likes it much better here. “It’s not nearly as crowded.”

At the moment he’s right – the Lumberjack is a quiet bar in the woods. But it’s hard to believe a saloon with deep ties to western Montana’s golden industry is always so tranquil.

A tin sign on the wall lends sage advice to lumberjacks far and wide, “Beauty is in the eye of the beerholder.” There’s a mounted jackalope and a moose. The turkey vultures are just down the road, wandering through the willows lining Lolo Creek.

Upcoming bands include the Northern Lights, the O’Connells and Wild Coyote. Chances are the “quiet bar in the woods” won’t be so quiet.

We care: Young man in need of emotional support dog

A woman with disabilities and a very limited income is in need of lightly used rugs for her home.

Man with disabilities and a very limited income and passion for music is looking for a donation of an acoustic guitar.

Facebook is rolling out new ways to customize your feed

10 best eateries in Helena (According to Yelp)

10 best eateries in Helena (According to Yelp)

10 best eateries in Missoula (According to Yelp)

10 best eateries in Missoula (According to Yelp)

Survey: Most people will 'try anything' to lose weight

Survey: Most people will 'try anything' to lose weight

The Lumberjack Saloon has been a fixture on Graves Creek, between Lolo and Lolo Hot Springs, since the 1970s. Full of rough-hewn logs and history, the bar was born from logging roots.

The huge cedars of the Lumberjack were cut and hauled from the Lochsa by builder and founder Don Babcock.

Early chain saws, old logging boots and other objects from logging history hang in the bar’s rafters next to names branded into the timbers.