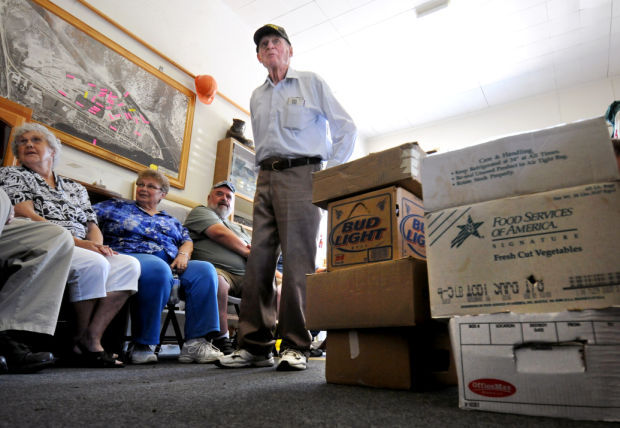 For the past six years Bonner native Jack Demmons has been researching the history of his hometown, starting in the 1800’s to the 21st century. Demmons has donated his efforts, consisting of several boxes filled with historic information, to the Bonner History Center. 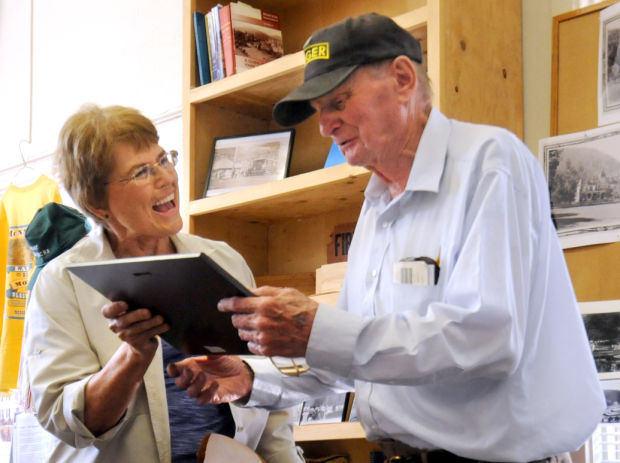 Bonner History Center volunteer Judy Matson presents Demmons with a certificate of appreciation for all his hard work during a ceremony at the history center last week.

For the past six years Bonner native Jack Demmons has been researching the history of his hometown, starting in the 1800’s to the 21st century. Demmons has donated his efforts, consisting of several boxes filled with historic information, to the Bonner History Center.

Bonner History Center volunteer Judy Matson presents Demmons with a certificate of appreciation for all his hard work during a ceremony at the history center last week.

BONNER – Margaret Strong knows not what she wrought.

He was a 12-year-old living in nearby Piltzville. She was that teacher most of us had, or hope we do, the one that inspires something in us we didn’t know was worth being inspired over.

For Strong and Demmons, it was both a love of history and a deep appreciation for military service.

More than 70 years later, and nearly four decades after Strong’s death, that something has paid more dividends for this community.

Demmons, 84, presented the Bonner History Center with six boxes last Tuesday. They represented six years of research into Bonner and neighboring communities, from the 1800s to the 21st century. Much of it came from local newspaper articles gleaned from microfilm at the Missoula Public Library, where Demmons spends his days.

Where the Missoulian in 1930 informed readers that the Bonner branch of the public library had almost doubled circulation in its first 10 years, Demmons has added a personal note:

“I remember the library in the Margaret Hotel,” he’s typed below the brief Page 3 article that he transcribed verbatim. “It was in the large lobby and the books were arranged on the north side of the hotel below windows … Mom would take (brother) Bill and myself on a sled to Bonner in the winter time to get books from the library, and then to the meat market at Bonner too at times.”

Demmons brought the boxes from his Missoula home to the history center, which shares space with the Bonner Post Office. A dozen appreciative volunteers and/or Bonner old-timers were on hand to receive them and swap yarns of the old days.

Judy Matson noted Demmons’ post-Bonner careers in ROTC at the University of Montana, as a smokejumper, as an Army ranger and his dozen years in the Army’s on-base school system in Alaska.

“I traveled the Alaska Highway 24 times in the days when it was almost all gravel,” Demmons recalled.

He was beckoned back to Bonner in 1974 to start what became a 15-year stint as superintendent of the elementary school he’d attended three decades earlier.

In that role, still strongly influenced by Mrs. Strong, Demmons and his faculty headed by fifth-grade teacher Gladys Peterson produced “A Grassroots Tribute: The Story of Bonner, Montana,” a remarkable local history produced in connection with America’s bicentennial in 1976.

One offshoot was a call for old photos of the area.

“Jack sent word out through the kids to ask their folks to bring in old pictures,” recalled Willie Batemen, a classmate of Demmons’ at Bonner and Missoula County High School. “They buried him alive in pictures.”

The end product was a unique collection of some 1,600 reproduced photos that were mounted on panels and displayed each year at the Hellgate Lions Club’s annual Old-Timers Day in the school gym. Several years ago current superintendent Doug Ardiana and the Bonner School board purchased a handsome cabinet for the school library to keep them in.

“The collection was deemed so valuable that in the historic mitigation settlement, money was set aside to digitize the photos at the University of Montana, ensuring that they would be preserved,” she said.

Today the digitized collection is part of the Montana Memory Project under Demmons’ name. Google, say, “Jack Demmons Margaret Hotel” and you can call up a dozen or more pictures of or having to do with the grand old, Victorian-era centerpiece built in 1892 and demolished in 1957.

Demmons started his library searches and interpretations of Bonner’s colorful past six years ago, and he’s not done yet.

“This is my heritage, the Bonner area,” he said. “My relatives came here in the 1880s. My dad was the river boss on the Blackfoot.”

Herb Demmons arrived in Bonner in the mid-1880s from New Brunswick, Canada, when the Hammond brothers launched the mill in the mid-1880s. Jack’s mom, Aafje DeWit Demmons, moved with her family to Johnson Creek, the first drainage up the Blackfoot, when she was a Bonner student and spent 25 years as the school clerk.

Demmons said he couldn’t do his research without the help of the staff at the public library, where he can be found virtually any time it’s open. He said he especially has Paulette Parpart to thank.

“The hours he spends here … If I don’t see him for a couple of days, I kind of wonder, OK, what’s going on?” said Parpart, the library’s cataloger and head of genealogy.

At one point Parpart set up Demmons with a rolling suitcase to haul results of his research home. Now she’s found him his own storage drawer at the library.

He walks more than a mile each day from his home in Missoula’s midtown district. Demmons said last week he’d trod 1,003 miles in the past 30 months, most of it to and from the library.

When he gets there he scans newspaper microfilm in the Montana Room, sometimes with purpose but often at random. He’ll print out any article that interests him. They pertain to Bonner but also to all aspects of Missoula’s past.

A smokejumper in the early 1950s and a paratrooper with the 82nd Airborne Division at Fort Bragg, N.C., after that, Demmons has written reports on smokejumping history, as well as the lumber industry in the Western U.S. He has a special interest in local military history, zeroing in on men killed or missing in action in World War II and Korea.

“I was just a kid in 1941 and I remember virtually everyone out there (in Bonner) went to war who was qualified. Even some women,” he said.

The all but obsolete electric typewriter in the Montana Room doesn’t have Demmons’ name on it, but it might as well have, Parpart said.

“He buys the ribbons himself,” she said. “I don’t know what’s going to happen when that thing breaks because you can’t hardly find a typewriter any more.”

The clippings and writings in Demmons’ boxes are dated but stacked in no special order. Demmons recommended they be sorted into 18 categories, from the mill, school and churches to railroads, military service, society news, and obituaries.

That means work ahead for history center volunteers like Matson and Minie Smith, who seemed eager to dive in.

“It’s not the end of the world if it’s not organized in some particular way right now,” said Donna McRae, head of archives and special collections at UM’s Mansfield Library. “I think the fact that he has annotated them with his own information and knowledge makes them richer.”

The challenge, McRae said, will getting word out that the papers are available. “Hopefully the Bonner History Center is getting enough of a reputation that anybody interested in researching Bonner knows to go there.”

It was Demmons’ first trip to the history center but he had pleasant memories of the building, which served as the Missoula electric streetcar roundhouse until 1932. During Demmons’ childhood it housed Bill Howell’s Roundhouse eatery in the 1930s and ’40s and served as a bus station.

“Nice place, very pleasant atmosphere, good food,” he recalled. “It wasn’t hamburgers and fries at that time; mostly milkshakes and Coke is what I had.”

The donation of his work, Demmons said, is his way of thanking Bonner – “my old home area.”

In return, Matson presented him with a certificate of appreciation, a touching moment for Demmons.

He grew up hiking, swimming and skiing in Bonner, attending school and “listening to the stories of the generations that came before,” Matson told him. He has preserved that history “without consideration of the amount of time and money spent from your own pocket,” she said.

“You have returned full circle to present to your community one more gift. On behalf of all of us, a simple but sincere thank you.”

Mrs. Strong would have been proud.

Like a beacon signaling a bookworm’s safe haven, Missoula’s newest little library sits across from Sentinel High School on the neatly manicure…

NEIGHBORS: Artist’s murals in public eye all around Polson

POLSON – Art takes on a whole new meaning when a live bird perches on a painted branch.