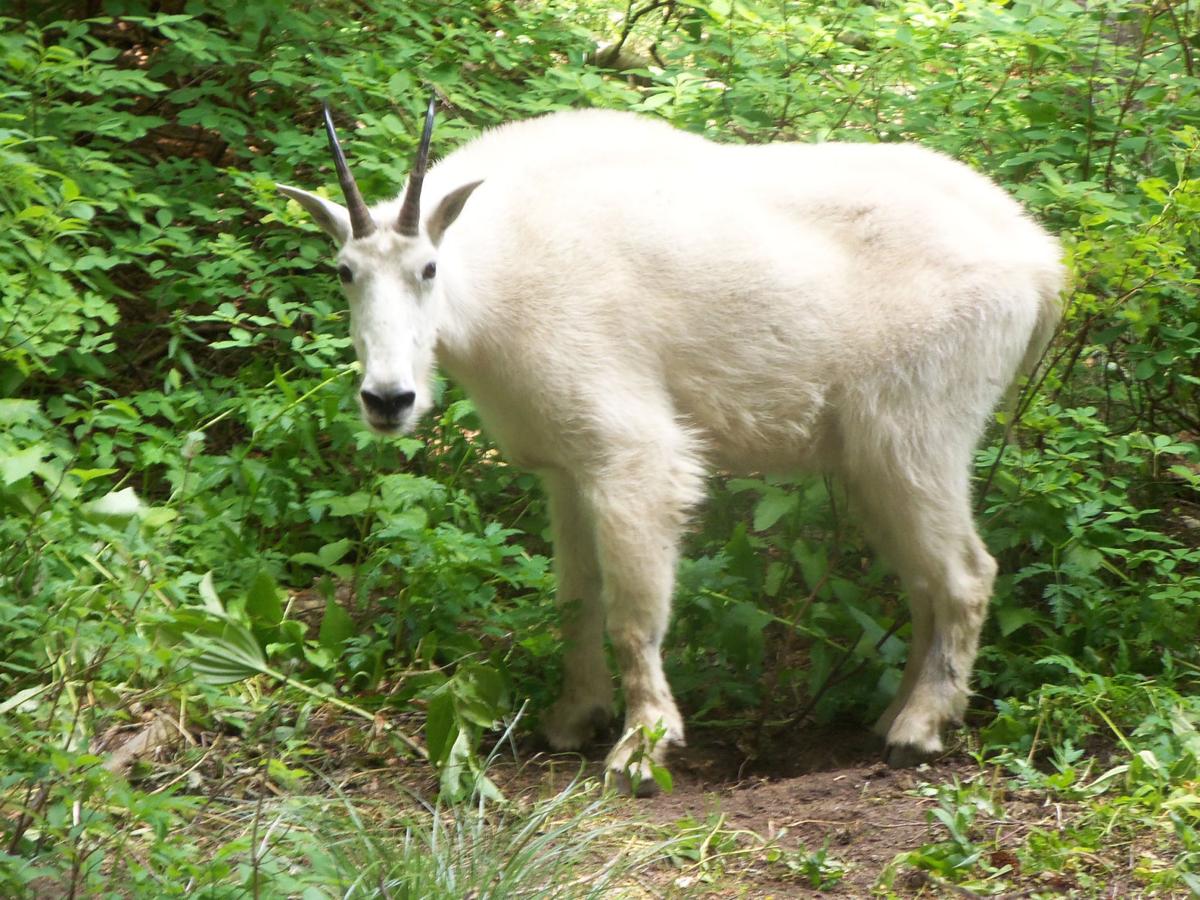 A mountain goat strays from the safety of steep slopes to visit a campsite along Heart Lake in the Bitterroot National Forest south of Superior, Montana. Photo by Jim Groth 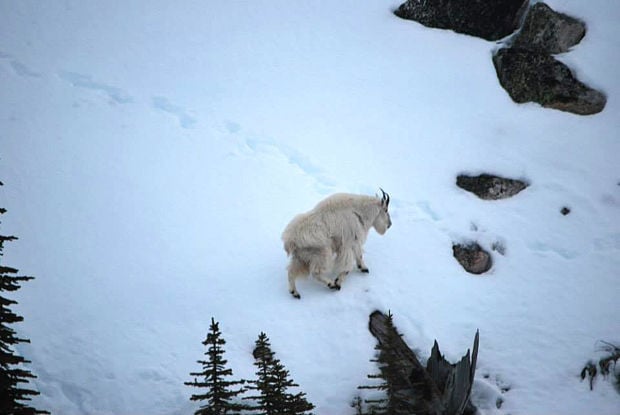 A mountain goat spotted in the Fred Burr canyon walks across a snowbank.

Mountain goats and hikers are meeting in dangerously close proximity at Heart Lake in the Bitterroot Mountains.

The goats near the popular backpacking destination south of Superior, Montana, have given up the safety of the state-line cliffs, lured by human-related salts and foods around the mountain lake.

The attraction away from the cliffs has left the mountain goats more vulnerable to predators such as wolves and mountain lions.

Campers also are at risk. A backpacker's dog was injured by a mountain goat last week, according to Liz Bradley, Missoula wildlife biologist with Montana Fish, Wildlife & Parks.

Bradley heard about the incident as she made the 3-mile hike to the lake after posting warning signs at the Heart Lake trailhead and up at road at the Idaho-Montana Stateline Trail on Hoodoo Pass.

"I ran into several groups of hikers that had talked to another hiker who was carrying his small dog back down the trail to take to the vet because of an unfortunate encounter with a nanny who was likely defending her kid," she said. "Sounds like the nanny charged and gored the dog."

Bradley was responding to a report by Colville backpacker Jim Groth, who encountered the mountain goats in the last week of July.

Groth and a friend arrived in midafternoon and found a campsite on the southwest end of the lake.

"Around 4 p.m., we encountered four goats nearby, and soon two ran through our campsite and nine or 10 were along the shore of the lake to the south," he said.

For the next couple of days, "the goats were almost constantly present nearby, from one to several at any one time," he added. "They moved a lot, traveling along the hiking trail and into the five or six sites there.

"Only one other site to the south was occupied, and they had more constant goat presence than we did."

The goats were not wary of the hikers, he said. "It was difficult keeping a decent distance from them when they invaded the camp area. We could keep them back with motion and noise or by charging them with loud steps and shouts.

On the third day, the two backpackers hiked up the drainage to Pearl Lake where they found two campers who said they'd been "besieged" by 14 mountain goats.

"We stopped near the lake farther up at a campsite with a fire ring to fish, and we experienced the same kind of invasion of five animals," he said.

"The goats were eating the lush vegetation in the area around Heart Lake. But they were also clearly interested in the campsites.

"This area has heavy use, and there is a lot of human waste around the campsites. I think this was most important in bringing them into the immediate areas of campers. I saw two animals rooting around in the dirt."

The goat education signs provided by Fish, Wildlife & Parks recommends urinating away from trails and campsites and stay at least 150 feet from mountain goats.

"I realize that it is a bit different to have goats coming into your camp, and therefore difficult to give them space when they're invading yours," Bradley said. "But I still thought it was an appropriate message to send.

"It is certainly concerning to hear about these reports of increased habituation in the Heart Lake area," she said, noting that the agency had received no recent reports until she heard from Groth.

"This is a small and fairly isolated population of native goats and we want to do all we can to encourage their persistence in that area and to keep hikers and campers safe."

She said Thursday that Fish, Wildlife & Parks will be monitoring the situation.

"We want people and goats to stay safe," she said. "Hopefully the signage will help bring some more awareness to hikers and give them some things to think about to help decrease conflict."

Aggressive mountain goats that have lost any fear of humans have been an issue in several areas in recent years, including Olympic National Park.

The trail to Scotchman Peak, a popular hiking destination overlooking Clark Fork, Idaho, was closed by the Forest Service last year after a hiker was injured by a goat.

The Friends of the Scotchman Peaks Wilderness have posted educational signs. They've also enlisted volunteer mountain goat ambassadors to try to inform hikers about the dangers to them as well as the goats if they continue to offer the animals food and let them lick their sweaty skin.

The goal is to convince hikers to keep away from the goats and scare them away if they come close, said ambassador Mary Franzel.

"I'd rather see a goat get hit with a rock than see it get shot because it's become dangerous," she said.

The following tips are posted in some areas where mountain goat encounters have been reported in Montana:

Do we really gain weight in the winter?

Do we really gain weight in the winter?

PennyWise Episode 45: Four issues that can impact your home and wallet during the winter months

PennyWise Episode 45: Four issues that can impact your home and wallet during the winter months

A mountain goat strays from the safety of steep slopes to visit a campsite along Heart Lake in the Bitterroot National Forest south of Superior, Montana. Photo by Jim Groth

A mountain goat spotted in the Fred Burr canyon walks across a snowbank.