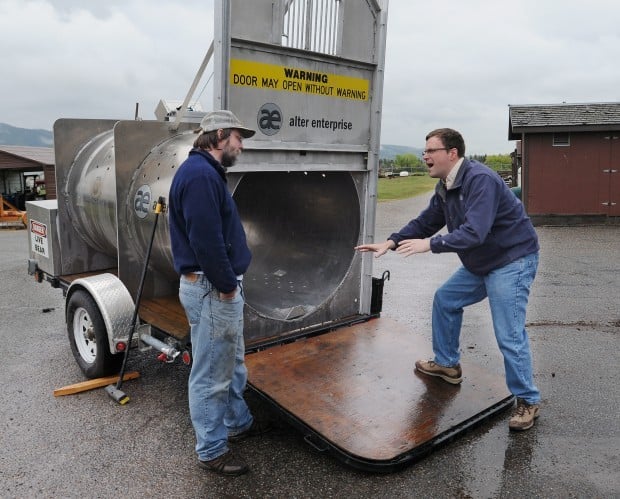 Ryan Alter, right, of Alter Enterprises talks trapping techniques with bear specialist Jamie Jonkel of Montana Fish, Wildlife and Parks at the agency’s Missoula office recently. Alter Enterprises builds high-tech traps equipped with remote control and cameras so biologists can release bears or other undesirable animals without having to visit the site. 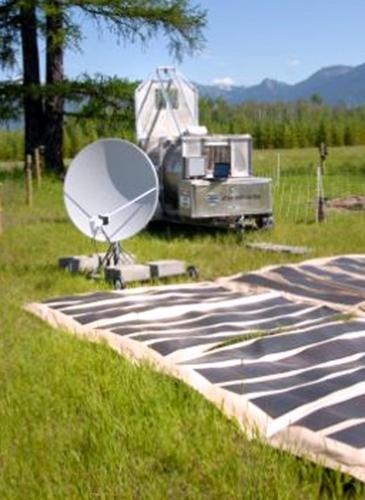 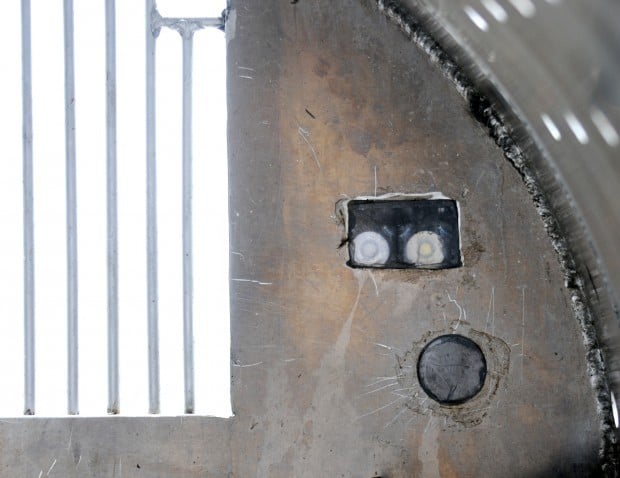 If you think the bears Ryan Alter catches in his traps are cool, you should have seen the skunk.

Alter has built a bear trap that sets itself, takes mug shots and phones home when it catches something. It's undergoing its third season in the field with Montana Fish, Wildlife and Parks bear managers.

"The nature of what we do is: You don't know until you look," said Alter, whose East Missoula-based Alter Enterprises builds high-tech gizmos for field biologists. So it wasn't too surprising when his trap's onboard camera got shots of a Condon-area skunk sneaking bites of the deer-haunch bait last fall.

"Then one day, he got more ambitious," Alter said. "It's like he thought, ‘I'm tired of coming in and eating my fill and leaving - I'm going to take the whole damn thing.' That haunch weighed about 50 pounds, and we've got pictures of him dragging it a quarter mile through the snow. That's four or five times his body weight. We were in shock and awe."

The problem with culvert traps is they attract all kinds of critters besides bears. Alter's cameras have recorded everything from mountain lions to teacup-bearing grandmothers checking out his installation. Those are interesting, but when you're spending scarce time and resources catching bears, everything else is a waste.

"We'll have traps out, sometimes 20 at a time," said Jamie Jonkel, the bear manager for FWP Region 2. "They're at the end of some godawful road with no cell coverage and you have to go check it every day - that's a lot of time. And they're touchy situations. You can't have people coming in and out all the time and expect the trap to attract a bear."

The basic grizzly bear culvert trap has been around for decades. It's a big aluminum tube with a sliding door at one end and a baited tripwire at the other, mounted on a trailer so it can be towed where it's needed.

Alter added cameras both inside and out, with satellite uplinks that feed the images back to the trap manager's computer in real time. He linked that to a set of solar-powered battery mats that generate enough power to run the electronics even on a cloudy day. And he's working on a sensor that will read the computerized identification chips that biologists are now implanting behind captured bears' ears.

All that technology costs money. An Alter trap with midrange bells and whistles costs about $50,000. A typical no-tech grizzly culvert trap runs about $10,000.

But at some point, the electronics will pay for themselves. Without the satellite links, FWP wardens would have to drive daily to the often-remote locations where traps are placed to check for captives. Catch a lion or skunk, or nothing, and the trip is a waste of gas and time. Over a season, those misfires add up.

And some places you don't want to visit too often. For example, many U.S. Forest Service gated roads have strict limits for how many vehicles are allowed in per week. Waste a bunch of trips on daily diligence, and a project can be shut down before a bear gets caught.

The cameras are also good enough to read the ear tags and make out the color phases of individual bears. That allows wardens to check if they've got the bear they want - the sow instead of her cub, for example.

"If you don't want the bear, just push a button on the line and release it," Alter said. "You can see if the bear didn't touch the bait, and reset it."

The electronics have the opposite effect on humans. Jonkel said one of his biggest trapping headaches is people coming by to check out a trap. That can either scare off animals in the area or, in one case, result in tragedy. Last year, a rancher came to inspect a trap he heard slam shut, Jonkel said. The trap had caught a grizzly cub. And while the rancher was inspecting it, the grizzly mother arrived. The rancher shot and killed her, leaving Jonkel with an orphaned cub.

Putting the photo records out to the public has produced an unexpected feat of social engineering, Alter said.

"The cameras give landowners the opportunity to look at the pictures," Alter said. "They send the photos out on Facebook, and they're too busy to go look at the trap."

Alter Enterprises has been in business about six years. It started out developing trail cameras for biologists to monitor backcountry sites. The challenge is designing gear that can survive and communicate in places with no electricity, phone lines or shelter from the weather.

"We're a solutions provider," Alter said. "If you have a biological problem that technology can solve, we work toward building you the contraption you need."

They hunker down and they get cozy and they live off their fat for winters at a time, but guess what?

"What they do is called ‘denning,' " said educator Alli Depuy to about 80 kindergartners at Rattlesnake Elementary on Wednesday morning, upsetting - just a bit - the supposed common knowledge held by even adults.

The East Missoula entrepreneur has spent three years field-testing a better bear trap – one that phones home when it’s caught something, remotely releases wrong bears and can even reset itself. The patent means Alter Enterprises can start marketing its invention to bear managers and researchers around the world.

See wildlife photos and video from remote trail cameras and traps at http://www.condonwildlifecams.com.

Four wellness trends that need to be on your radar

How to shake off a bad night's sleep

How to shake off a bad night's sleep

Signs you may be in a toxic work environment

Signs you may be in a toxic work environment

Ryan Alter, right, of Alter Enterprises talks trapping techniques with bear specialist Jamie Jonkel of Montana Fish, Wildlife and Parks at the agency’s Missoula office recently. Alter Enterprises builds high-tech traps equipped with remote control and cameras so biologists can release bears or other undesirable animals without having to visit the site.

A camera mounted inside the trap, right center, lets biologists know what they have incarcerated. The high-tech Alter traps can cost upward of $50,000. Photo by MICHAEL GALLACHER/Missoulian
© Copyright 2022 Missoulian, 2291 W. Broadway Missoula, MT 59808 | Terms of Use | Privacy Policy | Do Not Sell My Info | Cookie Preferences
Powered by BLOX Content Management System from TownNews.com.
You don't have any notifications.