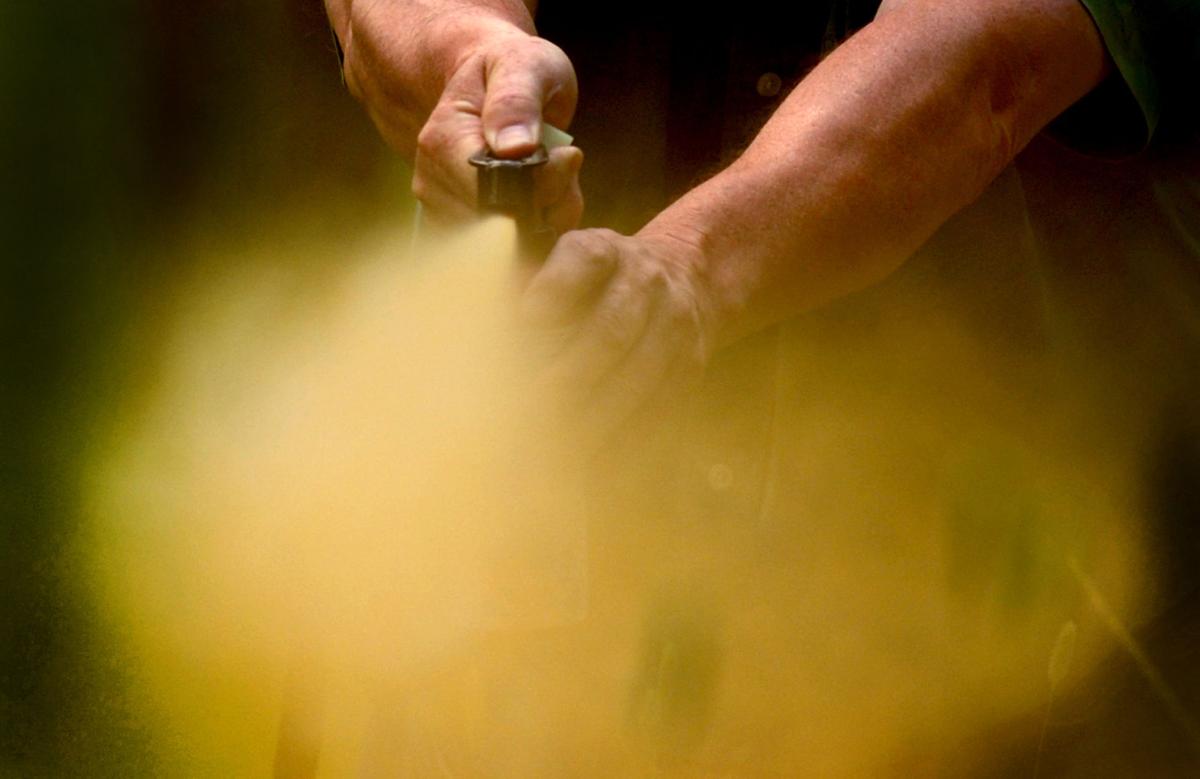 While bear spray has been recognized as an effective tool for self defense in grizzly bear encounters for more than 30 years, debate over the best specifications for spray duration continues to roil the wildlife management world. 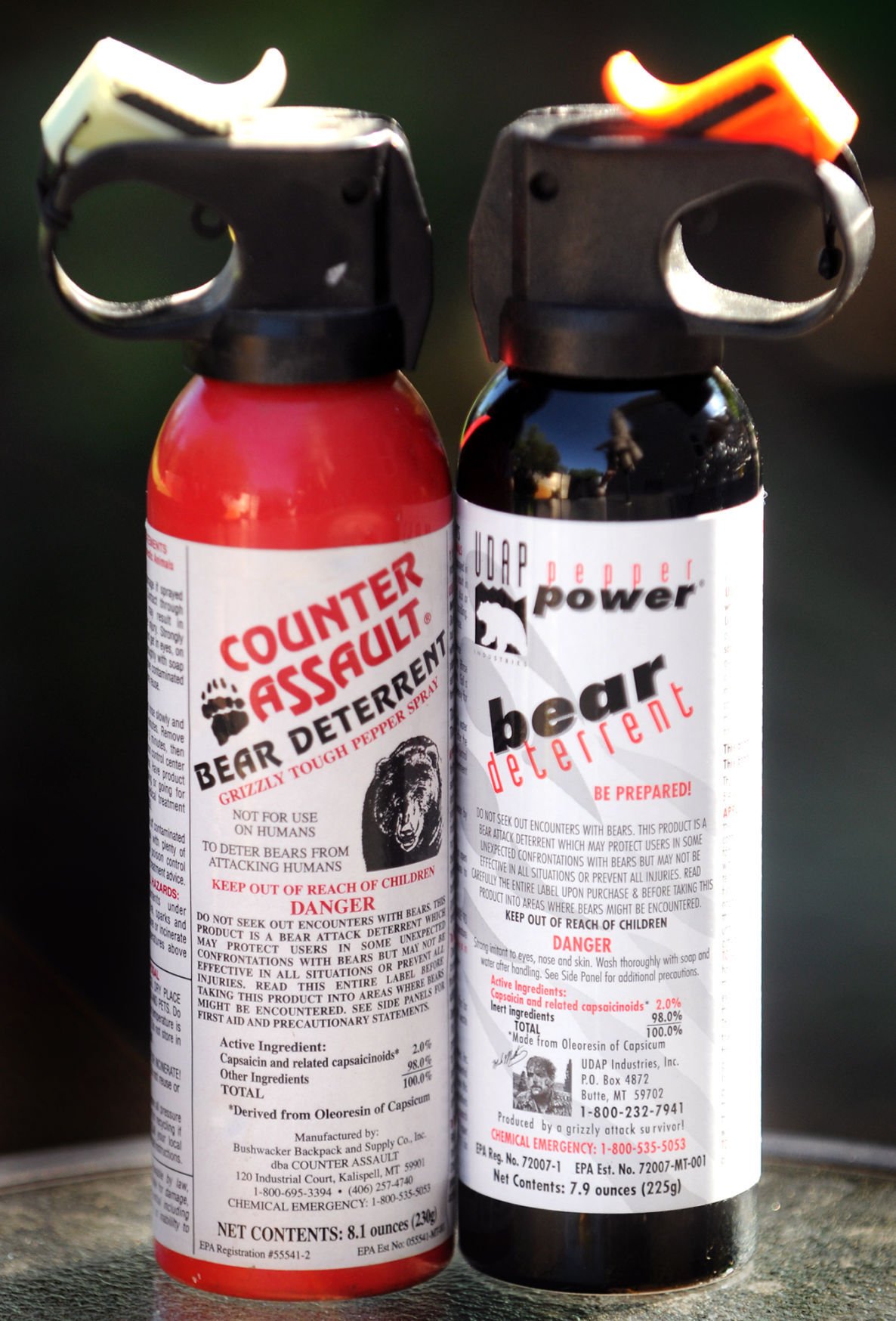 Bear spray is proven to be an effective deterrent when used properly.

The first thing you need to know about bear spray is that it works: Field studies show it’s far more effective than firearms at stopping a bear attack without injuring either the person or the bear.

The second important thing is the U.S. Environmental Protection Agency classifies bear spray as a pesticide.

Beyond that, we go to the lawyers.

That’s what happened last week during a meeting of the Interagency Grizzly Bear Committee in Bonners Ferry, Idaho. Makers of UDAP Bear Spray questioned why the organization continues to recommend a six-second spray duration in its buying criteria. Four companies make EPA-registered bear spray, and all have at least 1 percent capsaicinoid active ingredients (the same irritant that makes chili peppers hot), hold at least 225 grams of fluid and project at least 25 feet.

But Kalispell-made Counter Assault Bear Spray blasts for a minimum 7.2 seconds, while Butte-made UDAP lasts 4 to 5.4 seconds. UDAP argues that’s a distinction without a difference.

“(T)he 6-second spray recommendation is arbitrary, capricious and serves no other meaningful purpose other than to give one bear spray company a market advantage over all the others,” UDAP attorney Greg Dorrington told the IGBC.

That’s not what customers in the field say, Counter Assault general manager George Hyde rebutted. He noted UDAP made the same complaint to the IGBC in 2007, but the recommendation remained the same.

“A great number of bear management and research people who work with bears on daily basis would prefer longer spray time and distance if it were available,” Hyde said. “Should the IGBC be bowing to commercial pressure rather than following the advice of people who use it?”

For its part, IGBC spokesman Gregg Losinski said the organization would look at the claims.

“We’re not a regulating body saying this is the right tool,” Losinski said. “There’s no seal of approval, just a recommendation for certain distances and duration. The EPA approval is the main thing.”

And the EPA only governs the chemical composition inside the can, not the physical action of its use. The National Park Service, U.S. Forest Service, Montana Department of Fish, Wildlife and Parks and many other public and private agencies have been vigorously promoting bear spray use as an effective way of managing bear conflicts. All those bodies generally refer back to the IGBC recommendations for what can to use.

The Interagency Grizzly Bear Committee convenes a roundtable of people responsible for grizzly management in the Pacific Northwest. It includes the state fish and game departments of Montana, Wyoming, Idaho, Washington, Alberta and British Columbia, as well as federal agencies such as the U.S. Fish and Wildlife Service and the NPS. It formed in 1983, shortly after the grizzly gained threatened species status under the federal Endangered Species Act.

Three decades later, the committee has shifted from recovering grizzly populations in the Rocky Mountains to delisting what it considers a recovery success story. A side task has been public education about living with bears, which is how it got involved in the bear spray topic.

Missoula’s late grizzly bear researcher Chuck Jonkel was instrumental in developing bear spray as a non-lethal alternative to firearms for bear protection. Working with University of Montana graduate student Carrie Hunt, he helped popularize the idea of using a pepper spray developed for dogs as a bear deterrent in the early 1980s.

Counter Assault founder Bill Pounds started developing a commercial bear spray based on Jonkel and Hunt’s research in 1982. In 1998, members of the IGBC asked for a review of bear spray product effectiveness. The following year, the IGBC published a position paper suggesting guidelines for choosing and using bear spray. Those guidelines included the 6-second spray duration.

UDAP accused the committee of playing favorites in 2007 by recommending the 6-second spray duration and by featuring a red spray can in its educational materials. Counter Assault has typically packaged its spray in red cans, while UDAP uses a nearly identical can with an orange or blue label.

The IGBC changed the color of a generic can illustration on its website to blue, but it kept the 6-second spray duration recommendation. While the website explicitly states it makes no endorsements of a particular product, Counter Assault prominently features the IGBC guidelines in its promotional materials.

“We know we’ve lost sales due to it,” UDAP general manager Tim Lynch said. “We believe it’s misinformation for the public. There’s a lot of support showing all the EPA-registered bear sprays are working great. We want to get everyone on the same page.”

Neither Lynch nor Hyde would cite specific sales numbers of their spray cans, although Hyde said his company had seen about 20 percent annual growth in each of the past five years.

IGBC Chairman Jim Unsworth of the Washington Department of Fish and Wildlife referred the matter to a subcommittee for review, with a plan to have results by the group’s winter meeting.

“We realize bear spray is becoming a big business,” Losinski said. “From a dollars-and-cents standpoint, there’s different concerns. But we’re focused on what works as far as keeping bears out of trouble. We’ve never wanted to venture into what is the best bear spray. Both companies are doing good things, but ultimately it is a business.”

Although it uses the same chemical as many anti-mugger sprays, bear spray isn’t intended to incapacitate a bear.

Instead, it degrades a charging bear’s senses of smell, sight and hearing. Bears don’t like to get into fights when they don’t have all their advantages working, and nine times out of 10 they break off the charge when encountering a cloud of irritating gas.

After testing a variety of things, from air horns to skunk smell, University of Montana biologist Chuck Jonkel and graduate student Carrie Hunt got the best results with a capsicum-based spray originally developed for deterring dogs. Capsicum is the heat-inducing chemical in chili peppers, and forms the basis of other “pepper sprays” used by law enforcement agencies.

The Interagency Grizzly Bear Committee has detailed instructions on how to use bear spray for self defense in a bear encounter.

Some things to be aware of when dealing with bear spray:

• Bear spray for personal use may be transported over the U.S.-Canada border, but must be declared at the crossing station.

• Bear spray may not be transported on commercial aircraft, as either hand- or checked-luggage.

• Bear spray cans have an expiration date after which the propellant pressure may decline and reduce the effective spraying distance. Spray effectiveness can also be affected by improper handling, including excessive high or low temperature exposure.

• Bear spray is intended to be used against an active bear. Using it like a passive repellant, such as spraying campsites or clothing, may actually attract bears.

• Bear spray cans that have been partially discharged or passed their expiration date can be used for training purposes, and some state and federal agencies collect donated cans for that purpose. Unwanted cans should be disposed of as hazardous material, following instructions printed on the label.

Grizzly coordinator steps down after 35 years

Chris Servheen says he’s retiring after 35 years as the U.S. Fish and Wildlife Service grizzly bear recovery coordinator so he can spend more …

The roomful of biologists had lots of funny ideas why Ethyl the grizzly bear logged 2,800 miles arcing from Coeur d’Alene, Idaho, past Florenc…

When a grizzly bear killed a hiker in Yellowstone National Park last year, millions of people took it personally.

The Latest: Helicopter to search for bear in deadly attack

DUPUYER – Standing on the edge of a 1.5-million-acre classroom, Kristina Gillispie looked over roughly 250 pounds of homework.

This is a strange summer for Missoula.

A rare opportunity for the public to pitch ideas for grizzly bear recovery takes place in Missoula on Thursday.

Bears vs. bikes: Who's at risk?

Thomas Baumeister put up a slide of a regal bull elk, followed by an image of tenderloin steaks ready for the grill.

The Interagency Grizzly Bear Committee officially stepped out of the bear spray market on Tuesday, taking a neutral stance regarding competing…

While bear spray has been recognized as an effective tool for self defense in grizzly bear encounters for more than 30 years, debate over the best specifications for spray duration continues to roil the wildlife management world.

Bear spray is proven to be an effective deterrent when used properly.