It was nine agonizing hours from the time Rick Dvorak fell Saturday on the Broken Heart ice falls — fracturing his pelvis, sacrum, a vertebra and a rib — to the time he was loaded into an ambulance.

“It was really painful. I was moaning pretty good there for a while,” Dvorak said from his Billings hospital room Monday. “It took me awhile before I could start using words.”

The 42-year-old Billings carpenter was with several other experienced climbers on the aptly named Broken Hearts ice flow in South Fork, about 38 miles southwest of Cody, Wyoming.

Dvorak had climbed up three sections of frozen waterfall and was nearly up a fourth, twisting a big screw into the ice every so often to clip his climbing rope into. A second climber was on belay, anchored at the other end of the rope to prevent a long fall.

“It was kind of my fault,” Dvorak said. “I usually place a screw every 15 feet or so. I was getting a little too high and even brushed off some snow to place another screw. But, the climbing was kind of easy in that spot and it’s a lot of work to place a screw.”

But, he was so close to the lip of the falls he decided to go for it. He swung his ice ax into the ice and lifted his leg to climb up, and then found himself in mid-air.

About 20 feet down he slammed hard into the ice and then fell another 10 feet where he dangled from his harness at the end of the rope.

That was at about 11:30 a.m. His climbing partner lowered him to a ledge where other climbers were able to meet him, call 911, and stabilize him as best they could.

From there it was still three ice sections, a total of about 100 vertical feet, from the base of the climb.

"It was a relief to be in good hands, to be with guys I know to to know everyone cared and got it done as well as they could," he said.

Rescuers including his friends, the Park County Search and Rescue team, two members of the Cody Regional Wilderness Medical Team and volunteers from the Big Horn County Search Unit were able to travel in the rough terrain to within about a half-mile of the frozen falls. From there, they hiked in through the heavy snow.

By about 2:30 p.m., a PCSAR volunteer and a Wilderness Team member were able to ascend the several ice faces to reach Dvorak, the Park County Sheriff’s Office posted on its Facebook page Monday morning.

“Rescue personnel packaged him for the descent by rope down two ice flow pitches,” the Sheriff’s Office said. “He was then carried down the mountain to the Argo and then transported the rest of the way out to a waiting ambulance.”

By 8 p.m., Dvorak was on his way to Cody Regional Hospital before being transferred to Billings Clinic where Monday morning he was looking at the bright side.

“The good news is that I don’t need surgery, so a full recovery in three months is possible,” he said.

Park County Search and Rescue Coordinator Bill Brown participated in the rescue and commended the cooperation of the various agencies and the other recreational ice climbers.

“When the need was there, everyone stepped up,” he said.

The concrete deck, sidewalks, and parapets have deteriorated so badly on the Yellowstone River Bridge that the National Park Service is proposing to replace the structure. 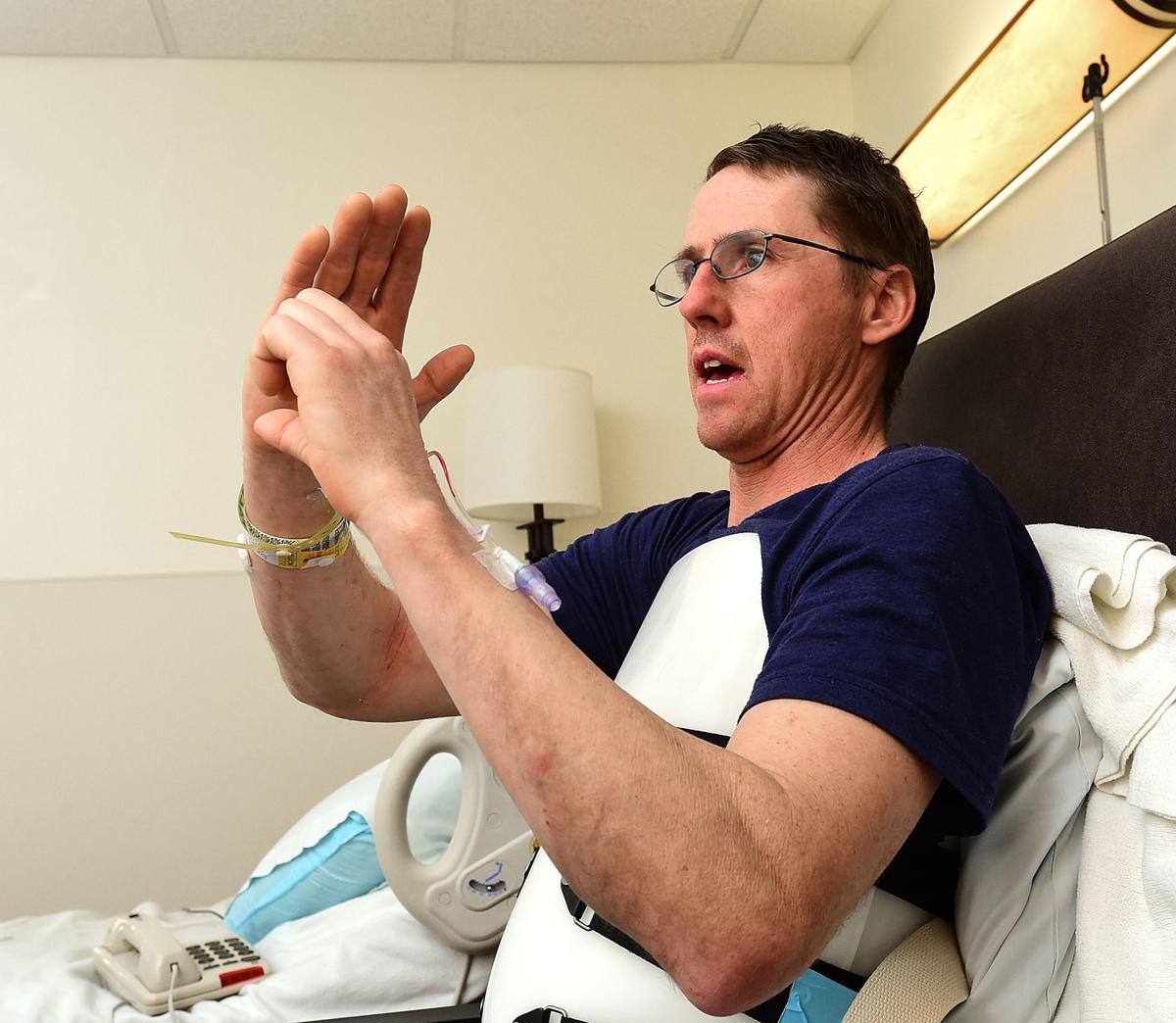 Ice climber Rick Dvorak describes his fall and rescue in Wyoming from his hospital room at the Billings Clinic. 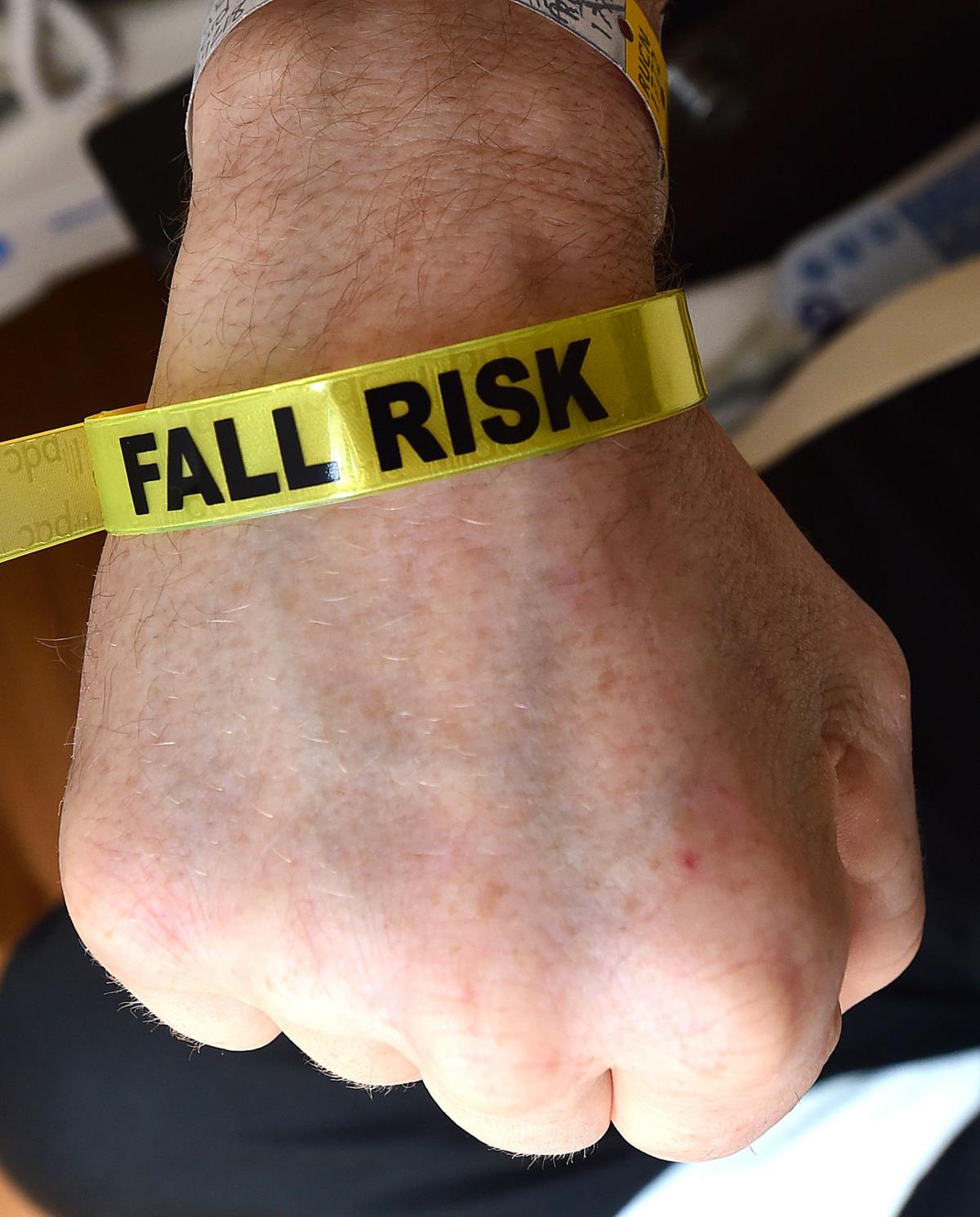 Ice climber Rick Dvorak jokes about his "Fall Risk" wristband from his hospital room at the Billings Clinic. The wristband alerts hospital workers to the possibility he could fall while recovering from a 30-foot ice climbing accident and rescue in Wyoming. 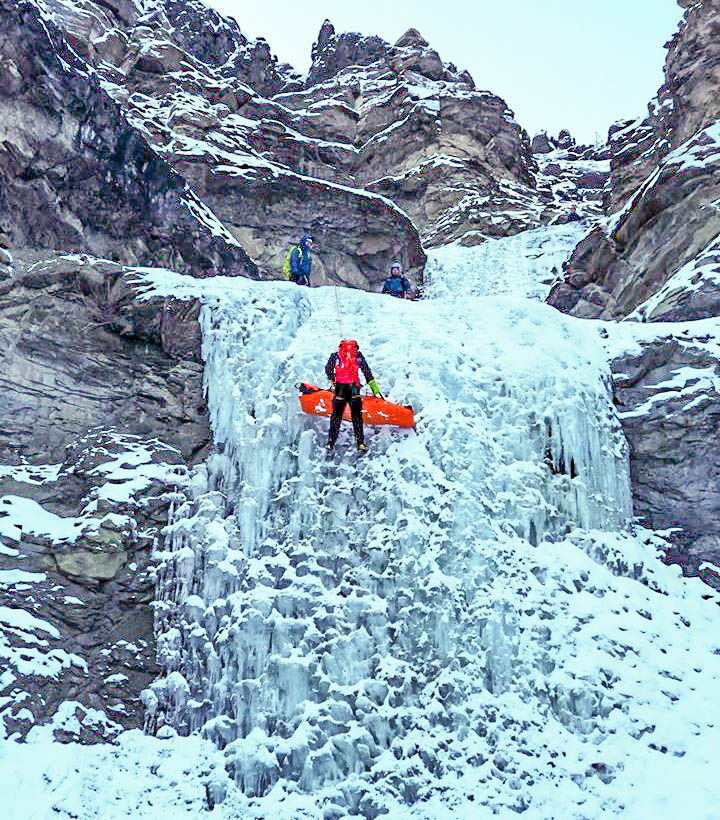 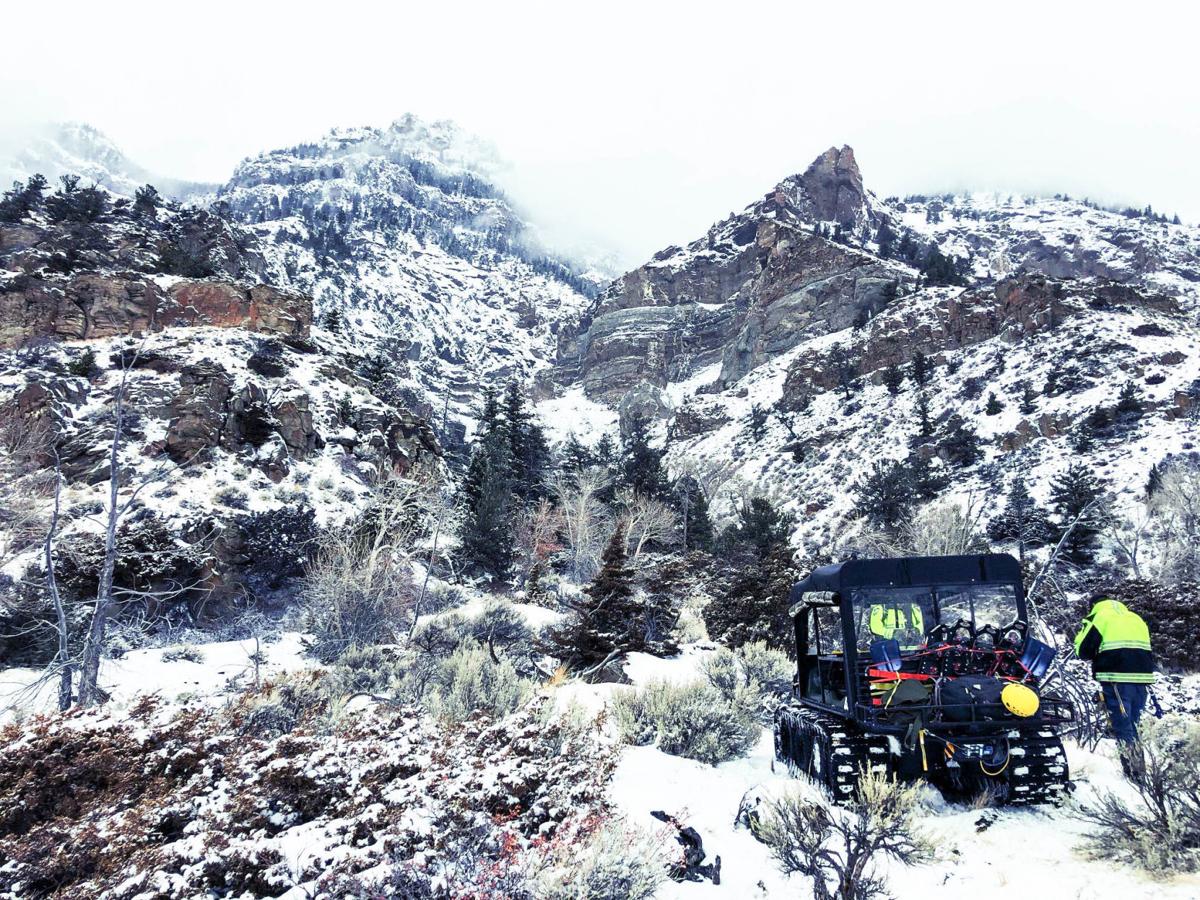 Rescuers in Park County, Wyoming, use an Argo tracked vehicle to get to within a half-mile of the base of a series of frozen waterfalls where a Billings climber had fallen and was severely injured. The rescue took at least nine hours. 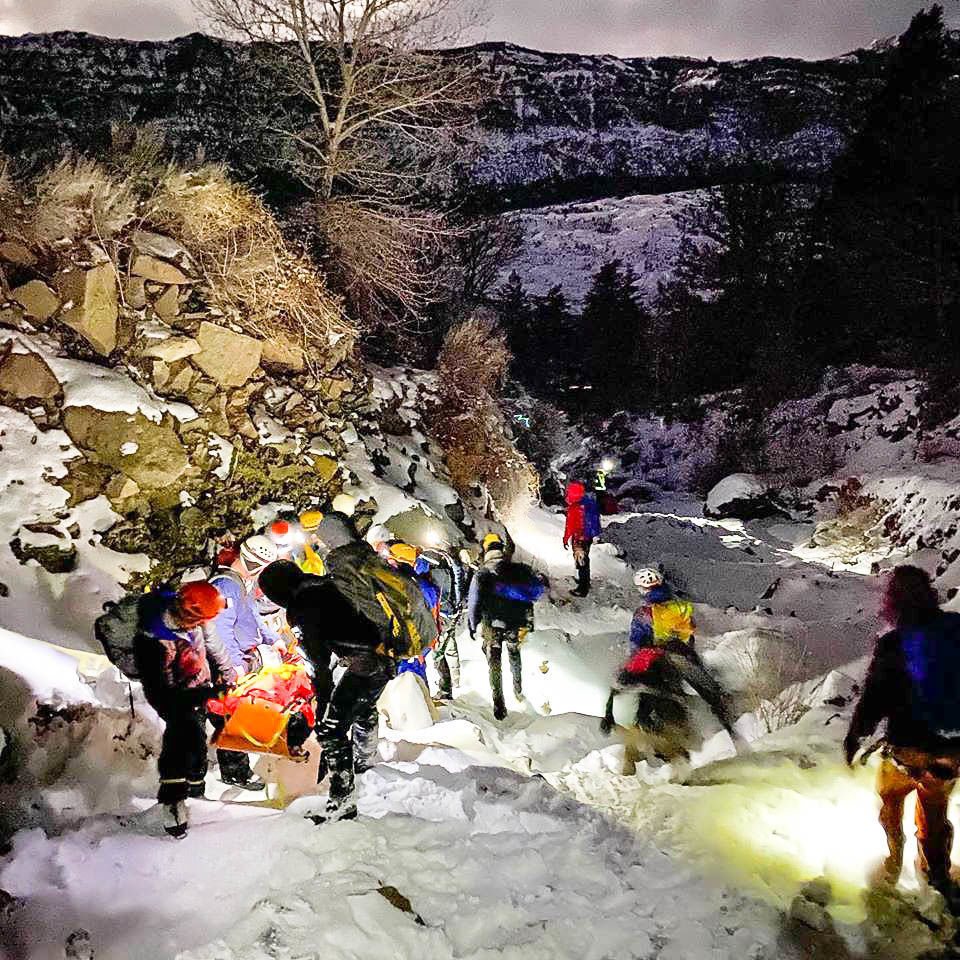 Specially trained rescuers and volunteers climb a series of frozen waterfalls to rescue a Billings climber who had fallen and was severely injured. The rescue took at least nine hours. 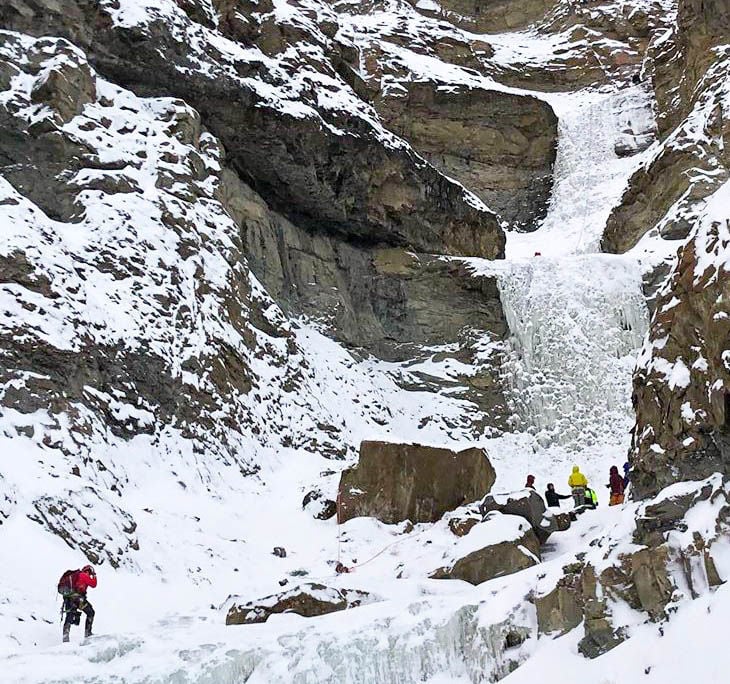 Specially trained rescuers climb a series of frozen waterfalls to rescue a Billings climber who had fallen and was severely injured. The rescue took at least nine hours.