POWELL, Wyo. — An Indiana man who illegally rappelled into the Grand Canyon of the Yellowstone this month before having to be rescued says he was searching for hidden treasure.

Dave Christensen, 55, is convinced the canyon holds the infamous Fenn treasure — a multimillion dollar cache of gold and jewels that Sante Fe art dealer and author Forrest Fenn insists he hid some time ago.

Christensen took a scouting trip into Yellowstone just after Christmas, and then after loading up on supplies back in Indiana he snowmobiled into the park on Jan. 6, the Powell Tribune reports.

Equipped with ropes, a harness, a helmet and other climbing gear, he tied off on a railing at a popular overlook and climbed down to the Yellowstone River — more than 850 feet below.

Park rangers and search and rescue personnel were called and took several hours to rescue Christensen, who is now facing misdemeanor charges for the incident.

However, the Winamac, Indiana, resident says his attempt was to save others who may be injured or perish in attempts to discover the “pot of gold.” He sought to make that case in an email to Yellowstone Superintendent Cam Sholly following the incident, laying out why he believes Fenn’s gold is in the canyon.

“I am not a quack, nor have blind lust for hidden treasures,” Christensen wrote. “I’m sending this so you can analyze the information, hopefully understand its validity, and thus, potentially circumvent a ‘Mad Mad World’ or ‘Rat Race’ of searchers in the near future.”

Blogger Dal Neitzel estimates that nearly 250,000 people have searched for the treasure. He’s written about the subject for the past five years, prompting many to ask him why he hasn't found the gold himself.

Fenn said the treasure is about 42 pounds of gold and jewels in an ornate, 10-inch by 10-inch Romanesque box. He was in his 70s when he hid the box, taking him two trips to carry the load to its hidey hole.

“Please be cautious and don’t take risks,” Fenn has said. “The search is supposed to be fun.”

However, at least four people have died looking for the treasure and several have required rescue, including in Park County.

A couple from Virginia, Madilina Taylor and boyfriend Frank Rose Jr., had to receive assistance from rescuers in 2013, 2015 and 2016 after trying to find Fenn’s fortune in the Wapiti area and Shoshone National Forest. Those misadventures included Taylor breaking her ankle in 2015, which required her to be airlifted. After another trip in July 2016 resulted in encounters with grizzly bears, Taylor reportedly told the sheriff’s office that “she was headed back East with no intentions of ever returning.”

Then in early June 2018, Jeff Murphy, a 53-year-old from Batavia, Illinois was searching for the treasure near Yellowstone’s Turkey Pen Peak when he accidentally stepped into a chute and fell to his death. A year earlier, Paris Wallace, a 52-year-old pastor from Grand Junction, Colorado, died while searching for the treasure in the Rio Grande Gorge in New Mexico. After the death, the New Mexico State Police asked Fenn to call off the search for the gold and jewels.

“If someone thinks the treasure is hidden in a dangerous location, they should not search for it. There is no percentage in taking risks,” Westword reported Fenn as saying at the time. The octogenarian Fenn then added a couple more clues, saying “the treasure chest is not under water, nor is it near the Rio Grande River. It is not necessary to move large rocks or climb up or down a steep precipice.”

“This is his [Fenn’s] life savings,” Christensen said. “He’s not going to put it where someone can stumble across it.”

Christensen framed his illegal drop into the Grand Canyon of the Yellowstone as an effort to ultimately help others.

“I had to do this. The story has to end,” he said. “Too many people are getting hurt and killed.”

The military veteran said he’s been working for months to “solve” the poetic riddle that Fenn published in 2010, which launched the search for his treasure.

Christensen made a “reconnaissance” trip by rented snowmobile to the canyon on Dec. 26, checking the logistics of getting to the spot where he suspects the treasure is hidden. Then he returned to Indiana to prepare and purchase needed equipment, including special clothing, climbing tools, 1,000 feet of climbing rope and bear spray. He also was outfitted with a Garmin transceiver in case of an avalanche.

Christensen returned to Yellowstone, rented another snowmobile near Pahaska Tepee, loaded it with all the supplies and entered the East Gate on a non-commercially guided snowmobile access permit.

“I knew it would be too hard to carry it out,” he said of the treasure. “I had my cellphone and I was going to take a picture to prove it was there and then move it.”

Christensen’s preparation and experience in the Army gave him the courage to take that first step over the edge of the overlook, he said.

Despite his planning, he admits he may have made a couple miscalculations.

Christensen later told search and rescue personnel and park rangers that he dropped his backpack and went off-rope to retrieve it. Then he slid down the canyon wall to the river.

Christensen said a friend, who he didn’t identify, was at the overlook and was supposed to help send down more rope when contacted to do so by two-way radio.

Rangers reported that after two hours of attempting to climb back up with his backpack, Christensen requested assistance.

He disputes the official report, saying that “I could have climbed out, but they wouldn’t authorize more rope.”

Christensen said he turned back from the treasure location after seeing possible bear tracks and hearing a loud moan or growl. He also heard rangers yelling at him.

“He was like a turtle on his back in that heavy snow,” said Gary Fales, owner of Gary Fales Outfitting and Snowmobile Tours in Wapiti, which had rented the sled to Christensen. “This guy was lucky he didn’t die.”

A team of rangers and 11 search and rescue members responded from throughout the park, eventually lowering an expert climber approximately 800 feet to Christensen.

It took more than four hours to bring Christensen to safety, with the team finishing the operation at about 8:30 p.m. in snow flurries and frigid temperatures. Christensen was taken to Mammoth and received two citations for creating a hazardous condition and off trail travel in a closed area.

He isn’t the first to be cited for going off trail in the canyon, said Klint Powell, incident commander and high angle technical rescues team member in Yellowstone.

Some cross-country skiers went into the canyon undetected, but were nabbed after the scofflaws bragged about their trip on social media.

Powell said he’s been involved in many rescues, but most of them involved accidents, not intentional acts.

“Seems like common sense to us here, but we get folks from all over the place and they don’t understand it’s a truly wild place,” he said.

The ranger, who has worked in Yellowstone 10 years and trained extensively for rescues in the mountainous park, said Christensen was a “novice” climber.

Terry Dolan, an experienced hunting and over-snow guide for Fales Outfitting and a Wapiti-area resident, happened to be leading a commercial trip to the canyon the day that Christensen made his descent.

Dolan took photographs of Christensen while he was “flailing” in the deep snow. Two days later, Christensen turned up at the Fales’ equipment drop-off. That’s when guide Dean Lavoy found out Christensen had been planning to search for Fenn’s gold all along.

Christensen will get another chance to enter the park before it officially opens for the summer season, when he heads to U.S. District Court in Mammoth on April 2 to answer to the citations. His search could cost him time in jail and thousands in fines if he’s found guilty. Christensen could also be banned from the park.

“If they ban me for five years, I’ll just have to wait to find the treasure,” he said.

An ice climber fell about 30 feet in Wyoming on Saturday and by Monday was recovering in his hospital room.

BOZEMAN — Montana hunters should be able to submit lymph glands for chronic wasting disease testing within the state by the next hunting season, officials said. 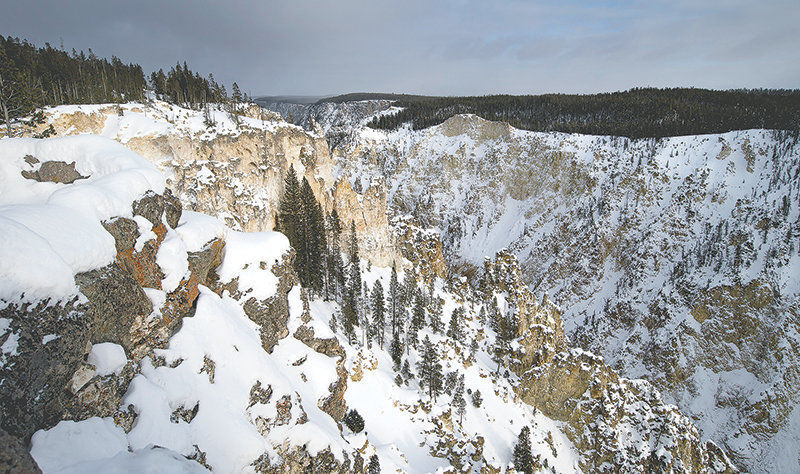 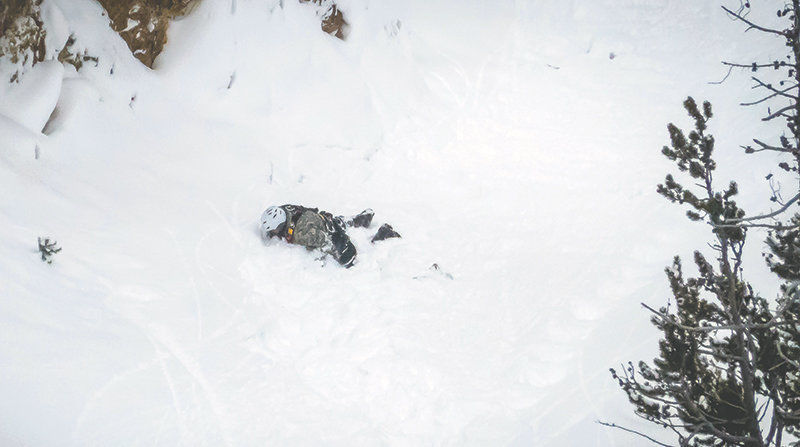 Indiana treasure hunter Dave Christensen is shown in the Grand Canyon of the Yellowstone River in Yellowstone National Park. The area is usually covered in snow in winter and is closed to tourists even during the summer months. Christensen was cited for climbing into the canyon on Jan. 6; rescuers were required to retrieve him during a snowstorm. 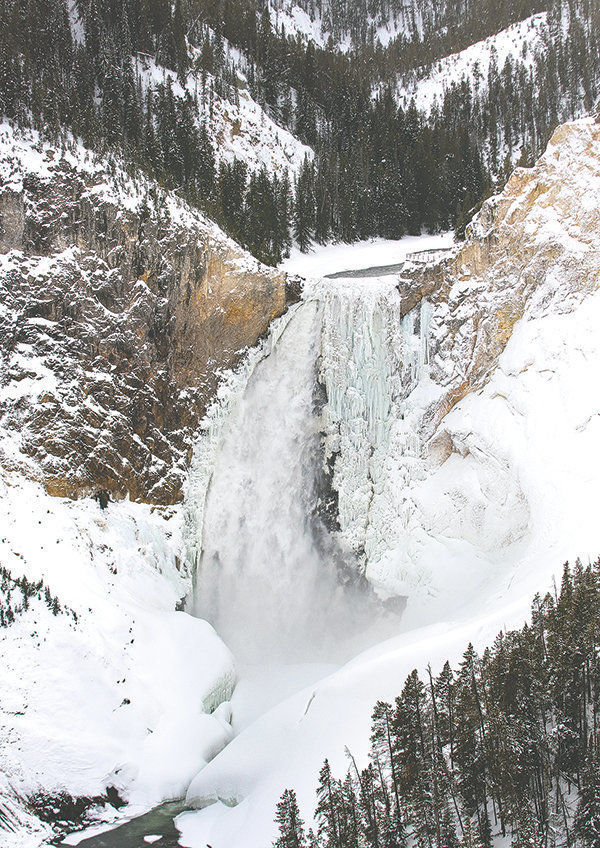 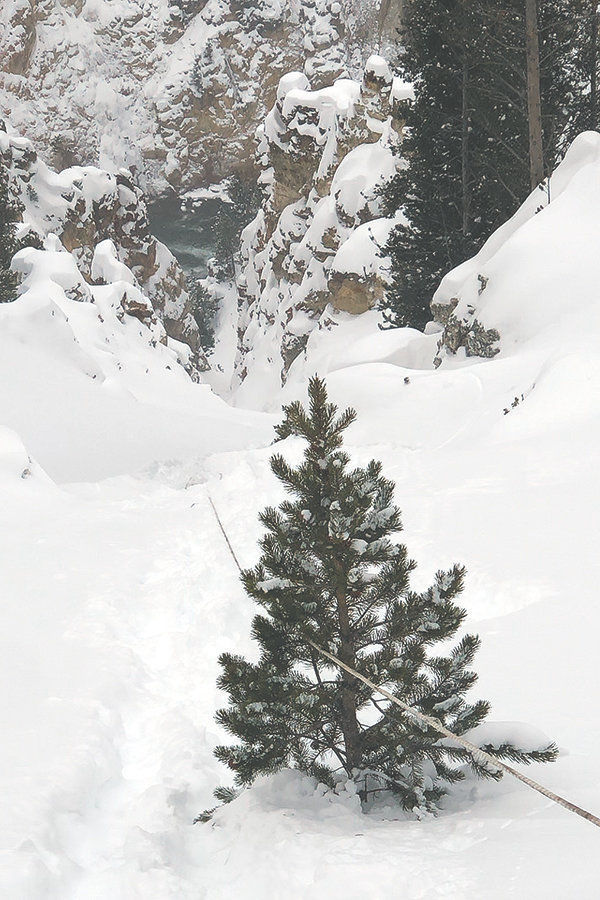 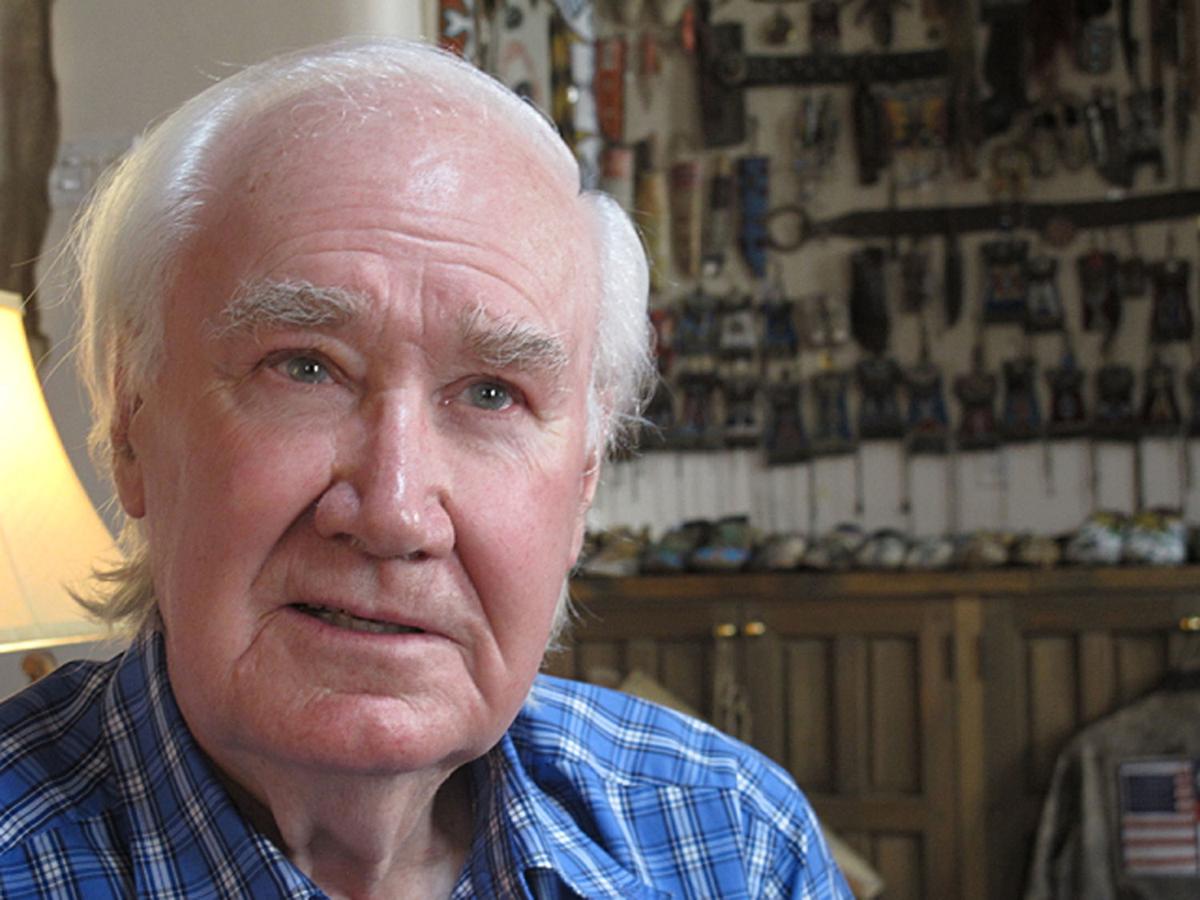 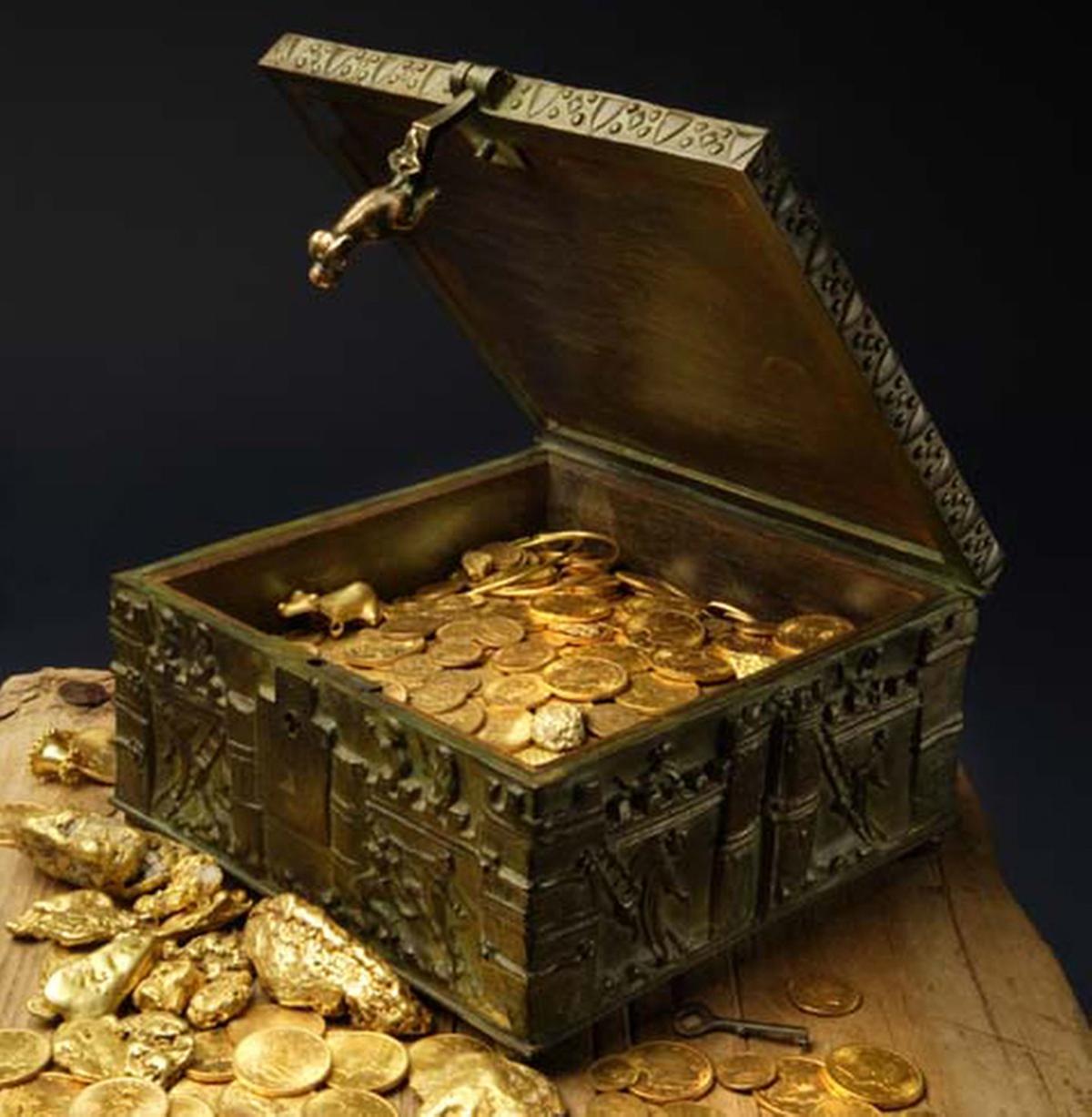 This undated photo provided by Forrest Fenn shows an estimated $2 million of gold jewelry and other artifacts that Fenn has hidden for treasure hunters to find. Thousands have set off into the wilds of the West in search for Forrest Fenn’s cache of gold, jewelry and artifacts.