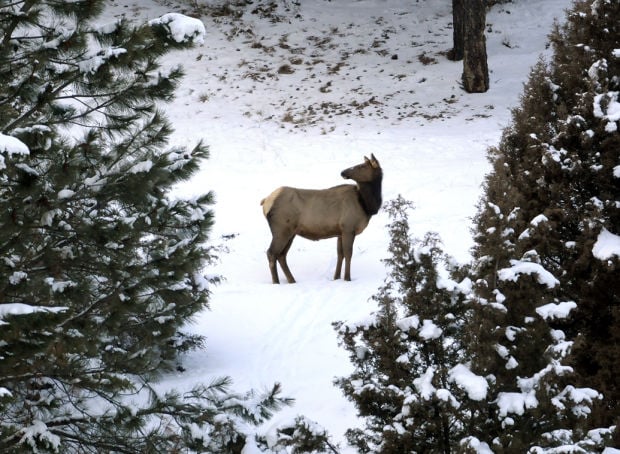 A cow elk pauses in the snow. In Montana, six different categories of elk hunting licenses are offered. 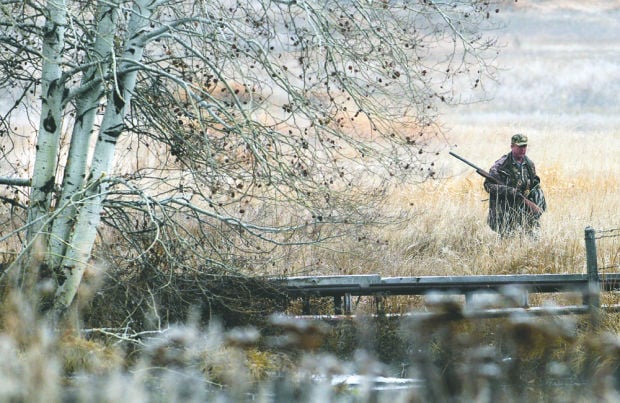 With nearly 100 types of state hunting and fishing licenses to choose from, the Licensing and Funding Advisory Council is looking for hunter input as they begin work on streamlining the licensing options.

For something as woodsy and mud-on-your-boots as hunting, there’s sure a lot of paperwork involved.

And with the 2013 big-game season over, Montana’s Licensing and Funding Advisory Council wants hunter input on pruning the state’s overgrown hunting license system.

“There are dozens of different kinds of carved-out licenses,” said council chairman Jeff Welborn, a state legislator from Dillon. “I’m as guilty as anybody in the Legislature for voting for all these ‘coming home to hunt’ or whatever the case may be programs. Now it’s a very complex system, with a lot of different demographic groups that get free or reduced licenses. We’ve been coming up with ways of doing things that makes it easier for John Q. Public. But all of that comes at a cost to somebody or something.”

Of the state Department of Fish, Wildlife and Parks’ annual $89 million budget, about two-thirds comes from the sale of hunting and fishing licenses. And there are nearly 100 of those, from youth and senior-citizen discounts to non-resident/three-day fishing permits.

Out-of-state hunters have a complex set of options for combination big-game licenses for about $1,000, while residents can get volume discounts on a “sportsman’s package” that covers everything from the state land access fee to the black bear tag for $85 (unless you’re certified military, in which case it’s $2). Elk hunters choose among general, disabled, 62+senior, 12-14 youth, antlerless lottery drawing, antlerless over-the-counter, and general lottery drawing.

But the underlying license fee system gets reviewed every 10 years. The last major resident fee change was in 2005. The 2013 Legislature and Gov. Steve Bullock together ordered an overhaul, which the council is doing. Its next public meeting is

Dec. 11 in Helena, and it will report its findings to FWP director Jeff Hagener in March.

Meanwhile, the Legislature’s Environmental Quality Council has also started a public comment process aimed at streamlining the license and regulation system. That body meets on Jan. 8 in Helena.

The recommendations should be packaged for public review next April. After a series of statewide public meetings on the ideas, a final version will be worked into FWP’s budget and funding presentation to the 2015 Legislature.

Among the options on the table:

• Standardizing the more than 30 free or discounted hunting and fishing license options.

• Changing the review cycle from the current 10 years to something shorter, or giving the FWP Board of Commissioners more latitude to make fee changes in mid-decade.

“There’s a lot of people who think the residents need to pay more for licenses,” said council member Tim Aldrich of Missoula. “We haven’t put numbers on it, but we’ve looked at surrounding states, and asked what if we applied a CPI (Consumer Price Index) factor every year. The rubber will hit the road as we look at specific ways to change that revenue. But right now, point blank, there haven’t been any hard decisions made.”

Tinkering with license revenue has several outcomes. FWP is somewhat unique among Montana state agencies in how its specific clientele – hunters and anglers – provide the bulk of its funding, with little help from the state’s general fund.

That independence has often aggravated legislators who disagree with departmental policies – most recently its efforts to acquire more public land for wildlife habitat. The result has been frequent attempts to earmark or restrain the agency’s spending powers, further complicating the budgeting process.

License policy can also affect the outdoor recreation market. Many of the license options aim to encourage specific groups to hunt or fish, such as returning military veterans, youth or people with Montana family ties. Price scales get compared with other states, both resident and nonresident, as people consider where to spend vacation time or even set up residence.

“We’re at the low end on prices compared to what’s going on around us,” Aldrich said of the state-to-state pricing. “We’re wanting to be competitive, but we don’t want to blow ourselves out of the water.”

The public can comment on license and permitting changes via the agency’s website, fwp.mt.gov, through the “Licensing and Funding Advisory Council” button.

Study: Americans don't feel like adults even if they are

Study: Americans don't feel like adults even if they are

Possible changes to Montana’s hunting and fishing license fees, including a base license for all rifle and archery licenses, could boost the F…

LIBBY – As Michael Wagner of Libby pleaded not guilty in Lincoln County Justice Court this week to three misdemeanors, including negligent end…

Through Dec. 20, Montanans can weigh in on proposed rule changes that will give landowners more latitude in killing a wolf that threatens thei…

Pouring rain on the last day of the 2013 hunting season didn’t keep the determined from filling their freezers this year.

A cow elk pauses in the snow. In Montana, six different categories of elk hunting licenses are offered.

With nearly 100 types of state hunting and fishing licenses to choose from, the Licensing and Funding Advisory Council is looking for hunter input as they begin work on streamlining the licensing options.