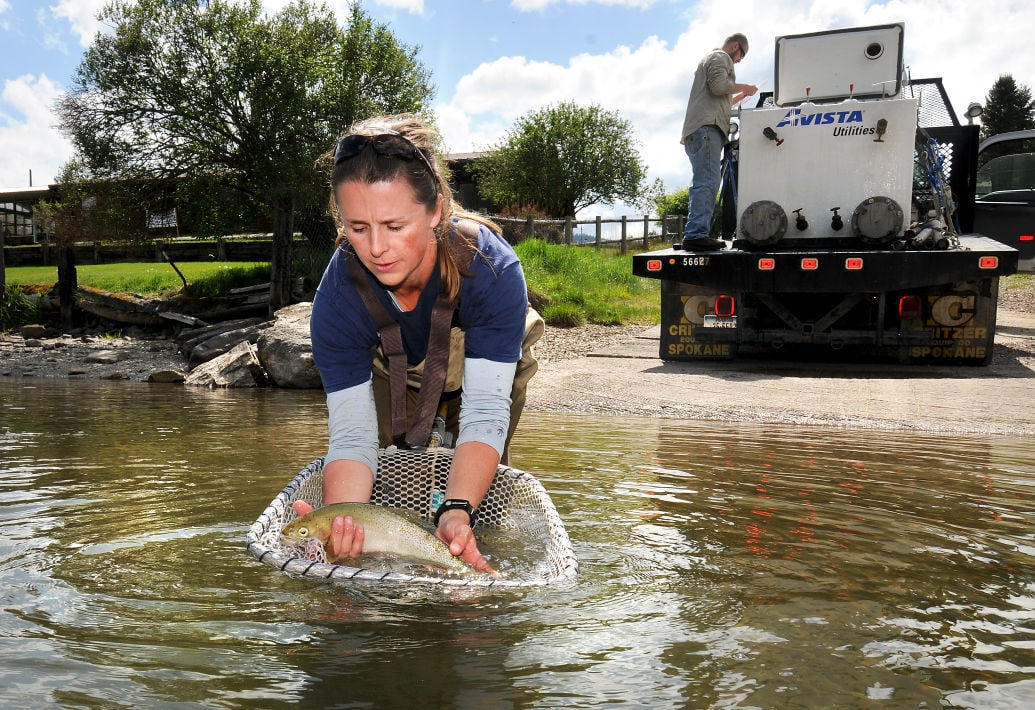 Shana Bernall, a research biologist with Avista Corp., releases a cutthroat trout into Noxon Reservoir above the Cabinet Gorge Dam last week after a short truck ride from a holding facility below the dam. 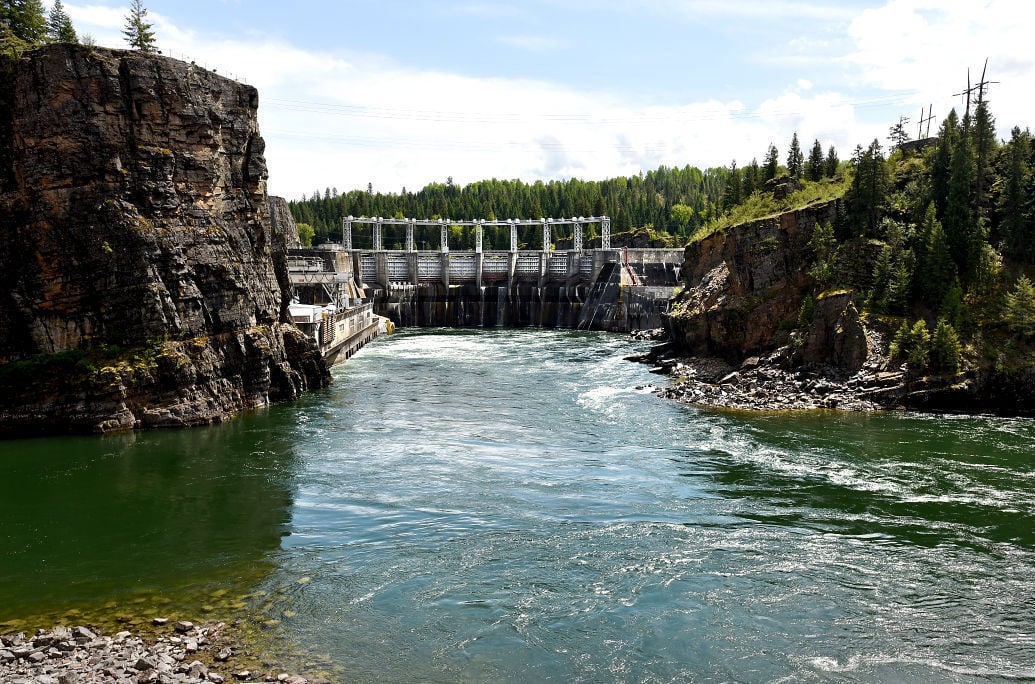 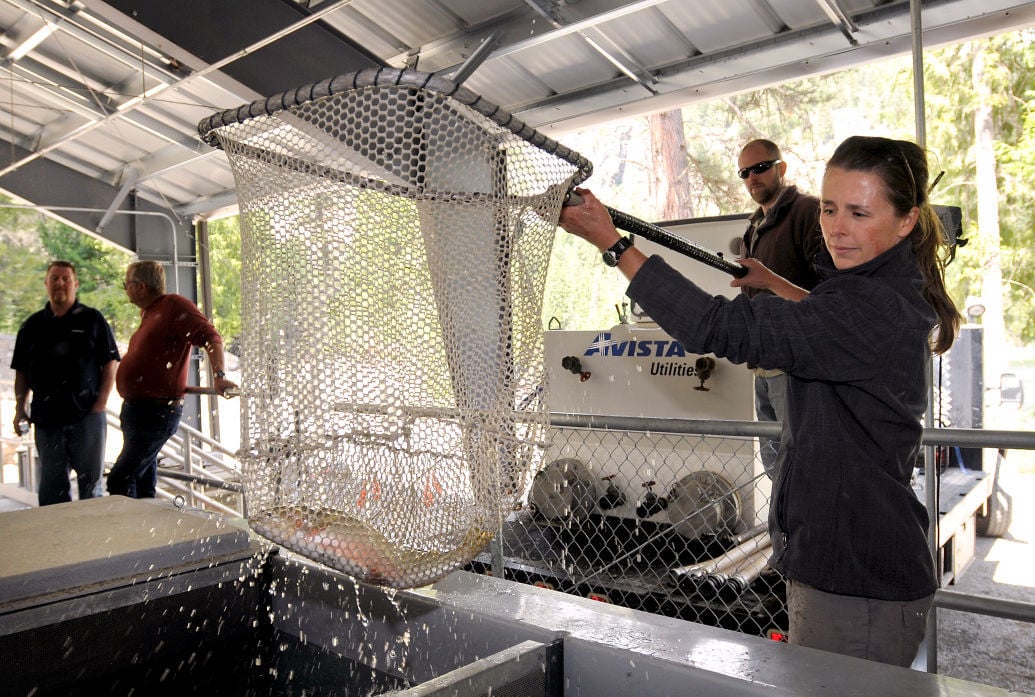 Bernall nets trout from a tank at Avista’s new holding facility downstream from the Cabinet Gorge Dam. The fish will be moved to various places above the dam depending on whether it’s a cutthroat or a bull trout.

CABINET, Idaho – Like any immigration story, this one has a border with a big wall and a population that wants desperately to move from one side to the other. Some enjoy privileged passage. Others are viewed with suspicion. Lots of government agencies are involved.

When a bull trout reaches the Idaho-Montana border at Cabinet Gorge Dam, biologists at a new $2 million facility give it a quick DNA test, followed by a truck ride to the tributary stream of its birth. Last Thursday, one bull trout got a 40-mile ride to the Vermillion River east of Trout Creek.

When a cutthroat trout shows up, it gets checked for numerous diseases and then placed in a holding pen. A clean bill of health entitles it to a five-mile ride to Montana's Noxon Reservoir, between Cabinet Gorge and Noxon Rapids dams, but no farther.

What seems harsh actually has some solid biology and policy behind it.

Washington-based Avista Corp. worked out an agreement with 26 state, federal and private agencies to restore natural functions of the lower Clark Fork River. The settlement corrals about $10 million worth of work, ranging from conservation easements on spawning streams to the fish-handling facility and soon a new fish ladder at Cabinet Gorge Dam.

The bull trout lives a remarkable life. Like an inland salmon, it hatches in tiny mountain streams, grows to maturity in big lakes like Pend Oreille and Flathead, and then swims hundreds of miles back to its original spawning stream to lay a new generation of eggs. Pollute the lake, log the stream drainage or dam the river and that life cycle snaps.

“At the time, nobody thought the dams would have a significant impact on the fishery,” said Tim Swant, Avista’s Clark Fork River license manager. “And bulls weren’t considered a good fish anyway.”

Anglers in the early 20th century often complained that bull trout ate too many young salmon and steelhead, and didn’t taste or fight as good as rainbow trout.

Its complex habitat needs didn’t help preservation either. Finally, sitting like a grizzly bear at the top of the piscatorial food chain, there weren’t that many bulls to begin with.

The original 1952 Cabinet Gorge federal dam license included provisions to maintain a kokanee salmon fishery in the Clark Fork, but didn’t consider bull or cutthroat trout as needing attention. In the following decades, the big fish began to disappear.

The bull trout qualified as a threatened fish under the federal Endangered Species Act in 1998. Avista started studying bull trout movements in 2000. It took four years to discover the difference between a bull coming from Idaho’s Lake Pend Oreille and one from Montana’s Flathead Lake.

Perhaps the only good thing about being a small, threatened population is it’s a lot easier to study.

More than nine out of 10 bull trout insist on returning to their native streams to spawn, while more promiscuous cutthroat aren’t so picky. So it’s possible to clip a bit of fin from a bull trout at the Cabinet Gorge facility, express-mail the sample to a lab, and pin down its natal stream in less than 24 hours.

On the other hand, cutthroats can cross-breed with non-native rainbow trout, which Montana wildlife officials don’t want. And nobody wants to accidentally move a water-borne disease into new territory.

“We have a pretty good health record, especially compared to surrounding states,” said Montana Fish, Wildlife and Parks Lower Clark Fork fisheries manager Ryan Kreiner. “Take something like IPN – infectious pancreatic necrosis. We know for a fact that exists downstream of Cabinet Gorge Dam. It’s a virus, and in the wild, fish can tolerate it somewhat. But if it got into a hatchery system, it can basically shut down a hatchery. That happened in Idaho’s Spring Creek Hatchery, which now has been shut down for 20 or 30 years. They couldn’t clean it out of the water system.”

Kreiner said the rule isn’t only a border issue. FWP has the same requirements when moving trout from drainage to drainage within Montana.

“We’ve been trying to pass cutthroat since 2006,” Avista biologist Shana Bernall said. “Montana considers this importation of wildlife. It took an amendment to state law to let us bring back native fish.”

Currently, Avista staff electro-fish a short reach of the Clark Fork below Cabinet Gorge Dam and bring any bulls and cutthroat to the holding facility.

This summer, work will start on a fish ladder that climbs about halfway up the dam. Workers will sort the fish at the top, trucking the trout a mile back downstream to the facility and returning the other 30-odd species to Idaho.

At the facility, bull trout will get their DNA test and traveling permits, while cutthroats go through their health and purity checkups and potentially a short ride to Noxon Reservoir. Even that opens some new opportunities for the cutts – one radio-tagged trout was found 20 miles up the Bull River shortly after release.

Four big cutthroats were in the Avista facility last Thursday with the lone 7-pound bull trout, waiting for rides. When everything gets in place, the numbers could climb to 200 or 300 cutthroats a year, along with an average 35 bull trout.

That may seem an incredible expense for three-dozen fish. But U.S. Fish and Wildlife Service biologist Wade Fredenberg said it makes sense when you consider the biology of bull trout.

“Each female carries 5,000 to 10,000 eggs,” Fredenberg said. “For many systems upstream, like the Thompson River or the Jocko River or Rock Creek, that kind of production makes a substantial contribution to whether or not bull trout persist in certain drainages.

“We’re not concerned if we still have bull trout in Lake Pend Oreille – we estimate there’s about 10,000 in there. But look at it from the other end of the funnel. Where those fish are headed, 35 fish might double the population. That’s much more significant, and that’s the end we’re trying to focus on. If we can get a couple hundred juveniles to come back out of the system, that’s a huge difference.”

To watch a video of bull trout passage at Cabinet Gorge Dam, go online to this story.

Lower your cholesterol by eating these foods

Lower your cholesterol by eating these foods

These everyday items are about to get more expensive

These everyday items are about to get more expensive

You should buy these items at yard sales

You should buy these items at yard sales

POLSON – To the number of omens that this year is shaping up as an unusual one, add this:

The draft master plan for removing bull trout from Endangered Species Act protection was released at 12:01 a.m. Tuesday, after 16 years of wor…

John D. Ryan came back from Thompson Falls in the summer of 1915 with a glowing report.

CABINET, Idaho – Alongside the overlook of Cabinet Gorge Dam sits a rusty hunk of steel that looks like it once propelled an ocean liner.

Memorial Day weekend should offer some good fishing opportunities for families on lakes and rivers across Montana.

Local anglers have contributed $34,000 for fishery projects around western Montana this spring.

THOMPSON FALLS – A bigger, better Family Fishing Pond here is in the works.

Tour the installation of a new power turbine at Cabinet Gorge Dam.

Shana Bernall, a research biologist with Avista Corp., releases a cutthroat trout into Noxon Reservoir above the Cabinet Gorge Dam last week after a short truck ride from a holding facility below the dam.

Bernall nets trout from a tank at Avista’s new holding facility downstream from the Cabinet Gorge Dam. The fish will be moved to various places above the dam depending on whether it’s a cutthroat or a bull trout.