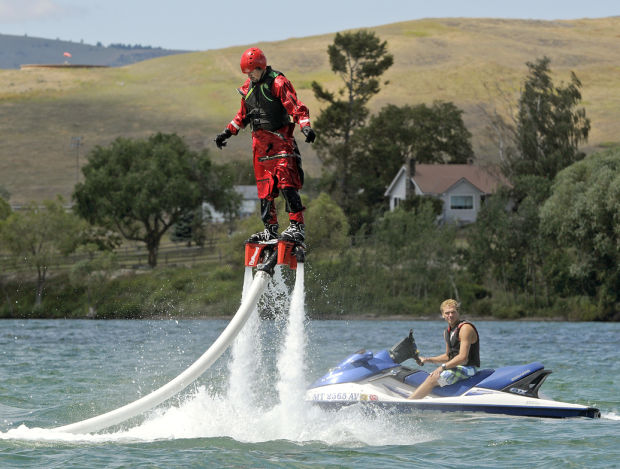 Reporter David Erickson rockets out of Flathead Lake while learning to “flyboard” with instructor Trae Fouty running the propulsion from a personal watercraft behind recently in Polson. Flyboarding allows riders to fly through the air and perform all manner of maneuvers using the force of water shot through a firehose. 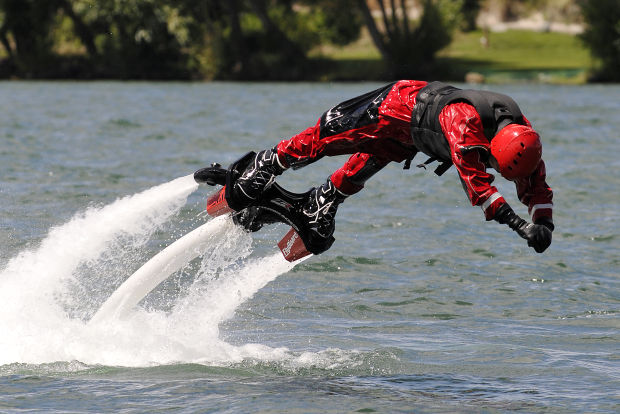 Erickson tries a dolphin dive, where the flyboarder dives underwater and resurfaces out of the water again. 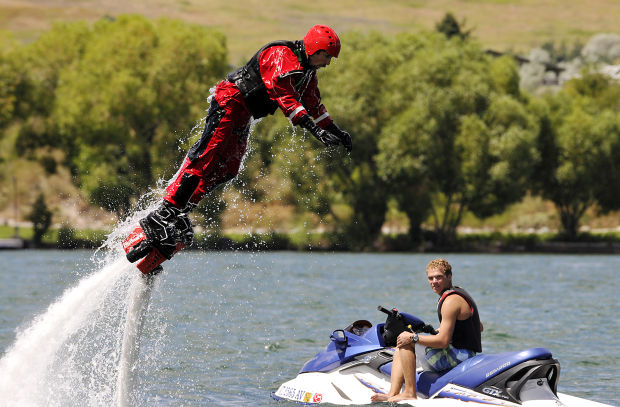 Erickson comes out of the water at an angle while learning to flyboard. Foot and toe position are apparently crucial to getting it right. 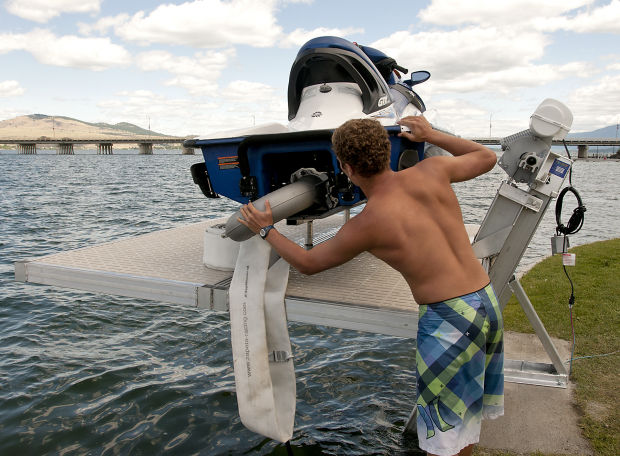 Fouty attaches a housing and firehose to the propulsion system of a personal watercraft. The watercraft provides the thrust that powers the system. 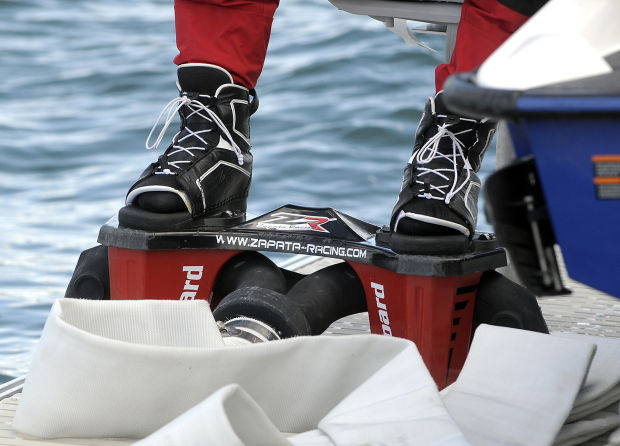 The end of the firehose is attached to a platform with two exit ports on the bottom and wakeboard bindings on the top.

POLSON – I finally realized the full scope of what I’d gotten myself into about the time I began launching off the surface of Flathead Lake like a ballistic missile, a hissing jet of water propelling me into the air.

The few words flashing through my mind at that moment are unprintable here.

Going into it, I was never quite clear exactly what “flyboarding” involved, and neither was anybody else I talked to. My colleague Rob Chaney said as far as he could tell, it meant “riding a rocket hose.” That turned out to be pretty accurate.

All I knew was that Internet videos of flyboarding looked epic, and it didn’t seem like something sane people would do voluntarily. So I figured I would give it a shot.

I called up Trae Fouty at Riverside Boat Rentals in Polson to give me a lesson. Fouty, 22, earned his instructor certificate by completing 20 hours of practice with a company called Flyboard of Montana on Whitefish Lake.

A flyboard is basically a water-powered jetpack that is strapped to your feet with wakeboard bindings. A firehose connected below your feet runs to a pump on the back of a personal watercraft. When the throttle on the watercraft is revved, water is forced through the hose and out two nozzles under your feet, providing enough thrust to propel you 40 feet into the air or dive headlong into the water. The only way to control your direction is through foot and body movements.

“It’s an extreme sport,” Fouty said, grinning as he handed me my helmet and drysuit.

Even though the water temperature felt fine at first, I would be spending a half hour in the lake, so the drysuit came in handy.

Fouty had me strap on the bindings at the dock, and he got on the watercraft. My first goal was to float on my stomach, hands at my sides, while Fouty gave me just enough power to taxi to deeper water. It felt like stomach-surfing, and I steered by leaning to one side or the other.

When we were a safe distance from shore, the lesson began.

Fouty told me that when he really started sending water through the hose, I was supposed to point my toes down to get the flyboard underneath me. When I was positioned at a right angle to the surface of the lake, I was supposed to rock back on my heels and get ready.

That’s when the real fun began.

“Going up!” Fouty shouted at me, revving the motor.

I kept my legs straight, as Fouty had instructed, while he gunned the engine. I felt the force of the water below me quickly build. Within a few seconds, my entire body shot straight out of the lake and it looked like I was standing on the surface. Then the roiling jet beneath me pushed me up another 10 feet or so.

The surge of adrenaline I felt was not dissimilar to that feeling you get at the crest of a rollercoaster, when you know you are about to drop over the other side and your stomach feels like it’s floating. My mind didn’t really believe what my eyes and legs were saying was happening: I was hovering.

I looked down at Fouty on the watercraft below, and he appeared to be smiling and making hand gestures for which direction he wanted me to go. He had told me to make sure I always positioned myself on the side of the watercraft to make sure I wouldn’t shoot water at him. His job was to cut my thrust if I ever pointed myself in the wrong direction.

I tried to overcorrect, and after about 60 seconds, I leaned too far back and smacked into the water. It didn’t hurt, surprisingly.

“Try to spin yourself around to your stomach before you fall backward,” Fouty explained. “That way, you’ll go right back up.”

Staying balanced turned out to be a lot easier after a few more tries. If you relax and don’t try to make sudden motions, you can hover and enjoy a bird’s-eye view of the lake.

But Fouty wanted me to try some tricks.

“We’ll go out a little deeper and you can try 180 spins and dolphin dives and a Superman,” he said.

I spent the next half hour either hovering above the water, diving into it – sometimes on purpose – or falling at awkward angles when I failed to execute a move properly.

The dolphin dives involve aiming yourself at the water at a perfect angle, shooting down for a few feet, then turning up to the surface, popping up and diving back again. If you dive at an angle that’s too shallow, you’ll belly-flop. If you dive too deeply, you’ll shoot straight down and not be able to turn back toward the surface easily.

On my first attempt, I did the former, and on my second attempt, I did the latter. By the third try, though, I’m pretty sure I imitated a dolphin about as well as a human strapped to a rocket hose can. It wasn’t a textbook maneuver, but I dove at a 45-degree angle, surged into the greenish-blue water about 3 feet deep, then angled back up and popped into the sun for another dive.

There aren’t many sports like flyboarding. It is ridiculously fun, and it gives you a feeling that must be as close to the Holy Grail of science-fiction sports – hoverboarding – as you can get with current technology.

The Superman move involves leaning back on your heels until you almost fall backward, then pitching yourself forward to stall out and rocket back up. I never really got the hang of it. Spinning was easier – it involves bending one knee, looking back in the direction you want to go and throwing your weight around. You don’t have to be overly strong to move around, but balance and coordination come into play.

Fouty has learned how to do backflips and sideways flips and all manner of twists and loops.

Many of the moves you have to perform on a flyboard don’t seem logical – your brain is telling you they will cause you to fall a great distance. But the sport itself is somewhat illogical. It was invented in 2011 by a French man named Franky Zapata, who now holds the patent for the technology.

Riding a flyboard isn’t cheap because of the fuel involved. A half-hour lesson is $150, and a full hour costs $250. You can split the cost if you get eight people together for a four-hour lesson, which is $750.

Fouty said it isn’t hard to convince people to try it. In the hour we spent chatting, three or four people wandered down to the dock to ask just what in the heck they were seeing.

Now, I have a better idea of the answer, but it still doesn’t seem any saner.

Reporter David Erickson can be reached at david.erickson@missoulian.com.

Have you ever seen a Taj Mahal haircut?

10 features people look for when buying a car

10 features people look for when buying a car

Why Americans are changing their home decor

Why Americans are changing their home decor

RONAN – You can drive and boat for days to reach the famous White Cliffs of the Missouri River, or you can find similar beauty hidden in a bac…

Surfing Brennan's Wave not as easy as it appears from bridge

It’s going on late afternoon when Cam Fuller leads the way down to the Clark Fork River, his bare feet somehow resistant to the blistering bla…

Reporter David Erickson rockets out of Flathead Lake while learning to “flyboard” with instructor Trae Fouty running the propulsion from a personal watercraft behind recently in Polson. Flyboarding allows riders to fly through the air and perform all manner of maneuvers using the force of water shot through a firehose.

Erickson tries a dolphin dive, where the flyboarder dives underwater and resurfaces out of the water again.

Erickson comes out of the water at an angle while learning to flyboard. Foot and toe position are apparently crucial to getting it right.

Fouty attaches a housing and firehose to the propulsion system of a personal watercraft. The watercraft provides the thrust that powers the system.

The end of the firehose is attached to a platform with two exit ports on the bottom and wakeboard bindings on the top.