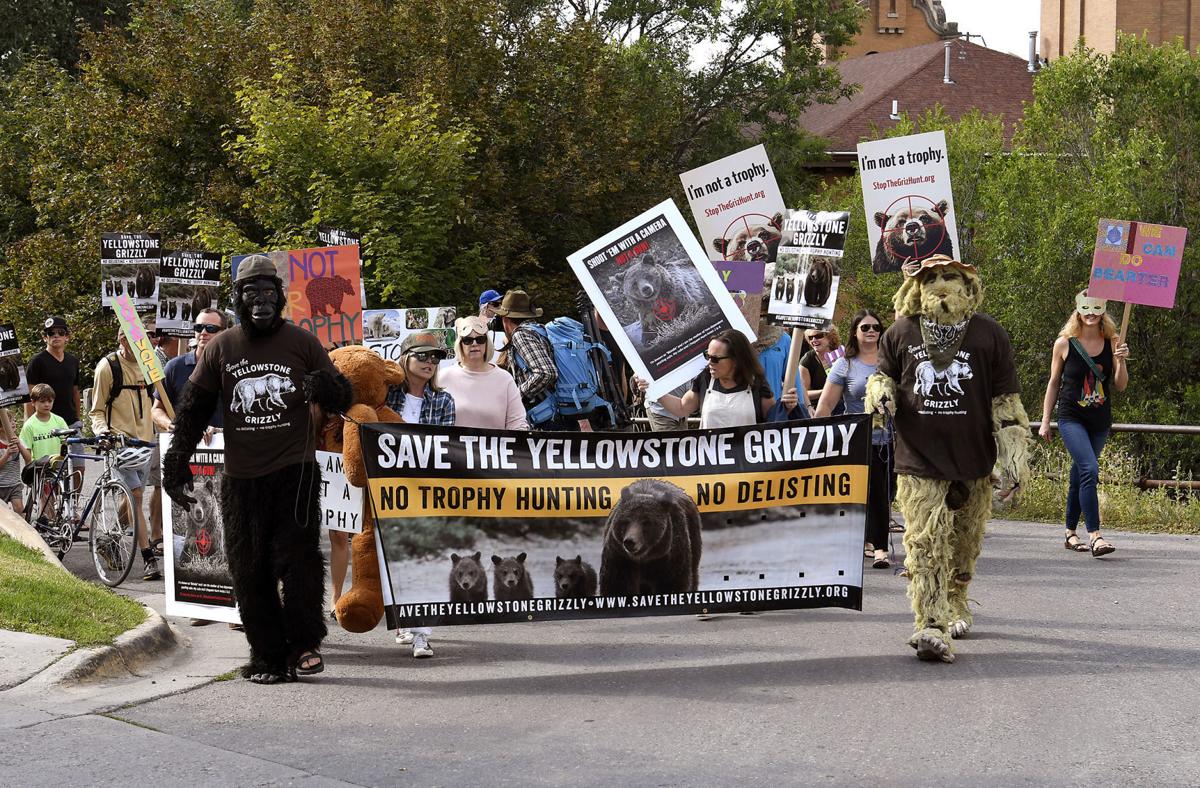 Opponents of delisting grizzly bears in the Greater Yellowstone Ecosystem and allowing grizzly big-game hunts march through Missoula on Tuesday. The protest comes ahead of Thursday's federal court hearing on removing grizzlies from the Endangered Species List and allowing Wyoming and Idaho to start hunting the bears on Sept. 1. 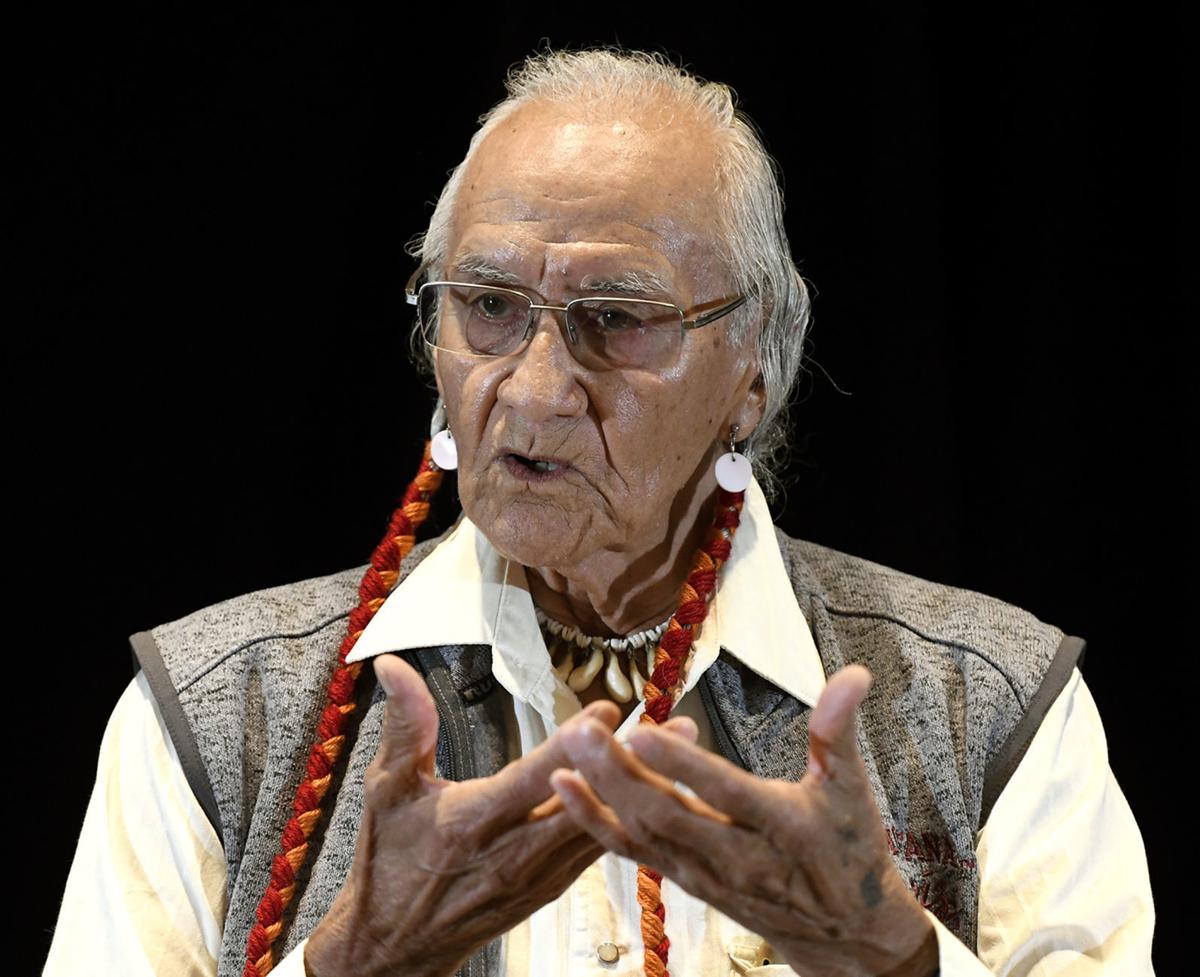 Johnny Arlee, a spiritual elder of the Confederated Salish and Kootenai Tribes, speaks at a press conference on Tuesday in Missoula. "What's really behind this is the dollars," Arlee said of the planned grizzly bear hunts.

Two days ahead of a major court date, backers of keeping grizzly bears on the Endangered Species List rolled out science, tradition and money to make their case.

On Tuesday afternoon, nearly three dozen demonstrators also marched from the grizzly bear statue in front of the Boone and Crockett Club headquarters to the Roxy Theater. There they listened to bear researcher David Mattson detail his latest bear ecology studies before watching documentaries of grizzly advocate Doug Peacock and other wildlife campaigners.

The activity presaged Thursday’s federal court hearing on delisting grizzlies in the Greater Yellowstone Ecosystem encompassing parts of Montana, Wyoming and Idaho. The docket combines six separate lawsuits against the U.S. Fish and Wildlife Service and features a buffet of intervenors supporting and opposing the delisting decision.

But the practical outcome narrows down to one thing: Can Wyoming and Idaho start their scheduled grizzly big-game hunts on September 1 or not?

“We’re in danger of turning the grizzly bear into a trophy. Why?” asked Johnny Arlee, a spiritual elder of the Confederated Salish and Kootenai Tribes. “We don’t eat the meat. So where does the carcass go? It’s just the hide and head and claws mounted some place to look at. What’s really behind this is the dollars.”

In mid-2017, FWS declared the approximately 750 grizzly bears in the Greater Yellowstone Ecosystem a recovered population and turned management of them over to the surrounding state wildlife agencies.

But another lawsuit involving delisting gray wolves in the western Great Lakes Region rejected the federal agency’s decision-making process that same summer. The decision keyed on the whether segments of a larger population can be delisted without analyzing how that might affect other still-threatened segments.

Grizzly bears in the lower 48 states have six recovery zones. In addition to the Greater Yellowstone, about 1,000 bears inhabit the Northern Continental Divide Ecosystem between Glacier National Park and Missoula. About 50 or 60 bears are believed to be in the Cabinet-Yaak Ecosystem of northwestern Montana and the Selkirk Ecosystem in northern Idaho. The North Cascades and Bitterroot Mountains ecosystems both have no confirmed resident grizzlies, but are designated recovery areas suitable for grizzly occupation.

Thursday’s court case only involves the Yellowstone delisting, although its results likely will color delisting efforts in the other recovery areas. The NCDE bears may be delisted this winter, according to federal officials.

Mattson said the Fish and Wildlife Service has ignored major changes in grizzly country since it developed a strategy for keeping bear populations healthy in 2016.

“That recovery plan that dictated the terms hasn’t been revised since 1993,” Mattson said. “You could make a book of relevant science that’s appeared since 1992.”

In particular, Mattson argued that grizzly populations in the Greater Yellowstone Ecosystem have gone from rising to flat, with no increases in population in the past 15 years. At the same time, the area has recorded increased numbers of grizzlies killed in human conflicts, particularly over livestock or hunting carcasses.

Interagency Grizzly Bear Committee population studies maintain the area has reached carrying capacity and bears are exploring new country far from the core habitat of the national park and surrounding wilderness. That stabilization of population numbers was a major indicator that the area was recovered.

Tuesday’s protest gathering took place underneath a statue of a grizzly bear outside the Boone and Crockett Club headquarters. The organization curates hunting trophy records of big game animals throughout the world. Boone and Crockett marketing director Keith Balfourd noted the club installed the statue to honor the grizzly bear.

“Dragging the Endangered Species Act into a hunting ethics issue is dragging it into the mud. It’s missing the whole point,” Balfourd said. “The point is wildlife management has to be in concert with other wildlife, at levels society is willing to accept. When game departments aren’t allowed to do that, it just creates problems whether you believe in hunting or not.”

Thursday’s grizzly bear hearing in Missoula may have much faster impacts than a typical federal court case.

What you need to know to stay safe in bear country

Chances are if you recreate in Montana you've shared the place with bears. Watching bears in their natural environment from a safe, respectabl…

Exploration work approved for Montana mine ensnared in legal disputes

BILLINGS — U.S. officials on Tuesday announced approval of the first phase of a silver and copper mine beneath a northwestern Montana wilderne…

Opponents of delisting grizzly bears in the Greater Yellowstone Ecosystem and allowing grizzly big-game hunts march through Missoula on Tuesday. The protest comes ahead of Thursday's federal court hearing on removing grizzlies from the Endangered Species List and allowing Wyoming and Idaho to start hunting the bears on Sept. 1.

Johnny Arlee, a spiritual elder of the Confederated Salish and Kootenai Tribes, speaks at a press conference on Tuesday in Missoula. "What's really behind this is the dollars," Arlee said of the planned grizzly bear hunts.