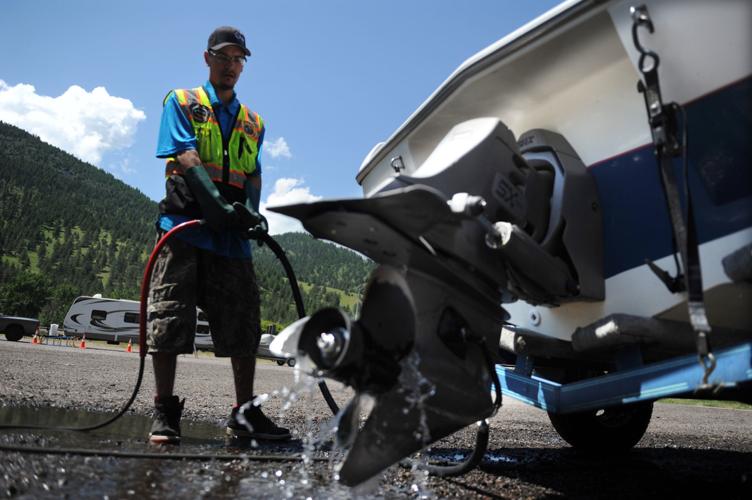 Andrew Davis runs a precautionary hot engine rinse in early June at the Ravalli check station on a boat brought from Texas. The Pacific Northwest is the only area in the United States that has avoided a breakout of invasive mussels. 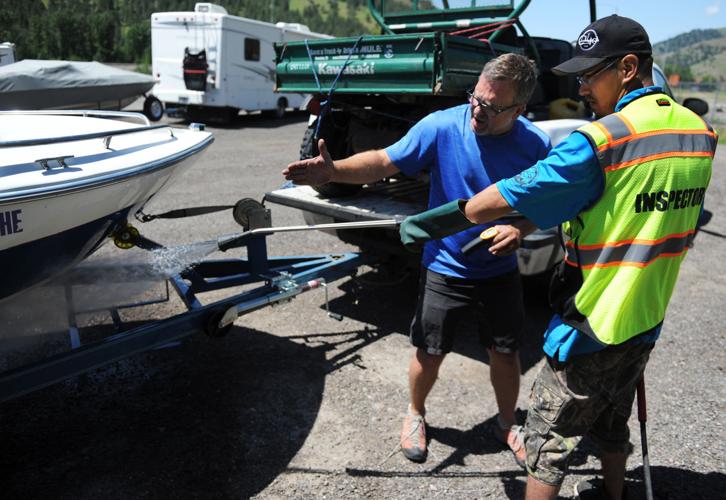 Erik Hanson, left, instructs Andrew Davis on performing a hot rinse on an out-of-state boat in June. To be effective, every part of the boat surface needs to be exposed to 145-degree water for 10 seconds.

Next year, state lawmakers will face a hefty price tag for Montana’s fight against invasive mussels.

Multiple state and federal sources supply this funding, but the bulk comes from two programs created during the 2017 legislative session: an “AIS prevention pass” that must be purchased with a fishing license, and fees on hydroelectric facilities and some of the utilities that purchase their power.

Those hydropower fees are set to expire next year. A new proposal, now open for public comment, from the legislature’s Environmental Quality Council would place the funding burden on boaters, anglers and the state general fund.

The council’s chair, Sen. Chas Vincent, R-Libby, stressed in an email that this “is simply an example of what the public and the legislature can consider for options going into the next legislative session.”

But in the Flathead Valley, the challenge of paying for a mussel-free Montana is already clear. The two groups with the biggest stake in the council’s proposal — its utilities and its water recreationists — have already split opinions on the measure.

The fall 2016 discovery of mussels in Tiber Reservoir created an urgent need for funding to stop their westward spread. Some money — $500,000 — came from the state’s Natural Resources Projects Account and was used for local grants on the issue.

But most of the state’s muscle is with Montana Fish, Wildlife and Parks, the Department of Natural Resources and Conservation, the Upper Columbia Conservation Commission and the Montana Invasive Species Council. Together, the Legislature appropriated almost $6.4 million to these entities.

The main sources for that funding are the AIS prevention pass and the hydroelectric fees, both established by Senate Bill 363. The prevention pass requires residents to pay $2, and nonresidents $15, before applying for a fishing license. Meanwhile, hydroelectric facilities must pay $796 for each megawatt of generating capacity, and utilities that receive more than half of their power from hydroelectric are assessed a fee according to a formula.

Jennifer Thompson, accounting bureau chief for Montana Fish, Wildlife and Parks, said the prevention pass brought in just over $3 million, while the hydropower fees have brought in $2.8 million so far in fiscal year 2018. (While that fiscal year ended June 30, the department has not yet closed the books on it, so these numbers may change in coming weeks). Federal grants are also part of the funding.

Vincent, who sponsored SB 363 during last year’s regular session, said this arrangement wasn’t meant to be permanent. “Last session, we didn't have time to consider some funding options due to time and the lack of administrative capacities,” he said. “The current funding approach was simply a stopgap measure to bridge us to the next session, and [that] is why it will sunset.”

The Environmental Quality Council’s new proposal shifts the millions raised from the power sector to other sources: $1.16 million would come from the General Fund; $2 million from AIS prevention passes costing $4 for residents and $7.50 for nonresidents; $500,000 from the gas tax already collected on watercraft; and $2.76 million from fees on motorized and non-motorized watercraft. These sources would raise about $6.5 million per year.

Vincent said that hydroelectric fees have been vital these past two years, but “it is my position that the industry should not be a source of funding going forward.”

“We fully understand that it’s a critical situation for the state, and it’s great to hear that they’re really following through on finding some other sources of general funding,” said Holter, Flathead Electric’s energy and member services director.

“We were really hit the hardest because most of our power is hydro,” said Ostrom-Price, its public relations Officer. Flathead Electric serves more than 50,000 members in northwest Montana. It gets its electricity from the Bonneville Power Administration — which, in turn, retails the electricity from the Northwest’s hydroelectric dams, among other sources.

The organization has previously estimated its fees at about $650,000 for the biennium. Holter, its president, said that it had been assessed “a little under $300,000” annually.

The impact on residential power bills, he continued, has been small, but “our issue was not the amount, but just the principle of the thing.” Once utilities like the Co-Op were tapped as an AIS funding source, he said, there was a risk they would remain one.

Their sector stands to lose heavily if zebra and quagga mussels cross the Continental Divide. The U.S. Fish and Wildlife Service projects that a mussel infestation could cost the Northwest’s hydropower industry up to $300 million annually — costs that could get passed on to consumers.

Despite these risks, Holter and Ostrom-Price maintain that the expense of keeping the mussels out should fall on the boaters who would carry them.

“In any kind of rate-setting process … the logic is to have the cost-causers be the cost-payers,” Holter said. Ostrom-Price added that, in this case, “the causers are the boaters coming [from] out of the area.”

“They have a lot at stake, and it seems like they should still be part of the solution,” Vashro said of the energy firms. He’s concerned about the new fees’ impact on outdoor recreation.

“Under the new proposal, boating anglers will pay for an AIS stamp and a boat sticker,” he noted. “If you’re a boating angler, you’re gonna be getting a double whammy there.”

Many boaters, Vashro said, have more than one watercraft, meaning their costs could add up. “Right now, looking at my own little fleet, I’m looking at $150 here.”

Lori Curtis, chair of the Upper Columbia Conservation Commission, told the Daily Inter Lake in January that if boaters “were to go through an inspection, do everything they’re told they’re supposed to, and then be told they would have to pay money,” it would turn them against the prevention efforts.

Asked if she viewed that as a risk with this proposal, Curtis replied, “It is a risk, but a temporary one. In all places where this type of fee has been implemented, it has been rough at first, then taken a while to build support. But eventually, it is highly supported,” she said. Several other states already fund their AIS programs in this way.

The proposal is open for public comments through Monday, July 9, according to Joe Kolman, legislative environmental analyst with the legislative Environmental Policy Office. The Environmental Quality Council will discuss those comments at its July 25-26 meeting, then vote in September on whether or not to address AIS funding in a legislative bill. If that vote succeeds, a sponsor would be selected and a bill drafted in time for the 2019 legislative session.

Representative Mike Cuffe, R-Eureka, one of the legislature’s leaders on AIS issues, considers the proposal a solid start. “In general I think they’ve done a good piece of work, [but] there are some things I might want to fine tune about it.”

“Their proposal, I guarantee you, will be worked and re-worked as it progresses to the session.”

The proposal, and instructions for submitting comments, can be found at https://leg.mt.gov/css/committees/interim/2017-2018/EQC/Legislation/legislation.html.

A previous version of this article incorrectly referred to Ross Holter as Flathead Electric Cooperative's president on second reference.

Three grizzly bear cubs orphaned last month after their mother was killed by a vehicle near Lincoln have a new home north of the border.

These plants are toxic for your dogs and cats

This is why wet dogs smell so bad

This is why wet dogs smell so bad

10 ways to prioritize your mental health during work

10 ways to prioritize your mental health during work

Tips to protect your mental health and be productive

Tips to protect your mental health and be productive

Andrew Davis runs a precautionary hot engine rinse in early June at the Ravalli check station on a boat brought from Texas. The Pacific Northwest is the only area in the United States that has avoided a breakout of invasive mussels.

Erik Hanson, left, instructs Andrew Davis on performing a hot rinse on an out-of-state boat in June. To be effective, every part of the boat surface needs to be exposed to 145-degree water for 10 seconds.