HELLER BAR, Wash. — Anglers have banded together to secure ownership and preserve access to a small but important parcel of land along the lower Grande Ronde River.

Members of the groups that spearheaded the effort plan to eventually donate the land to the Washington Department of Fish and Wildlife.

“I think it’s important we preserve and take these opportunities to retain public access and maintain angler opportunity and limit public/private conflict,” said Josh Miller, of Spokane, a member of the board of directors of the Seattle-based Wild Steelhead Coalition.

The Grande Ronde supports a thriving steelhead fishery, and its lower stretches near Heller Bar often become crowded with anglers in the early fall. The property, which includes about 2,000 feet of shoreline, is adjacent to land already owned and managed by the Washington Department of Fish and Wildlife for angler access. The state land includes a primitive boat ramp, restrooms and camping spots. The private property provides access to the popular Shadow Hole and the Turkey Run, both just a little more than one mile upstream from the mouth of the Grande Ronde. 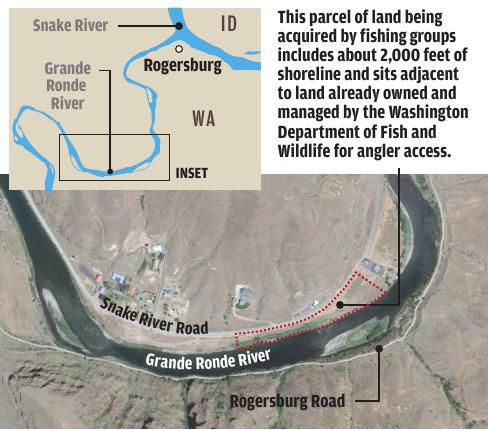 The Wild Steelhead Coalition worked in partnership with the Inland Empire Fly Fishing Club of Spokane to secure the property owned by Lynn Miller of Lewiston, Idaho. The state has long had an access easement to the undeveloped property but was not immediately able to purchase the land. Jim Athearn, a member of the Inland Empire Fly Fishing Club, said Miller was interested in selling the property and seeing that it remained open to the public.

The club agreed to work to acquire the property and partnered with the Wild Steelhead Coalition because of its 501c3 tax status. Together, they raised the modest asking price of about $30,000, and they hope to close the deal in the near future.

“It’s a wonderful thing, and it’s the end product we are after — and that is public access. There is too much land being bought and closed, and we didn’t want to see that happen with this piece,” said Athearn, of Medical Lake, Washington.

Chris Donley, fish program manager for the department at Spokane, said his agency hopes to acquire the property, perhaps in about a year, and continue to manage it for access.

“The Grande Ronde is kind of one of the last bastions for fishing for steelhead,” Donley said. “We seem to be consistently closing everything, but the Grande Ronde stays open. Allowing access there seems like a good idea.”

Athearn praised the many individuals and fishing clubs who donated money for the project.

The agency also is in the final stages of taking ownership of the Snyder Bar boat ramp and primitive camping area along the Grande Ronde near Shumaker Grade. The land is being donated by Larry and Marion Cassidy of Vancouver, Washington.