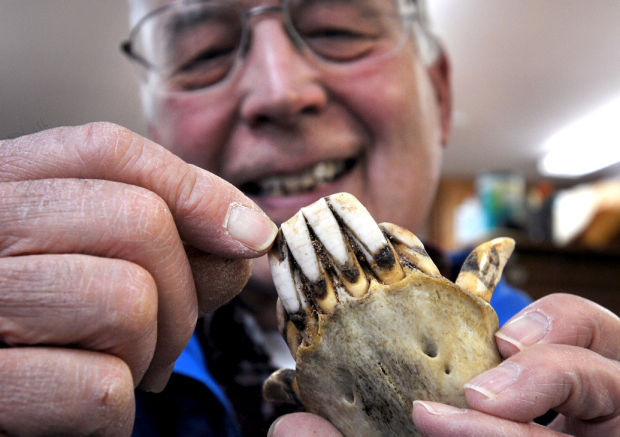 Gary Matson, owner of Matson Laboratory LLC in West Riverside, displays the mandible of a Russian wild boar killed by a Siberian tiger that his lab will determine the age of. Matson is retiring after 45 years of analyzing animal teeth. 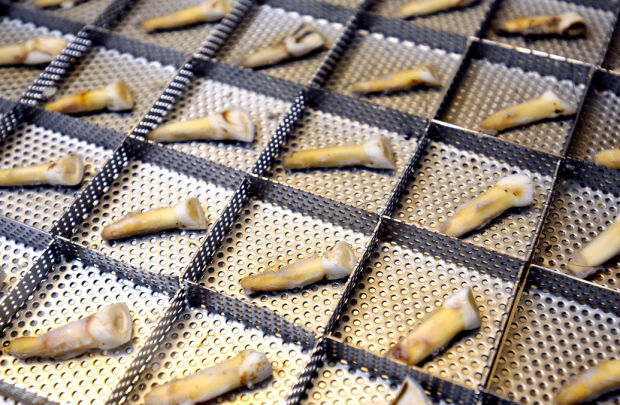 Elk teeth bathe in a Tergazyme solution, an enzyme that breaks down organic matter. 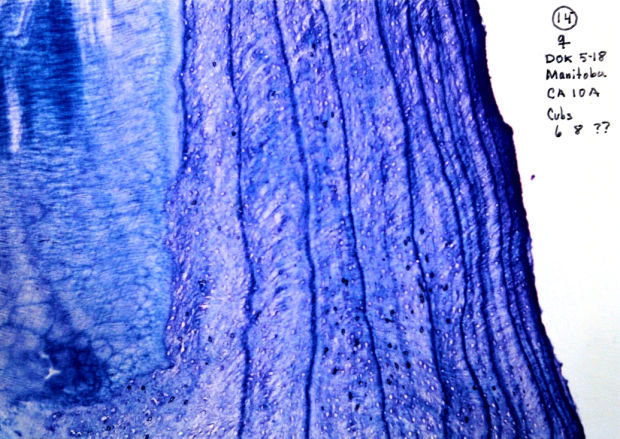 A photographic slide of a bear tooth shows the concentric rings that allow technicians to determine its age. 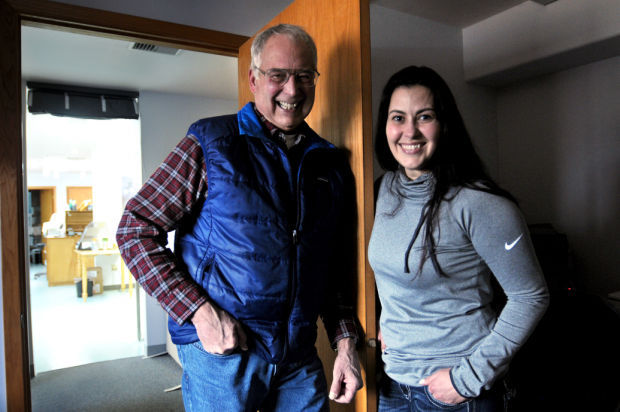 Matson is handing the keys to his lab to Carolyn Nistler, who has bought the business. 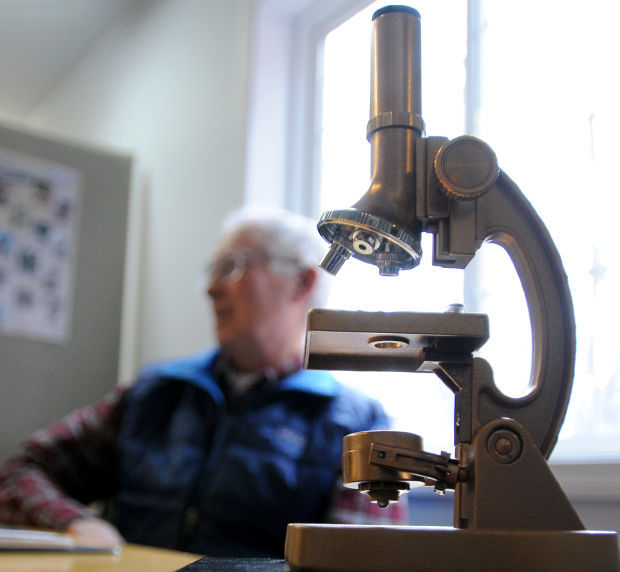 Matson was given this golden microscope award by his staff.

Gary Matson, owner of Matson Laboratory LLC in West Riverside, displays the mandible of a Russian wild boar killed by a Siberian tiger that his lab will determine the age of. Matson is retiring after 45 years of analyzing animal teeth.

Elk teeth bathe in a Tergazyme solution, an enzyme that breaks down organic matter.

A photographic slide of a bear tooth shows the concentric rings that allow technicians to determine its age.

Matson is handing the keys to his lab to Carolyn Nistler, who has bought the business.

Matson was given this golden microscope award by his staff.

WEST RIVERSIDE – For the past 45 years, the wildlife tooth fairy has been headquartered at the base of Woody Mountain.

Delivery drivers come to the house at the end of Flagler Lane, bearing boxes of single teeth or bags with thousands. There, Gary Matson and his lab technicians analyze the incisors and fangs and molars of weasels and walruses and any other animal under scientific review. While there’s a real surge shortly after fall hunting season, the lab averages about 400 tooth slides a day.

“We get animal teeth from all over the world,” Matson said. “We just got a shipment of 15 or so African wild dog teeth.”

That sits next to the box holding the mandibles of wild boars killed by Siberian tigers – a research project managed by the Brooklyn Zoo. While the lab is prepared for the complexities of import permits and international wildlife handling protocols, its U.S. clients handle most of that paperwork first.

Matson’s work was honored last month by the Montana chapter of the Wildlife Society, one of the nation’s oldest wildlife science organizations. This summer, he intends to retire and pass the task to a new generation of analysts. His own crew of employees created a golden microscope to memorialize his departure.

Matson earned his graduate degree under the mentorship of University of Montana mammalogist Phil Wright. He developed a lifelong fascination with microscopy and the way things looked at extreme magnification.

That led him to a business idea making slides of animal tissue for classroom use. He assumed he’d sell lesson kits to biology teachers and professors. Gary and wife Judy started the lab in 1969, and soon found the market for microscopic liver slices wasn’t going to keep them in groceries.

But at about the same time, the concept of aging animals by tooth analysis was taking hold. A friend mentioned the tools Matson had acquired for tissue slides could also be used for cutting teeth.

“That came along just when we needed to pay the bank back,” he said. “Our first mailing list was all printed on IBM cards.”

Matson Laboratory LLC has been growing steadily ever since.

The lab has a mix of high tech, low tech and weird tech. A special table with dozens of postage-stamp-sized compartments soaks shipments of teeth to remove grit and grime. When the teeth have been gently cooked long enough, a technician rubs the gunk off with a piece of mesh that looks like it came from a grocery store vegetable bag.

Next to the Leica microscopes is a little robotic gizmo that waves a bar round and round, flipping it over every minute or so. It’s the automatic blade sharpener for the lab’s microtome, which shaves impossibly thin slices of tooth material to examine under the microscopes.

The end result is a bluish-black photo that looks sort of like the cross-section of a tree, with wobbly but concentric rings around a core. The patterns are different depending on species and gender. Black bear teeth appear different from those of grizzly bears, and black bear females differ from males. Black bear moms' teeth produce a distinctive band on the year they have a litter of cubs. Grizzly moms' teeth don’t. Human teeth are wildly unreliable as an aging or sexing tool.

“We emphasize the importance of doing science correctly,” Matson said of the eight-person lab. “It’s a way of discovering truth.”

Matson’s operation is a service lab, meaning it produces highly technical data that other labs and scientists use in their research laboratories. While he doesn’t explore or test any new scientific hypotheses as part of the business, Matson said he remains up to date and fascinated with the potential tooth analysis might deliver.

“We can’t build a model yet from bears and use it for raccoons,” Matson said. “We can’t tell if the space between rings indicates a good or bad year, like trees do. But we can help with lots of other things.”

A main function of tooth-aging, and the reason game wardens pull a tooth from all the deer and elk passing through check stations, is to track the results of big-game hunting. Knowing the sex and age class of hunted animals helps wildlife managers adjust quotas and restrictions for hunting seasons.

But sometimes, the purpose can be more esoteric. When the Exxon Valdez oil tanker wrecked off the Alaskan coast, Matson Laboratory received loads of sea otter teeth to age. Sea otters are a valuable trapping species, and younger animals would have had more potential for future offspring than older ones. Matson’s age tables helped determine the monetary value of wildlife killed by the spilled oil.

Tooth aging takes a 14-step process. It used to be just five or six. Over the years, Matson consistently improved the protocol to make it more reliable and eliminate errors.

“Now we can put a walrus tooth and a raccoon tooth in the same cleaning solution and both will be fine,” he said. “The first 10 years were a little hit-or-miss. The last 25 have been stable.”

That’s welcome news for Carolyn Nistler, who has bought the laboratory and spent the past several months learning its procedures. Nistler has her own business, EcoLogic, which she started seven years ago. She provided independent wildlife habitat consulting – examining what kinds of animals used land that a company or government agency planned to develop.

“This is an almost perfect fit for me,” Nistler said. “It will become full-time for the next 30 years.”

Nistler plans to move the operation to Manhattan, which will be close to urban Bozeman and her home in Three Forks. Gary and Judy Matson intend to stay in the Missoula Valley and catch up on exploring all the cool parts of Montana they haven’t visited yet.

“When we first came to Montana, we spent every weekend exploring,” Matson said. “Now we want to go farther and explore more. Not many people are blessed with all this cool stuff right out our door.”

They haven’t resurrected Mr. Spock in the National Genomics Center for Wildlife and Fish Con…