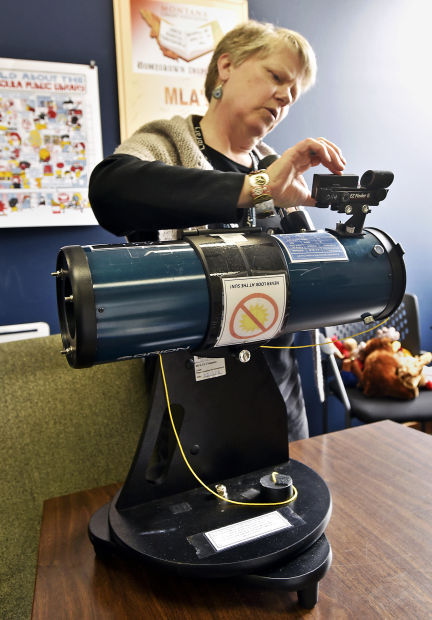 Mary Drew Powers looks at the Orion StarBlaster telescope available for checking out at the Missoula Public Library. The telescope, which is ideal for astronomical viewing, comes with plenty of instructions and information on stars and celestial objects. 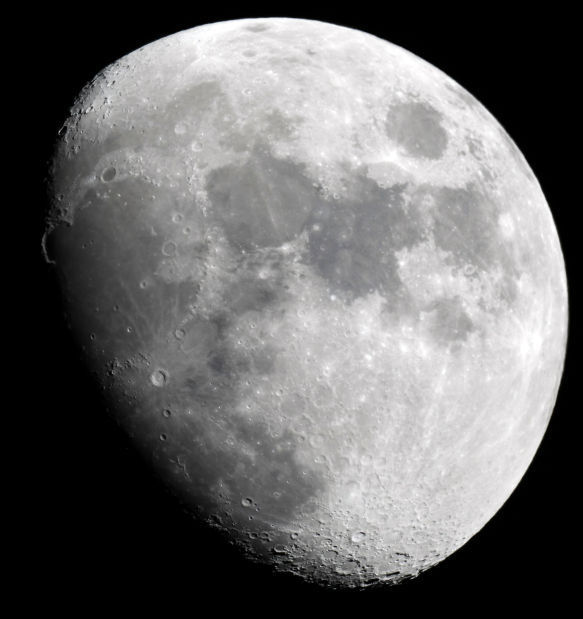 A photograph of the moon clearly shows its craters. 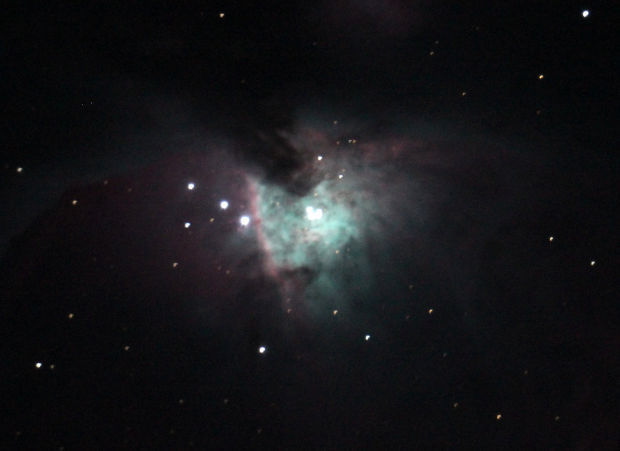 The Orion nebula as seen through the telescope.

Mary Drew Powers looks at the Orion StarBlaster telescope available for checking out at the Missoula Public Library. The telescope, which is ideal for astronomical viewing, comes with plenty of instructions and information on stars and celestial objects.

A photograph of the moon clearly shows its craters.

The Orion nebula as seen through the telescope.

Sometimes, a journey across the galaxy just takes a trip to the library.

And we’re not talking a trip to the science-fiction aisle. Head instead for the reference desk at the Missoula Public Library and ask to check out its Orion StarBlaster telescope.

“At our workshop last week, one woman made a reservation on the spot,” said library spokeswoman Mary Drew Powers. “She had something she wanted to see that weekend.”

That might have been Jupiter, which was nearing the end of its opposition – the time when it’s closest to Earth and most easily visible. Or perhaps she wanted to use Venus’ proximity to the Pleiades to see if what westerners call “The Seven Sisters” star cluster is also the inspiration for the Subaru auto logo.

“A lot of people get intimidated by telescopes,” said Nick Wethington, who coordinates the spectrUM museum next door to the library and is president of the Western Montana Astronomical Association. “They think about the computers attached to them, and how much they cost. But with this program, you can get a telescope for free and get used to it. You don’t need something that costs thousands of dollars to look at the sky.”

The Orion StarBlaster comes in an intimidatingly large, white carrying case. But Powers lifted it with ease and had the telescope focused on the eaves of the Missoula Symphony Association across the street in less than a minute. One unfortunate challenge of sky-watching in Missoula in April is the frequent overcast weather.

Fortunately, the telescope comes with plenty of instructions to peruse while waiting for dark. A pile of flip-cards explains the basic operating procedures, such as adjusting the focus and activating the laser sighting tool.

After that, users can choose from booklets, a DVD, simple star charts or more complex astronomical glossaries to guide their observations. Powers said she’s found different users have different levels of advising they’re comfortable with, and the library tries to match as many as possible.

The Orion is a reflecting telescope, meaning it uses an internal mirror to gather light and bounce it back to an eyepiece. The design tends to be much more accurate for astronomical watching than the more straight-line series of lenses in a pair of binoculars or rifle scope.

“The moon is really rewarding to look at, and the planets,” Wethington said. “They’re easier to find, and the view you get from them is very nice through that telescope. For galaxies and nebulae, the library scope is a great starter scope.”

Wethington got interested in astronomy as a high school student.

“I still remember writing a check for $200 for my first telescope,” he said. “That was the first time I wrote a check that large.”

College classes diverted him for a while, but he found himself drawn back to the dark skies after graduating. Wethington spent several years as a reporter for the Universe Today astronomy blog, and joined an amateur astronomy club in Iowa. When he moved to Montana, he found plenty of fellow sky-watchers.

“It’s really easy to get into,” Wethington said. “Especially in Montana, where you have really dark skies.”

Shelf Life: Get 'MAD about The Library' during MPL's annual benefit

Friends, fellow writers and book lovers remembered award-winning author Ivan Doig as a gracious and kind person who loved both literature and diligent historical research. Doig, referred to as "the Dean of Western writers," died early Thursday morning, according to an email from his publisher.

Anyone with a free Missoula Public Library card may reserve the Orion StarBlast telescope for up to a week by visiting the reference desk or bit.ly/1H8Er6n.

April 19: Mars appears next to a waxing crescent moon on the western horizon at sunset, with Venus above.

April 21-23: Lyrid meteor shower peaks, although 10 to 20 shooting stars an hour can be expected between April 16 and 25. Best viewing time is 2 a.m. to dawn in the western sky around Venus and the waxing crescent moon.

April 25-27: First-quarter moon and Jupiter share the western sky from dusk to nightfall.

May 3: The “Flower Moon” appears full in the eastern sky – the second full moon after the spring equinox. Also known as the “Milk Moon” or “Planting Moon.”

May 4: Saturn begins appearing in the southeast sky in evening, chasing the moon across the sky near the constellation Scorpius and the bright star Antares.

The Payne Family Native American Center on the University of Montana campus has a Star Gazing Room and planetarium. It is available for both public and private shows.

The University of Montana Physics and Astronomy Department hosts public planetarium shows depicting current night sky features, including constellations, planets and other events. The 50-minute presentations also include a lecture on astronomical topics such as solar system exploration, stellar groupings or extrasolar planets.

Upcoming public shows include April 20, May 8 and May 18. Tickets cost $6 for adults and $4 for children 12 and under. Seating is limited to 25, so tickets should be purchased in advance.

For tickets and more information about public and private shows, call 243-2704 or visit bit.ly/1J40kSX.