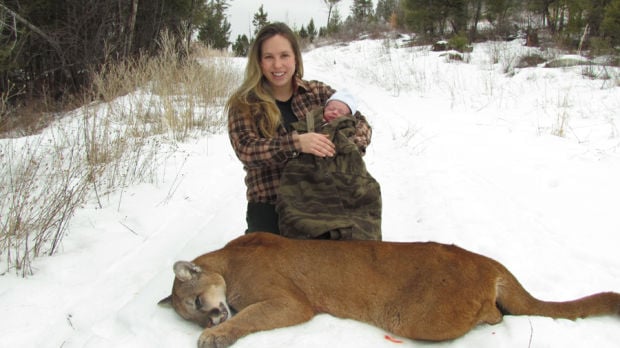 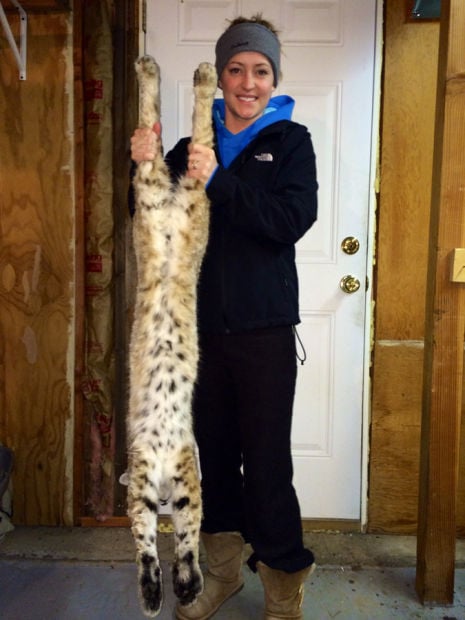 By STEPHEN YOUMANS for the Missoulian

Ashley Westphal harvested her first mountain lion early in 2012. It was an exhausting hunt that went against her doctor’s advice.

Her son had been born via caesarean section just two weeks prior.

Westphal, 30, along with Amanda Morgan, are finalists in the 2015 Extreme Huntress competition, the only two from Montana. Extreme Huntress is a contest that seeks the best women hunters from around the world, and is meant to inspire more women to hunt and pass their passion to following generations.

A nurse practitioner from Philipsburg, Westphal has been hunting for 12 years.

“My dad took me hunting when I was a girl,” Westphal said. “But he is not an avid hunter. He taught us gun safety.” Her husband Cody, she said, helped her become the hunter she is today.

“My husband is the reason I know how to hunt,” Westphal said. “He showed me how to be a responsible hunter.”

Hunting is a family affair, she said, and is how they like to spend their free time. Their wedding was even subject to their hunting plans.

“There was no way I could have a late-summer wedding,” Westphal said. “It would have interfered with bow season.” So they got married in May, which, as it happened, was not much better.

“I didn’t realize a spring wedding would interfere with bear season,” she said.

Westphal’s son has not been left out of their hunting, and was with her the day she took her mountain lion.

“My son has been on virtually every hunt with me since that time,” Westphal said. “In the end the experience was special because he was there.”

Amanda Morgan, 26, shares Westphal’s passion for hunting. Originally from Alberton, Morgan now lives in Clancy, and has been immersed in hunting her entire life.

“I started when I was real young,” Morgan said. “Dad got me shooting a BB gun when I was 5 years old.”

Morgan’s interest in hunting took off while she was working at Sportsman’s Warehouse in Missoula during high school, she said, and has grown to encompass almost all aspects of the sport, including trapping with her husband, Chris.

She has also developed an interest in bowhunting over the past couple of years, Morgan said, and teaches bowhunter safety in Helena. She also volunteers with the Montana Fish, Wildlife and Parks’ Montana WILD archery program.

“I basically put a bow in a young kid’s hands and teach them to shoot it properly,” Morgan said.

According to Morgan, the Extreme Huntress competition plays an important role in spreading awareness of the hunting lifestyle.

“It’s a great reason to get women and their kids out there,” she said. “It’s showing the heritage and passing that heritage along.”

The preservation of the hunting heritage is the main reason for the competition, said Tom Opre, owner of Tahoe Films Ltd. in Kalispell, the company behind Extreme Huntress.

“Women are the fastest-growing segment in hunting right now,” Opre said. “If you get women out there hunting, the kids are going to go, too.”

Women from around the world can enter the Extreme Huntress competition, Opre said, and this year there are contestants from as far away as South Africa and Australia. Out of the 20 semifinalists, of whom Westphal and Morgan are included, six will be invited to the 777 Ranch in Hondo, Texas, where the 2015 Extreme Huntress will be determined.

Once on the ranch, Opre said, the final six will compete in head-to-head challenges that will be filmed and posted online. These challenges will include hunting exotic animals like black deer, gazelles and oryx, along with skill competitions like long-range shooting and biathlon.

The winner will be chosen by a combination of head-to-head challenge results, online voting and on-site judging, Opre said. The judges will be Opre’s wife Olivia, winner of Safari Club International’s Diana Award, and outdoor television personalities Larry Weishuhn and Jim Zumbo.

The winner will be revealed at the Dallas Safari Club’s annual convention, Opre said.

Westphal and Morgan are not the first Montana women to make it to the semifinals, Opre said. Angie Haas-Tennison of the Flathead Valley won in 2011.

Read essays posted by each semifinalist, and vote for your favorite contestant at extremehuntress.com. Voting ends Sunday.

Stephen Youmans is a journalism student at the University of Montana and an intern in the Missoulian newsroom.

What household items need cleaning everyday and what can wait

Along with all the irises, roses and strawberries popping up in Missoula yards this week, there’s another rite of spring about to appear: wild…

Shooter's Weekend in Missoula and Butte will benefit Operation Valor

Guns will be blazin’ for a good cause the first weekend of August, as Bob Ward’s Sports & Outdoors, a sporting goods store headquartered i…