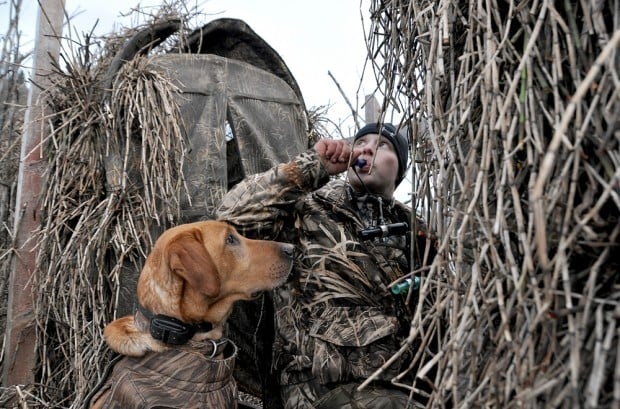 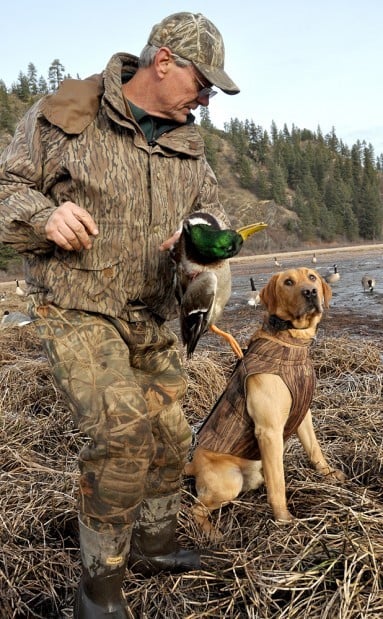 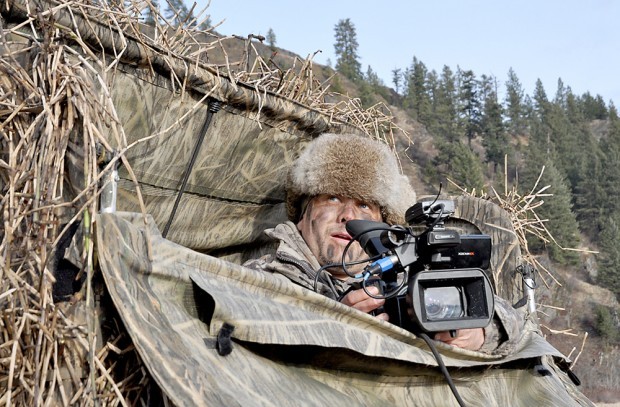 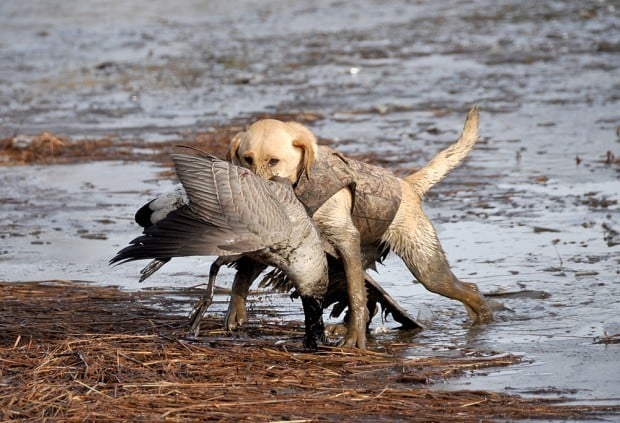 Riley, a puppy yellow Lab, makes its first retrieve on a goose during filming of an episode of "Working Man's Retriever."

SPOKANE - Every sportsman has hunted with a dog that runs wild, flubs retrieves or mixes up the word "sit" with "scram."

Indeed, most waterfowlers and bird hunters own dogs that are far from perfectly trained, yet all they see when tuning in to a TV hunting show is flawless dog work.

That will change in April, when "Working Man's Retriever" debuts on the Sportsman Channel.

"Watching a well-trained dog is enjoyable," said Dan Hosford, a professional dog trainer from Medical Lake, Wash. "But you'll learn a lot more by seeing a dog that makes mistakes in real hunting situations and then watching the training methods to correct those mistakes."

Hosford is teaming with cameraman and editor Mickey Hough of Spokane to produce 26 episodes of the series, which is scheduled to debut on April 7.

The program features various flushing and retrieving breeds, including water spaniels, springers, golden retrievers, Labrador retrievers and others. One episode features flushing breeds hunting with a German shorthair pointer. The dogs will represent a wide variety of skill levels.

Among the subjects is Kobe, a black Lab pup that's featured in short segments throughout the series.

"The show will follow Kobe from a 100 percent untrained puppy and show how he's worked into a finished dog," Hough said.

"Some episodes will be heavy on hunting, some will focus more on the training," Hough said. "But every episode will have an aspect of hunting, including little segments on things like cooking the game we harvest."

Hosford already has lessons learned from 40 years as a professional dog trainer compiled into a series of "Working Man's Retriever" dog training DVDs. The TV episodes involve thousands of miles of traveling to make the lessons more entertaining and applicable to a wide range of sportsmen.

Hunting situations filmed so far for the TV show involve snow geese depredation seasons in Saskatchewan, pheasants in the Dakotas and chukars on the Salmon River.

This week, Hosford and Hough are in Nevada and Arizona filming dog training situations while hunting quail in the desert.

Two weeks ago, the pair was streaking across the water, ice and mud of Idaho's lower Coeur d'Alene River in an air boat to feature a couple of yellow Labs hunting ducks and geese.

The work day started at 2:30 a.m. as they traveled to meet hunter Steve Croston of Pinehurst, Idaho. Croston already had loaded his two dogs and bags of decoys onto a skiff thrust into motion Everglades style by the prop of a 570-horsepower aircraft engine.

No one knew whether the waterfowl would decoy toward their blinds that morning, or whether the shooters would find their marks, or how the dogs would perform.

"This is the way it really is," Hosford said as he snuggled into the blind.

Gunner, a trained but not finished Lab, performed admirably, retrieving ducks and even heavy honkers from mud and breakable ice. Most hunters would pay a bundle for a durable dog that performed that well.

But Hough's camera caught Gunner getting distracted or dropping some birds before bringing them back to the blind.

During breaks in the hunting action, Hosford worked on camera with Croston and the dog, throwing ducks to reinforce retrieving lessons. Hosford was as frank with the dog owner as he was direct with the dog.

"You're talking too much," he told Croston as he tried to talk Gunner out to bring back a duck. "You sound like an old lady in a chicken pen. Limit your talking. Let your whistle do most of the work."

"I admit, any problems Gunner has are my fault for not following through with the training at home," Croston said. "It takes discipline on my part, and I have to work on that."

Hough captured a special moment when Hosford and Croston decided timing was right for Riley, a Lab pup, to make its first retrieve on a big honker.

"With a pup, you want to make sure the goose is stone dead for the first retrieves," Hosford said.

Riley did a good job applying his early training foundation to an icy, muddy slough.

Croston heaped praise upon the dog.

Lessons learned, and another "Working Man's Retriever" episode in the can.

SPOKANE - Dan Hosford, a professional hunting dog trainer for 40 years, shared the following tips and philosophies during a waterfowl hunt in …

Riley, a puppy yellow Lab, makes its first retrieve on a goose during filming of an episode of "Working Man's Retriever."