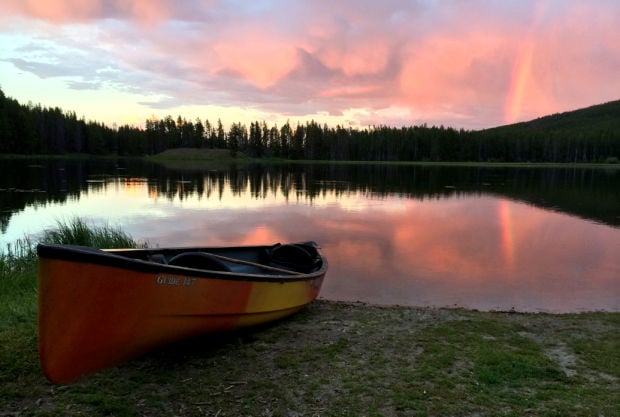 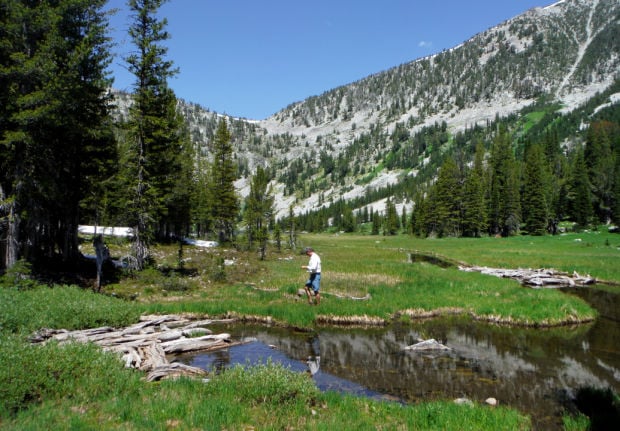 Homer Young’s Peak tops out at 10,610 feet above sea level, some 2,000 feet above Rock Island Lake’s basin in the Beaverhead Mountains. The area is popular with snowmobilers as well as summer backpackers, and would remain mixed use under a proposal now before Congress. 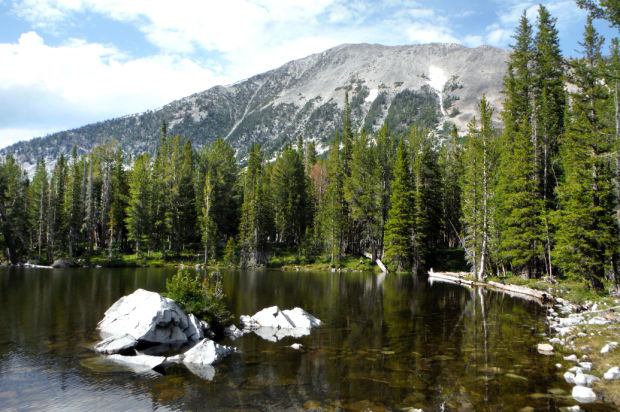 One of the namesake rock islands of Rock Island Lake in the Beaverhead Mountains sports its own grove of stunted trees.

Homer Young’s Peak tops out at 10,610 feet above sea level, some 2,000 feet above Rock Island Lake’s basin in the Beaverhead Mountains. The area is popular with snowmobilers as well as summer backpackers, and would remain mixed use under a proposal now before Congress.

One of the namesake rock islands of Rock Island Lake in the Beaverhead Mountains sports its own grove of stunted trees.

JACKSON – One of the most isolated corners of Montana has one of the busiest recreation playgrounds.

Visitors to Miner Creek can front-country camp along a lake on one end or backpack to another. Take a different spur and you can mountain-bike or snowmobile to a third. Get really ambitious and you can log a big chunk of the Continental Divide Trail.

“It’s one of the most iconic landscapes anywhere in Montana,” said John Gatchell, conservation director for the Montana Wilderness Association. “The Big Hole Valley has those working ranches and then the wild country – that big sweep of the Continental Divide like a great arc. It sweeps a couple hundred miles and on to the Pintlers before heading north to Butte.”

The little town of Jackson has a popular hot springs along with a mix of farming, ranching, hunting and fishing pursuits. Motorists descending Montana Highway 43 from Lost Trail Pass first encounter the Big Hole National Battlefield complex before being overwhelmed by the sheer size of the surrounding opening.

The Beaverhead Mountains form the southwestern edge, while the Pioneers dominate the east and the Pintlers jut up on the north. All feature peaks near or over 10,000 feet in elevation.

The region known as the West Big Hole has been a proposed wilderness area since 1988. The Beaverhead-Deerlodge National Forest classifies it as inventoried roadless land, but allows a mix of different activities in different drainages.

It’s in U.S. Sen. Jon Tester’s Forest Jobs and Recreation Act as a mix of wilderness and multiple-use acreages. About 44,000 acres in two chunks would get the “Big-W” wilderness designation that prohibits motorized or even wheeled activity, but allows hiking, fishing, hunting and other quiet pastimes.

Another 95,144 acres would be considered “recreation management areas.” Those preserve motorized access to popular snowmobiling and biking areas like Homer Young’s Peak and Ajax Peak.

The Miner Lake Forest Service campground sits about 10 miles west of Jackson on a well-maintained dirt road. It has 18 campsites, with some close to the shore and others farther up in the woods. The lake has an intriguing peninsula in its middle that extends the shoreline for waterfowl and other critters.

A very rocky dirt road pushes another 2 miles up the drainage to a trailhead. Vehicles with high clearance can travel it with caution. Those with street cars should plan on adding extra mileage to their hike.

The foot trail divides after another mile at a bridge crossing Miner Creek. The route to the left leads to Upper Miner Lakes and is posted for non-motorized use only (including no snowmobiles in winter). The route to the right delivers hikers, bikers, snowmobilers and other backcountry users to Rock Island Lakes. Both trails involve a short but steep 2-mile approach to their respective basins.

Rock Island Lake has several bonsai-like knobs supporting beautifully stunted trees surrounded by water. Homer Young’s Peak rises more than 2,000 feet above to top out at 10,610 feet above sea level. While the trail seems to dead-end in the basin, another route leads over a saddle of Homer Young’s to march along the Continental Divide (and the Montana-Idaho border) for several miles.

The north shore of Rock Island Lake is a typical mountain basin, with a forest of fir and whitebark pine right down to the water. But the south shore is a remarkable green apron watered by dozens of tiny rivulets – some just inches wide. The bog rolls up and down like a scrunched carpet, with the unexpected feature that high points in the grass were wetter than low points right by the streams. The mid-July sun warmed the bog water to near bathtub temperature, although the lake remained chilly.

The Upper Miner Lake basin is considerably steeper, reflecting the more rugged character of the two proposed wilderness areas. The access difficulty makes it ideal for mountain goats and wolverines that depend on heavy snow for suitable habitat.

Gatchell said debate over the use of the Beaverhead Mountains went through several chapters as different interest groups made their wishes known. The early 76,000-acre zone from Ruby Creek in the north down to nearly the Big Hole River would have taken several popular snowmobile areas off the map.

“It was controversial for a while,” Gatchell said. “They did a lot of outreach and listened to different constituencies, that was one of the major changes from earlier proposal. It reflects a combination of motorized and non-motorized use in current management plan. All that high, rugged mountain country provides the headwaters for the Big Hole River. It’s cherished by a lot of different people that recreate there in a lot of different ways, and the proposal reflects that.”

The grizzly bear answers to a lot of names.

Celebrate 50th anniversary of the Wilderness Act with summer activities

The fresh snow on the mountains notwithstanding, Saturday’s summer solstice opens a packed c…

Montana is covered in some of the largest wilderness areas in the country. Naturally, it see…

When the Wilderness Act was passed in 1964, NASA was sending astronauts into space guided by…

GREAT FALLS – This year marks the 50th anniversary of the Wilderness Act, a piece of legisla…