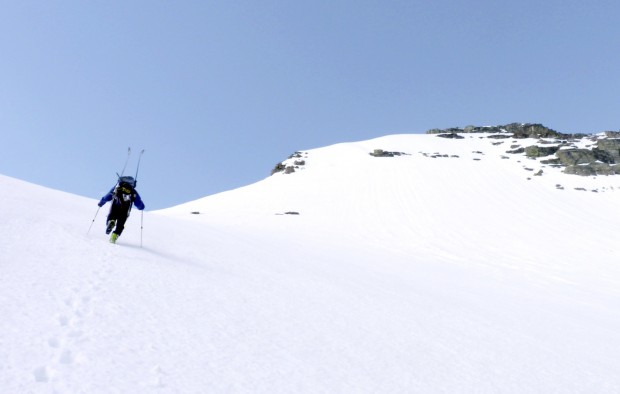 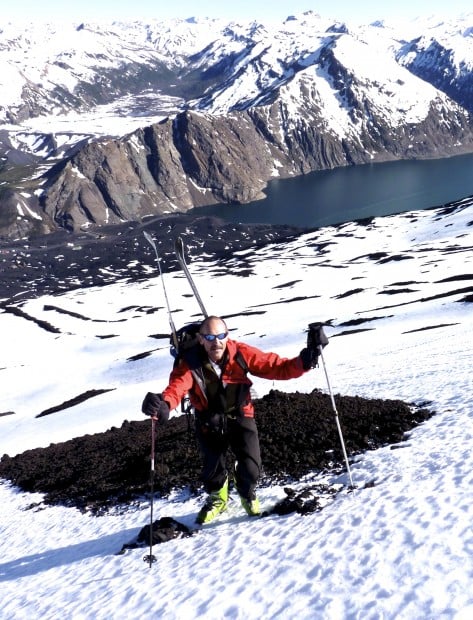 At 57, Andy Zimet has been skiing his entire life, and ski touring in the high mountains for nearly 40 years. The sport has taken him to the Alps and the Himalayas. In this photo, Zimet is shown ascending a snowfield on Antuco Volcano in Chile. 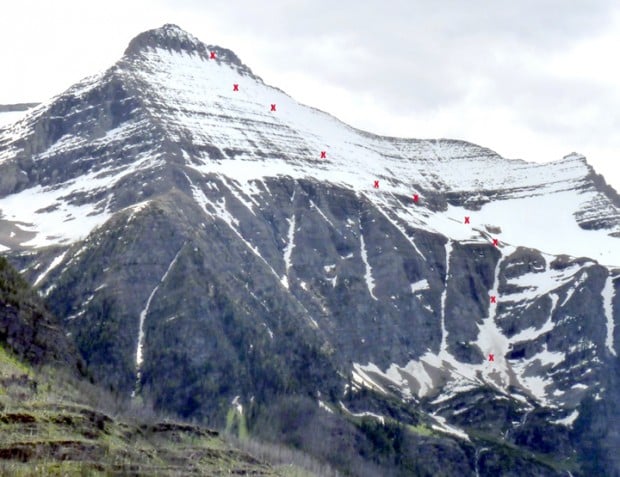 Shown here is Zimet’s first descent route on Kintla Peak’s west face and north buttress. He descended through a steep and narrow couloir to complete the line, which he skied solo. 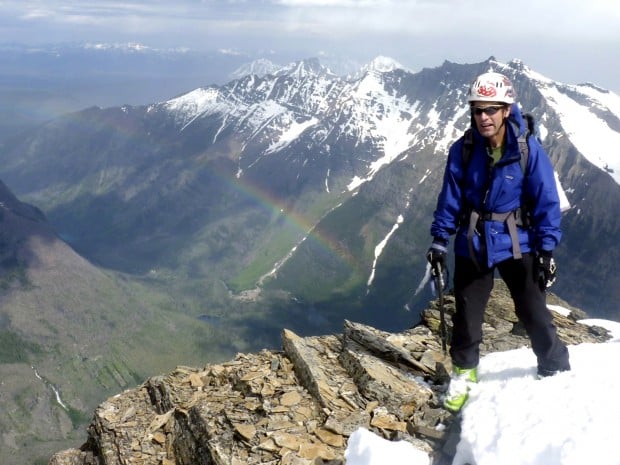 Shaver climbs Kintla Peak, with the edge of Kinnerly Peak and a rainbow over the Livingston Range shown in the background.

At 57, Andy Zimet has been skiing his entire life, and ski touring in the high mountains for nearly 40 years. The sport has taken him to the Alps and the Himalayas. In this photo, Zimet is shown ascending a snowfield on Antuco Volcano in Chile.

Shown here is Zimet’s first descent route on Kintla Peak’s west face and north buttress. He descended through a steep and narrow couloir to complete the line, which he skied solo.

Shaver climbs Kintla Peak, with the edge of Kinnerly Peak and a rainbow over the Livingston Range shown in the background.

WHITEFISH – For 20 years, Andy Zimet kept mum about his quest to become the first person to ski from the summits of Glacier National Park’s “Big Six” – those snow-marbled, pyramidal peaks that rise over 10,000 feet in the sky.

To be fair, Zimet didn’t exactly strike out to set any records. A fit and enterprising ski mountaineer, the Whitefish anesthesiologist merely wanted to explore the outer limits of his sport and push his abilities, skiing summit lines that were both exhilarating and challenging.

As it happens, Glacier Park’s sextuplet of 10,000-footers handily fit the bill.

But a silence spanning two decades betrays deeper ambitions, and the likelihood that no one else had skied all six peaks made the pursuit all the more alluring. In 1991, Zimet embarked on his “unofficial” project to ski Mount Jackson, Mount Merritt, Mount Siyeh, Mount Cleveland, Mount Stimson and Kintla Peak, and to register them as “first descents” whenever possible – that is, descending routes that had not been skied previously. In that first season, he ticked off three peaks from his list, climbing and descending them in quick succession between April and July.

Last July, with not one but two hard-earned first descents off the summit of Kintla Peak – the centerpiece of his project – the 57-year-old Zimet’s tenacity paid off, and he likely became the first person on record to accomplish the feat.

So he finally opened his mouth.

“I tend to be a little bit paranoid, but this was such a beautiful line that I wanted to keep very quiet about it,” Zimet said of Kintla. “I was nervous about someone getting to it before me.”

His crown jewel did not come easy.

Zimet is modest about his accomplishment and admits that he wasn’t always charging forth with the aim of setting a record.

After quickly skiing the first three peaks – Jackson, Merritt and Siyeh – in 1991, he waited until March 1997 before completing another, a solo ski of Mount Cleveland. Two months later, he and local skier Pete Costain descended the southwest face of Mount Stimson, which they claimed as a first descent (and for which the 2011 book, “50 Classic Ski Descents of North America,” gives them credit).

What followed after Stimson was a 12-year hiatus that saw Zimet devoting much of his time to whitewater kayaking, with prime whitewater conditions coinciding with the finest high-mountain skiing conditions, in spring and early summer when the snow is most stable.

A neck injury eventually forced him to back off of kayaking, and in 2009 he attempted and completed a solo line down Mount Jackson’s northwest face, bringing to five the number of 10,000-foot peaks he had descended in Glacier National Park.

Although Zimet attempted Kintla twice during those years, the approach to the mountain’s north and west faces is extremely difficult, requiring a full day of slow, plodding bushwhacking through a nearly impenetrable thicket of alders and across a lattice of deadfall. The task is made all the more difficult by a loaded pack and protruding skis.

“The bushwhacking is just horrendous,” he said. “With skis on your back it can drive you to psychosis. So, for a while, that put the kibosh on my plans.”

And then Zimet heard whispers that the wildfires that tore through Glacier Park in 2003 may have burned through the un-navigable route up Red Medicine Bow Creek and the crux of the approach, making the route passable. He returned in 2009, when the spring conditions would be perfect, but when he reached the outlet of Upper Kintla Lake the runoff was chest deep and he couldn’t cross.

“What I hadn’t counted on is that it would be the height of runoff,” he said. “I just turned around. I knew I would need a small inflatable raft to cross.”

He returned again the following July with a friend, Jay Shaver, and they paddled across Lower Kintla Lake in a canoe and hiked to the upper lake, then used pack rafts to cross the outlet.

From his five previous trips scouting and reconnoitering the peak, Zimet knew there was a near-perfect line that follows Kintla’s west face before dipping into a steep, narrow couloir along the northwest buttress.

“That was the prize,” he said. “It just has an absolutely beautiful face on it, and then there is a spectacular, steep, narrow couloir.”

The route is also ideal in that it begins on a west-facing aspect and finishes on a north-facing aspect, which receives less sun – “the perfect combination,” Zimet said.

It was not to be. To ski the route, Zimet and Shaver would have to ascend the same path they intended descend, lest they encounter unforeseen obstacles, and on that Saturday poor visibility and weather conspired to derail their plans.

Instead, they skied down Kintla’s impressive north face and northwest gully, which is also likely a first descent.

“It should have been satisfying, but I just felt unfulfilled,” Zimet said. “So I had to go back. I had spent too much time on that peak to let it go.”

The following weekend, Zimet returned, this time alone, and again endured a maddening day of bushwhacking before making camp at the snow line. He bivouacked under cold, clear skies and awoke to a bluebird day – the perfect conditions for skiing high peaks, because the snow freezes overnight.

Using ice axes and crampons, Zimet made his way up the route, carefully assessing the conditions along the couloir, which is as narrow as 5 feet in places and as steep as 50 degrees, and involves a hidden passage through a cliff band.

In mountaineering, professing first descents and pioneering new routes can be fickle claims to make, but so far no one has disputed Zimet’s title, which he dutifully reported to the Glacier Mountaineering Center in Kalispell and to the Polebridge Ranger Station.

Local mountaineering experts are fairly certain that Zimet can rightly lay claim to the record; while others have climbed all six peaks, to be sure, and one mountaineer has climbed them all in winter, no one has reported skiing off the top of all six summits.

“He was steadfast and he skied some big lines,” said Don Scharfe, owner of Rocky Mountain Outfitters in downtown Kalispell, a nerve center for mountaineering lore and gossip. “Based on what I know from owning the store for the last 36 years, I have a feeling that Andy got this one.”

Asked whether he has any other mountaineering goals on the horizon, Zimet replies confidently.