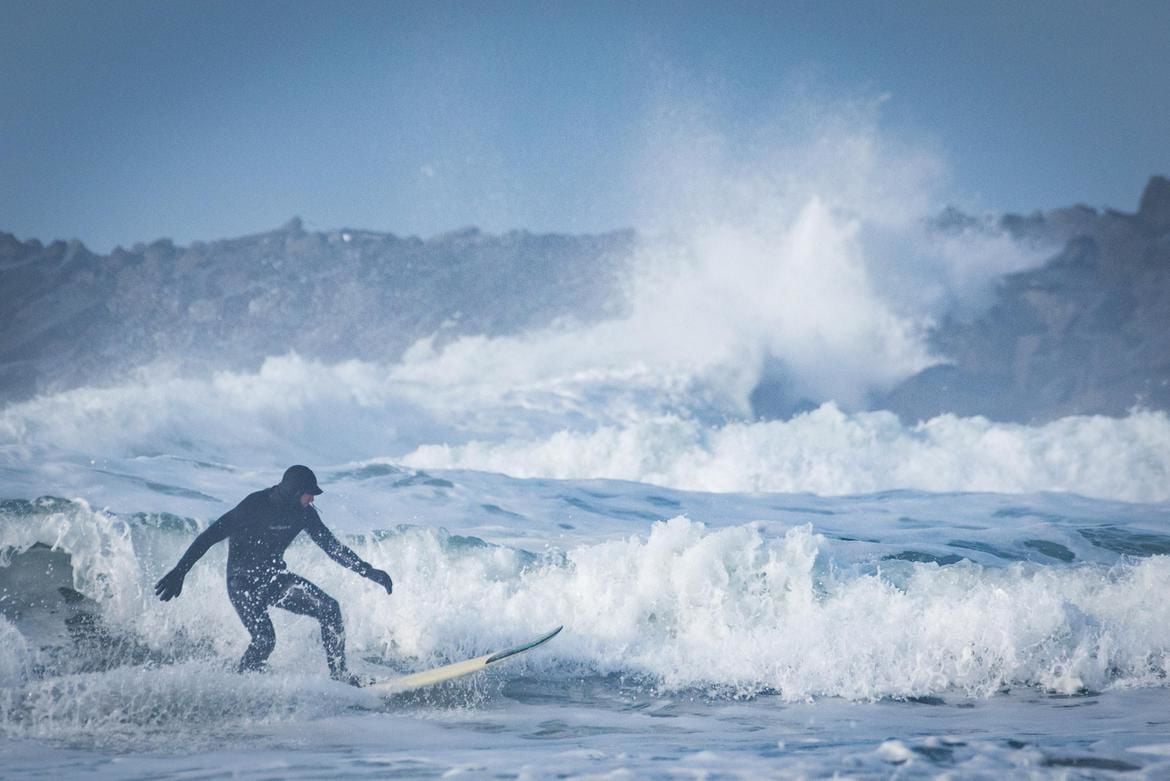 A surfer rides a wave on Nov. 24, 2019, near Westport, Washington. Washington’s coast, while not as famous as other surfing spots, is known for the consistency and reliability of its waves. 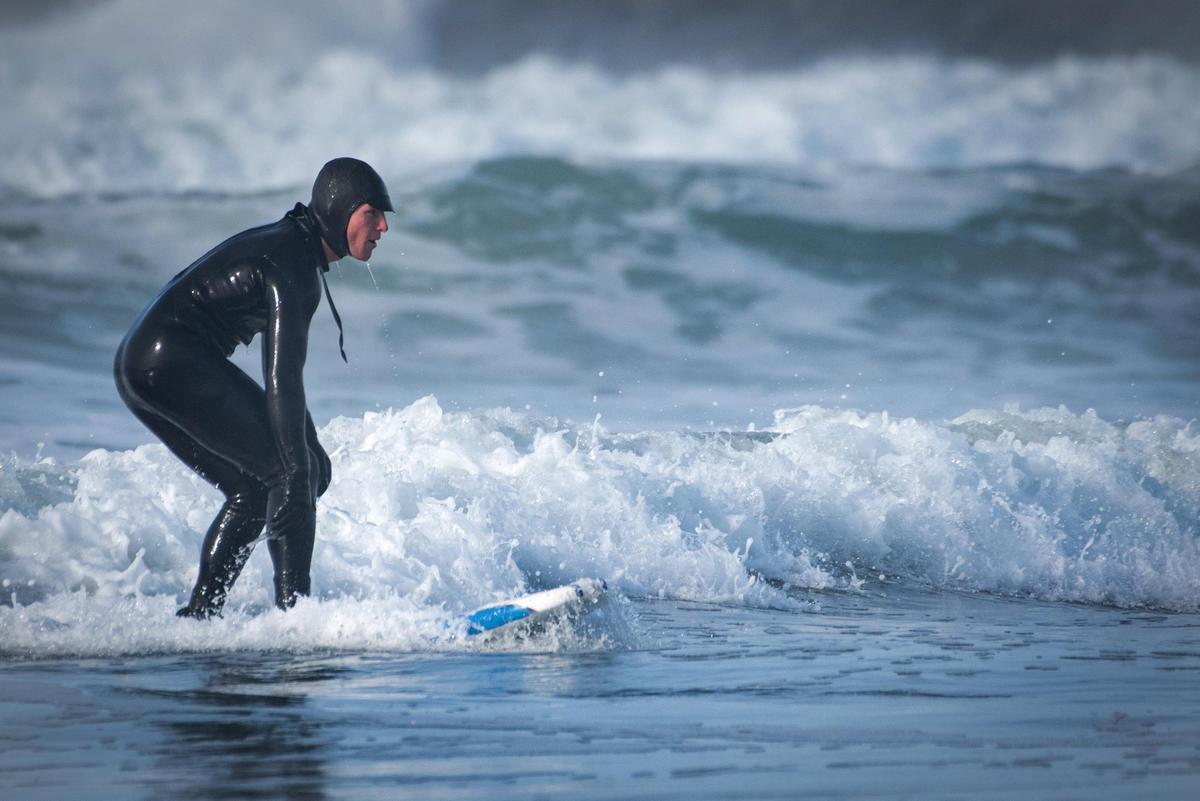 Kyle Breeding surfs on Nov. 24 near Westport, Washington. Although the winter air is biting, the water temperature remains more or less the same year-round. With the right gear surfing is possible most of the year at Westport.

A surfer rides a wave on Nov. 24, 2019, near Westport, Washington. Washington’s coast, while not as famous as other surfing spots, is known for the consistency and reliability of its waves.

Kyle Breeding surfs on Nov. 24 near Westport, Washington. Although the winter air is biting, the water temperature remains more or less the same year-round. With the right gear surfing is possible most of the year at Westport.

That was my reaction when I was invited to go surfing in mid-November.

Surfing, in my mind, is a SoCal experience: sun-bleached sands and flip flops. Not Washington’s dreary and drizzly winter coastline.

While the weather is worse, of course, with the proper gear surfing in Washington is a year-round activity. Plus, by going in the winter, you avoid the crowds flocking to Washington’s most popular surf spots during the summer.

While it’s certainly not a day trip for people in Spokane, it is a doable weekend adventure.

“We get a lot of people who come here from Spokane and surf,” said Al Perlee, the owner of Surf Shop in Westport. “I would say almost as many come from the Spokane area as the Seattle area. The road warriors.”

In mid-November, friends and I traveled to Westport for the weekend (Westport, for reference, is west of Olympia). It’s a long drive and we got a late start, arriving near midnight at the Airbnb we rented.

In the morning we motored to the Surf Shop, which Perlee opened in 1983.

We weren’t optimistic after checking the ocean conditions that morning. The waves were between 10 and 15 feet tall, way too big for our skill levels.

At the Surf Shop a friendly employee encouraged us to go look at the ocean and decide how to proceed based on what we saw versus what the screens of our phones were telling us. Smart.

We drove the five minutes to the Westport Light State Park and were reassured.

While there were indeed gigantic — and completely intimidating — waves farther out, they were breaking far from the shore. Smaller broken waves marched steadily landward.

We traveled back to The Surf Shop.

During the winter, water temperatures hover somewhere in the high 40s, Perlee said. In the summer it’s closer to 60 degrees.

“Warm may not be the word,” he said. “But definitely doable. People surf year round here.”

At the Surf Shop we rented wetsuits, boots, gloves, a cap and a surfboard. That gear cost $30 for a day (plus tax).

By then it was nearly 11 a.m. We returned to the almost empty beach and walked to the water.

I hadn’t surfed for nearly three years at that point, and have never been a good surfer.

For an absolute beginner, surfing at Westport in the winter might not be the best introduction to the sport. Instead, take a lesson at Westport’s other surf shop, Steepwater Surf Shop.

But for someone with experience the day was perfect. The whitewater gave us plenty of chances to practice catching waves and standing up. The less-than-perfect weather (and waves) meant we didn’t have to worry about other surfers.

For me, one of the most stressful parts of surfing is the etiquette. Cutting off surfers who are waiting for a wave is, understandably, a sin.

The problem is, I’m not all that controlled when I surf. More than once I’ve inadvertently angered someone while frantically trying to keep my balance.

Having no one around meant there was one less variable to worry about.

Washington’s surfing scene has never been big, always in the shadow of places like California and Hawaii. But in terms of consistent, year-round waves, it holds its own. Westport, in particular, is known for its consistency, Perlee said.

When he moved to the small community 40 years ago from Santa Cruz, California, he said he stumbled into “the most consistent spot on the Washington coast.”

The Evergreen’s surf scene has grown, paralleling the growth of the sport everywhere. More people travel to Westport, mostly in the summer, to learn to surf, Perlee said. He estimated on a busy summer day there could be as many as 800 cars at the state park.

Flying under the radar comes with some benefits, Perlee said.

“One of the beauties of this state is that it’s all out there to be discovered,” he said. “There are waves scattered all off our coast. The area is rich with waves. Go discover. It’s out there.”

On Sunday, we traveled back to the ocean, finding nearly identical waves but a transformed environment. Instead of clouds and drizzle, the sky was clear and the sun bright. Being in the ocean in the winter and yet bathed in sun is not something I will soon forget.

We surfed until we couldn’t move our arms and then drove home.

Distance: About 380 miles and more than a six-hour drive from Spokane.

Directions: From Spokane, take I-90 west through Moses Lake, Ellensburg and over the Snoqualmie Pass, After passing through North Bend, take Exit 25 for WA-18 W toward Auburn/Tacoma. From there, get onto I-5 South and take Exit 104 for U.S. 1010 N toward Aberdeen/Port Angleles. After driving through Aberdeen follow signs for Westport.

Google Maps has accurate directions, too.

Info: For information on ocean conditions visit the National Oceanic and Atmospheric Administration’s website or magicseaweed.com. You can also call one of the surf shops.