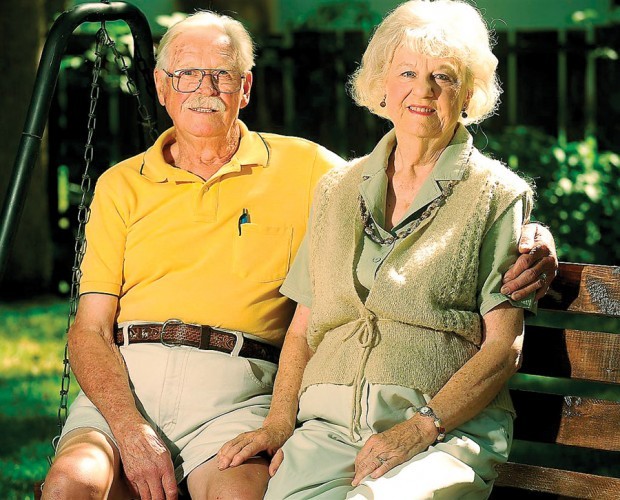 Billings residents Vic and Doris Redinger were fishing on Hebgen Lake in 2005 when Doris hooked a fly rod. The recovery of the reel put the couple on a five-year odyssey to find its rightful owner. Photo by DAVID GRUBBS/Gazette Staff 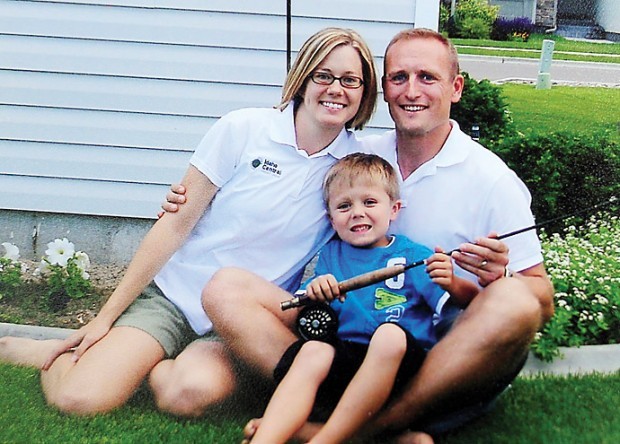 Steve Marshburn poses with his wife, Shannon, and son, Matthew, at their Chubbuck, Idaho, home with the fly rod and reel that Doris Redinger reeled in from the depths of Hebgen Lake. Photo by DAVID GRUBBS/Gazette Staff
By BRETT FRENCH Billings Gazette

BILLINGS - Steve Marshburn was helping his wife, Shannon, fix dinner in their Chubbuck, Idaho, home in May when the phone rang. His 5-year-old son Matthew rushed to answer, listened for a short while and then hung up. Marshburn figured it was a telemarketer.

When the phone rang again moments later, Marshburn picked up, noting that the caller ID recognized a Montana number.

Vic Redinger, 84, a retired Billings homebuilder, was on the other end of the line, hoping that his five-year quest might finally be at an end.

"The first thing I asked him was: ‘Are you a fisherman?' " Redinger recalled.

When Marshburn said yes, Redinger asked if he had ever fished at Montana's Hebgen Lake. Marshburn again answered in the affirmative, somewhat puzzled by the line of questioning.

"You better sit down," Redinger said.

It was the spring of 2005 when Marshburn traveled to Hebgen Lake to fish with his father and brother. An active duty Army Ranger at the time, Marshburn had recently received a brand-new Sage XP rod and an Abel No. 1 reel as a birthday present from his father.

"It was probably the nicest possession I had at that point in my life," he said.

The $1,000 setup included a black reel with his full name engraved across the side.

The rod seemed especially gifted as Marshburn quickly caught a 3-pound rainbow as he kicked his float tube out onto the lake. As he went to unhook the fly from the fish's mouth, he laid the new rod across his float tube. As soon as the fish was hooked onto the stringer, it thrashed and its tail knocked the rod off the tube. It quickly sank. Panicked, Marshburn grabbed the fly line and began pulling it in hand over hand, confident his rod would be on the other end. It wasn't. He was heartbroken.

"It was kind of a big loss at the time," he said. "I was pretty depressed that day."

Over the Fourth of July weekend that year, Redinger and his wife, Doris, were trolling on Hebgen in their small boat when Doris had what appeared to be a strike. When she began reeling it in, though, it didn't feel like a fish.

"We kept thinking it was a stick," Doris said. "It was kind of hard to get up."

As it turns out the stick was a fly rod and reel.

"It was only a single hook she was fishing with," recounted her husband. "The hook caught one of the eyelets in the middle of the rod. It was a million-to-one shot."

After boating the rod, Vic noticed the black reel was inscribed with a name.

When he got back home, Redinger searched the Internet for matching names, placing calls to men in North Carolina and Texas, but none had ever fished at Hebgen Lake. When he ran out of numbers to call, Redinger stored the rod and it was only mentioned as a fantastic fishing story.

He had offers to buy the top-of-the-line setup, but declined.

Then in May, while having dinner at his son Doug's, house, the story came up again. Doug suggested Redinger take a new look on the Internet to see if any more Steve Marshburns had popped up. To his surprise there were two, one of whom was living in Idaho.

Full of hope, Redinger placed the call. A boy answered and quickly hung up on him. He called again and Marshburn picked up the receiver.

"At first I thought it was a telemarketer," Marshburn said. "But when he started asking more specific questions, my mind flashed to that rod and that day. I thought, ‘I will not believe you if you tell me you've found my rod.' It was just shocking. I was completely floored that had happened."

Redinger gladly shipped the rod to Marshburn along with a photo of him and his wife holding the rod and reel. In response, Marshburn wrote a three-page letter titled "The Heart of a True Fisherman" in which he extolled Redinger for his persistence in returning the rod to its owner. In the thank you he included a photo of him, his wife and son holding the returned rod.

In the letter, Marshburn wrote: "The whole experience is less about fishing and more about the character of our fishing mates." He went on to write: "Because of Vic's undying determination, I now look at (the day I lost the rod) with a different set of eyes. It is a day that gave me the fortune of speaking with Vic Redinger, an honorable fisherman from Montana who followed his heart because of his true love for fishing."

The tribute choked up Redinger when he read it.

"It kinda made me tear up because he made me sound like a saint," Redinger said. "I was so happy because this guy was in the Army. That's why he didn't have a permanent address. It's just one of those flukes."

Every year since losing the rod, Marshburn, now 31, has received a tether to attach his rod to his float tube as a birthday gift.

"I definitely use those safety features now," he said.

But who would have thought he would be so grateful to receive the same birthday present as a gift twice.

"It's kind of an amazing story," he said.

Billings Gazette outdoors editor Brett French can be reached at (406) 657-1387 or at french@billingsgazette.com.

Home renovation must-do’s to add value to your home

Kitchen items you should buy while thrift shopping

Kitchen items you should buy while thrift shopping

Billings residents Vic and Doris Redinger were fishing on Hebgen Lake in 2005 when Doris hooked a fly rod. The recovery of the reel put the couple on a five-year odyssey to find its rightful owner. Photo by DAVID GRUBBS/Gazette Staff

Steve Marshburn poses with his wife, Shannon, and son, Matthew, at their Chubbuck, Idaho, home with the fly rod and reel that Doris Redinger reeled in from the depths of Hebgen Lake. Photo by DAVID GRUBBS/Gazette Staff
© Copyright 2021 Missoulian, 500 S. Higgins Missoula, MT | Terms of Use | Privacy Policy
Powered by BLOX Content Management System from TownNews.com.
You don't have any notifications.