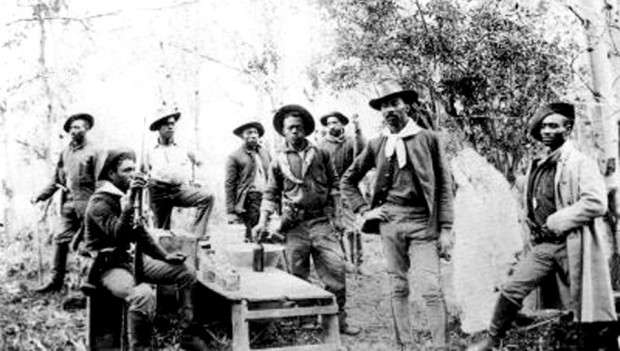 These soldiers from the 10th Cavalry served as escorts to Gen. Wesley Merritt’s party. They are pictured here in 1894 having lunch at a recreation camp in St. Mary. 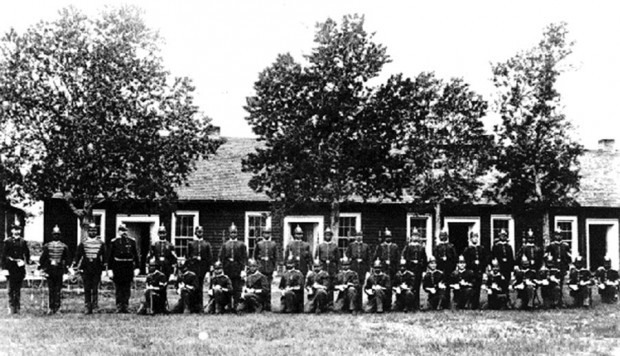 Led by Lt. George Ahern, Company B of the 25th Infantry, was among three companies that marched out of Fort Shaw on a reconaissance mission to Glacier National Park. The explorations by these segregated black soldiers included early navigations of Marias Pass, Two Medicine River and Cut Bank Creek. 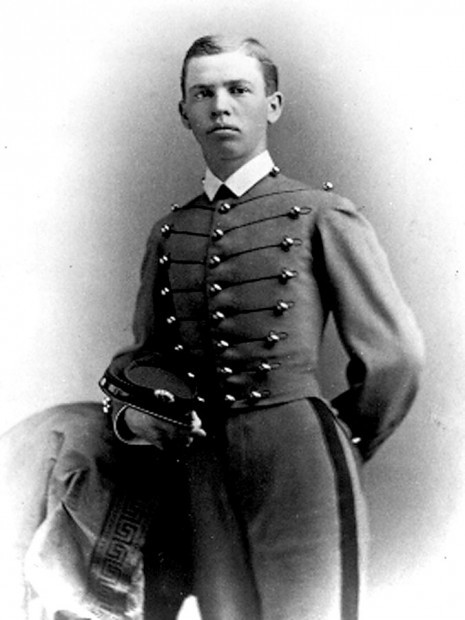 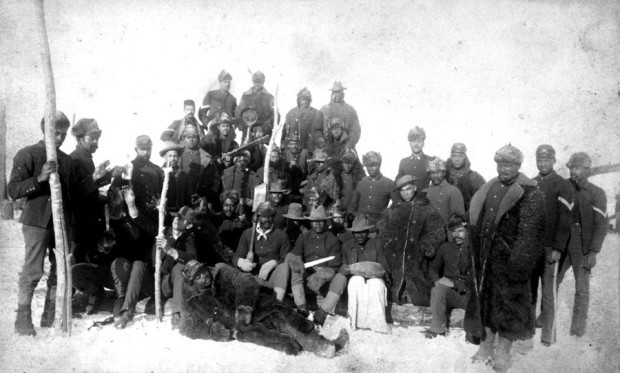 This regiment of Buffalo Soldiers was stationed at Fort Keough near Miles City. The black soldiers had a recreation camp at St. Mary on the edge of Glacier Park, where they helped keep order among the prospectors.

These soldiers from the 10th Cavalry served as escorts to Gen. Wesley Merritt’s party. They are pictured here in 1894 having lunch at a recreation camp in St. Mary.

Led by Lt. George Ahern, Company B of the 25th Infantry, was among three companies that marched out of Fort Shaw on a reconaissance mission to Glacier National Park. The explorations by these segregated black soldiers included early navigations of Marias Pass, Two Medicine River and Cut Bank Creek.

This regiment of Buffalo Soldiers was stationed at Fort Keough near Miles City. The black soldiers had a recreation camp at St. Mary on the edge of Glacier Park, where they helped keep order among the prospectors.

WEST GLACIER - An often overlooked aspect of Glacier National Park's history is that its earliest stewards were segregated black army regiments created during the Civil War and whose members came to be known as "Buffalo Soldiers."

"The African-American troops known as the Buffalo Soldiers played a central role in protecting our national parks. They were, in fact, our national parks' first guardians," said Alan Spears, a legislative representative for the National Parks Conservation Association.

Despite their prominent role in protecting the federal lands, a dearth of information exists about Buffalo Soldiers in the national parks, and earlier this year Spears helped lobby support for the regiments in the National Parks Study Act, which will help determine how the soldiers' story should be represented within the National Park System.

"These soldiers were in essence park rangers before there was a National Park Service. There was no one else to take care of these lands," Spears said. "It is one aspect of history where I think further exploration is needed. There is not a lot known about what it meant for these African-Americans and how they were received by the communities they were serving."

It is known that the black soldiers were active for more than two decades in the area that now includes Glacier National Park, and they marched out of Fort Shaw near Great Falls to conduct extensive reconnaissance missions that served as some of the first explorations of the wild and mountainous terrain.

They built roads and facilities, created maps, fought fires, made sure poachers weren't coming into the parks with guns, prevented illegal grazing and kept loggers from exploiting the parks, Spears said.

Soldiers from the 25th Infantry, referred to at the time as a "crack black regiment," were famously called in during the Great Fire of 1910 - the same year Glacier National Park was established - to fight the largest blazes.

On Aug. 15, weeks after becoming Glacier's first superintendent, William R. Logan called for the troops to be stationed at Lake McDonald, Nyack, Belton and Essex, where they battled the large fires in the region.

"It is generally agreed that Soldier Mountain in the portion of the park near Essex was named for the black troops that fought fires in that area," writes Jack Holterman in his historical essay "The Twenty-Fifth Infantry in Glacier Park Country."

The forest fires raged over 2,000 square miles of northern Idaho and western Montana and consumed more than 100,000 acres of park forests, killing 70 people and destroying timber worth $13 billion.

In a commendation letter for the soldiers assigned to his region, Logan wrote to the Secretary of the Interior: "I deem it only proper that I should call your attention to the splendid work done by the troops fighting fires in Glacier National Park last summer. I had one company of the 25th Infantry (colored) stationed in east Essex, under the command of 1st Lieutenant W.S. Mapes. I doubt if I can say enough in praise of Lieutenant Mapes and his negro troops. The work performed by them could not be improved upon by any class of men. To their lot fell the worst fire in the park and they went at its extinguishment with snap and energy, built roads and trails and miles and miles of fire guard trenches without the least sign of discontent. Personally, I believe that it is only fair to the officers and men of the U.S. Army who participated in the fire fighting in Glacier National Park, that you call the War Department's attention to the splendid work performed by them, as they certainly deserve commendation."

Their presence caused a stir in the nearby community of Essex, whose citizens "just looked on at the black troopers laboring after hours without support."

In Avery, Idaho, citizens were evacuated from the region by train, and soldiers who rode on the platforms of railroad cars carrying the panic-stricken residents also earned praise.

"They stuck to their posts like men," declared one forest ranger, according to the Holterman essay. "These negro soldiers stood on the platforms through this bath of fire and kept the doors closed, holding back the heat-crazed women and children, many of whom would have leaped off and been lost if they had not been restrained."

The soldiers became some of the earliest explorers of the region now known as Glacier National Park, "which was still unexplored by army men and was regarded by them as a lingering mystery," Holterman wrote, adding that the proximity to the U.S.-Canada border "had long been a notorious temptation to mischief-makers, poachers, whiskey-runners, rustlers and killers."

In 1889, under the command of Lt. George P. Ahern - the black regiments were almost always led by white officers - three companies of the 25th Infantry marched out of Fort Shaw for a reconnaissance mission. They reached Choteau on the second day and Sheep Creek near Dupuyer on the fourth day, covering roughly 100 miles by foot.

"From there they moved on to Birch Creek, Two Medicine River, Cut Bank Creek and a camp near Marias Pass, where they remained until September 17th engaged in military exercises. Then they about-faced and marched home the way they had come," according to Holterman. "Their maneuvers in this area occurred three months before John F. Stevens reconnoitered the pass for the railroad on December 11th, but they were black army men and Stevens was a white corporation man, so you know who gets the credits for the ‘discovery' or reconnoiter."

Later, the soldiers established a recreation camp at St. Mary on the edge of Glacier Park, maintaining order among "the prospectors and boomers or sooners who poured into the country as soon as it was opened to the whites," Holterman wrote.

Native Americans reportedly bestowed the nickname "Buffalo Soldiers" on the black troops with affection, likening the kinkiness of their hair to that of a buffalo. But early regiments, many of them former slaves, also conducted campaigns against tribes on the western frontier, particularly in the southwest states like Texas and Arizona, but including Montana.

"It is one of the ironies of American history that ... black soldiers had to earn their reputation as proficient troops by assisting in the suppression of [Native Americans] and by acting as strike breakers," wrote John H. Nankievell in his book "Buffalo Soldier Regiment: History of the Twenty-fifth United States Infantry, 1869-1926."

The relationship between the black soldiers and the Native Americans is complex, Spears said.

"Part of their job was to facilitate the westward expansion and to displace these Native Americans who had been there for thousands of years," Spears said. "What the history shows is that oftentimes you had men who were making their first transition from being former slaves into federal service, which came at the expense of the Native Americans."

One of the most important roles of the National Park Service is as a keeper of the nation's stories, history and culture, Spears said.

"It is not always a celebratory story, but it's a history of our culture," he said. "As we look at enhancing cultural diversity in the national parks, what I think is important about these stories is that the early American West was a far more diverse place than we originally believed. African Americans have always been in these parks and on these Western landscapes, far more than we knew."

In concluding his essay, Holterman acknowledges that biographical information on the individual Buffalo Soldiers is scarce but that they earned a reputation for being disciplined and dedicated to their service.

Superintendent Logan's commendation "may just as well be applied to other members of the Twenty-Fifth in their venture around Glacier Park, most of whom received similar praise from their officers but whose service has since been almost totally overlooked," Holterman wrote.