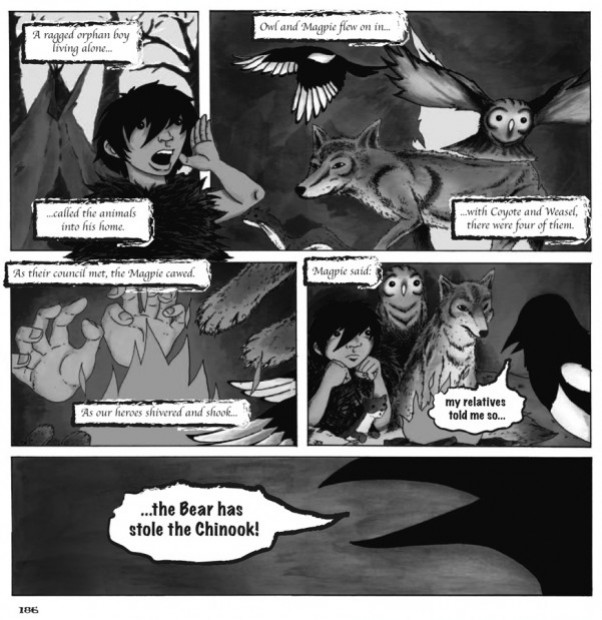 In “Trickster,” graphic artists teamed up with American Indian storytellers. In the panel above, Washington, D.C., artist Evan Keeling illustrates “The Bear Who Stole the Chinook,” by Blackfeet “poet-singer” Jack Gladstone. Illustration by Evan Keeling/Fulcrum Press 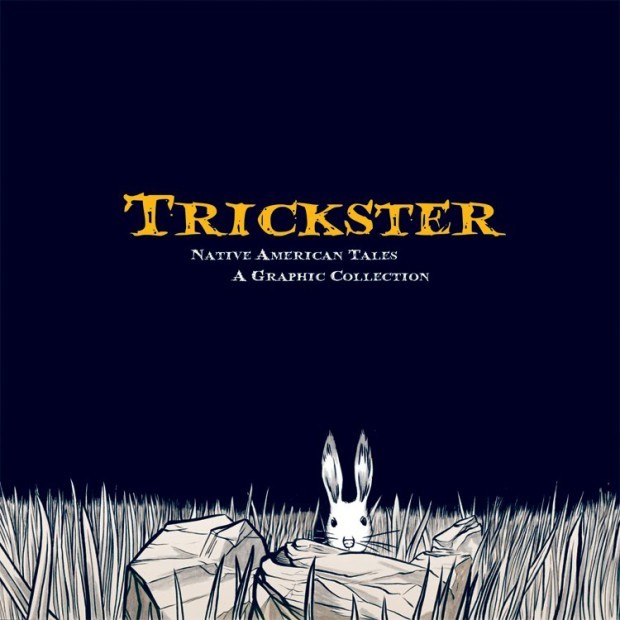 While Dembicki and his contributing artists have taken pains to respect the cultural integrity of the stories, their visuals never feel politically correct or preachy. Instead, reading this book creates the same excitement that discovering the Brothers Grimm or Italo Calvino's "Italian Folktales" does, only with pictures as well as words.

"Trickster" will appeal to graphic novel lovers, folklore enthusiasts, storytellers, young adult readers and everyone interested in the many American Indian cultures.

Whether coyote, rabbit, raven or man, a trickster is a slippery character to define, which is part of his power and appeal. He can be foolish, greedy, venal, impetuous and disruptive, wrecking both his schemes and the plans of others.

Unlike, for example, the greedy figures in Aesop's didactic fables, who always come to ruin, tricksters sometimes win, walking away with meat they didn't deserve, as in Yu'pik Eskimo tale-spinner John Active's "Raven the Trickster," illustrated by Jason Copland. This feels like the hard-earned wisdom of people who know that nature doesn't always play fair.

As many cultures acknowledge, the trickster is woven into the fabric of our world. Sometimes his actions have created our world.

In "Coyote and the Pebbles," told by Caddo Nation member Dayton Edmonds and illustrated by Micah Farritor, frantic Coyote trips at just the right moment to mess up the sculpting of light (i.e., placement of stars) in the sky, giving us the celestial hodgepodge we have now. In "Waynaboozhoo and the Geese," told by Anishinaabe language teacher Dan Jones of Minnesota and illustrated by Michael J. Auger, the young trickster's attempt to snare a flock of geese for supper results in an entertaining explanation of why the birds fly in a V pattern.

Rabbit stars so often as a trickster in these tales it makes me see Jimmy Carter's killer-rabbit incident with more sympathy. In "Rabbit and the Tug of War," he bests a pair of buffalo; in "Giddy Up, Wolfie," he vies for a gorgeous wolf bride; in "Rabbit's Choctaw Tail Tale," he learns a lesson about ice fishing the hard way.

For a reminder that we are not dipping into the Western Romantic tradition here, read Eirik Thorsgard's "When Coyote Decided to Get Married," illustrated by Rand Arrington. Coyote's search for a bride shares elements with Cinderella's story, but the story's chilling ending makes it unlikely that Disney will be calling for an option any time soon.

With anthology's mission of translating Indian tales into a new context, Blackfeet icon Jack Gladstone was a natural choice. In "The Bear Who Stole the Chinook," Washington, D.C., artist and Smithsonian Institute employee Evan Keeling illustrates Gladstone's song lyrics. His rhyming verses tell the tale of an orphan boy who teams with the Magpie, Coyote, Weasel and Owl to steal back the Chinook wind from the Bear.

From the cartoonish artwork of Jerry Carr and Pat Lewis to the arty realism of Farritor, the illustrators offer a pleasing variety of approaches, styles and color palettes. Special visual nods go to Cherokee artist Roy Boney Jr. for his painterly desertscapes in "Horned Toad Lady & Coyote," and Paul Zdepski's hallucinatory Hawaiian demons in "Puapualenalena, Wizard Dog of Waipi'o Valley."

Now in its 13th year, the Missoula Public Library’s annual writing contest — known as Missoula Writes — was a huge success in 2021. A total of…

In “Trickster,” graphic artists teamed up with American Indian storytellers. In the panel above, Washington, D.C., artist Evan Keeling illustrates “The Bear Who Stole the Chinook,” by Blackfeet “poet-singer” Jack Gladstone. Illustration by Evan Keeling/Fulcrum Press